Waiheke is a fairly large island off the coast of New Zealand, about a 45-minute ferry ride away. It’s known for its wineries, its beaches, and for being utterly beautiful. The Waiheke hike I did last year was one of the highlights of the trip, and at the risk of sounding either cheesy or hippie, it brought some much-needed healing of the soul.

So when a friend asked me if I wanted to join him and his brother for a cycling tour of Waiheke, I was keen. Never mind that I didn’t have a bicycle and that I in fact have not ridden a bicycle for nearly a year. What could possibly go wrong? 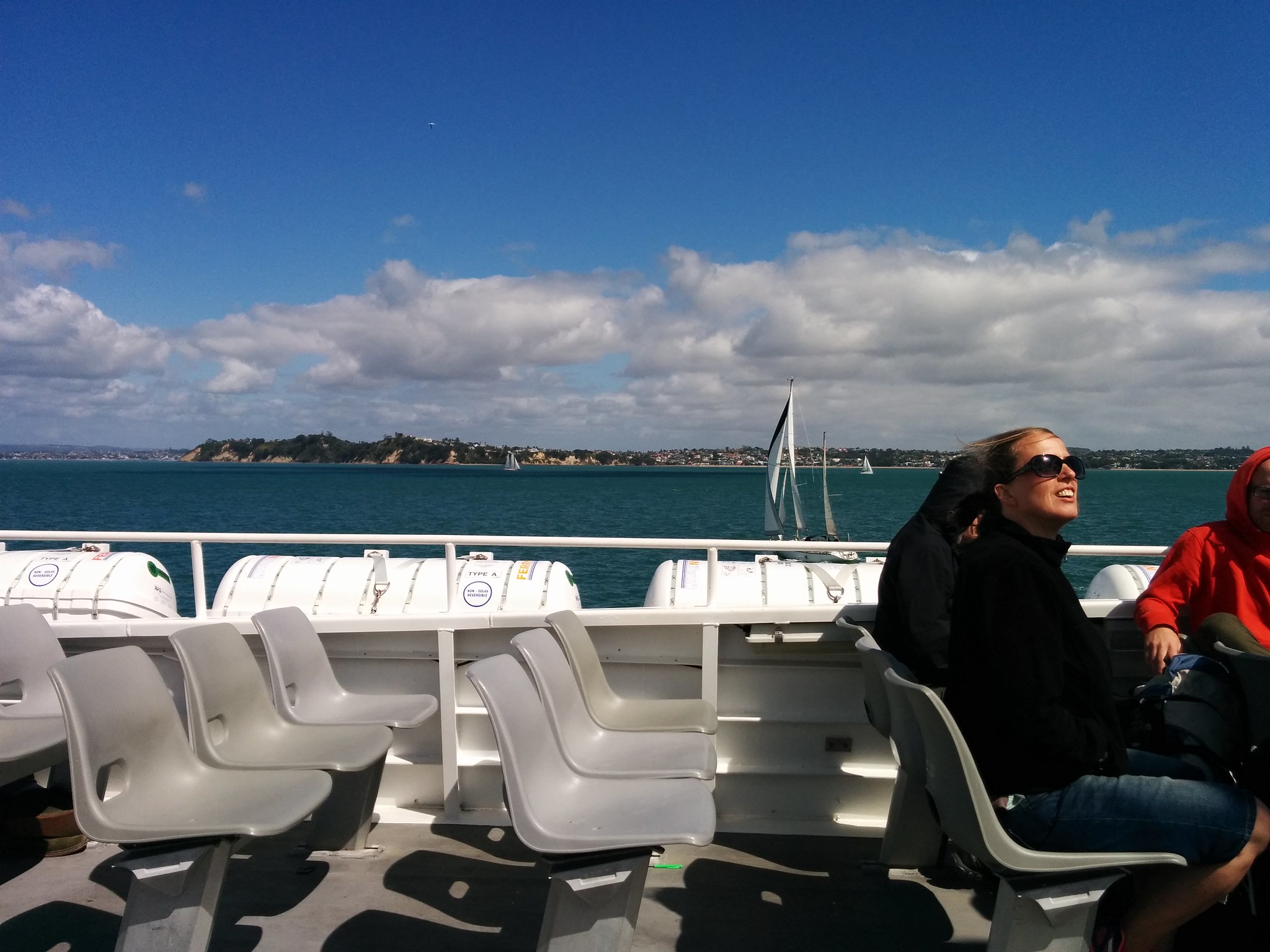 Lots, as it turned out. I rented a bike many sizes too small for me with extraordinarily dodgy brakes and the world’s least-comfortable seat. Add to that the exercise of muscles I had barely used for years, and it felt like a game of “the two young, fit guys wait for the old, fat guy to catch up”. My frequent lagging meant I didn’t get as many photos as I would have liked. But despite my abject incompetence, we did cover a quite a bit of ground and I greatly enjoyed the chance to see more of the island than I did last time on foot. So without further ado, let’s get to Waiheke. 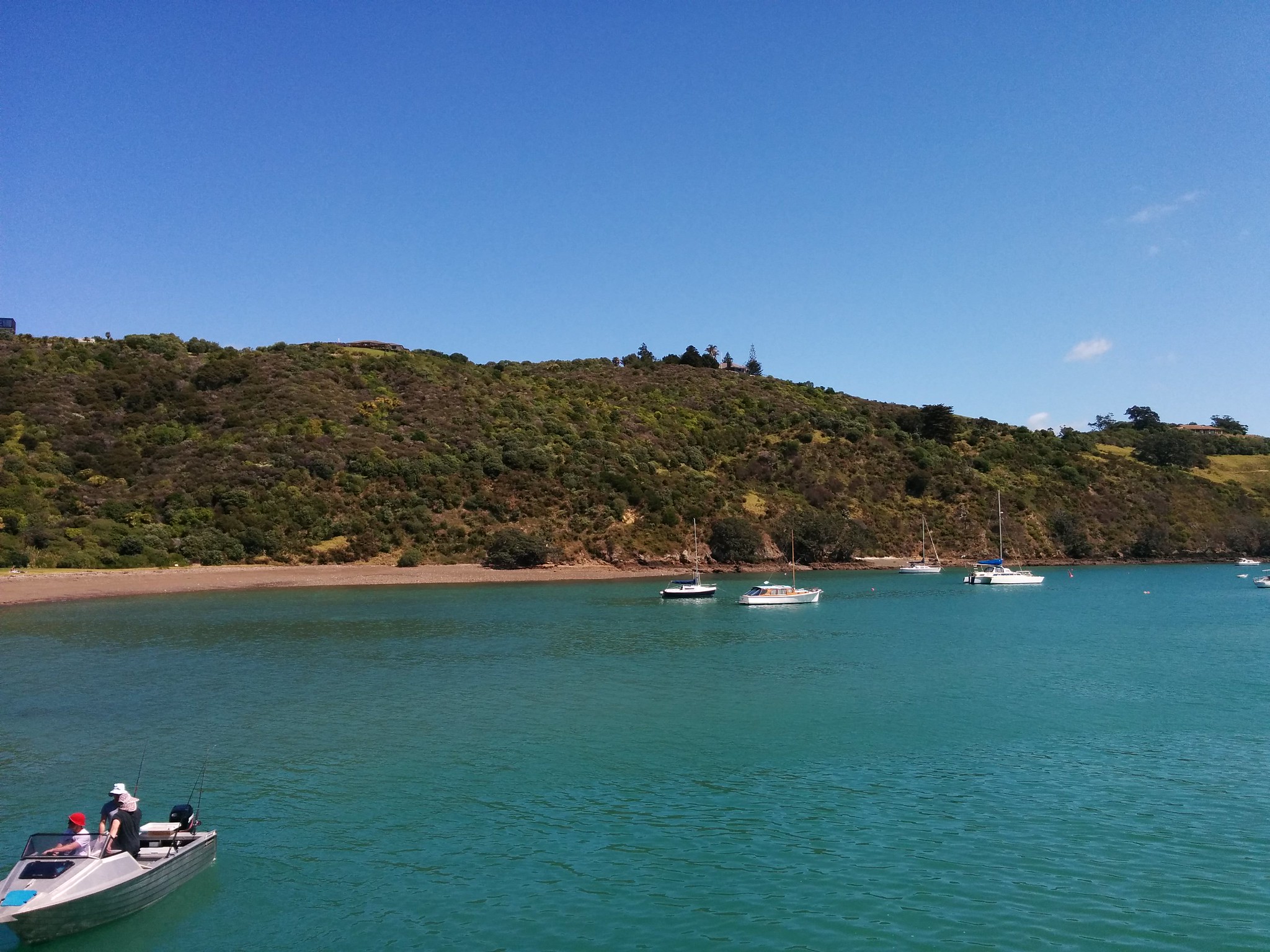 Pulling up to the ferry terminal, you see the lovely blue water and the rolling green hills. Two staples of Waiheke scenery! 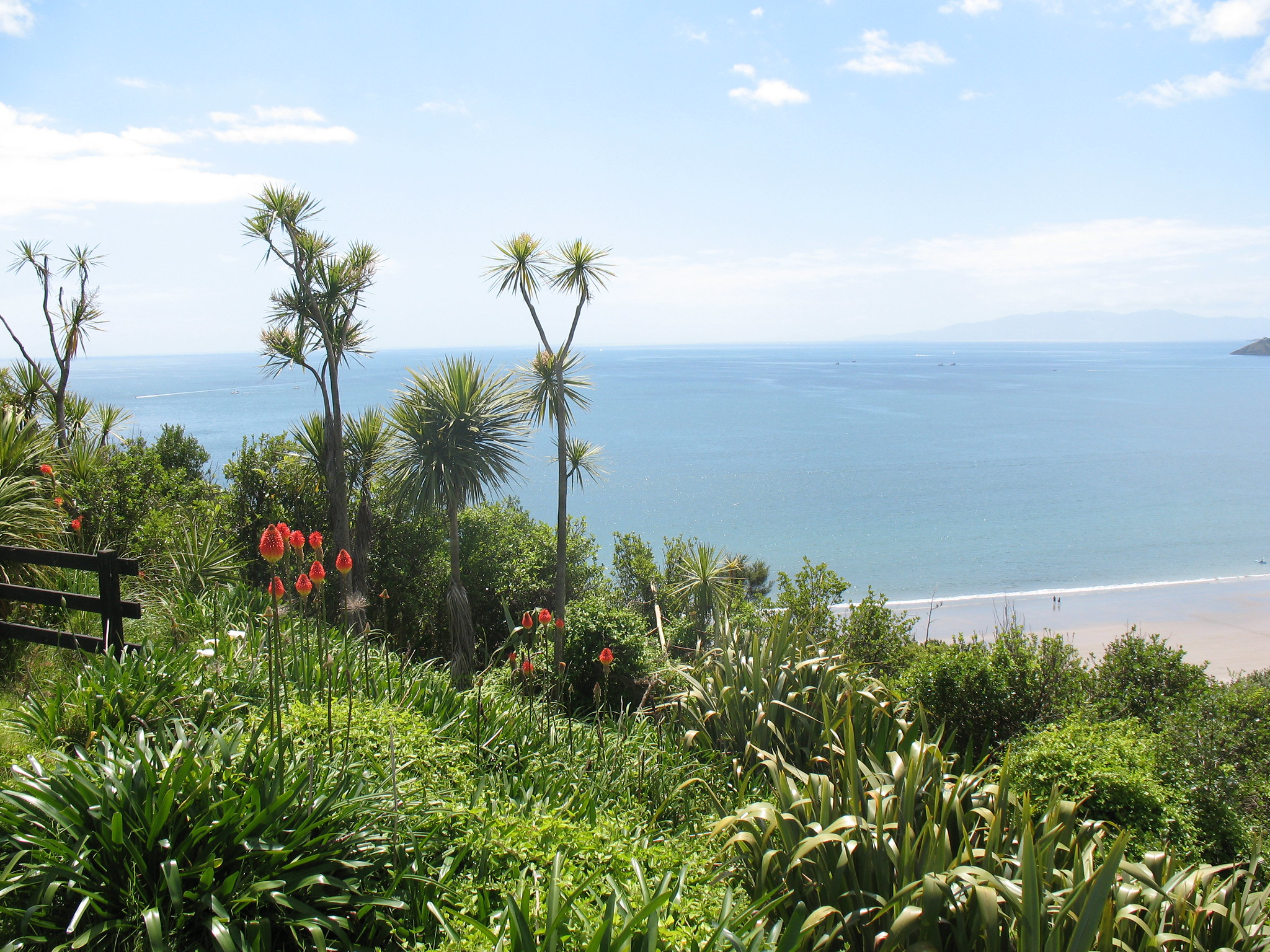 The road climbs quite quickly, as you will notice straight away if you’re on a bike, but the lovely views will hopefully distract you from the effort it took to get up there! 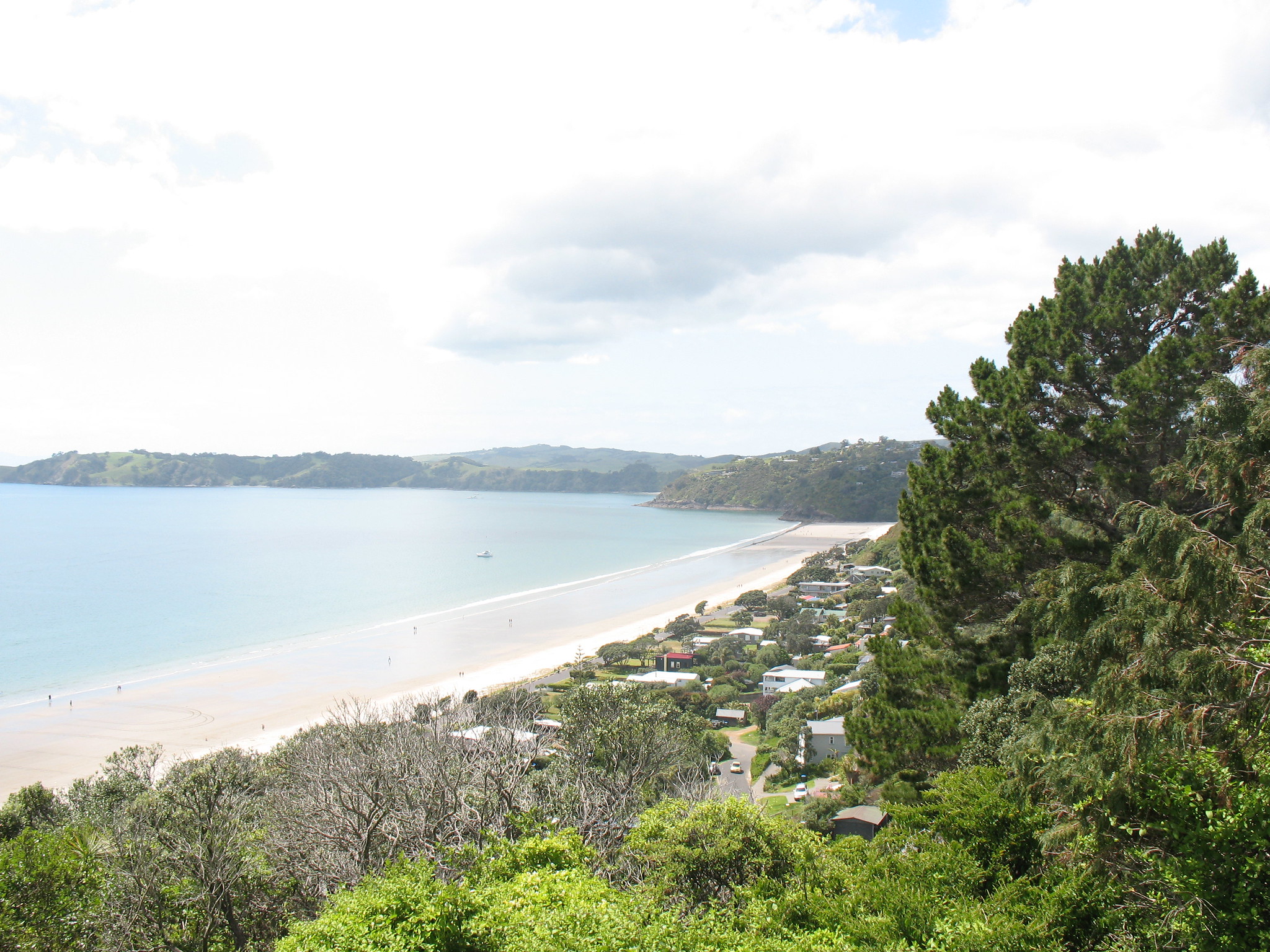 Wait…isn’t that…the beach we’re going to? Man, it would be a real shame if it turned out the brakes on my rental bike were completely dodgy!

Honestly, your best bet is to ignore my complaining and focus on the views, which are unquestionably spectacular. 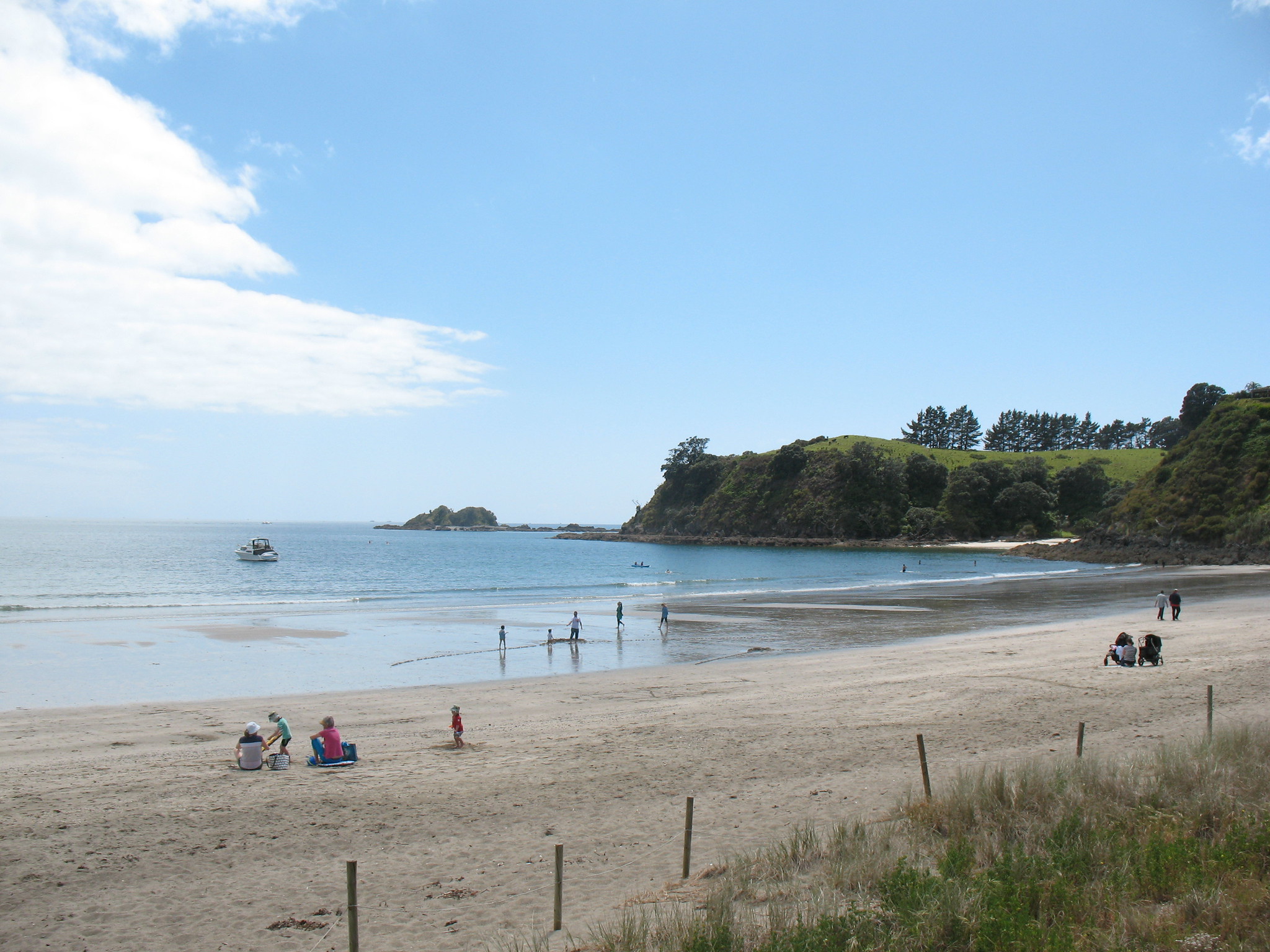 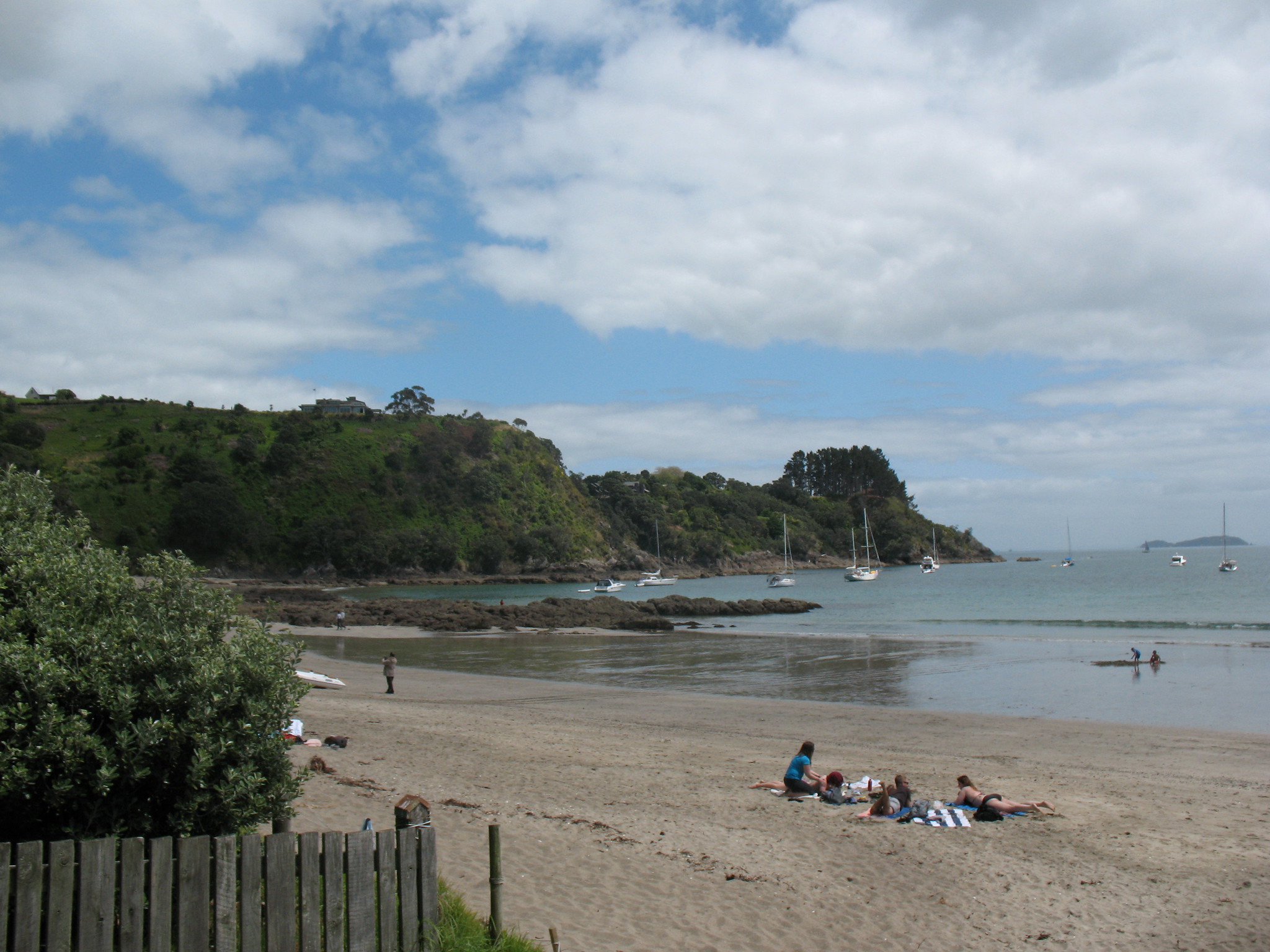 In this direction along the coast a couple of km is W Bay and Island Bay, two amazingly beautiful sites. They can really only be reached on foot, though, so we decided to press on across the island to the South. Which, unfortunately, means going back up all that elevation we just lost. Imagine my joy. 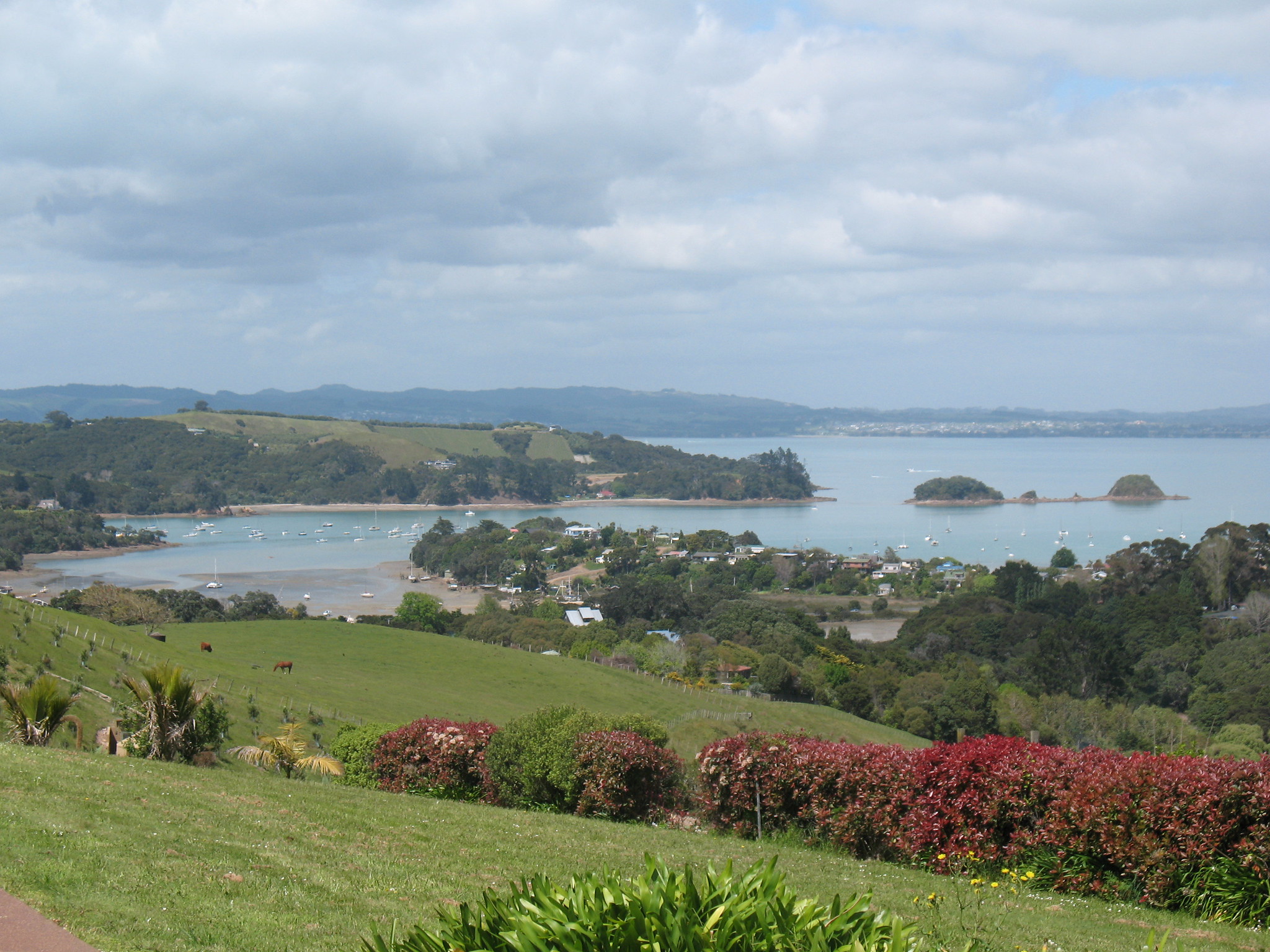 I will gladly suffer through cycling up a large hill to get views like this. That (unlike the previous beach photos) is actually the Southern shore of Waiheke, which is cool because I never saw that bit before. Even so, we probably only covered 1/5th or so of the island as a whole! 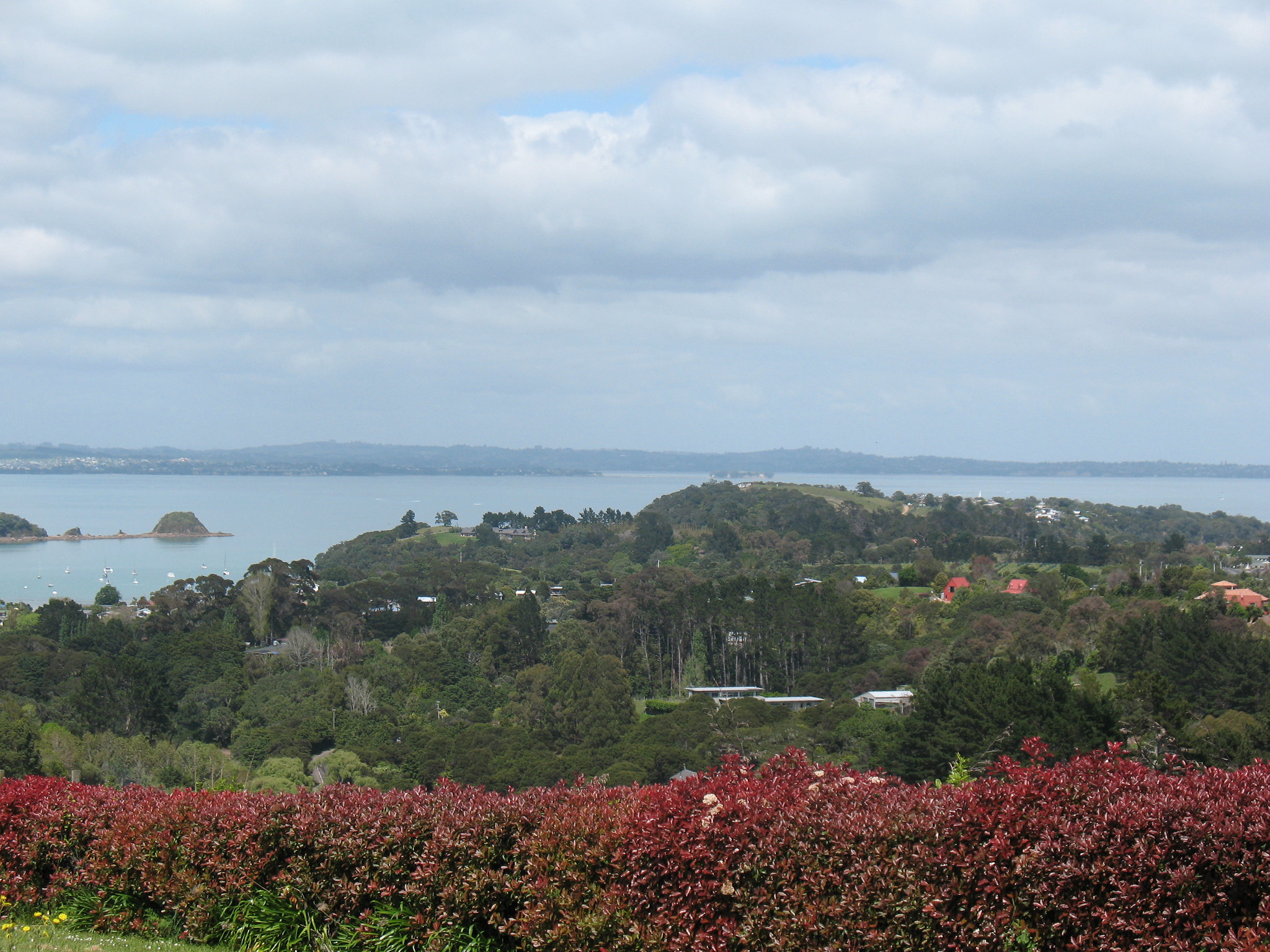 I love the way the red bushes sort of frame this photo along the bottom.

So that’s my quick trip to Waiheke. But you know, there’s a side benefit to taking a ferry trip. And that’s some fantastic photos of Rangitoto! 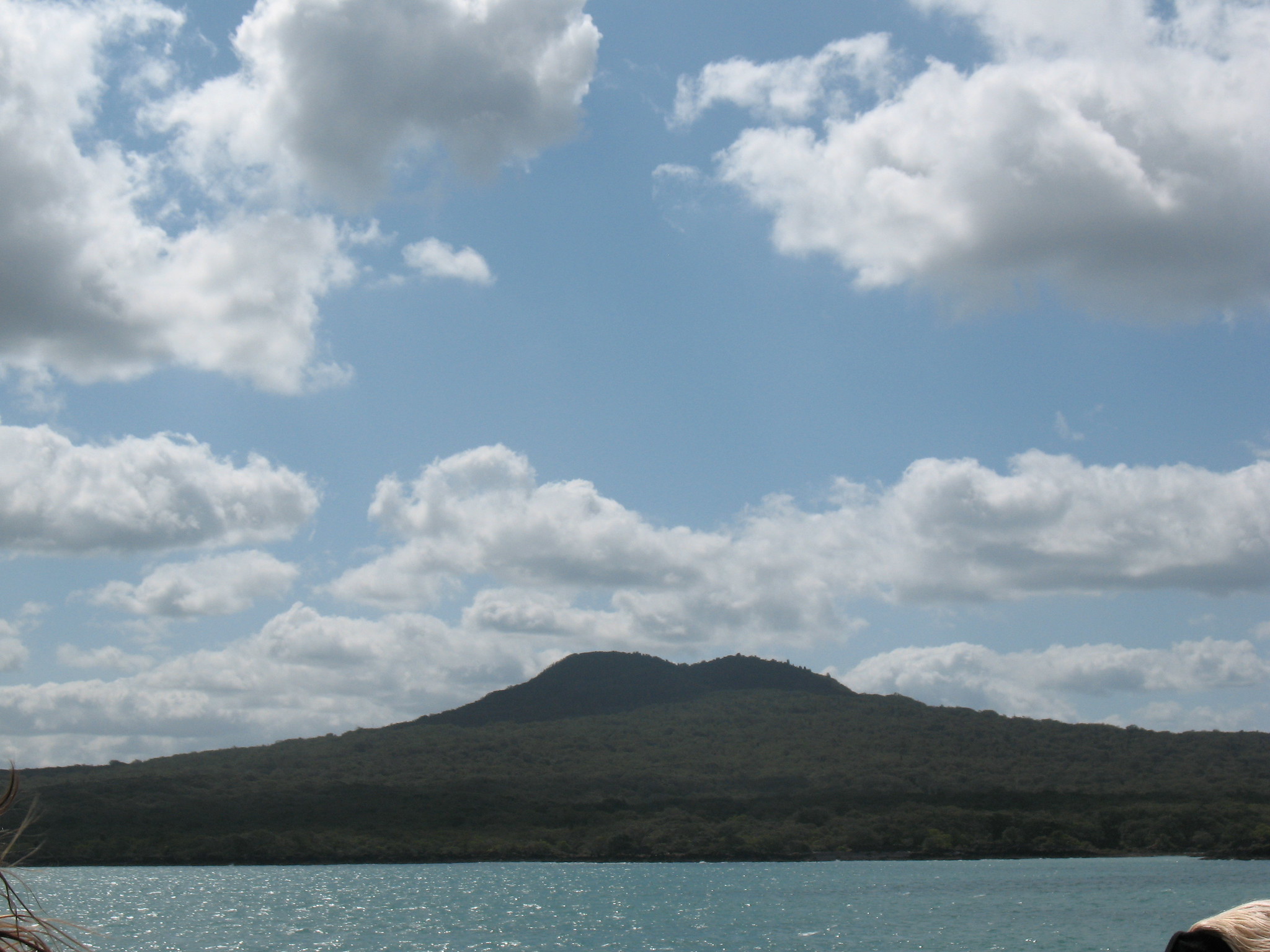 This one even stars a bonus cameo of some ladies’ hair.

And of course, Auckland looks good from a boat as well! 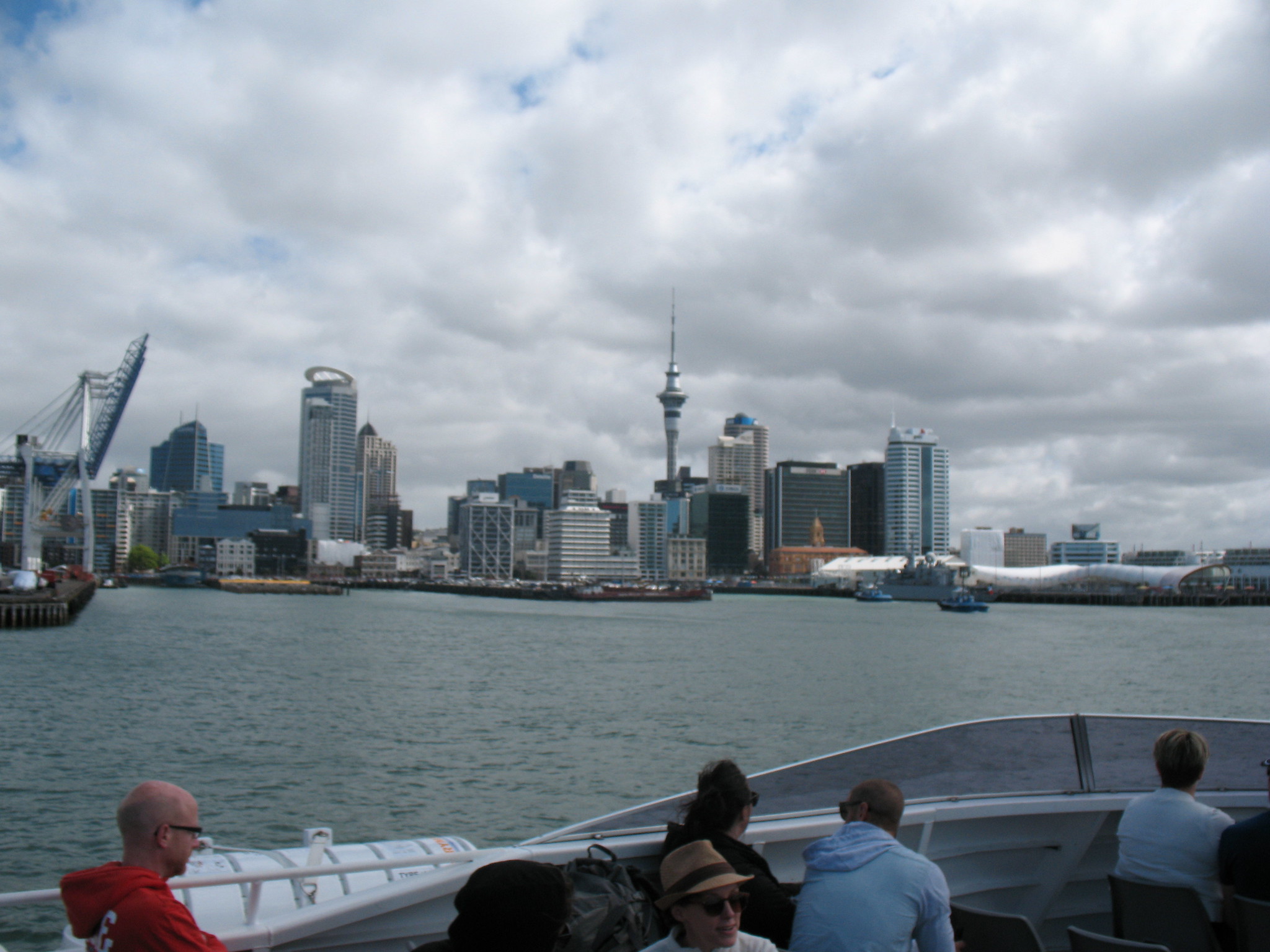 Let’s Zoom and Enhance, while of course still managing to keep someone’s hair in the frame: 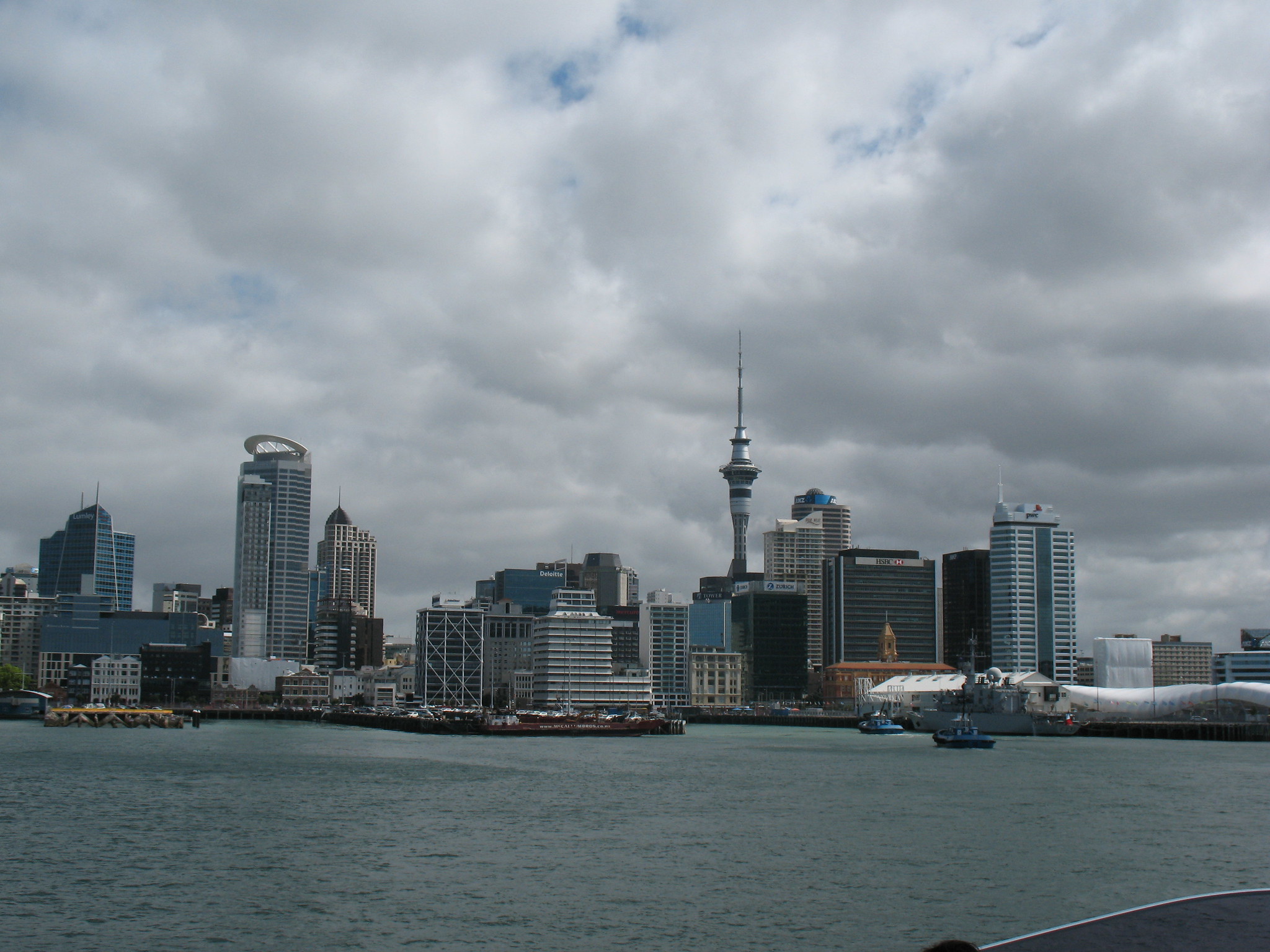 If you ever find yourself in New Zealand, you really owe it to yourself to make it out to Waiheke.

Come back next time where we see some signs, some stairs, some trees, and, oh yeah, an amazing waterfall.

One thought on “A quick glimpse at Waiheke”