When I first started this blog, I was very reluctant to call it a photo blog. Not just because I still slightly cringe at the pseudo-word “blog” but because I am not a photographer. I have nothing but the most rudimentary understanding of exposure, composition, framing, and all of the other technical aspects which make true photographers’ images stand out from the masses.

Even if I do acknowledge that this weblog which contains mostly photos is in fact a photo blog, I told myself I would never be one of those camera nuts who spends all his time talking about this lens and that camera. Not to mention, cameras and lenses are expensive! I definitely am not interested in yet another brutally costly hobby.

Anyway, for Christmas I bought a new camera. And now I’m going to tell you about it.

The camera is a Nikon D3300, an entry-level DSLR. I have two pretty basic lenses, one that goes from 18-55mm and one that goes from 55-200mm. For those unfamiliar with camera-speak, the first one (which I call the “small lens” even though it isn’t) is good for zoomed-out landscape photos and taking pictures of things and people up close. The second one (the “big lens”, even though it isn’t) zooms in way further than anything I have owned up until this point, though it’s far from being a telephoto lens.

Soon after purchasing it, I walked out to Mt. Eden to try it out. Note that I never retouch any of my photos, so this is all as it was produced by the camera. I was super interested to see how the same shot looks so different depending on the camera!

No camera of mine will be any good if it can’t take a good photograph of Auckland City. 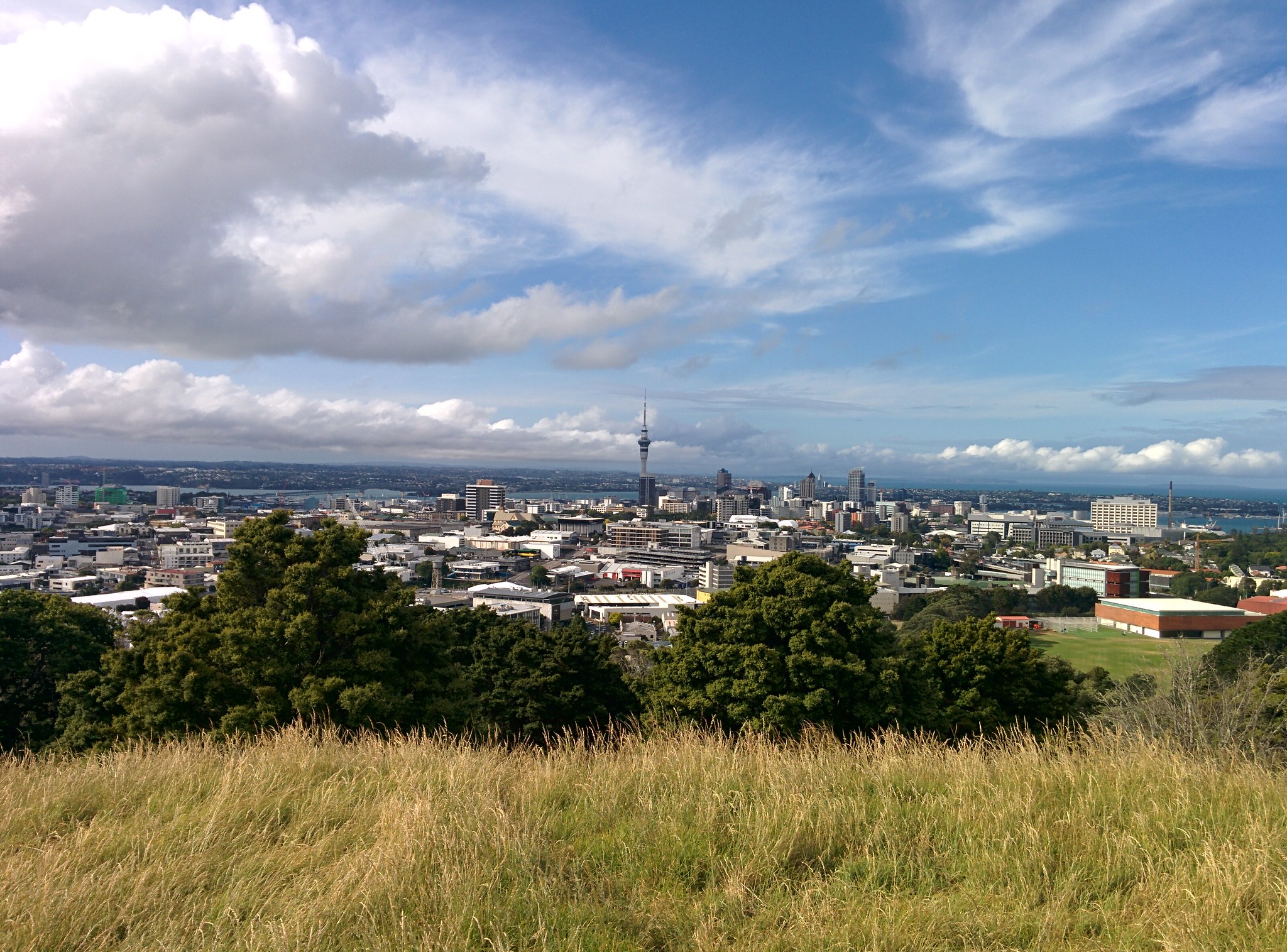 This is from my phone camera (an LG Nexus 5). With HDR+ on, the camera has done a great job of making the colors (the grass, the trees, the sky) pop. Not bad for a phone camera, but the subject (Auckland) is a bit lost in the landscape. Admittedly, New Zealand does have that effect on photographic subjects.

The image is 3200 x 2368 for a total of 7.5 megapixels. The focal length is 4mm, which I don’t believe is adjustable (I could be wrong, but I think all zooming from the phone camera is done in software). I did a lot of reading on the Internet (a.k.a. exhaustive research) about focal length and zoom ratios, and came away feeling just as ignorant as I was when I started. 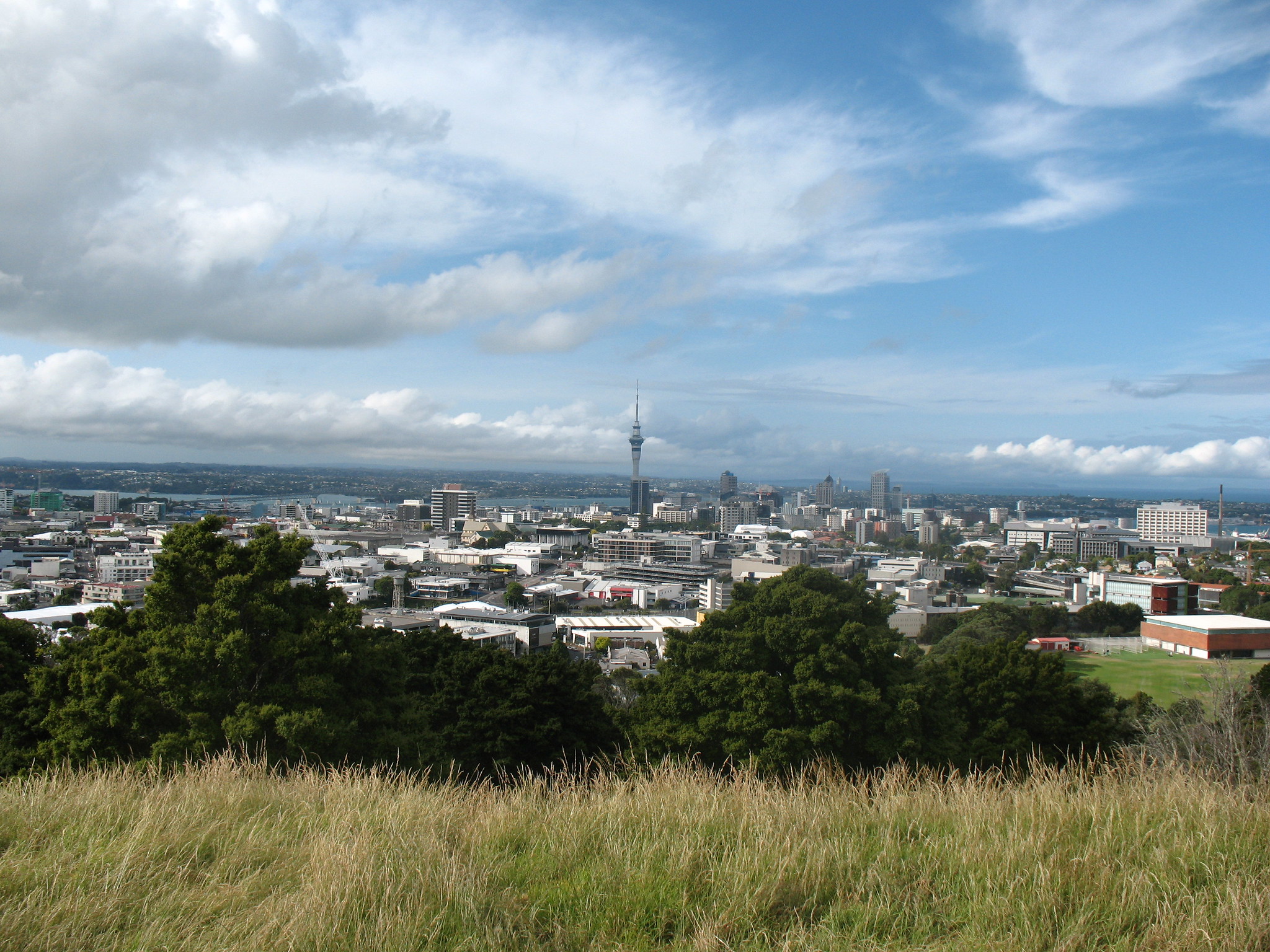 This is from my point-and-shoot, a Canon PowerShot A630. Without the benefit of HDR, this camera’s sensor just doesn’t do as solid a job of making the colors stand out. The focal length on the Canon when completely zoomed out is 7.3mm, so as one might expect the city is slightly larger in the frame here. Not by a lot, but I think it does help the composition a bit. Of course, a skilled photographer can compensate for these things.

The image is 3264 x 2448, for a total of nearly 8 megapixels. In the Canon’s defense, it’s been through quite a lot. It would not surprise me to learn that the image quality has degraded from new. 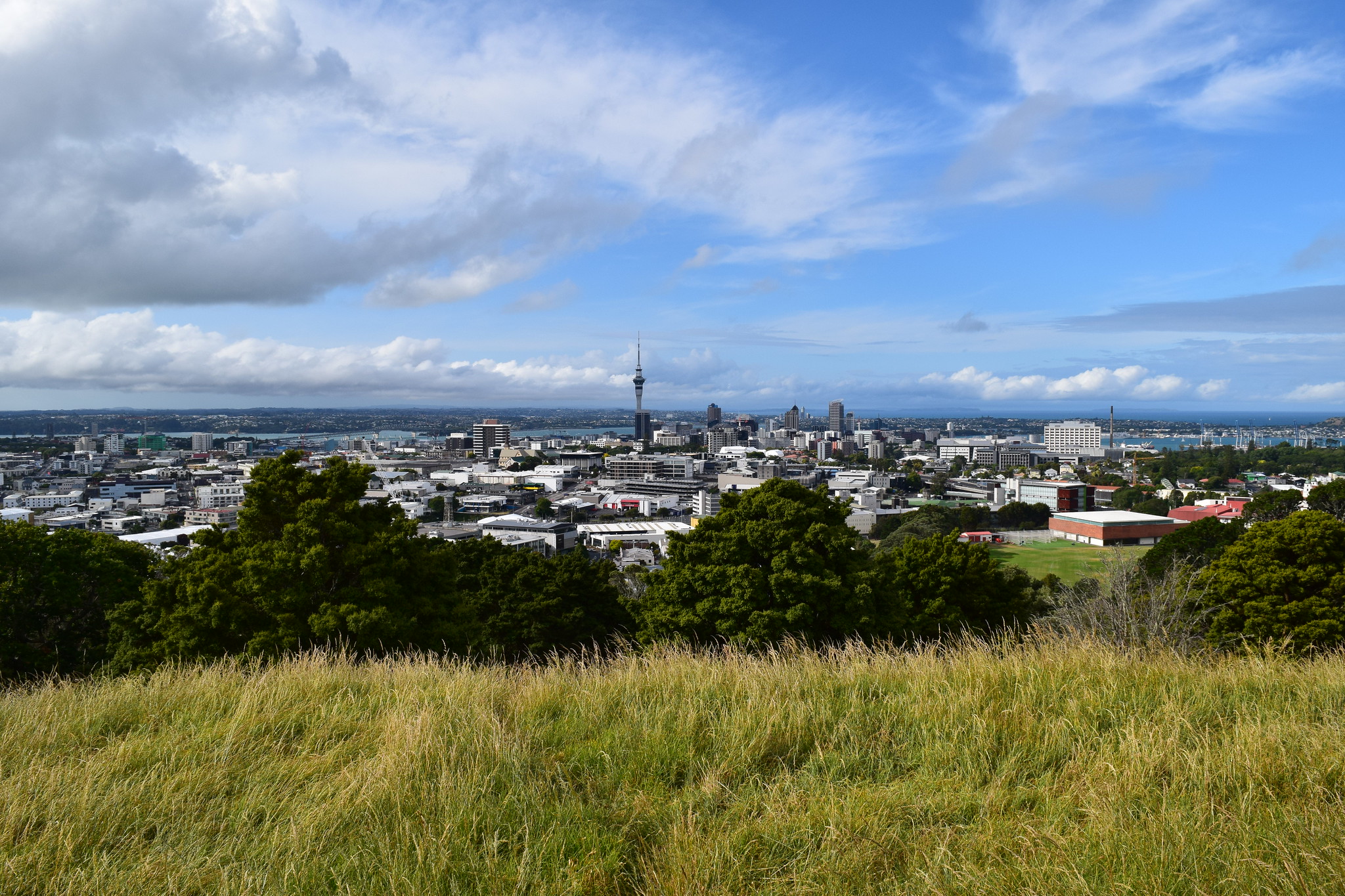 This is from the DSLR with the small lens.

It is way better than the murky colors on the Canon. It lacks the HDR feel of the Nexus camera’s, and the color temperature seems much cooler. The different aspect ratio of this sensor is also pretty apparent, since even though at 18mm this should be the most zoomed in of the three, it also captures more side detail. I really like the clarity of this picture.

Now to zoom in on Auckland’s most iconic structure: the Sky Tower. The phone camera did not participate in this test because its zoom is, as previously mentioned, terrible. I’m a horrible photographer, and even I know that digital zoom is pointless. You might as well fire up Microsoft Paint and draw a bitmap with your mouse of what you’re seeing. Just say no.

Also, I apologize in advance for the terrible job at centering the subject. Again, I am not a real photographer. 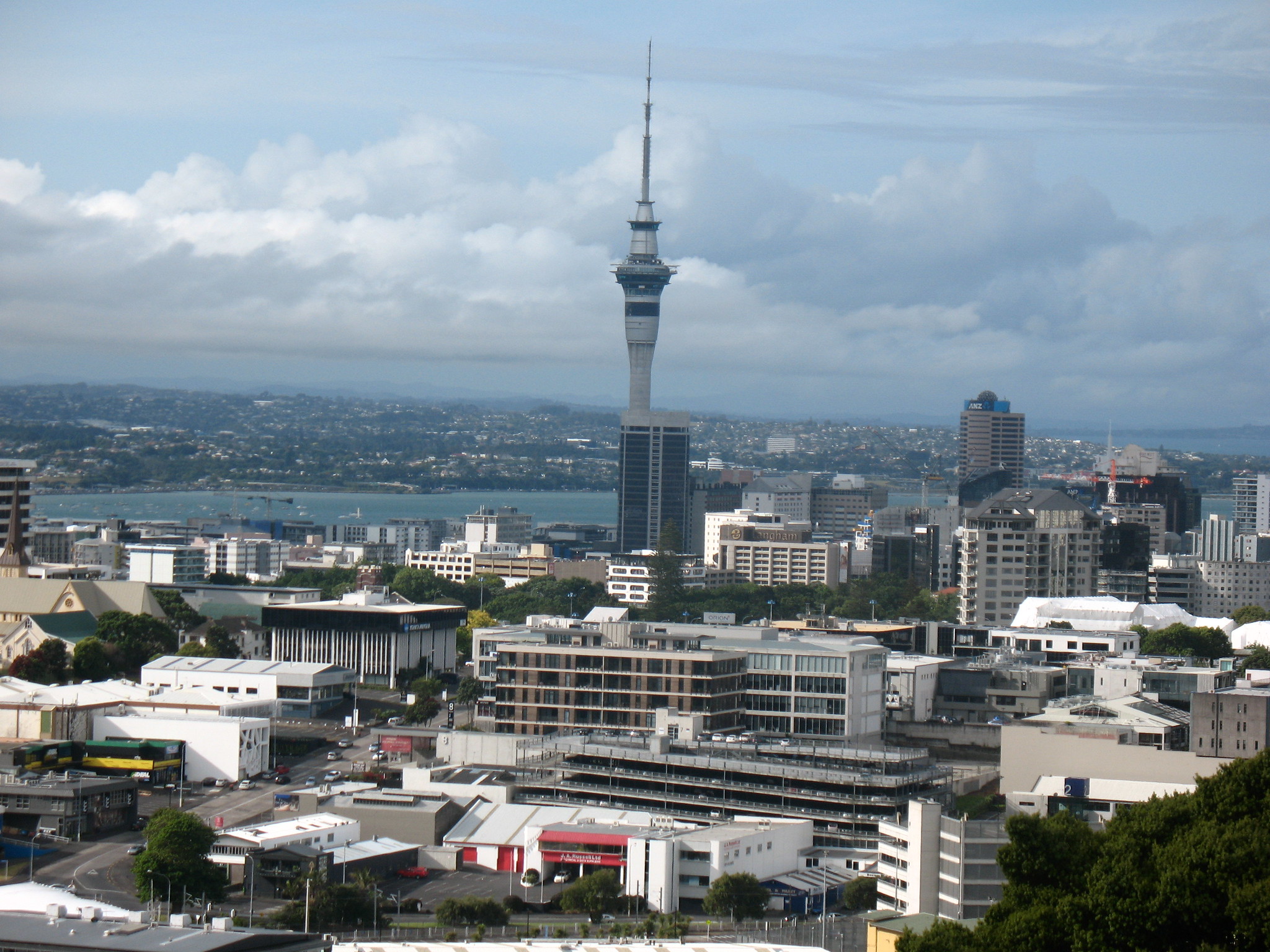 This is the Canon. Honestly, this photo makes me sad. The Canon is such a cheerful little camera, but at full zoom it just doesn’t do a very good job. You can barely make out the ANZ logo on the eponymous tower, and despite the blue in the sky this photo makes the weather look completely overcast. It’s all just muddled and murky and unfortunate. 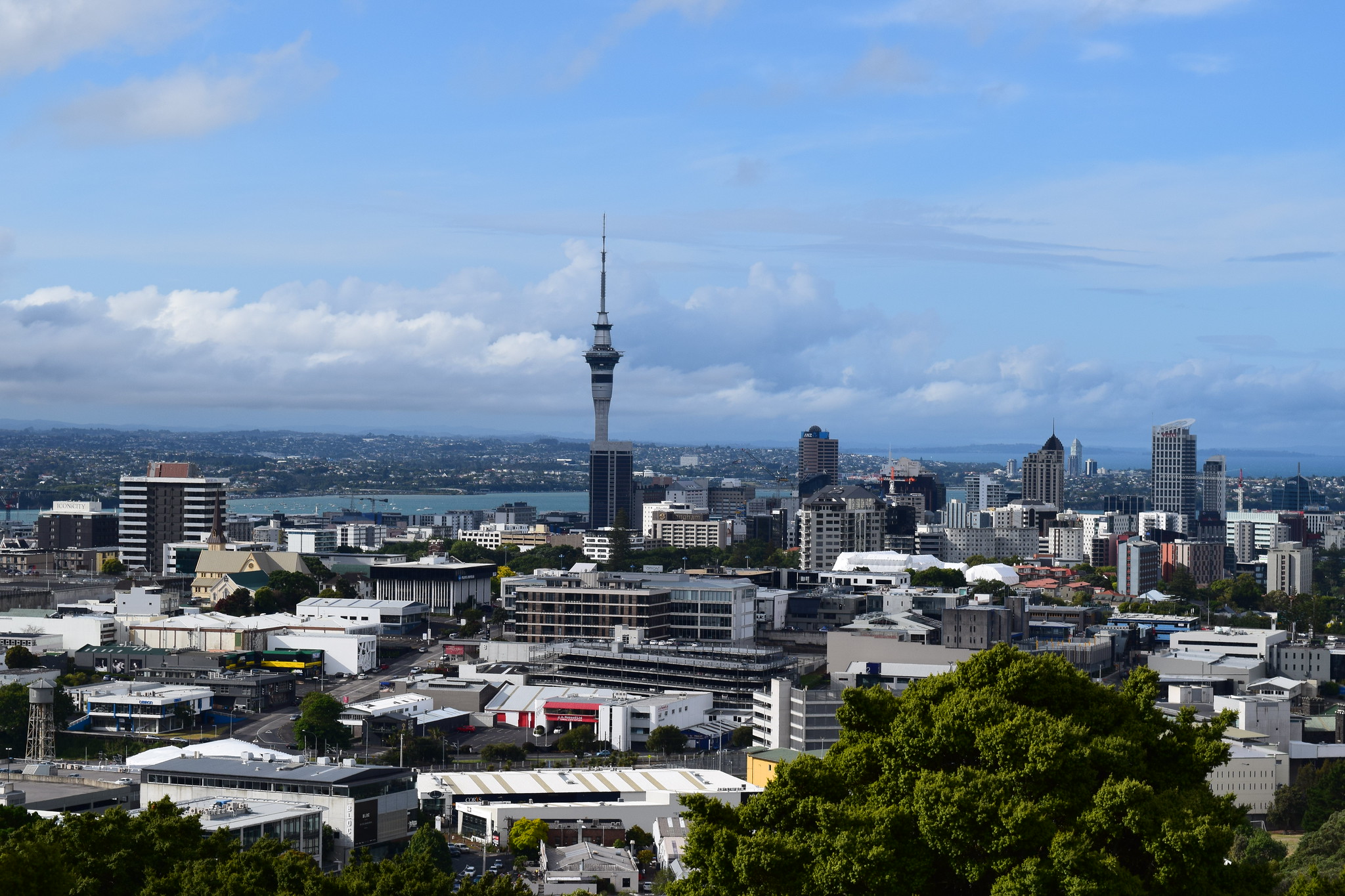 This is the small lens at full zoom (55mm). Definitely not as zoomed in as the Canon, but the quality difference is significant. 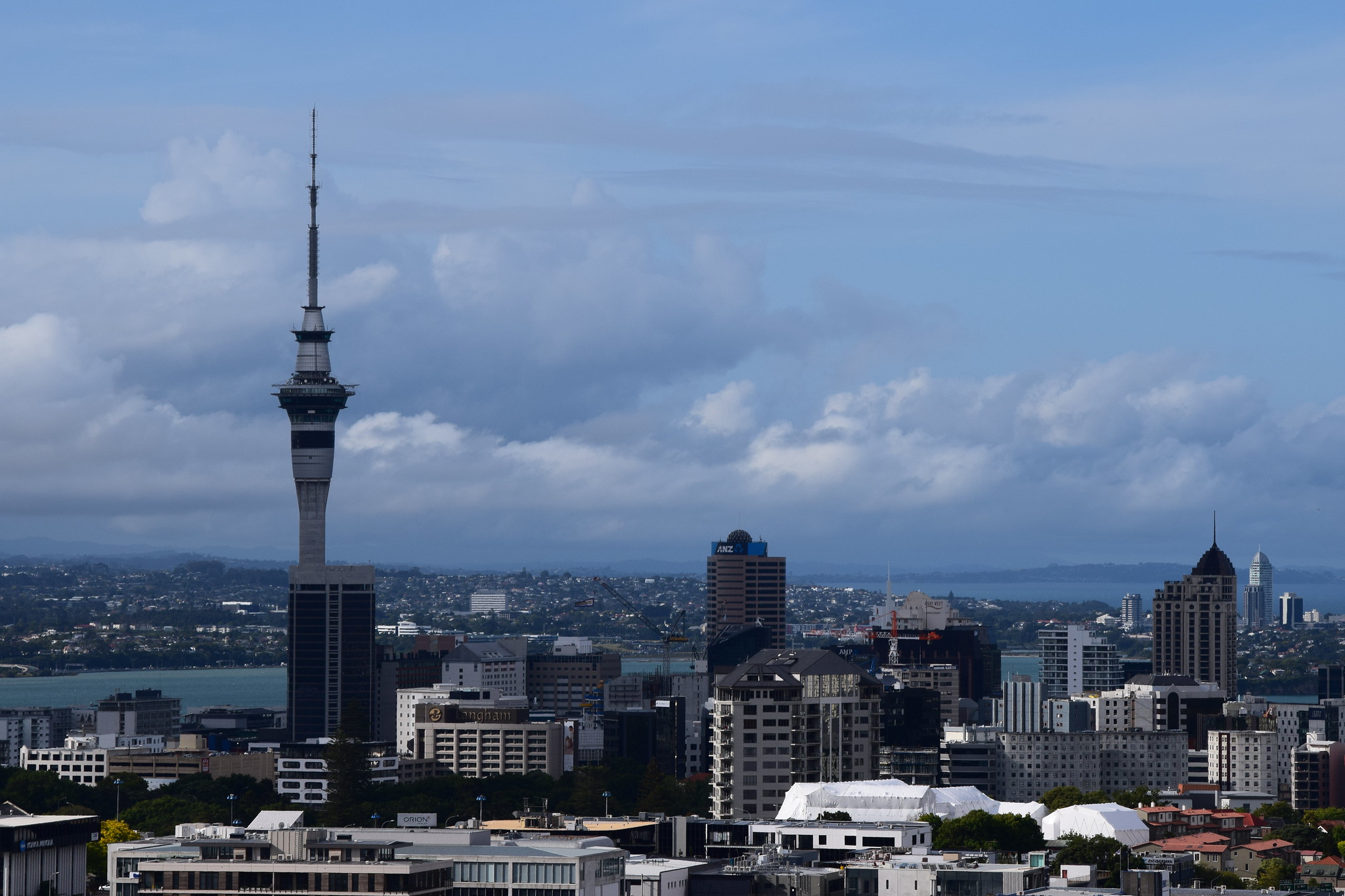 And here just for the lulz is the big lens zoomed in to 100mm, or about 1/3 of the way. Dusk is approaching so the sky is getting darker, though I also could have fixed the exposure to not be so dark. If I knew what I was doing, that is. Which I don’t, and I knew even less at that point (I have since messed with it and learned a few things).

OK, this is getting long and boring. Here’s a phew other photos I took with this camera to liven things up. 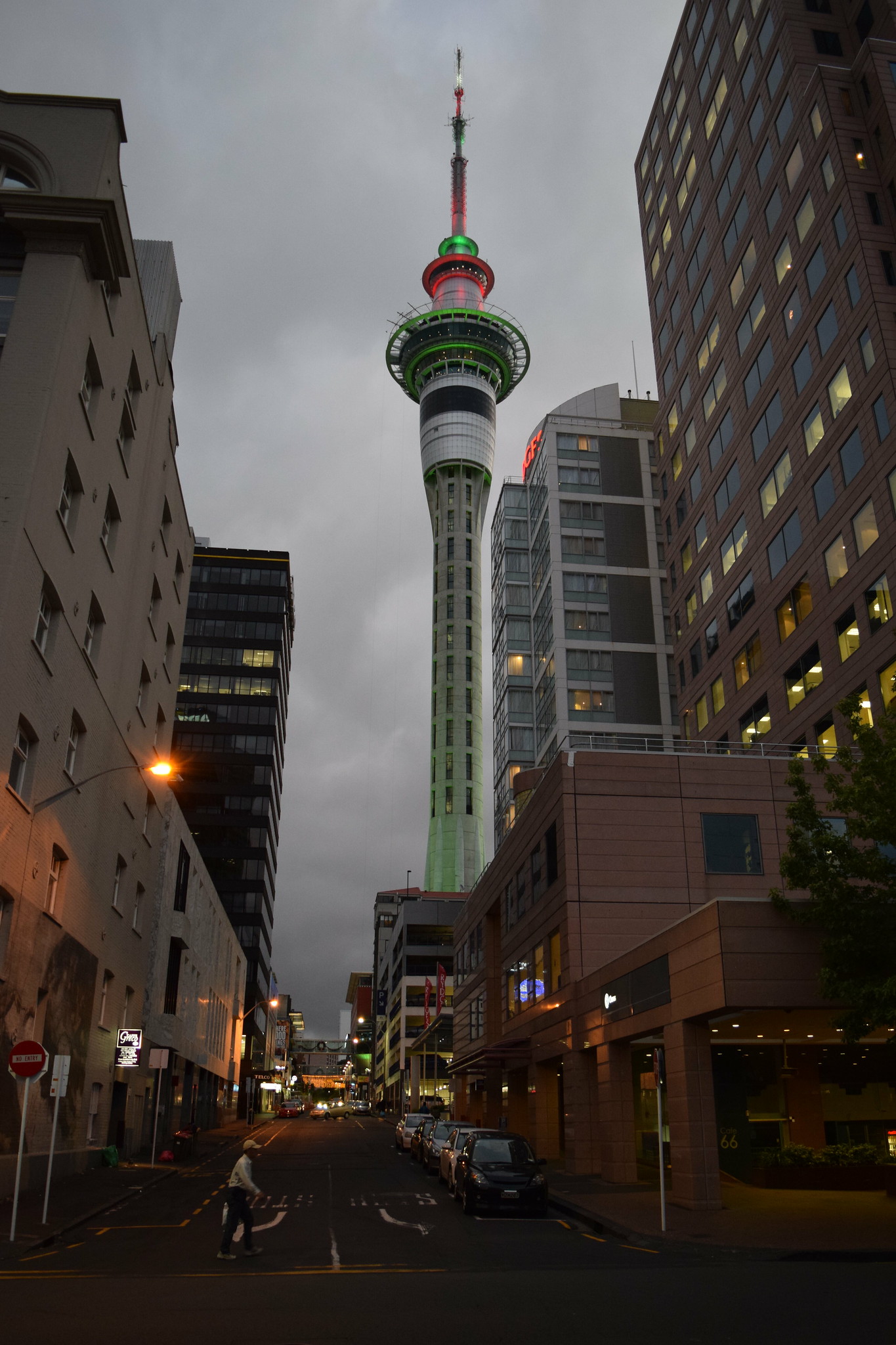 The Sky Tower in Christmas colors. 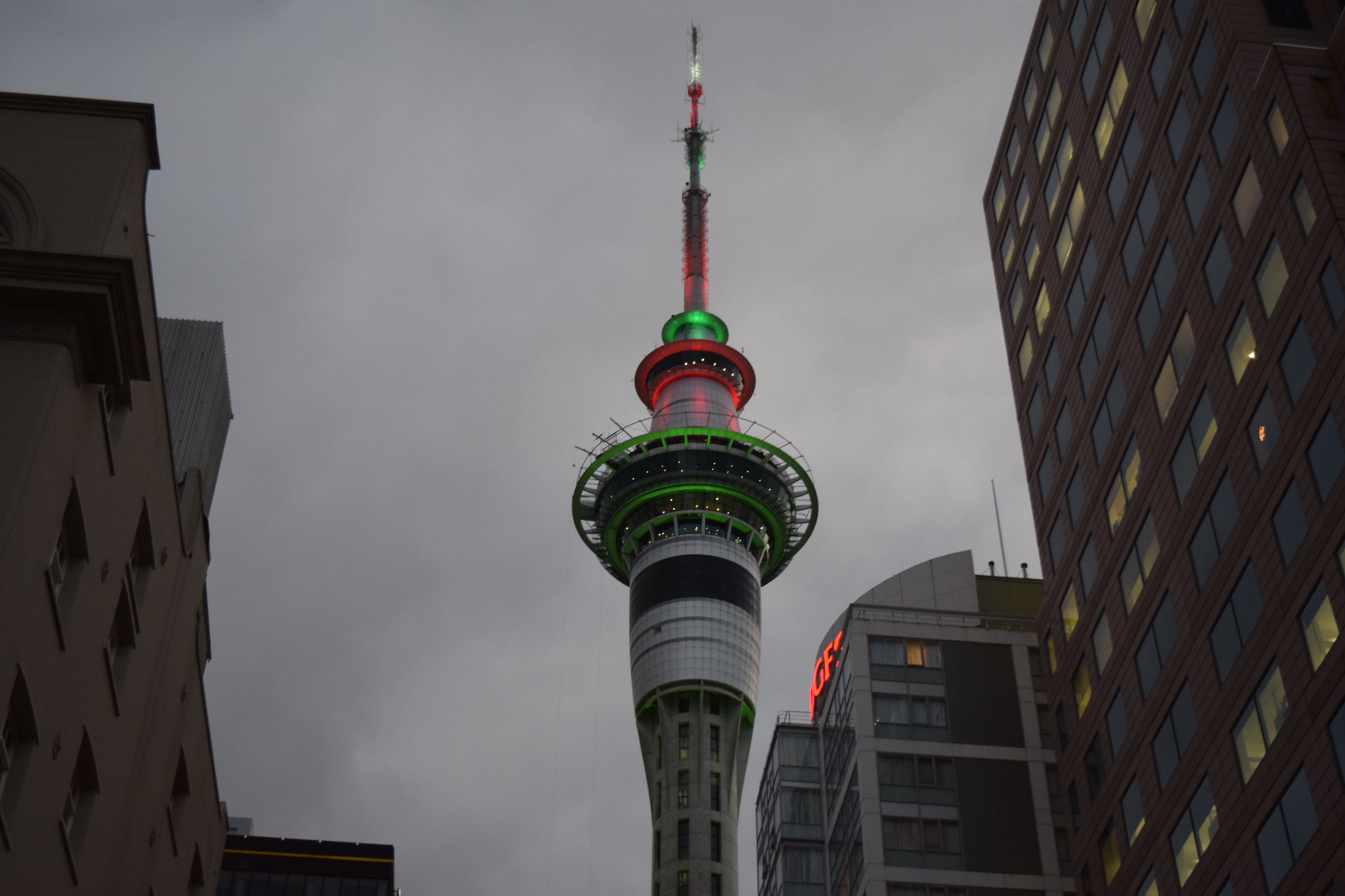 Zoomed in on the top. 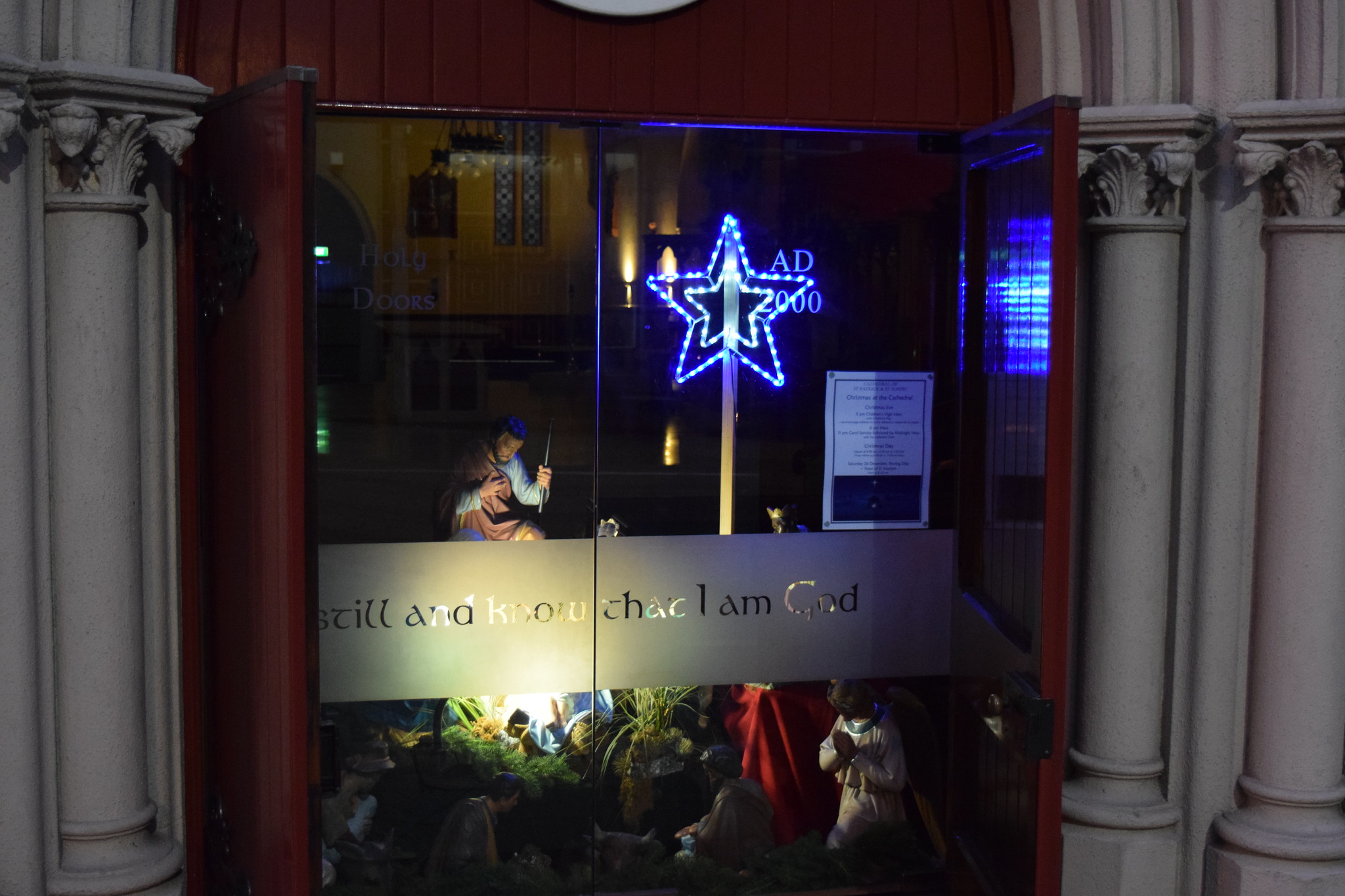 I was standing beside St. Pat’s to take the above photos, so I captured one of the nativity scene while I was at it. 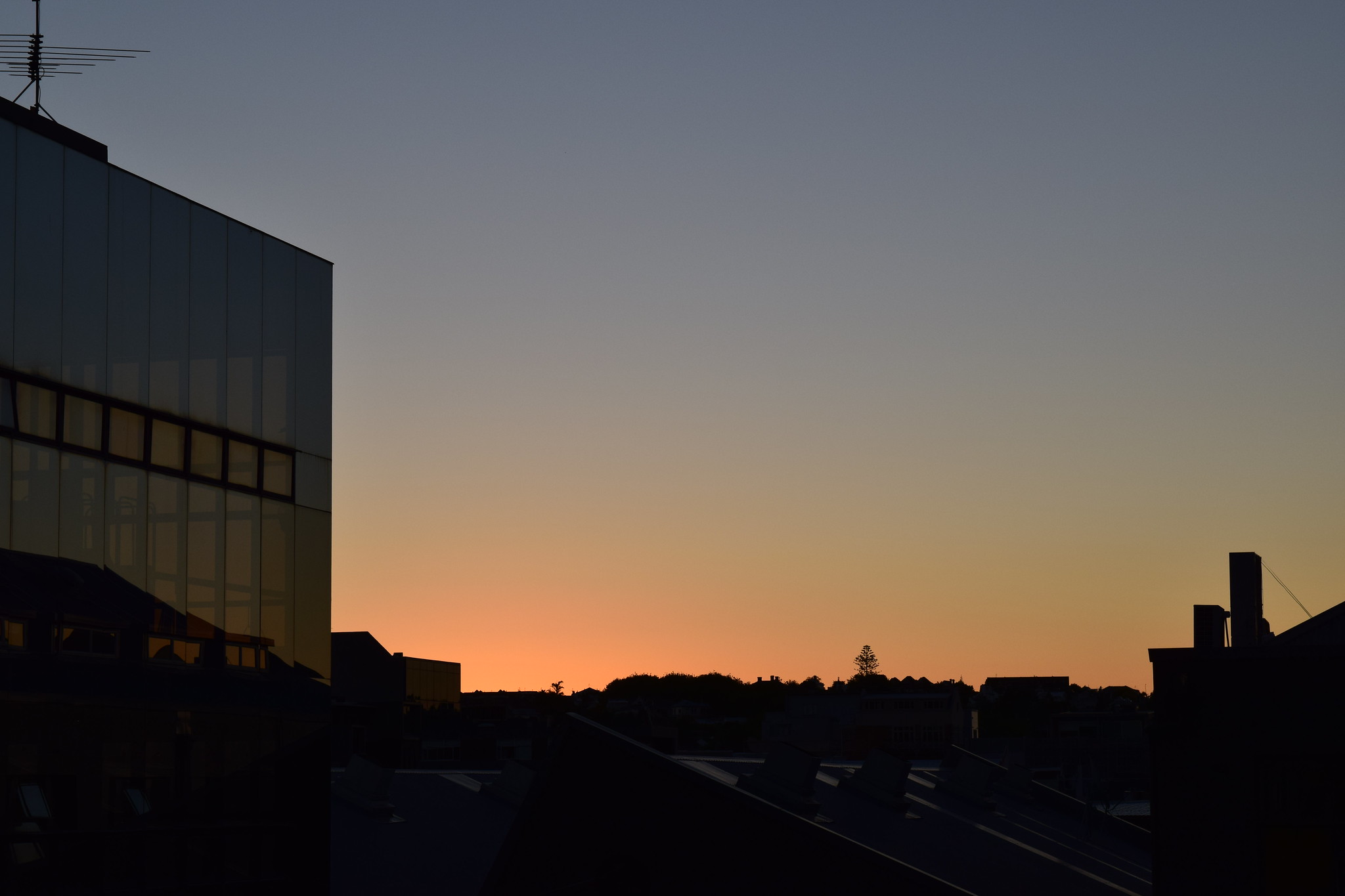 The best bird photo I have ever taken.

So thanks for tolerating this boring camera post. There’s another boring post coming, but if you can sit through that then the next couple of posts will feature some really cool photos that I hope showcase the camera’s ability!