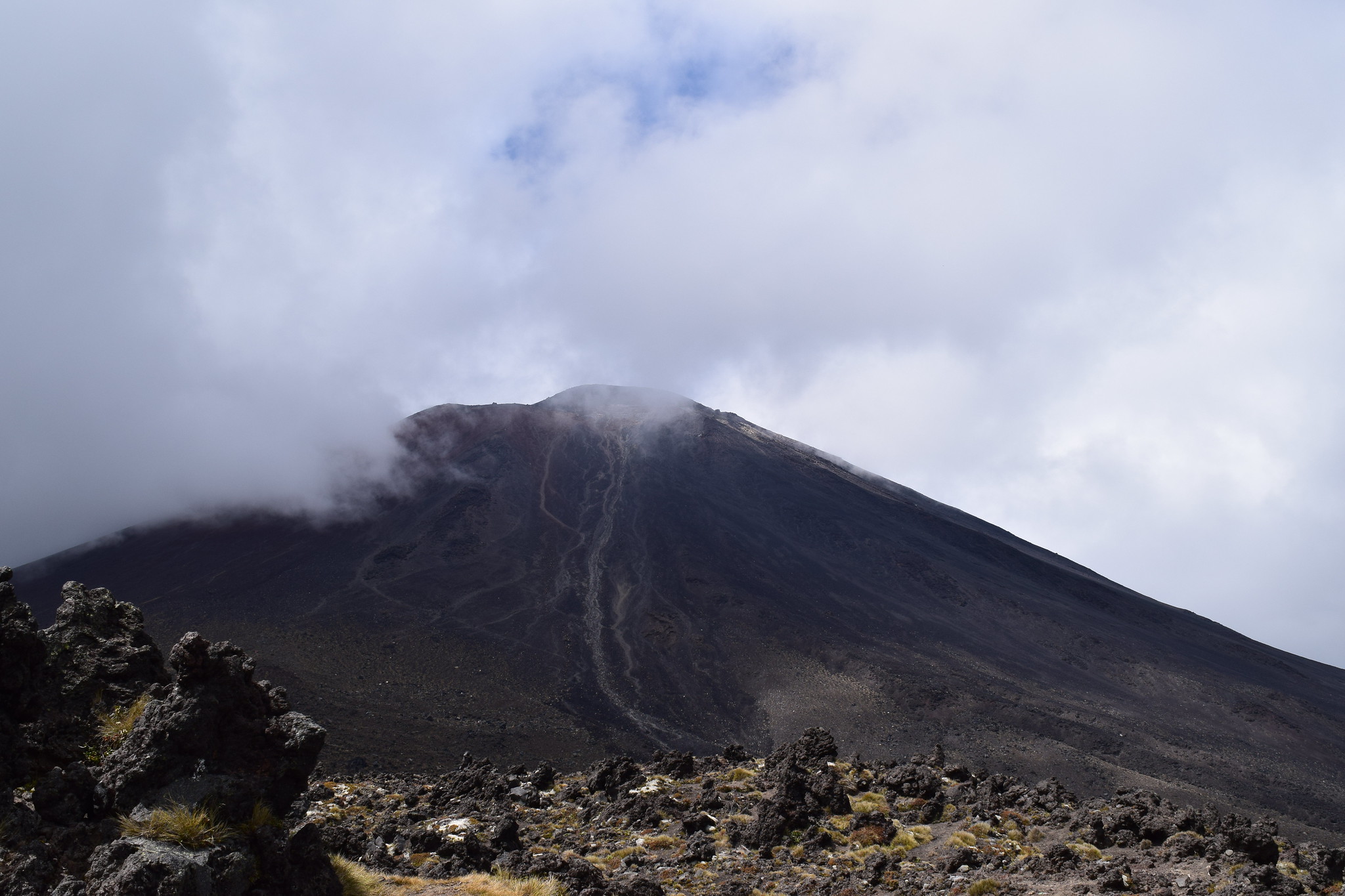 Last time, we left off in the shadow of Mt. Ngauruhoe, Amon Amarth, known to filmgoers and Tolkien fans as Mount Doom. If you want the full story you should check out the previous post first, and if you’re wondering why this post is titled New Year’s Bach, you should head back to part 1 of the series. 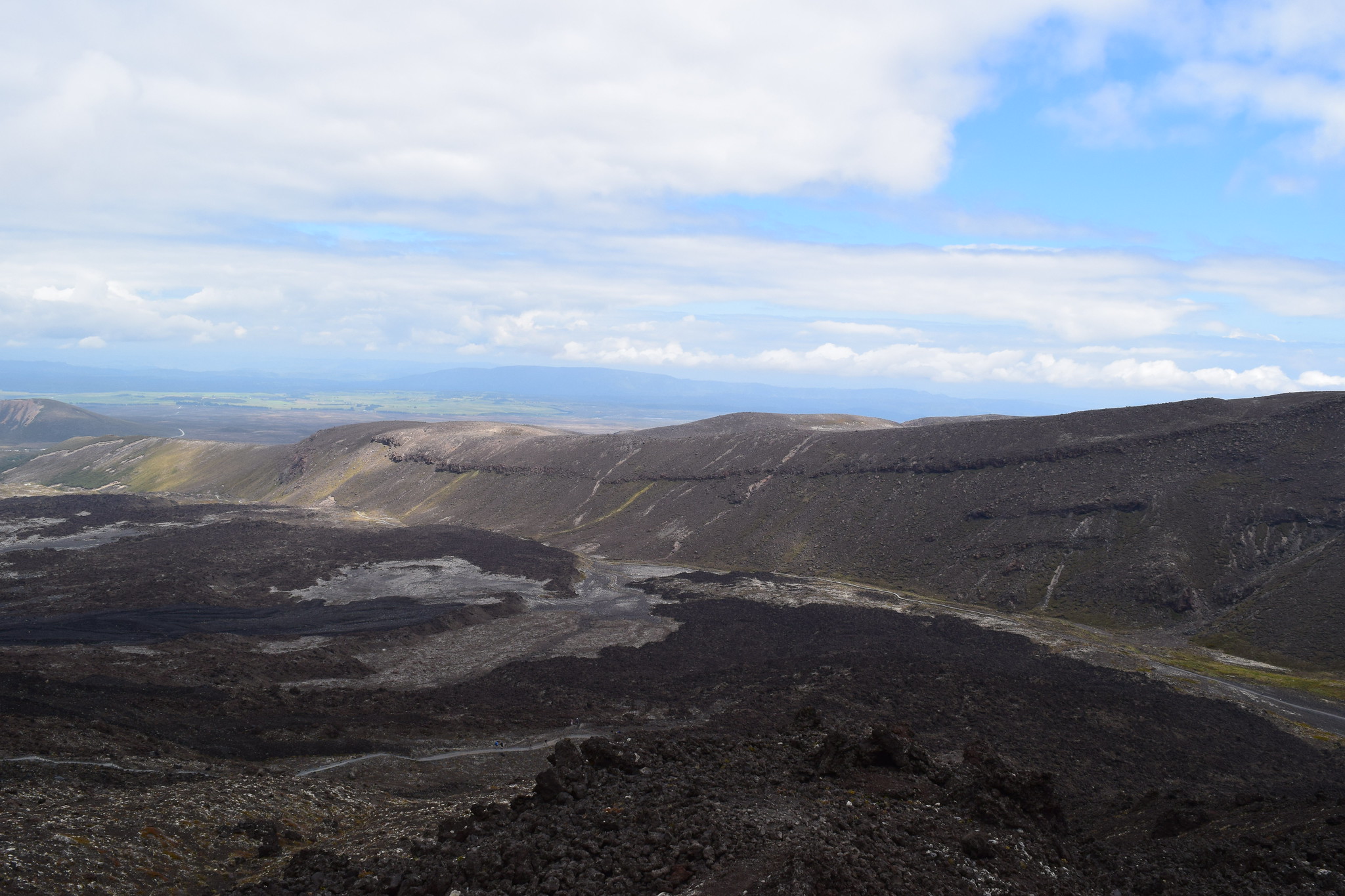 We just finished eating our lunch at the base of the cone where the Tongariro Alpine Crossing branches off. We had climbed the Devil’s Staircase, and were ready to tackle the summit.

You may notice that the ground alternates between almost a fine sand and rough rocks. The cone is entirely covered in a sort of volcanic scree called tephra. The smaller bits of tephra are classified as lapilli, and these little guys are one of the reasons why climbing the mountain is so tough. 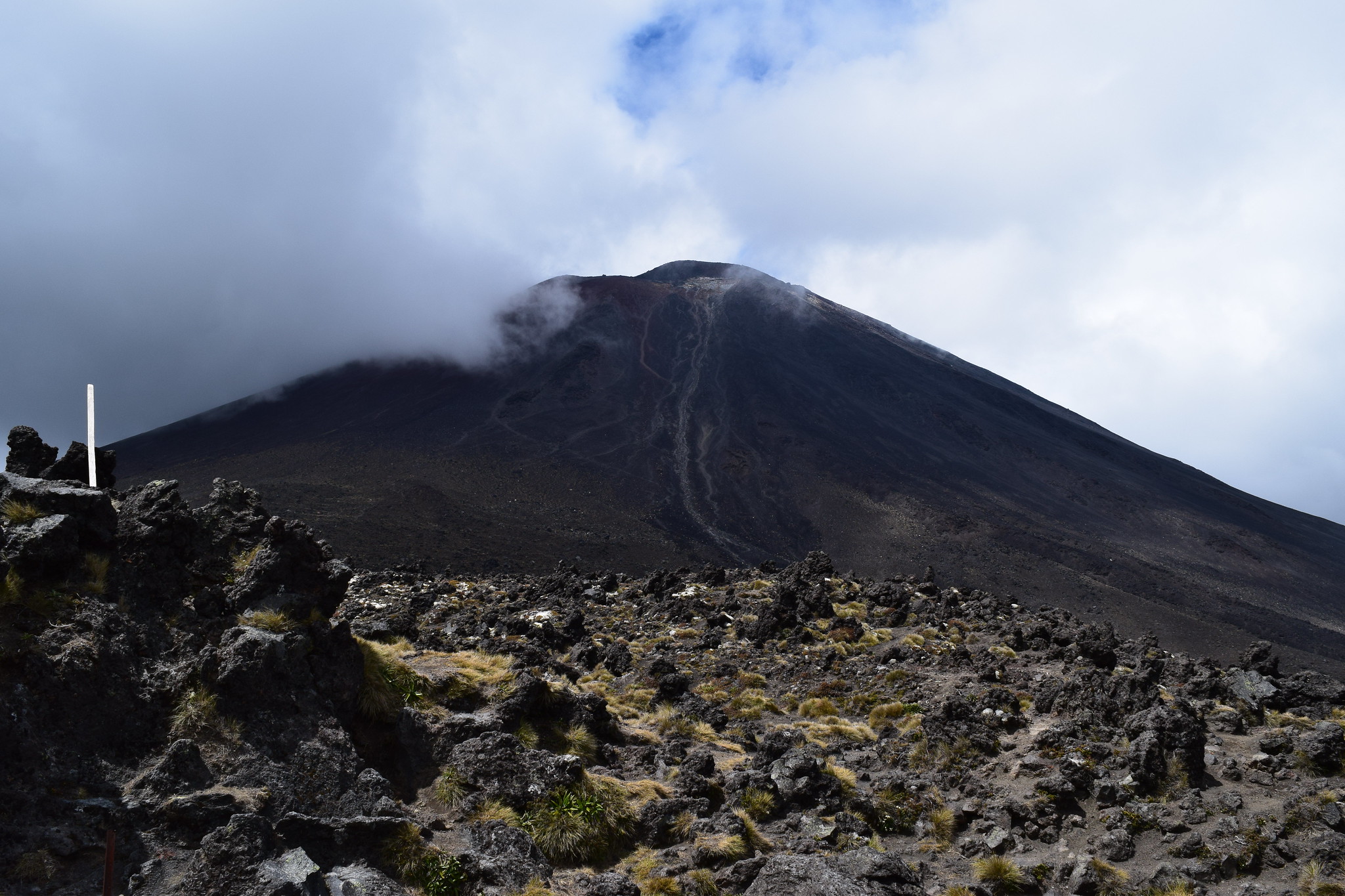 At first glance, it may appear that there’s a trail running up the mountain. This is actually not correct. Climbers must make their way up the side of the cone with care, being aware that ever-changing slope conditions can make a previously viable path nearly impassible. We had heard that just yesterday three hikers had to be helicoptered out because they were hit by falling rocks. This was not especially encouraging news. But we sallied forth!

(The long exposure on this shot makes the white post look almost like a photographic glitch. Those white posts were the only things marking the path to the mountain, until those too finally stopped and climbers are left to their own devices). 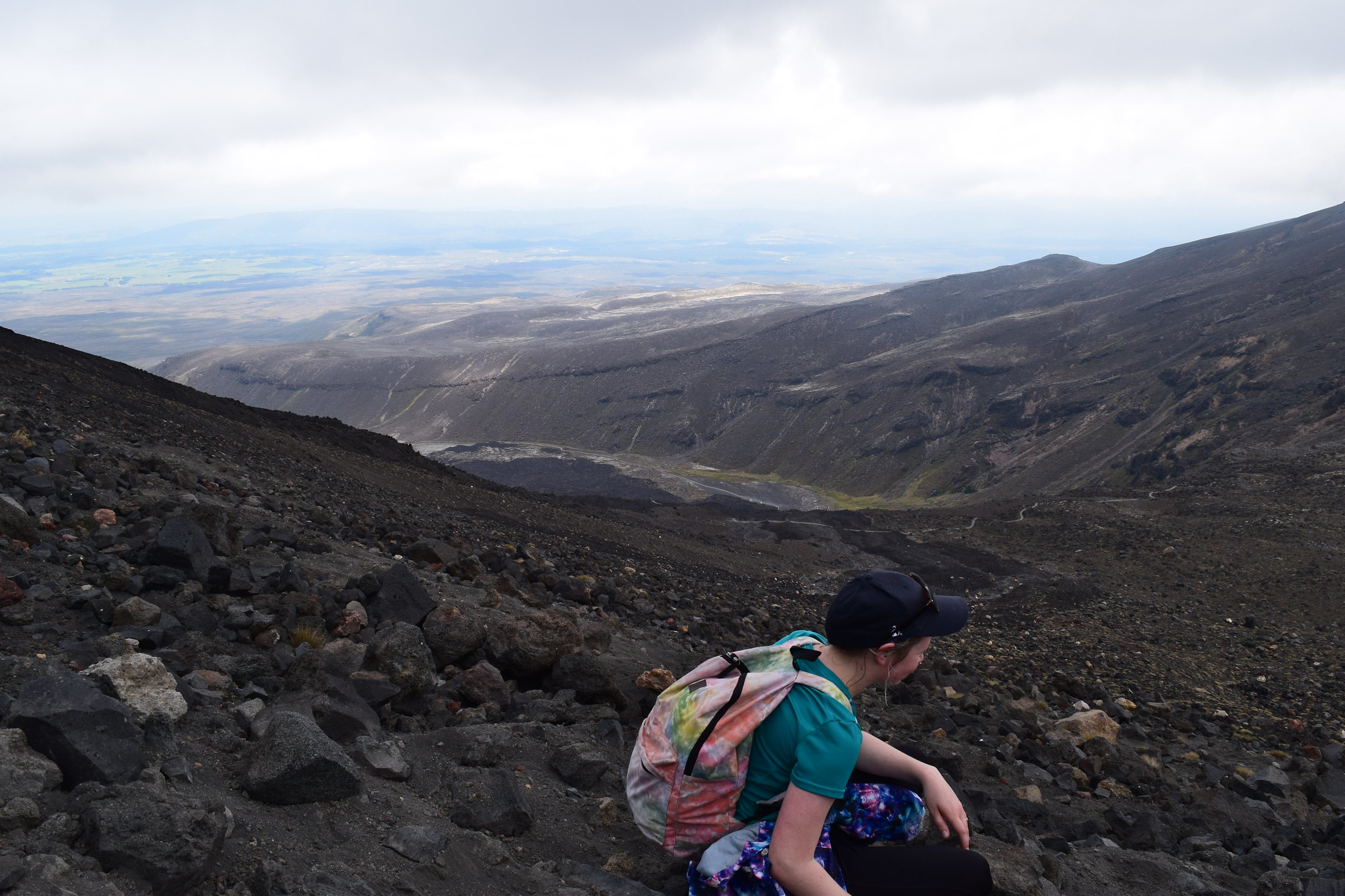 The first bit of the climb was actually quite hard, simply because so much of the tephra has slid down. Every step up involved sliding back about half a step. It was easy to fall down, bruising hands and knees and sliding back a meter or more. 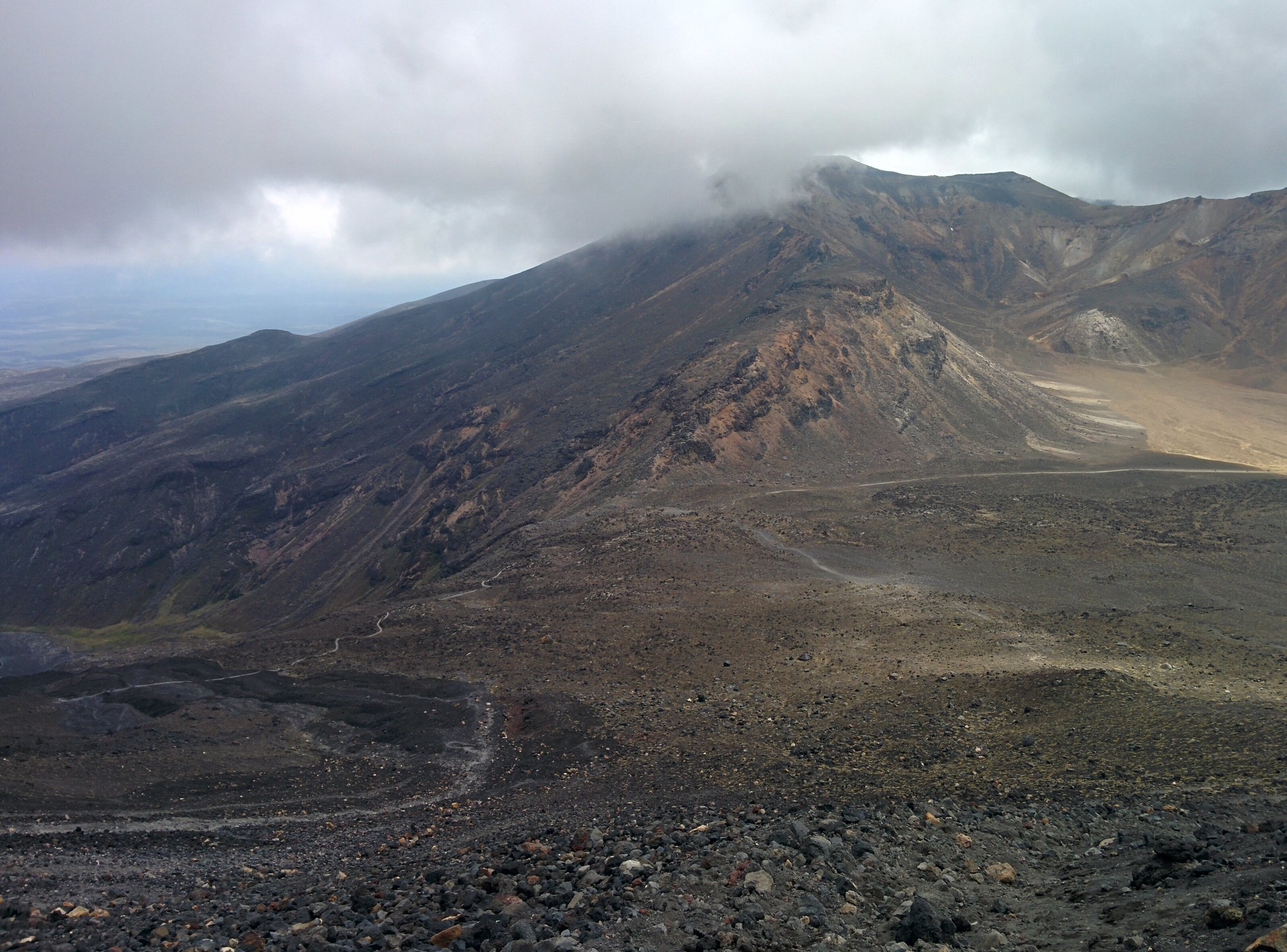 From here, we could see the crossroads. This is a phone photo; I had put the Nikon in my pack by this point, as I didn’t want it knocking about while climbing. Taylor took a photo using his big lens at full zoom and said that he could see our friend Kali down at the base, where she had elected to hang out. 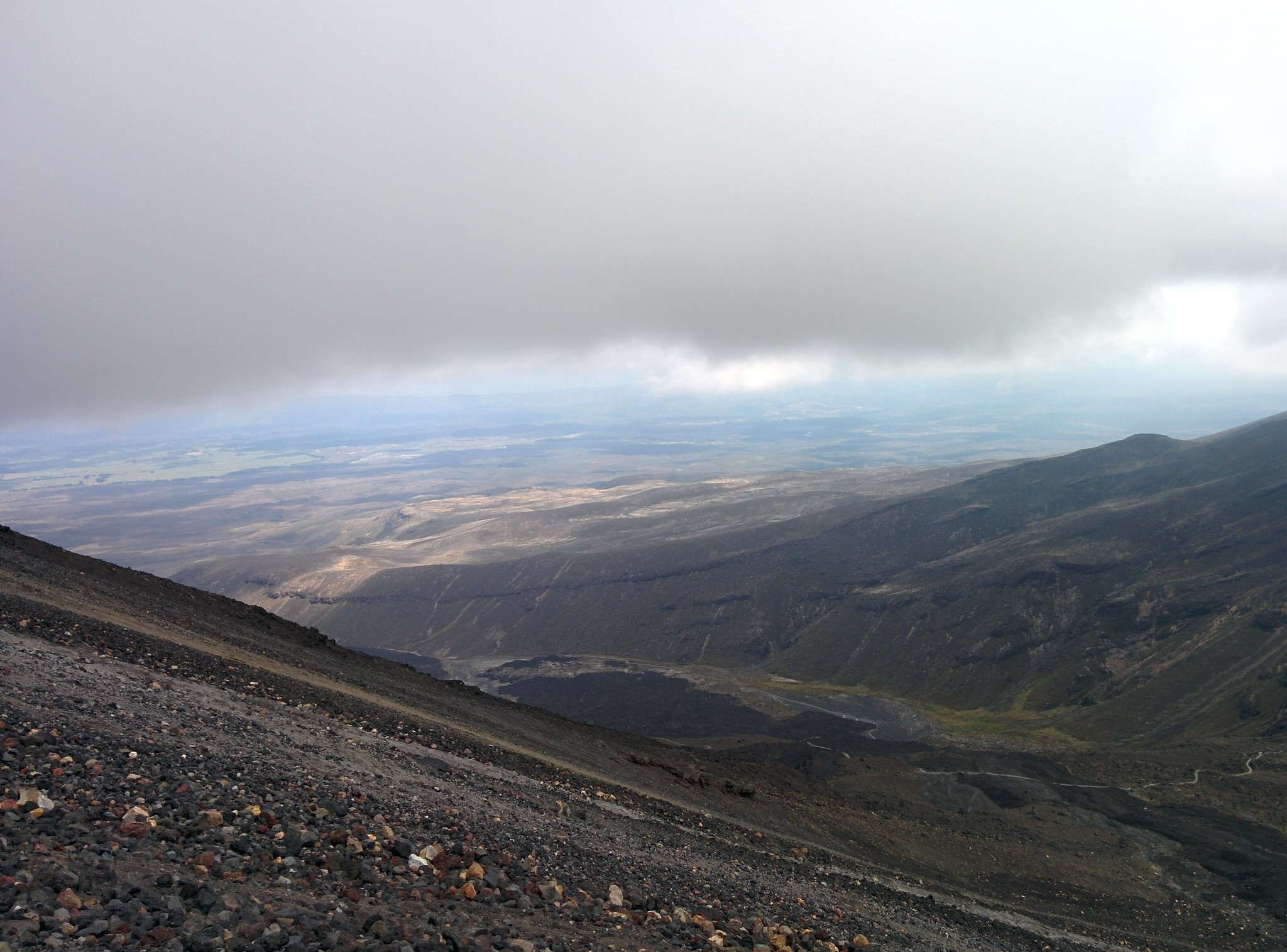 It’s difficult to convey with photos just how utterly steep the side of the mountain is. My brain finds it difficult to process views like this when the ground is at such an angle; not only was I battling muscle fatigue, I was also fighting vertigo!

As you can see, we were climbing into a pretty thick cloundbank. My fellow adventurers were sad that they wouldn’t be able to get epic photos from further up the mountain, but I was glad in that the cloud cover obscured the view and made the climb less chest-tighteningly terrifying! 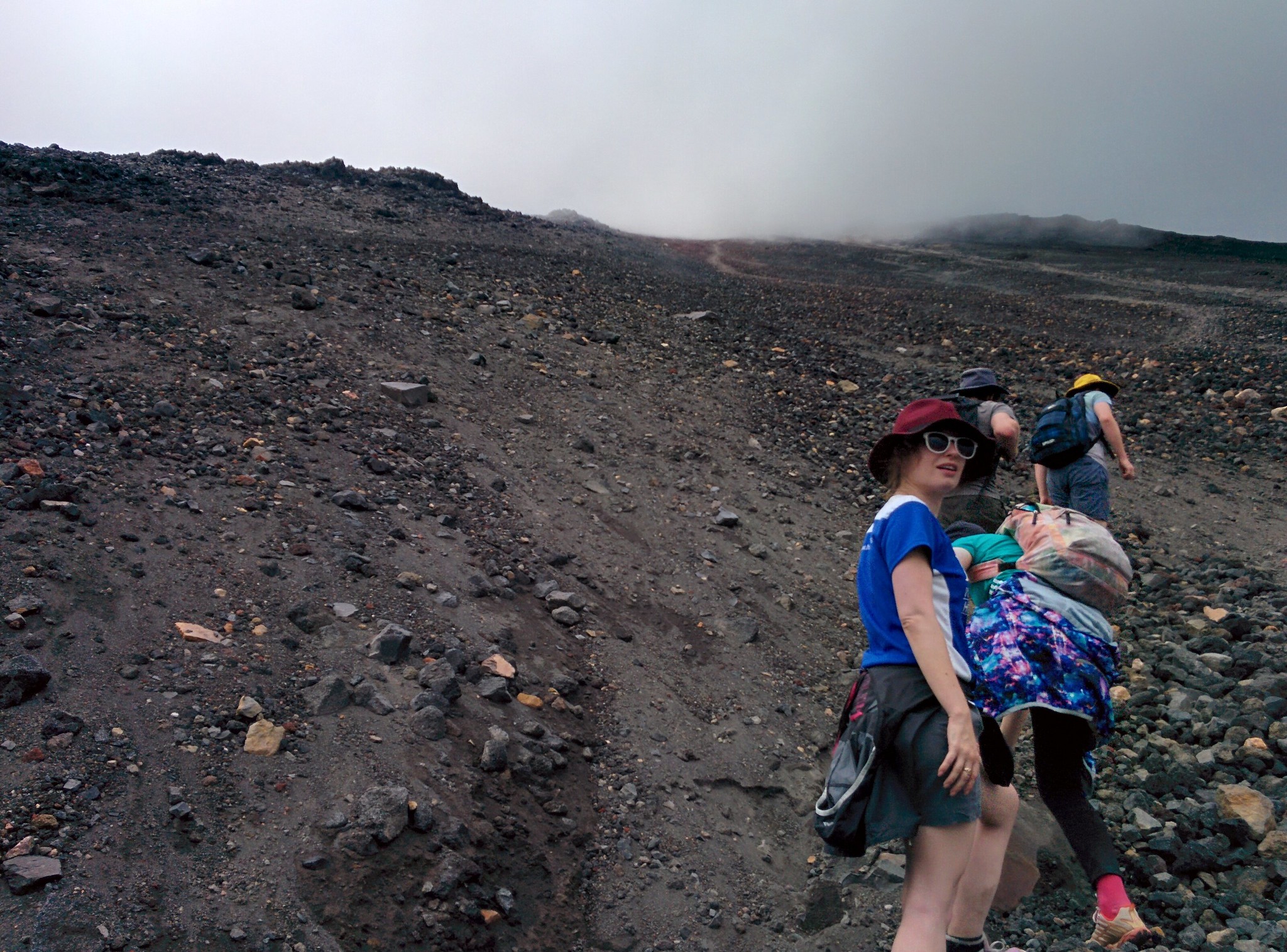 This picture, I think, illustrates pretty well what I’m talking about. This may also be the closest I was to the rest of the group on the entire climb! 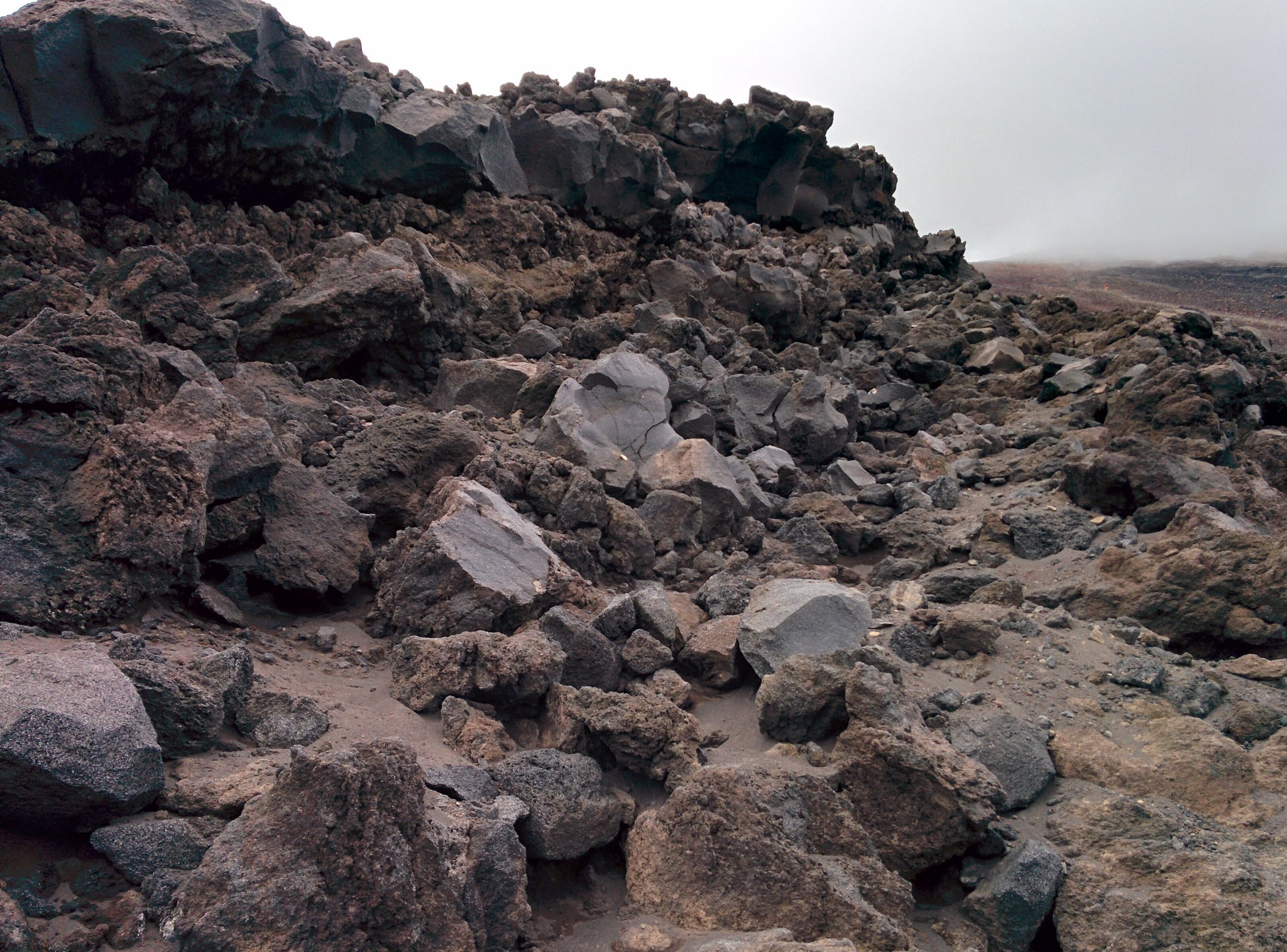 Once we got up the first 1/3rd or so of the climb, the terrain became much more rocky. This was easier going because we weren’t sliding around all the time, but it was still quite treacherous because even a rock that seemed firmly secured could pull loose and fall when climbing. It’s not uncommon to hear a yell of “rock!” from above and have to stop the climb to make sure you don’t get hit. We tried to spread out laterally rather than climbing in a straight line to avoid konking each other with falling projectiles! 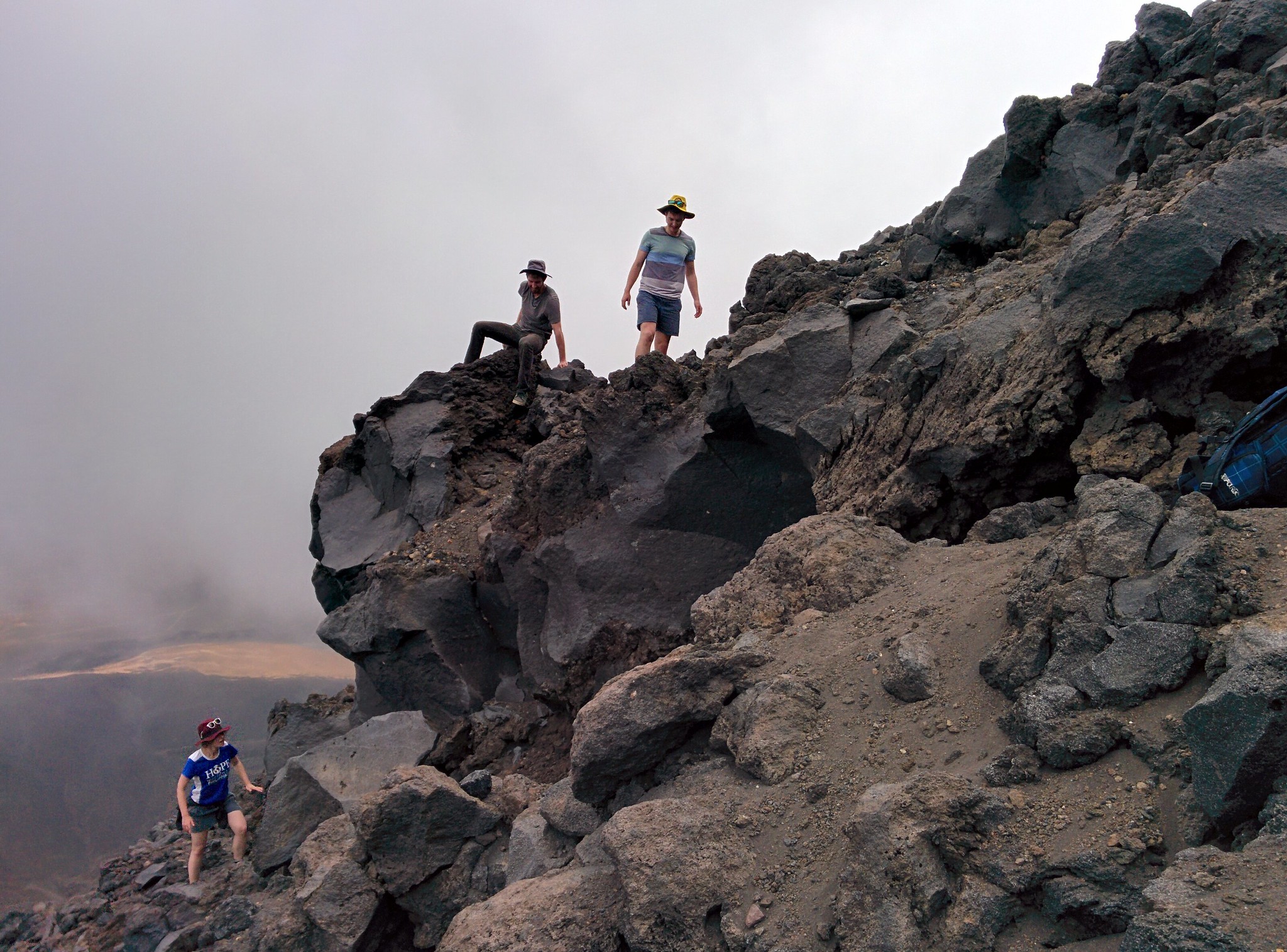 We took occasional breaks to catch our breath and try to enjoy what bits of the view we could see. I have to admit that it was very difficult for me to enjoy the view, as all I could think about was how terrifying it would be to climb back down! 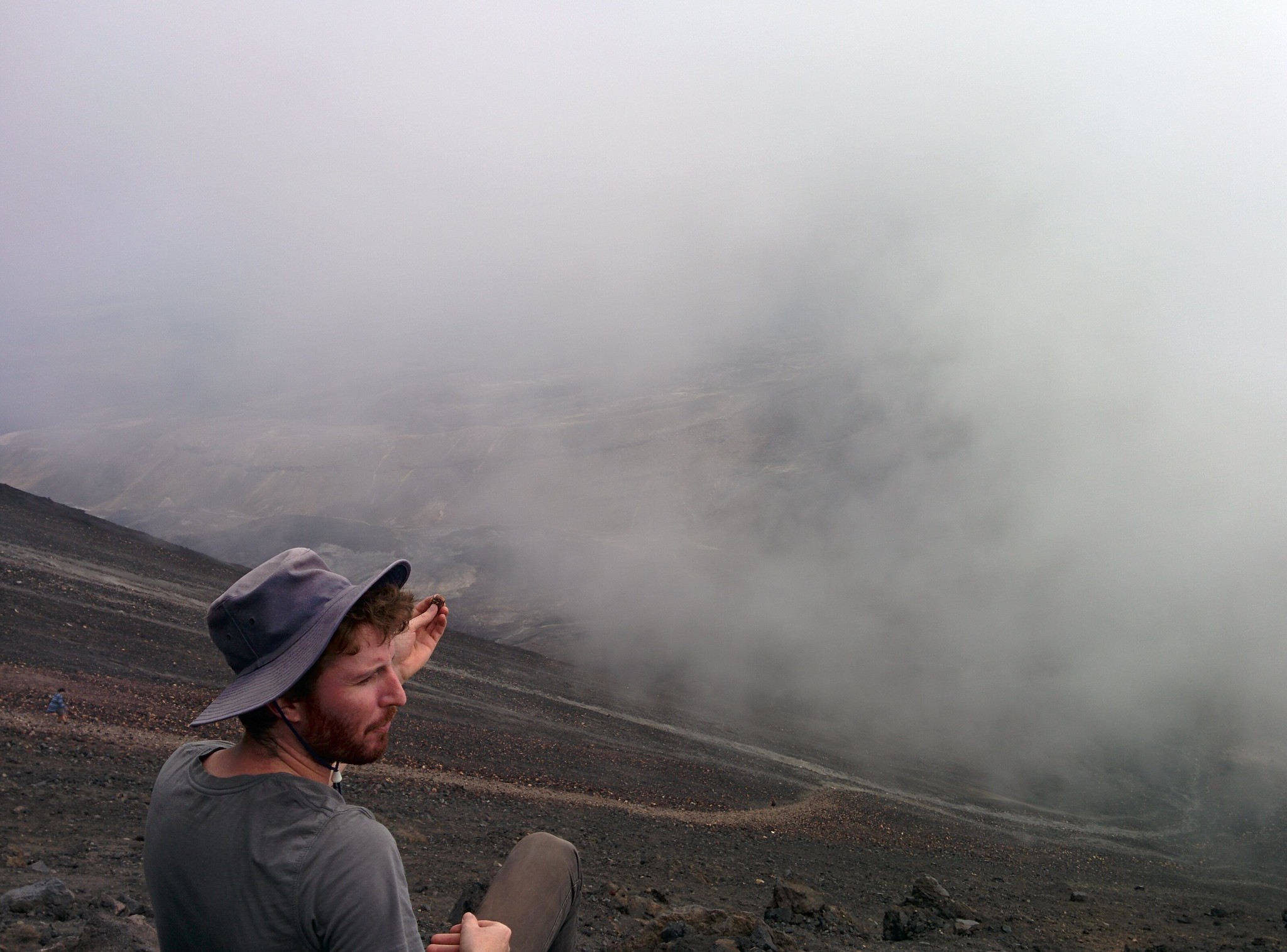 If you zoom in over Taylor’s left shoulder you’ll see a climber on the descent. Going down involves a technique we dubbed scree-walking where you sort of surf the gravel down. I saw some people almost leaping down, making amazing time. I cautiously picked my way down, falling a lot and looking much less graceful. But we’ll get to that later! 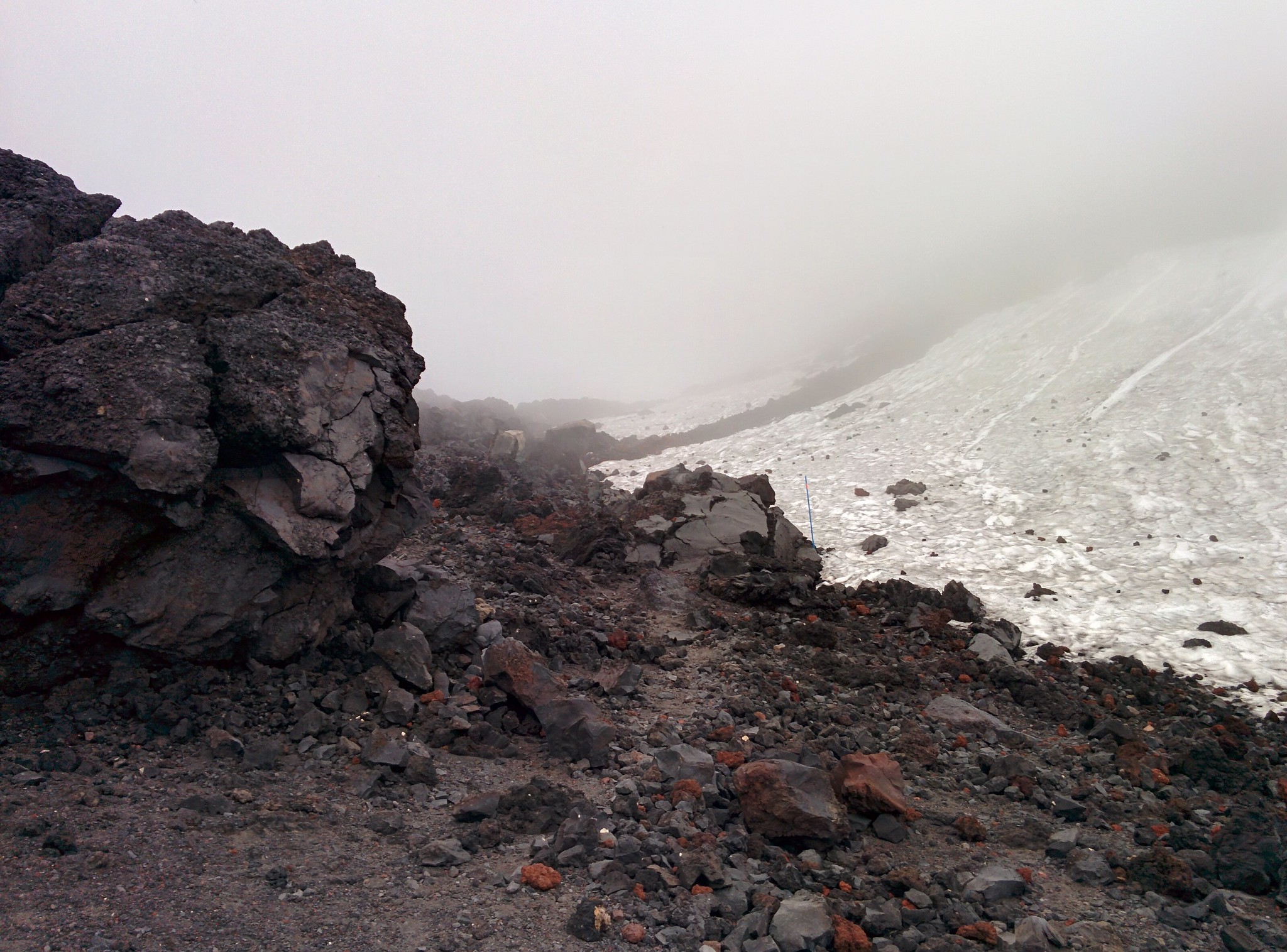 Even though it’s a hot summer, there’s still snow at the top! Fortunately there’s a narrow path through the snow, as trying to climb on it would probably be even worse than the scree. 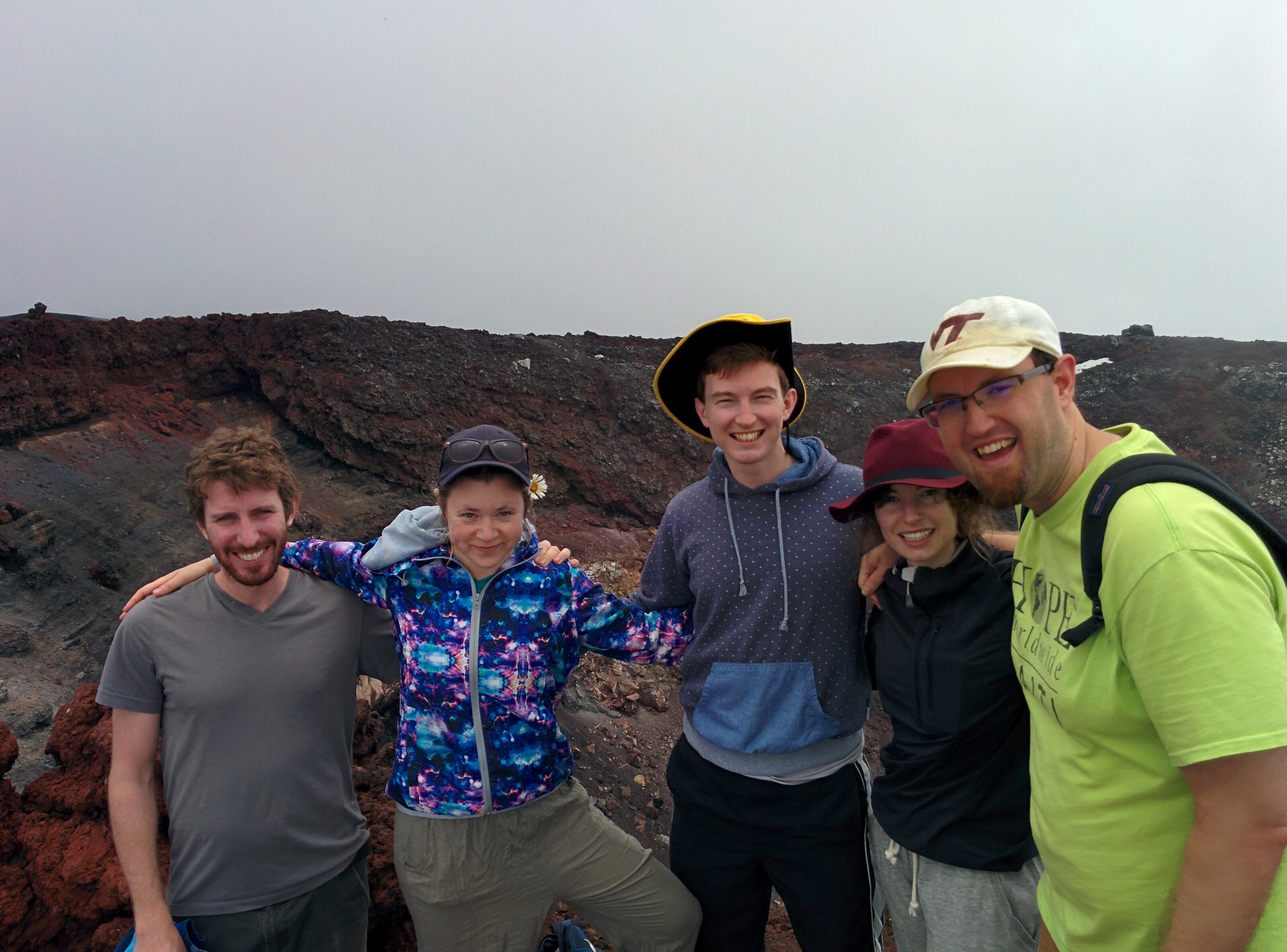 And huzzah! We reached the summit! There was a German hiker who made it up about the same time we did and kindly took a group photo of us using my phone. 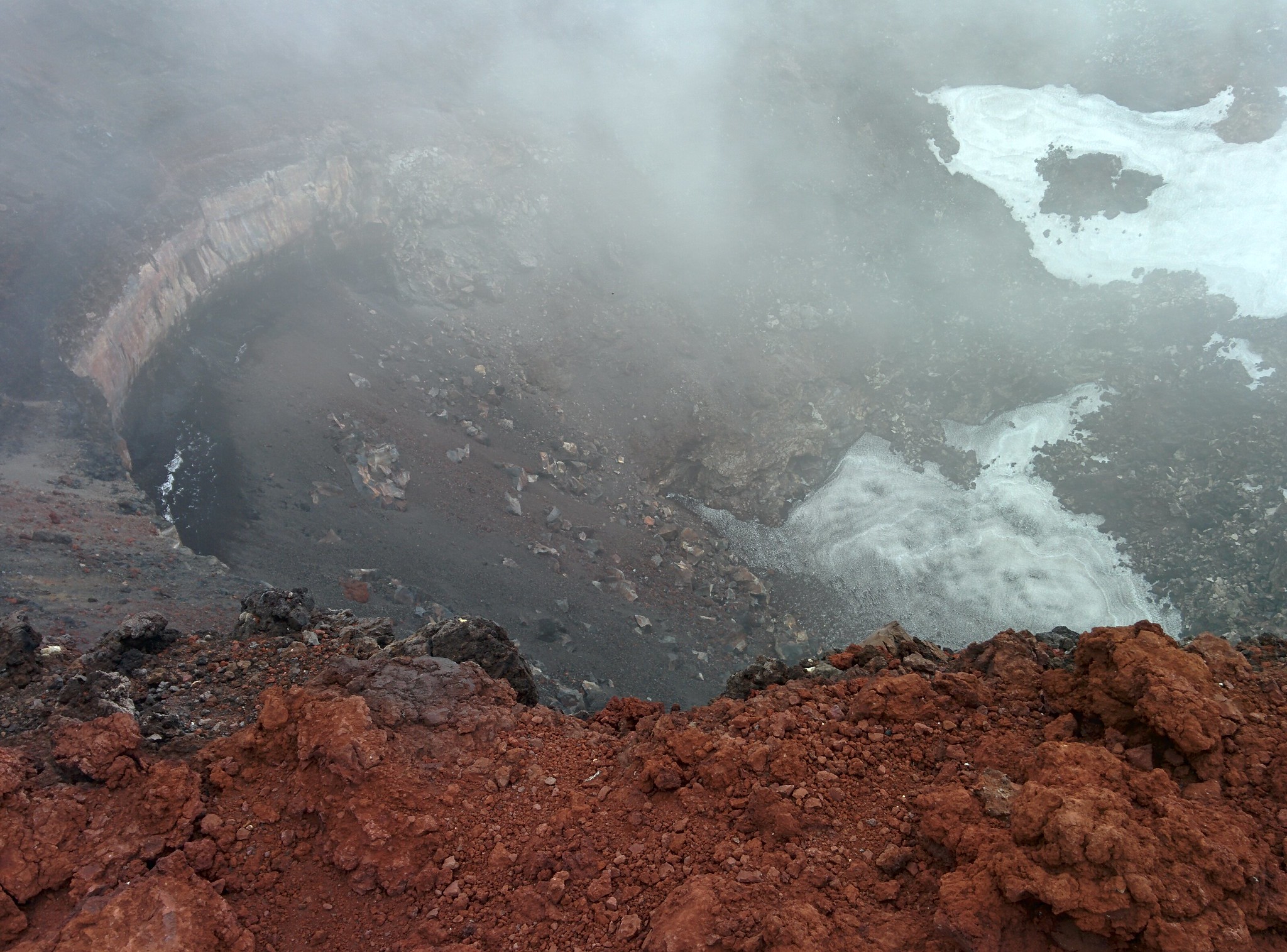 The volcanic crater is quite steep, and it’s full of noxious gasses. They say if you climb down there you might suffocate before you can climb back out! We didn’t do that. 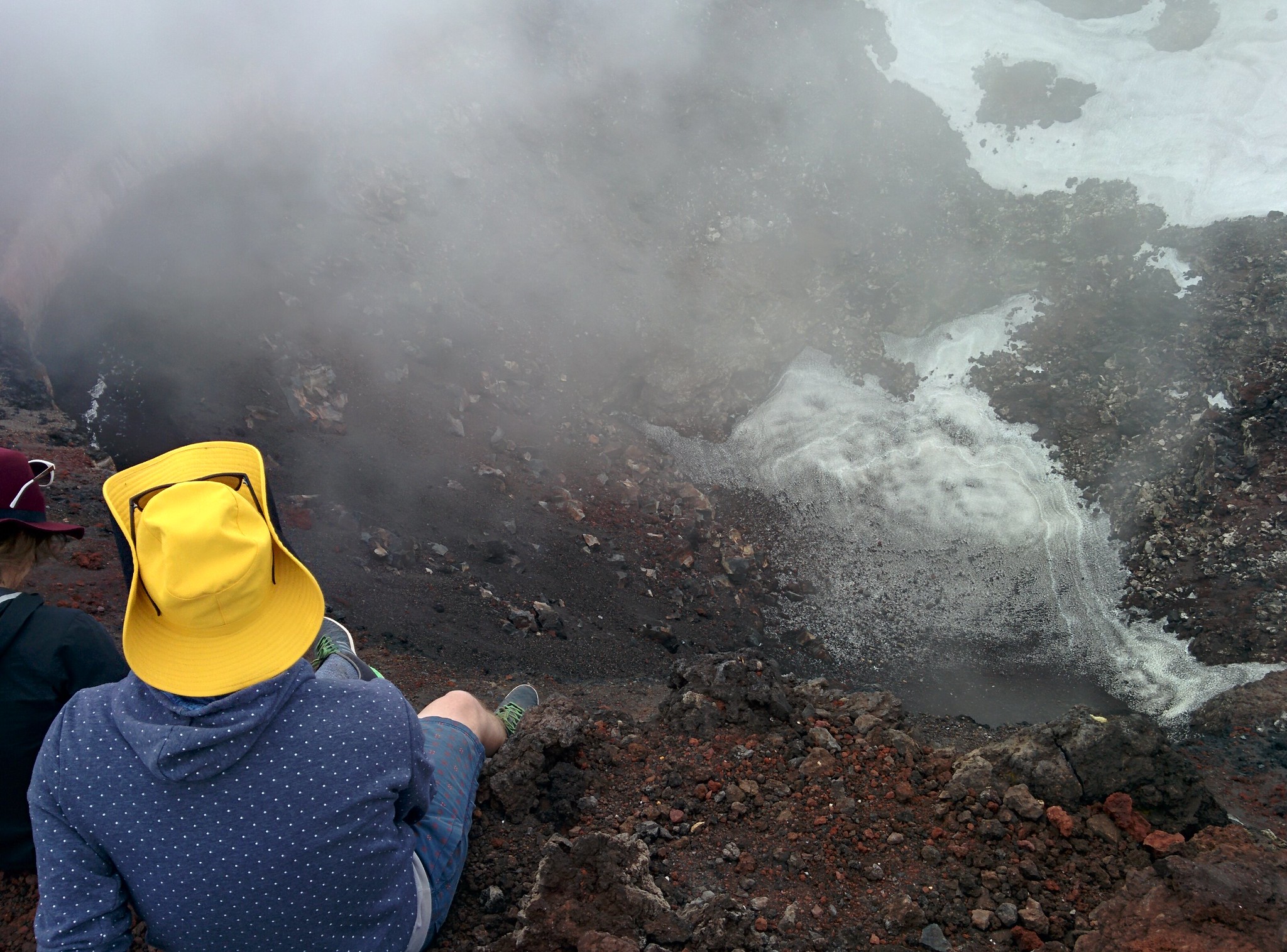 Rob, however, decided to demonstrate his fearlessness by sitting on the rim and dangling his feet in. I felt brave enough just taking this photo! 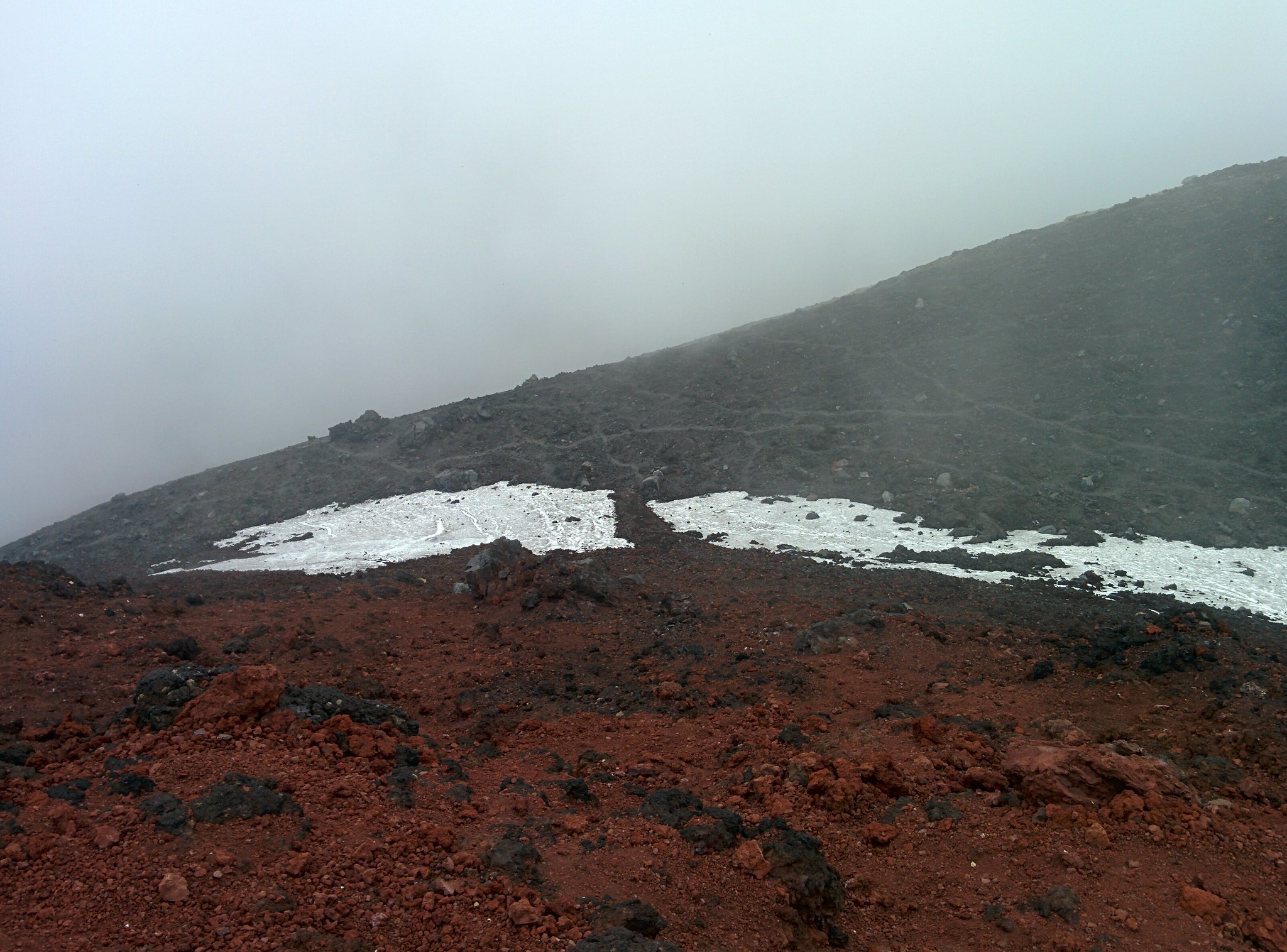 Here’s a view back down the last bit of slope. As a hint of how steep this is, that wide patch of ice and snow looks like a narrow strip! 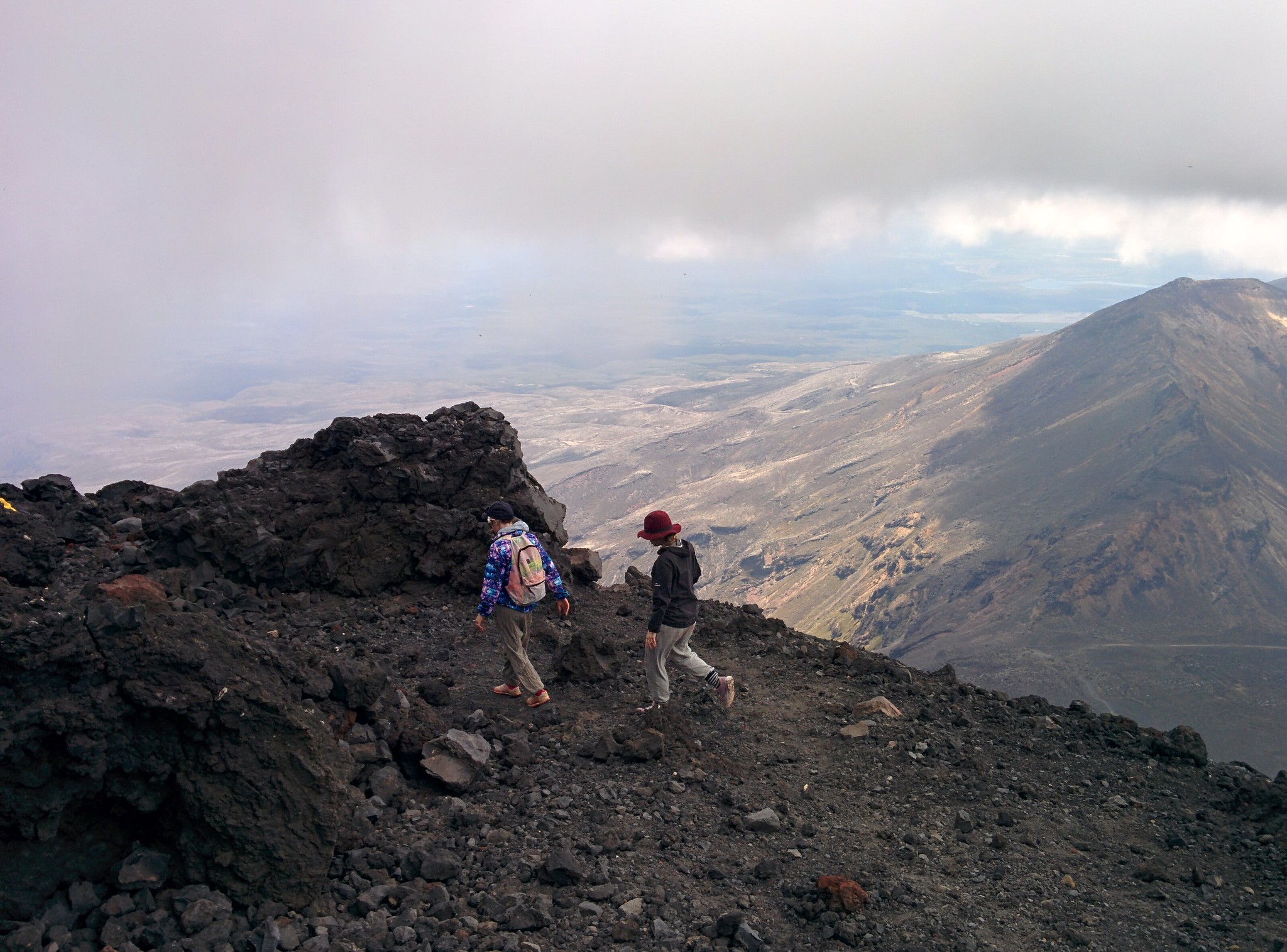 As we prepared to hike back down, the clouds lifted a bit…enough to give a glimpse out. It’s hard to believe that just a couple of hours could bring us this high up over the landscape. Just another testament to how steep the slope really is. 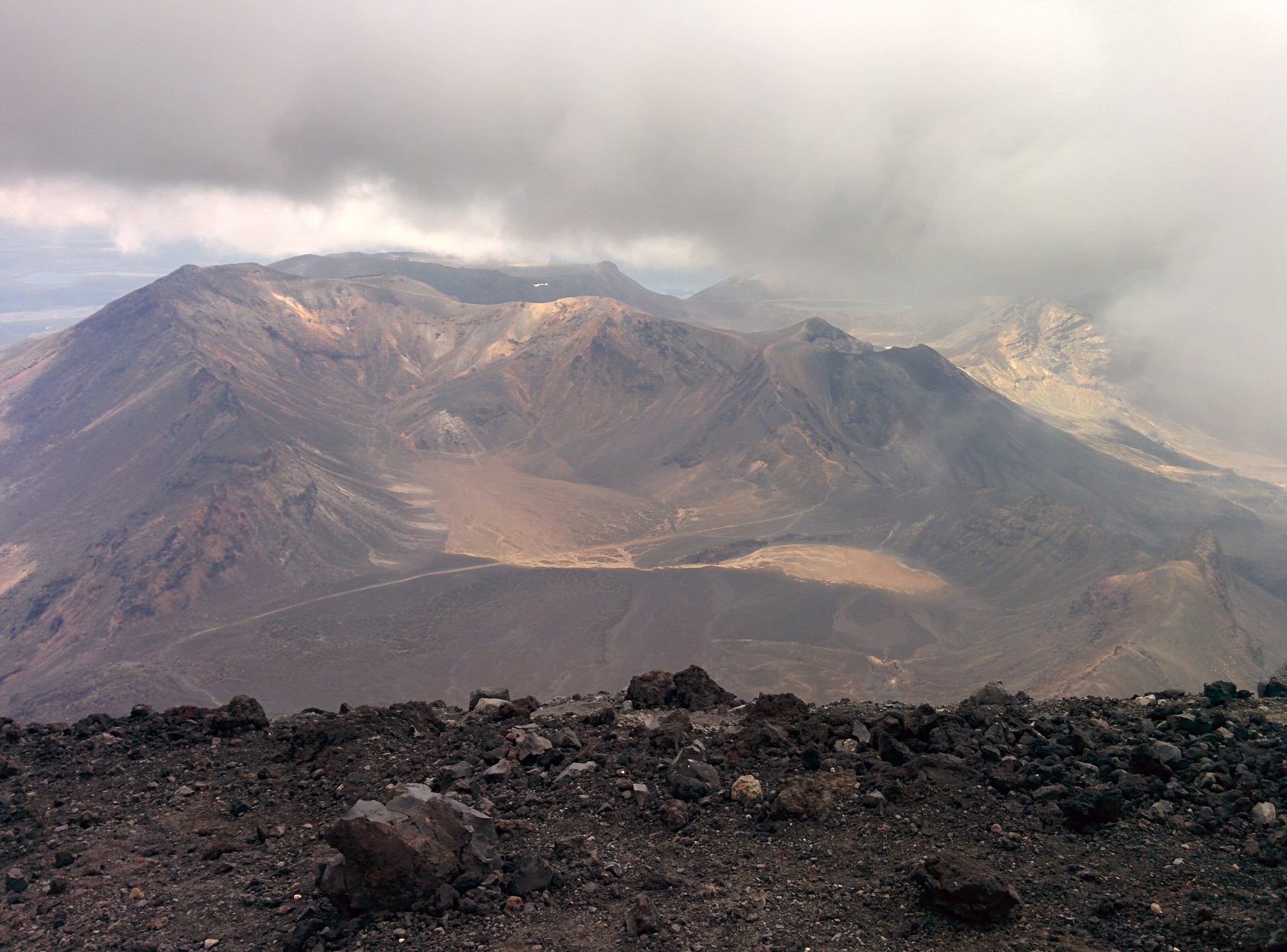 Looking out toward Tongariro. 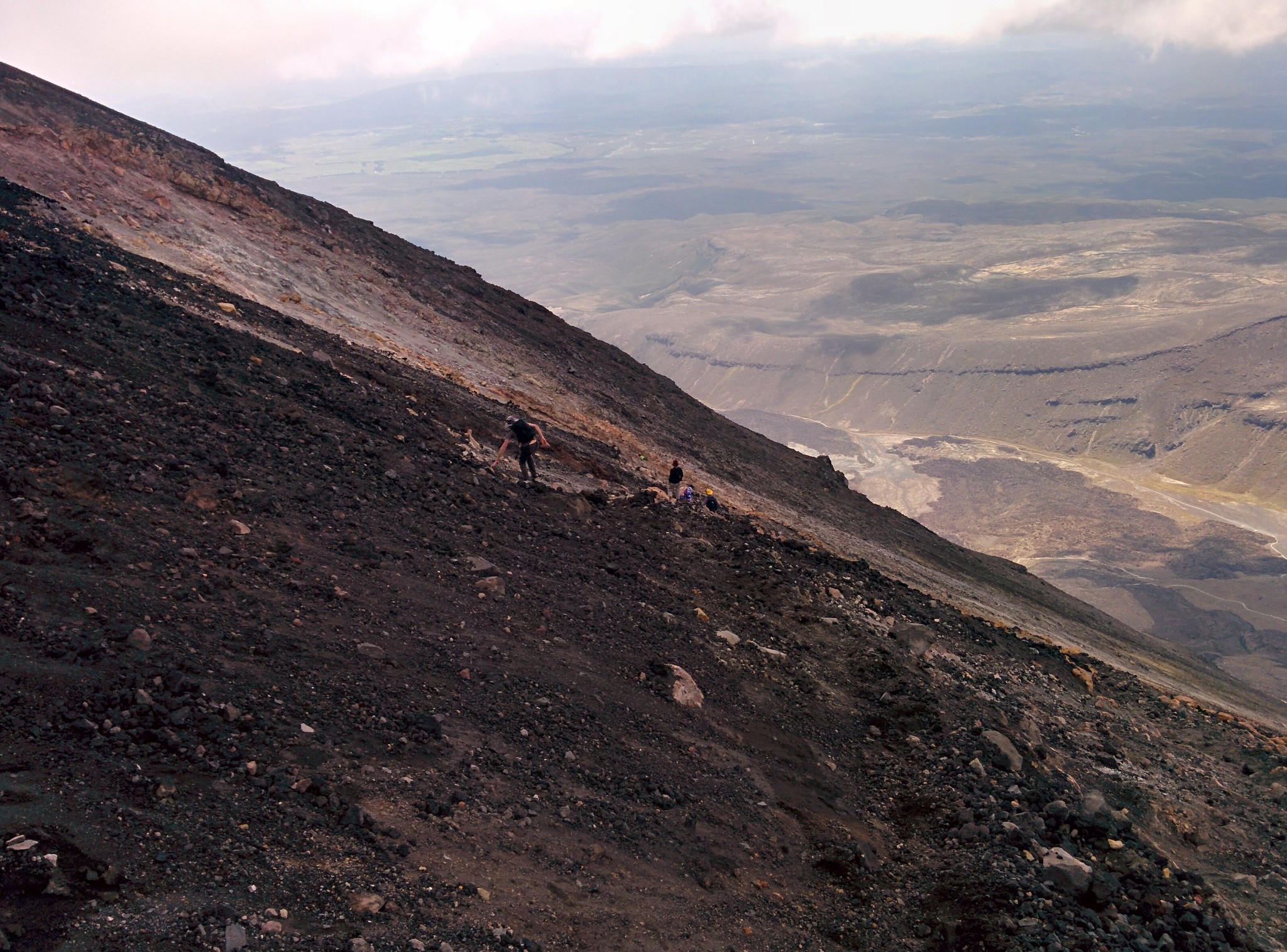 And here’s what we had to climb down! If you’re doing this, I recommend gloves. I fell backward and caught myself with my hands so many times that my palms and wrists were scraped and bloody by the time I got to the bottom.

We did all make it back down to the bottom though, where we reunited with Kali and then all shared some Lembas bread (really shortbread made by Rob and Kate’s aunt) before making the 6km hike back down the staircase and to the carpark. 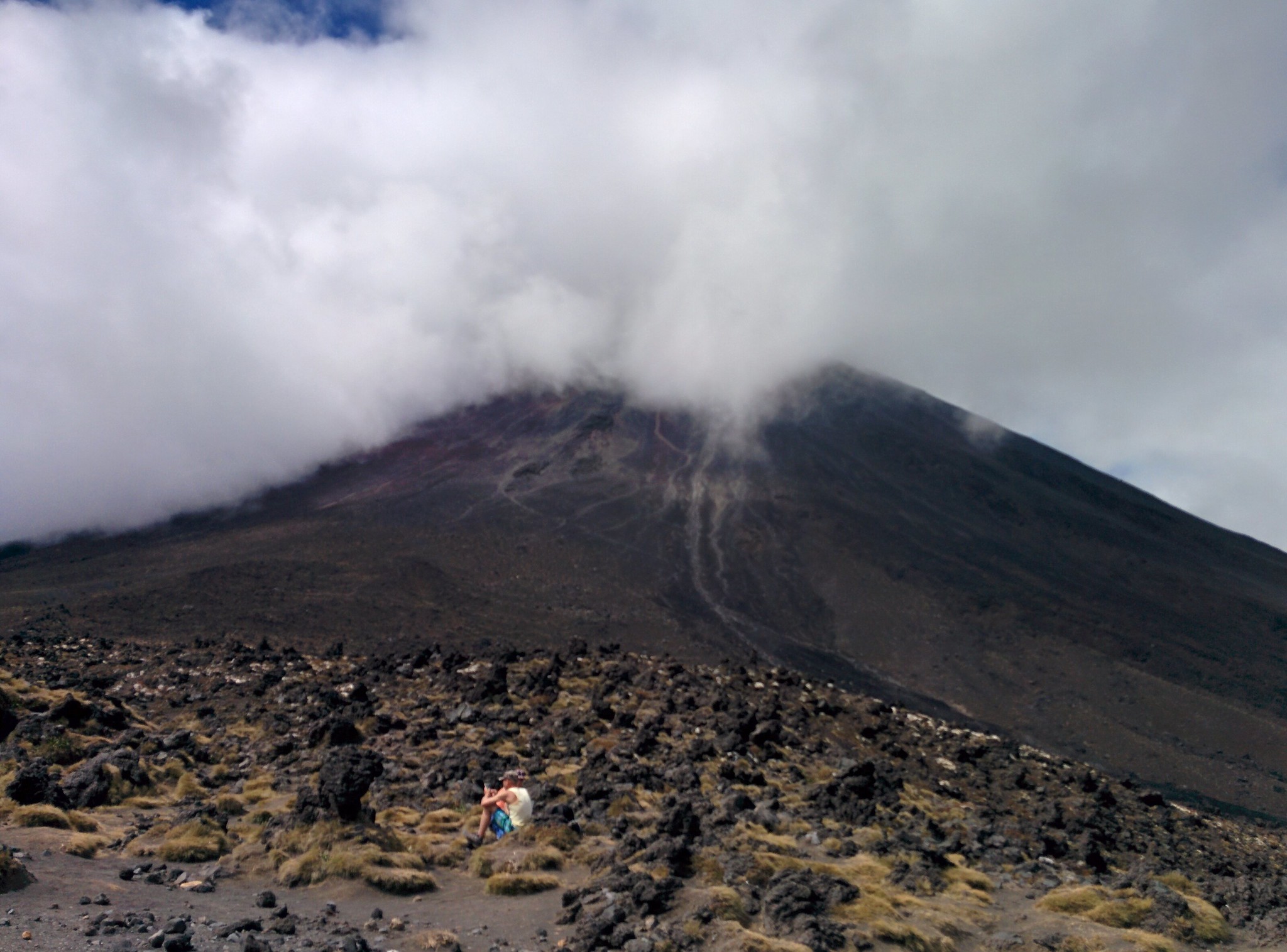 So that’s how we spent New Year’s Eve! After getting back to the bach, we took turns showering and spent the rest of the day re-watching The Return of the King. Whenever Mt. Doom was onscreen we pointed and said “we did that!”

I realize it’s well into 2016 by this point, but that’s the end of 2015. Thanks for following along with my adventures, and here’s to an eventful and adventure-full 2016! I don’t know if I’ll be able to top this, but 2016 will cover falling down a cliff, swinging on a vine like Tarzan, not doing a cliff jump (but photographing other people doing it), and going to the South Island! And that’s just the first two months. I have even more crazy stuff planned for the rest of my time here, so stick around :)