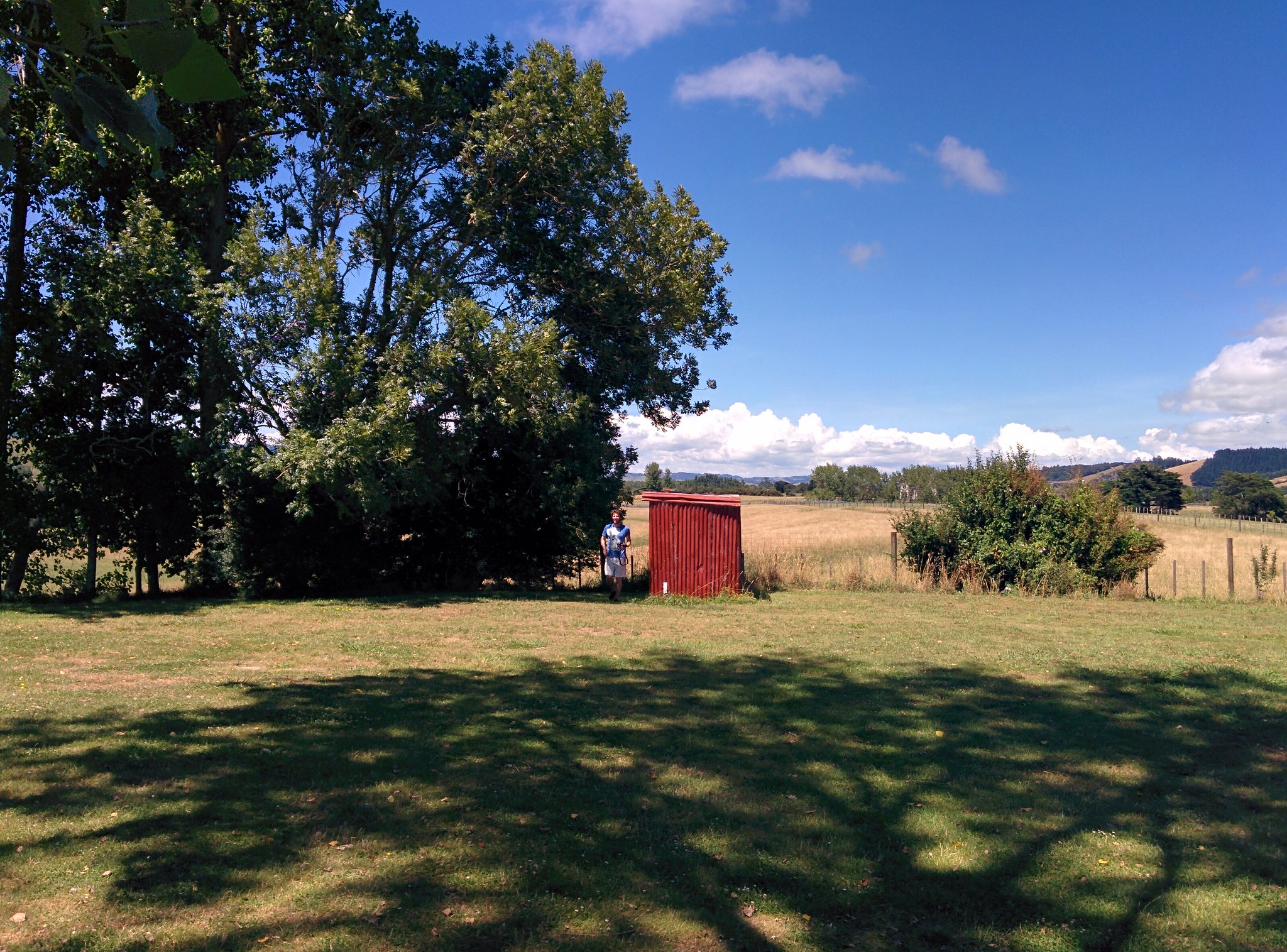 Duder Regional Park is one of those places I found just by scrolling around on a map. It’s on the Eastern coast of the Whakakaiwhara Peninsula and has great views of the Tamaki Strait and the Hunua Ranges. It also has a funny name. 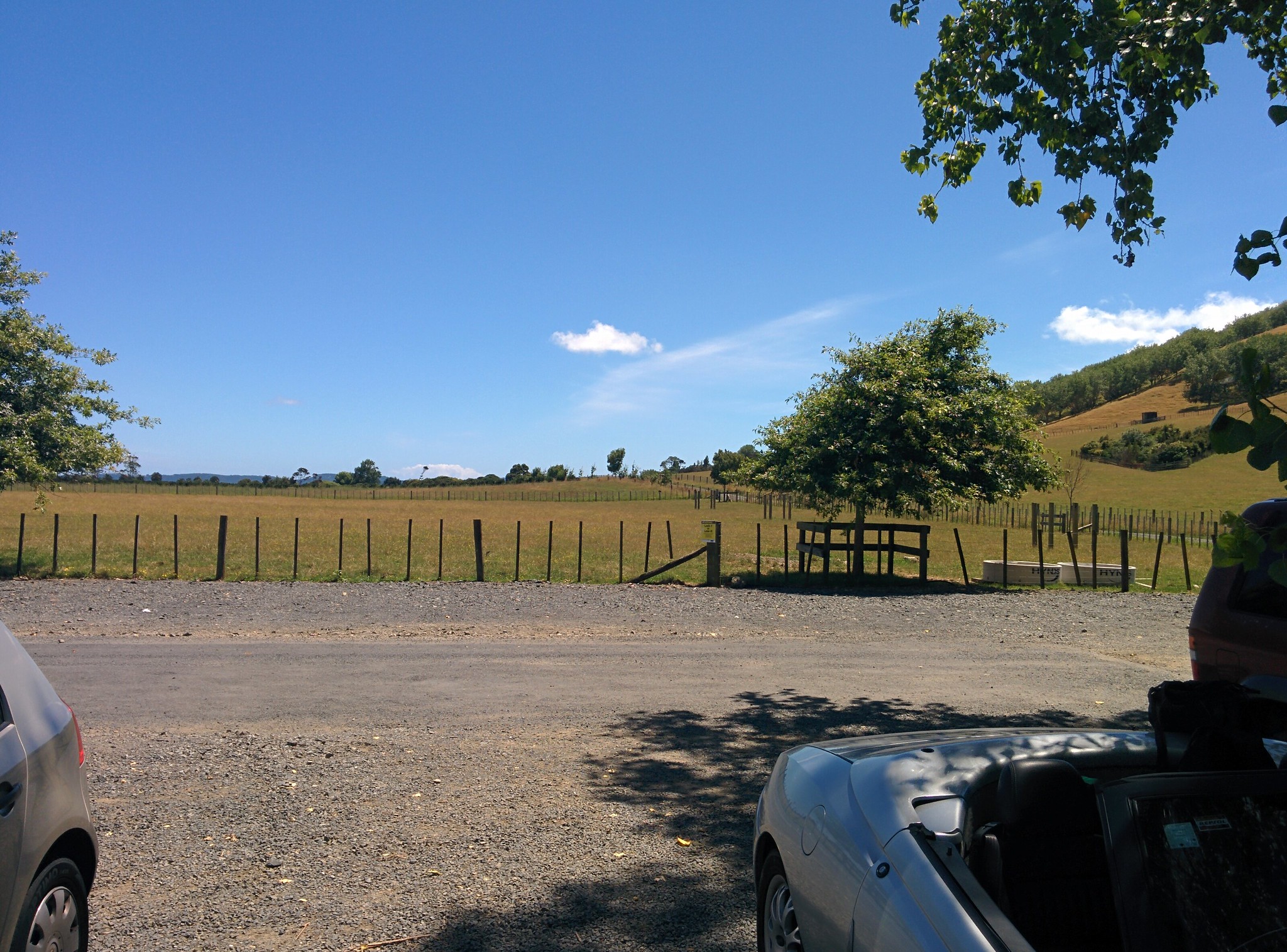 It was a beautiful day for a drive, so Taylor and I saddled up in the Alfa and drove on out. 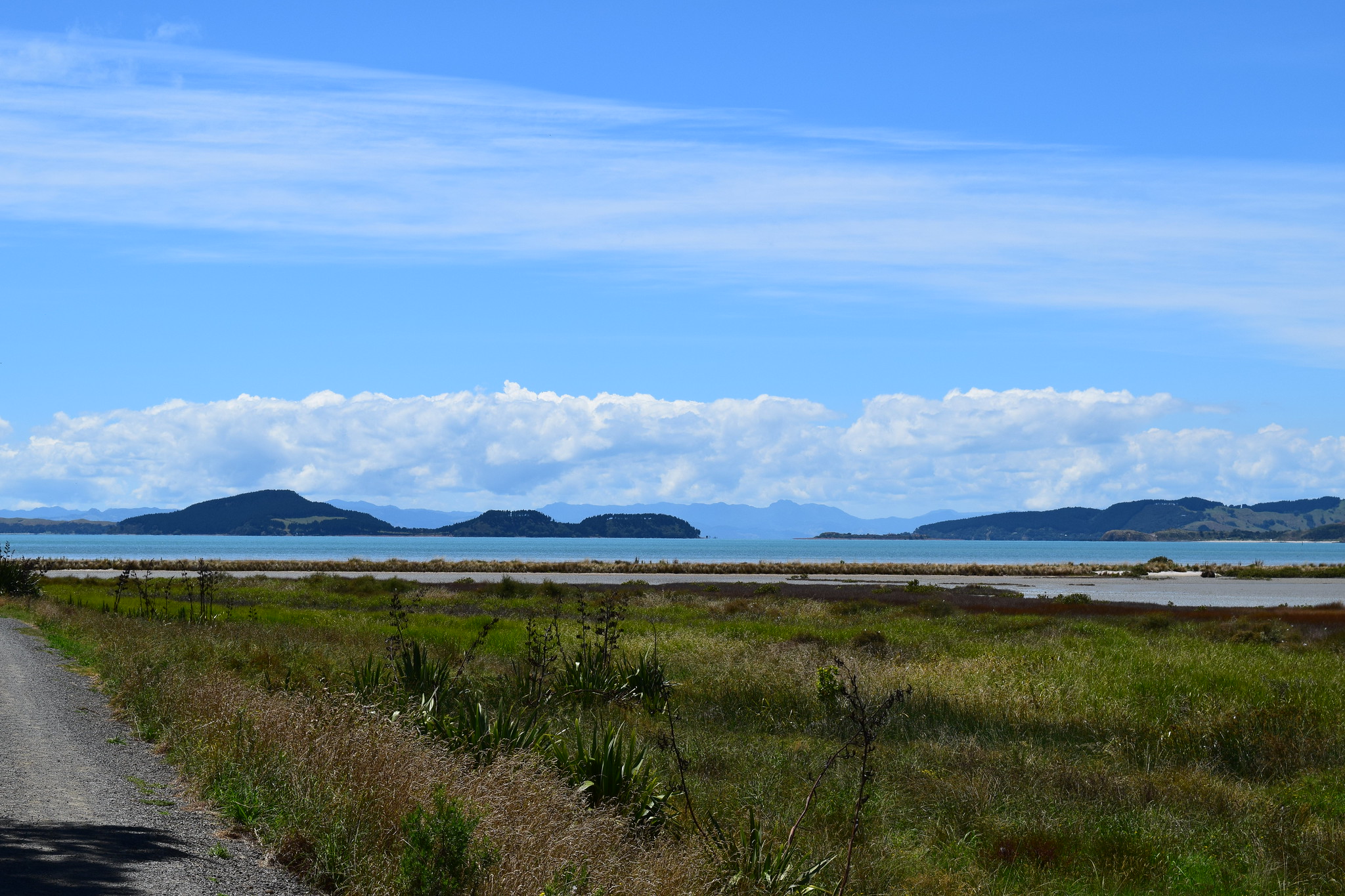 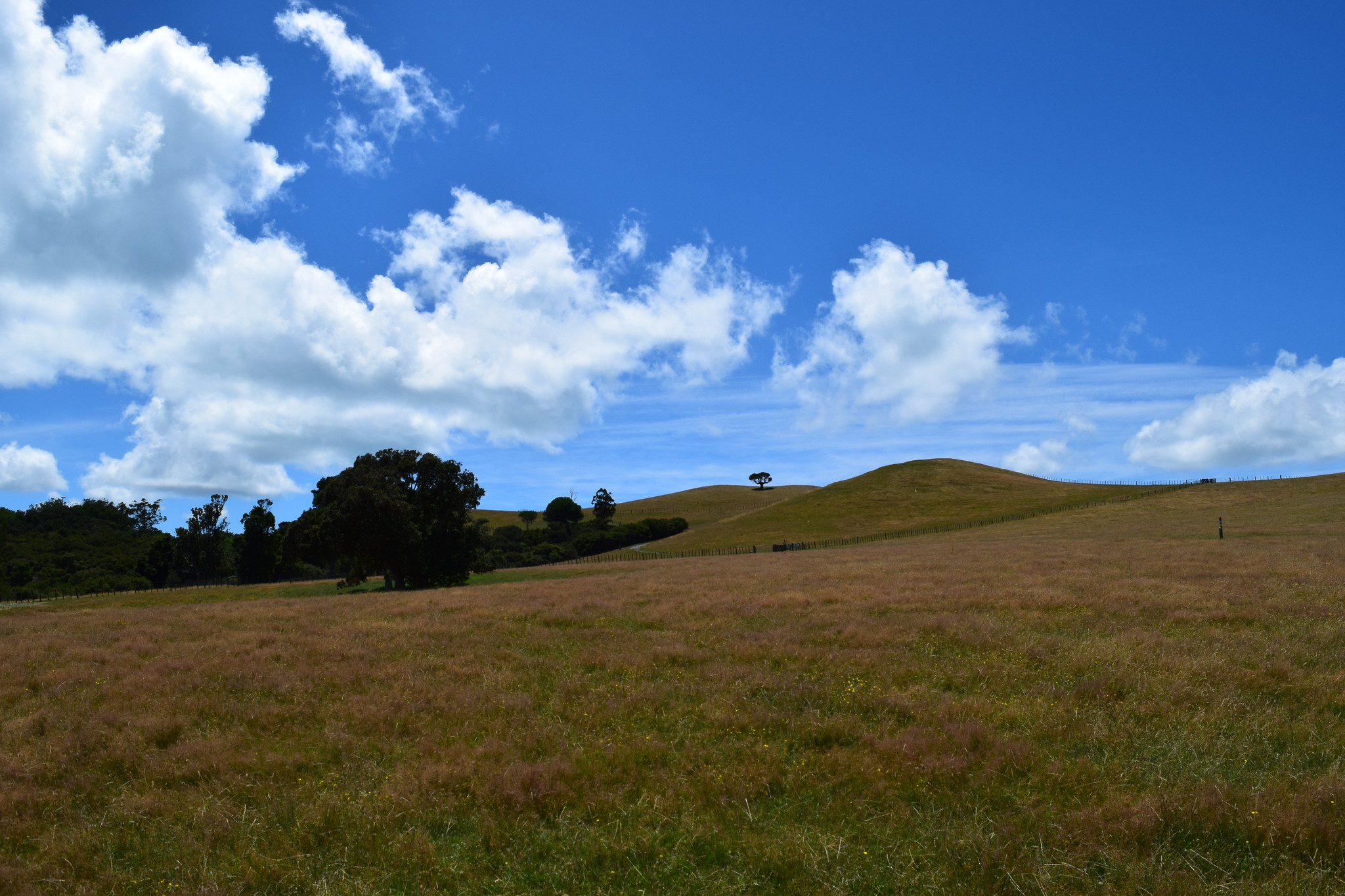 There are a number of tracks running through the park. I had planned a route which would take us along the North coast, to the point, and then back along the South coast to a beach. As with Shakespear Regional Park, the terrain covers some rolling hills and the tracks are fairly well marked, with a notable exception I’ll cover later. 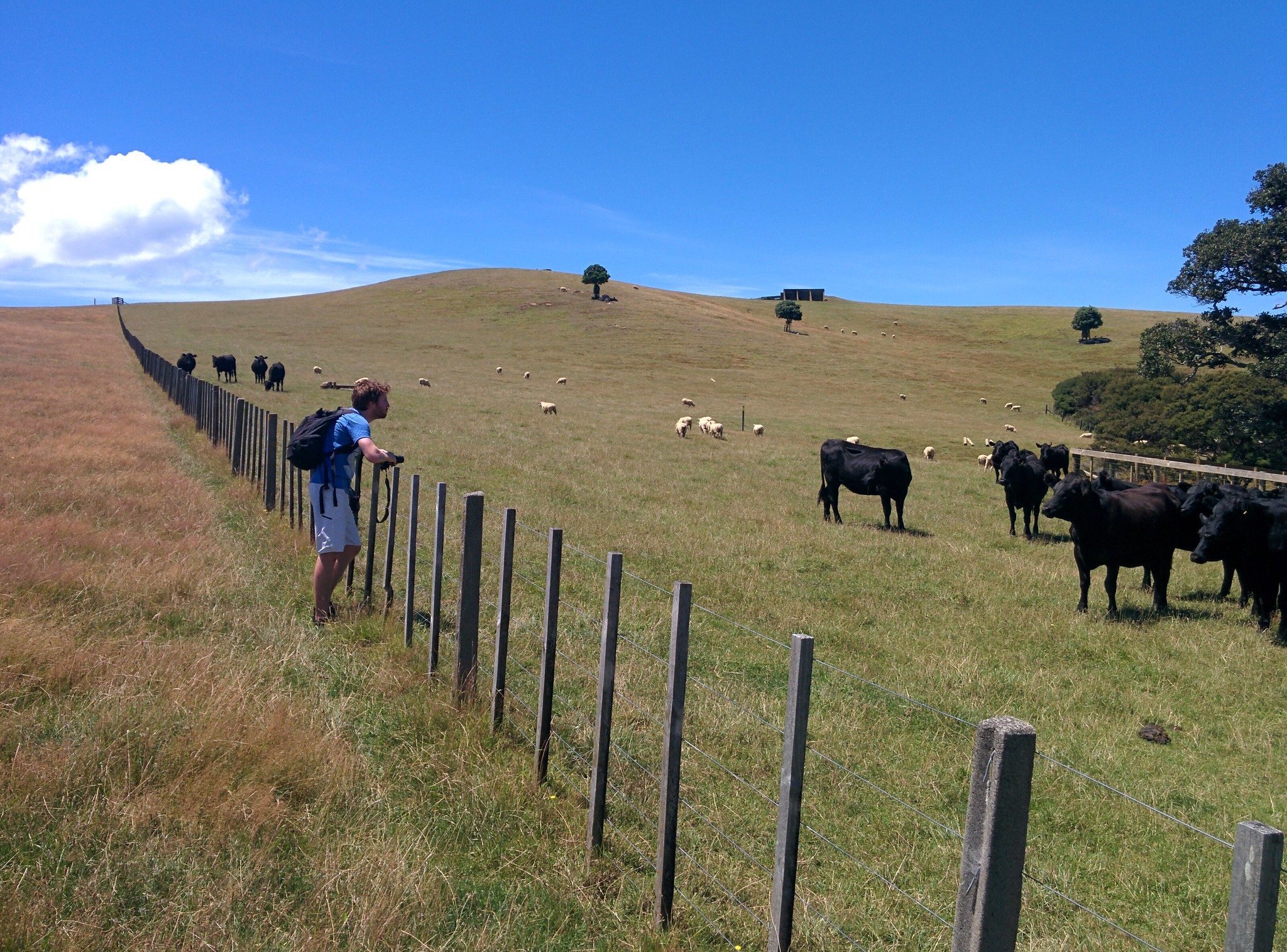 One thing about Taylor is that he fancies himself the Cow Whisperer. This was the first time I got to see him communing with his bovine soul mates, but shockingly the cows do seem to congregate around him when he starts mooing at them. 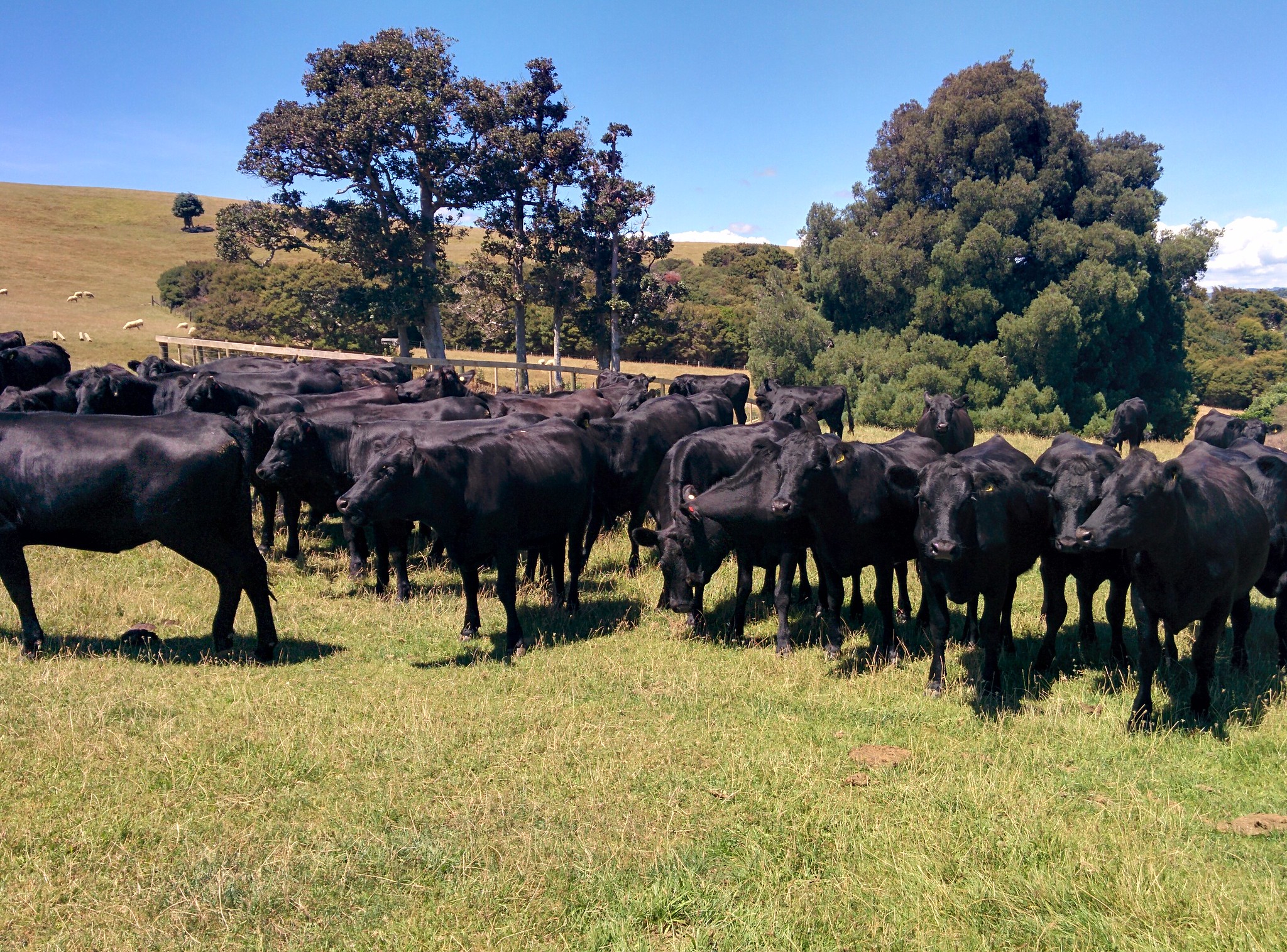 We stood there for, no foolin’, about fifteen minutes while he made moo noises at the cows. By the time we left, he had quite the herd assembled. 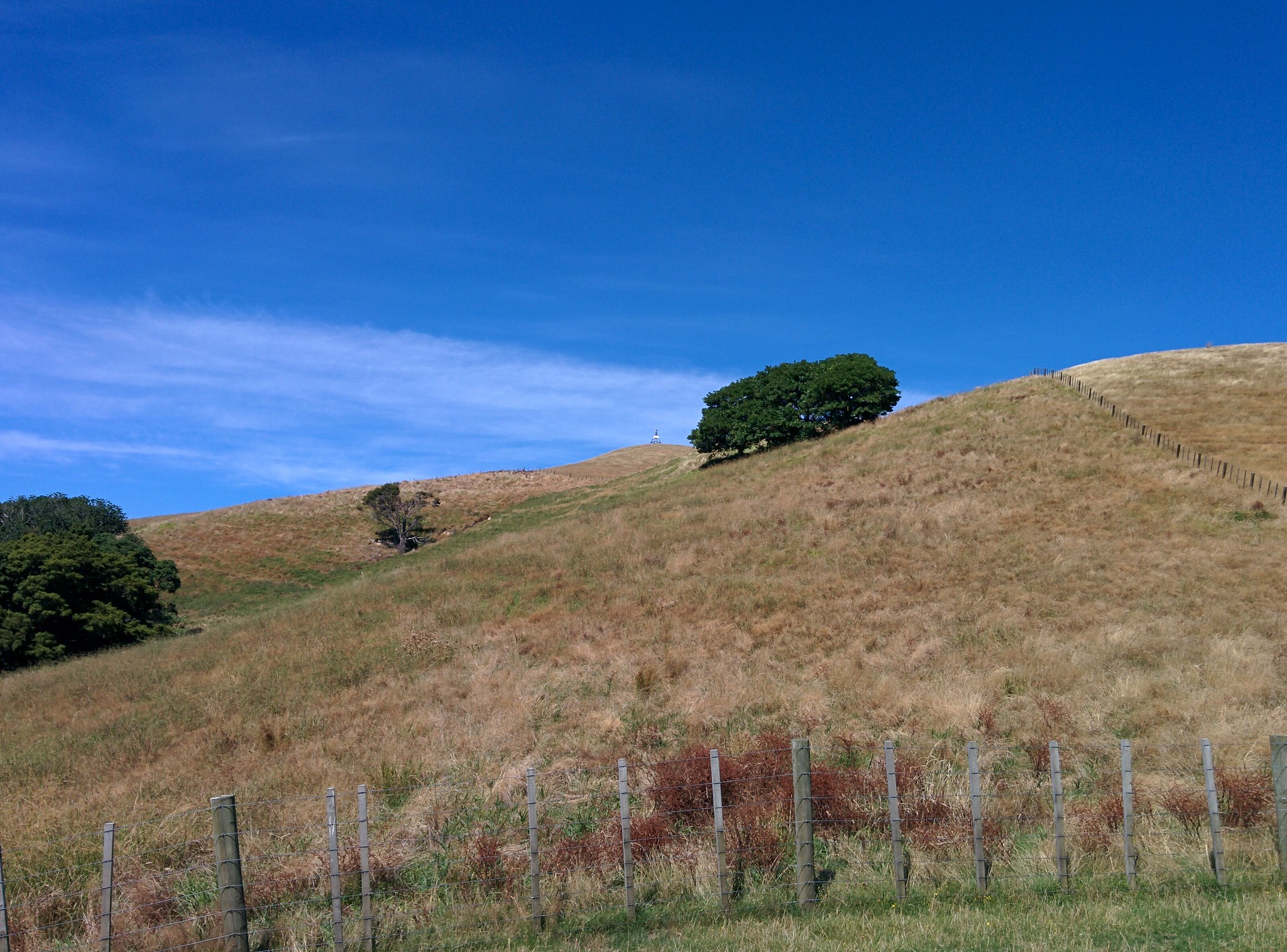 As we moved on from there, we noted an achievement at the top of one of the far hills! You might need to Zoom and Enhance the center of the photo in order to see it. This will also become relevant later. 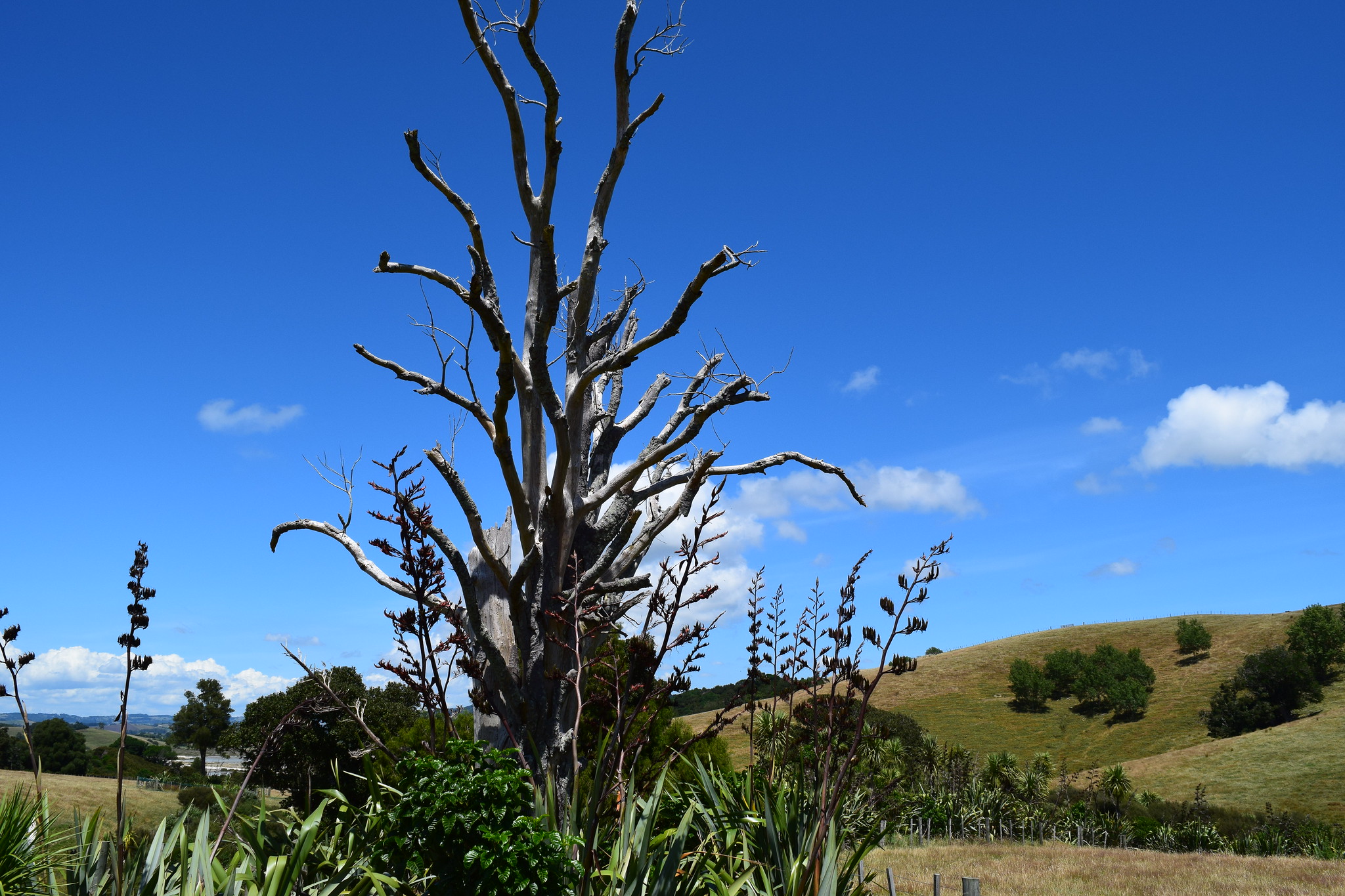 We found this cool-looking tree. Not really apropos of anything else, but there it is. One nice thing about hiking with a professional photographer is that he will often point out cool shots that I would normally miss. 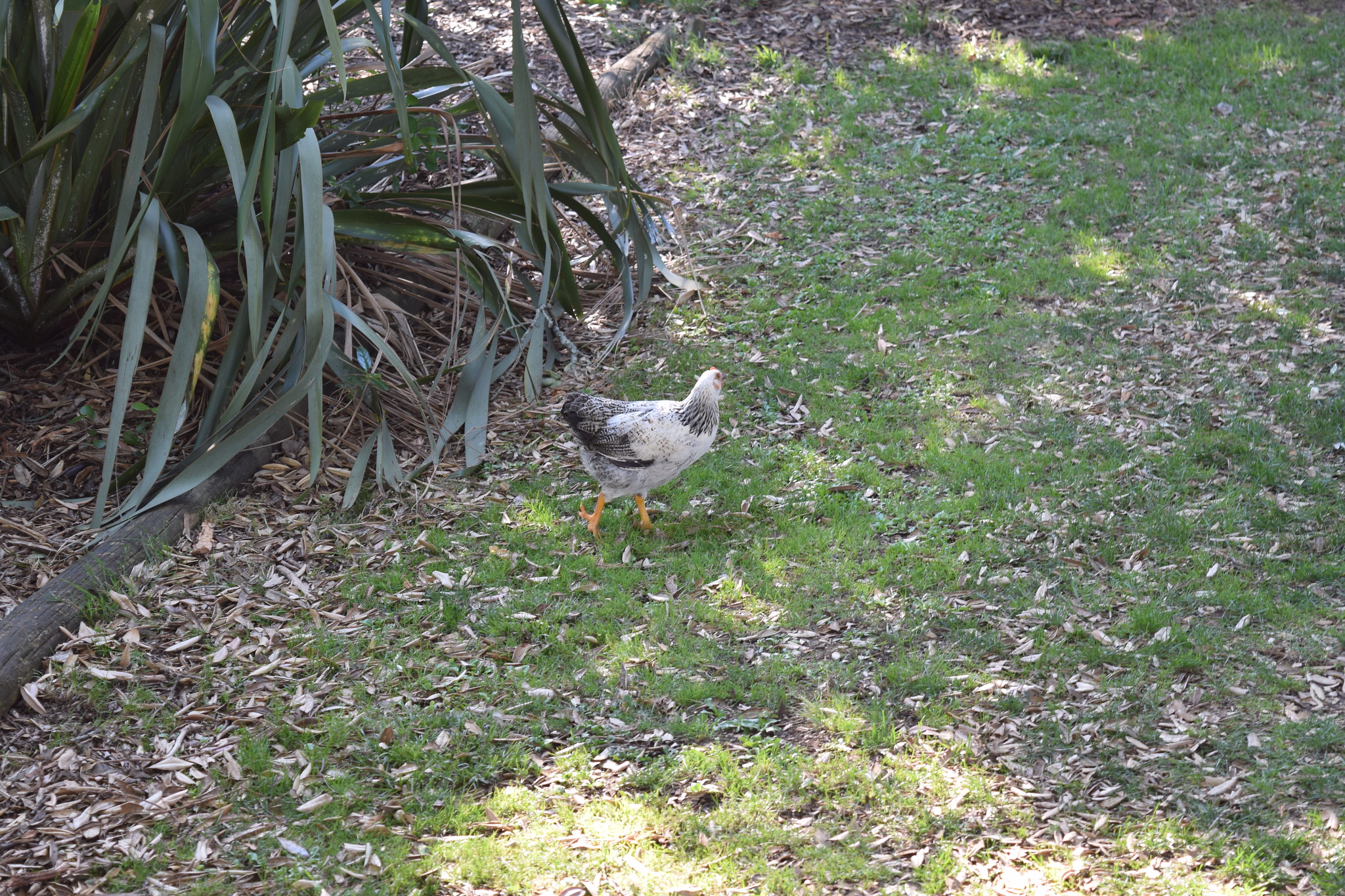 If I had known that lunch would be provided, I wouldn’t have packed one! I need to create a chickens tag. 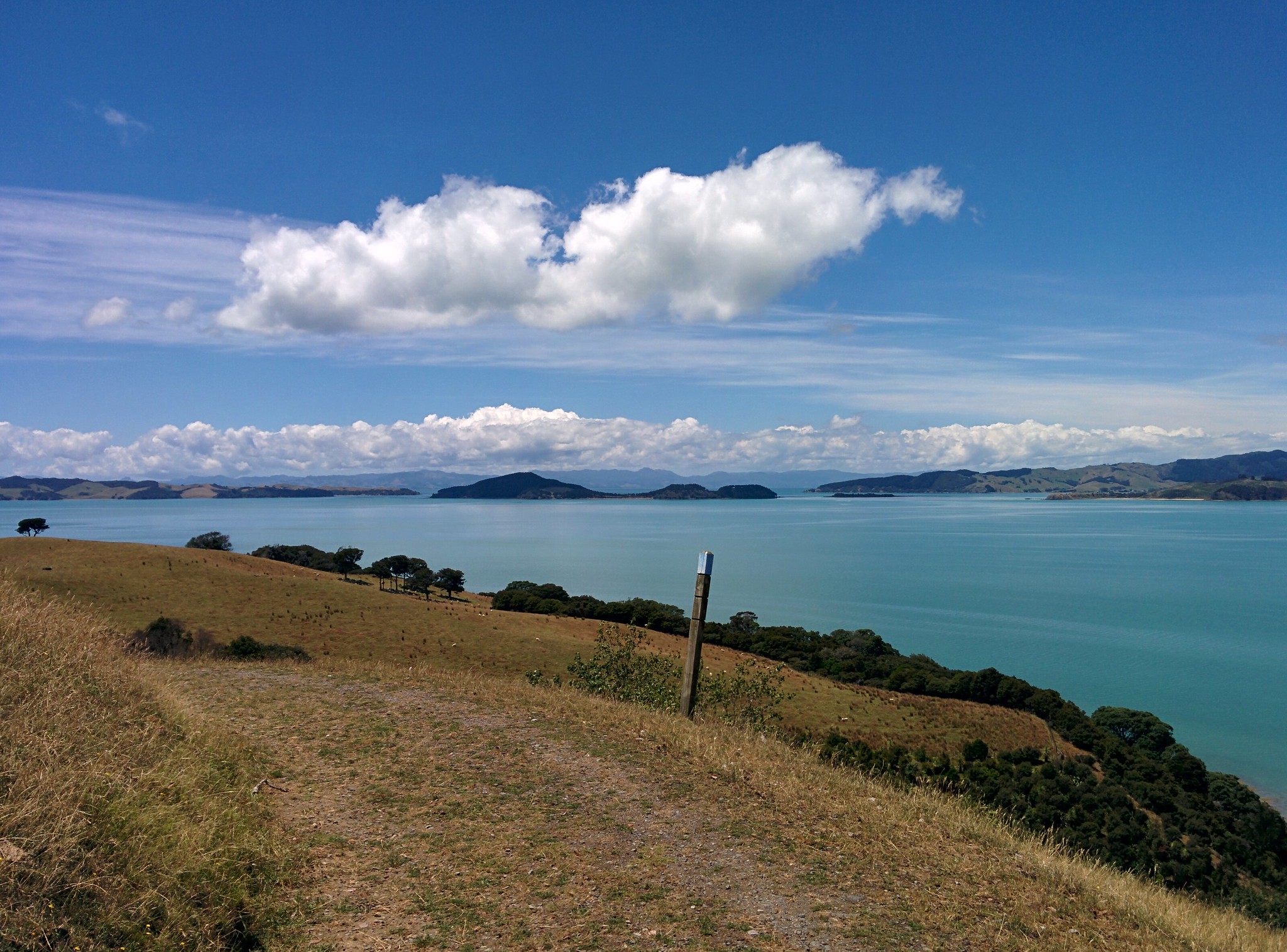 If you tear your eyes from the scenery for a moment, notice the blue blaze. We took the South branch of the Farm Loop up to the Whakakaiwhara Pa Walk, which went out to the top. My plan then was to then make our way to the South coast (Wairoa Bay) and enjoy the beaches there. The Whakakaiwhara Pa track is the one marked with blue blazes. 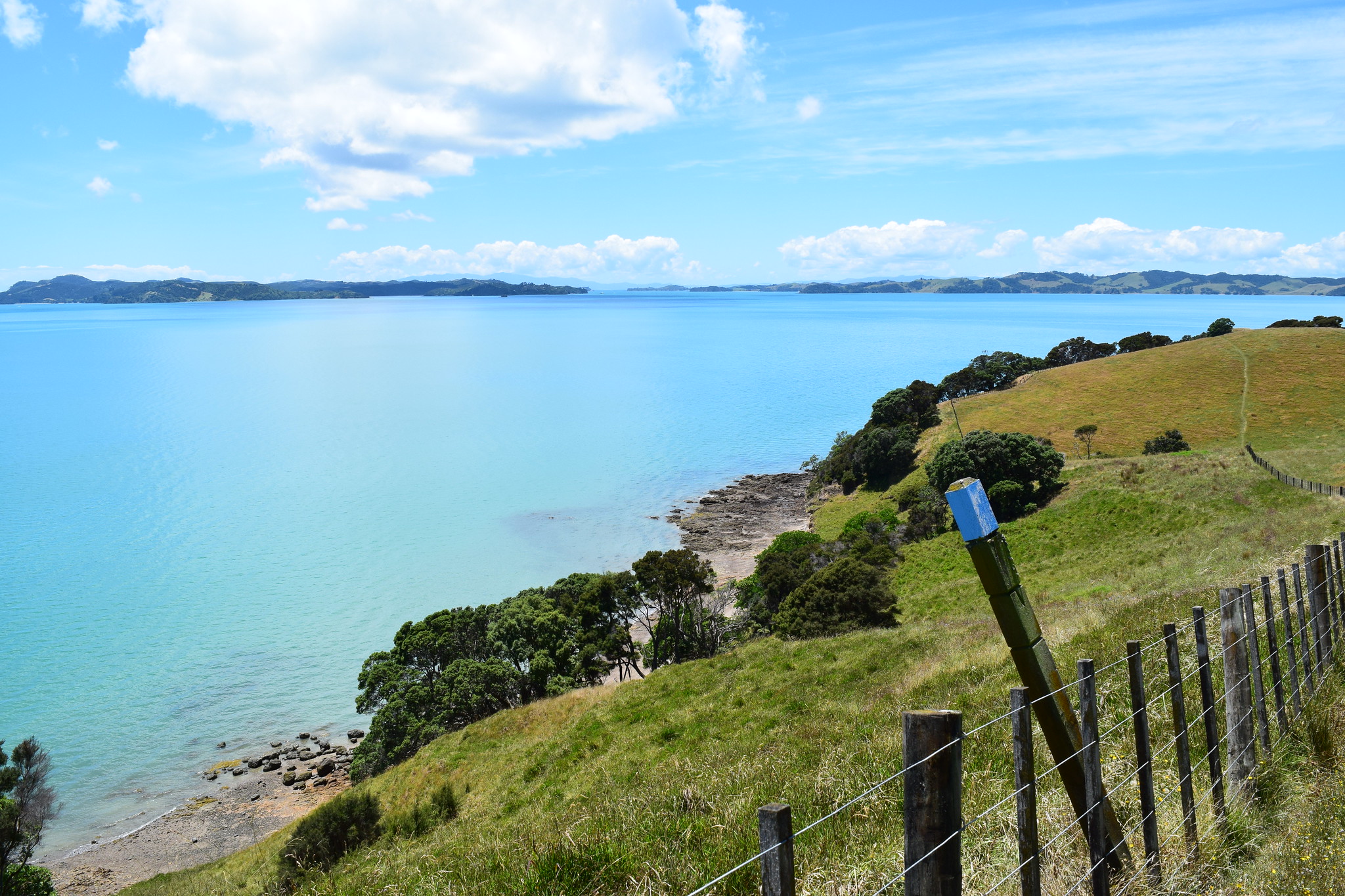 Another blue blaze. As you can see, the path is narrowing enough that we can see the Hauraki Gulf to the North and Wairoa Bay to the South at the same time! 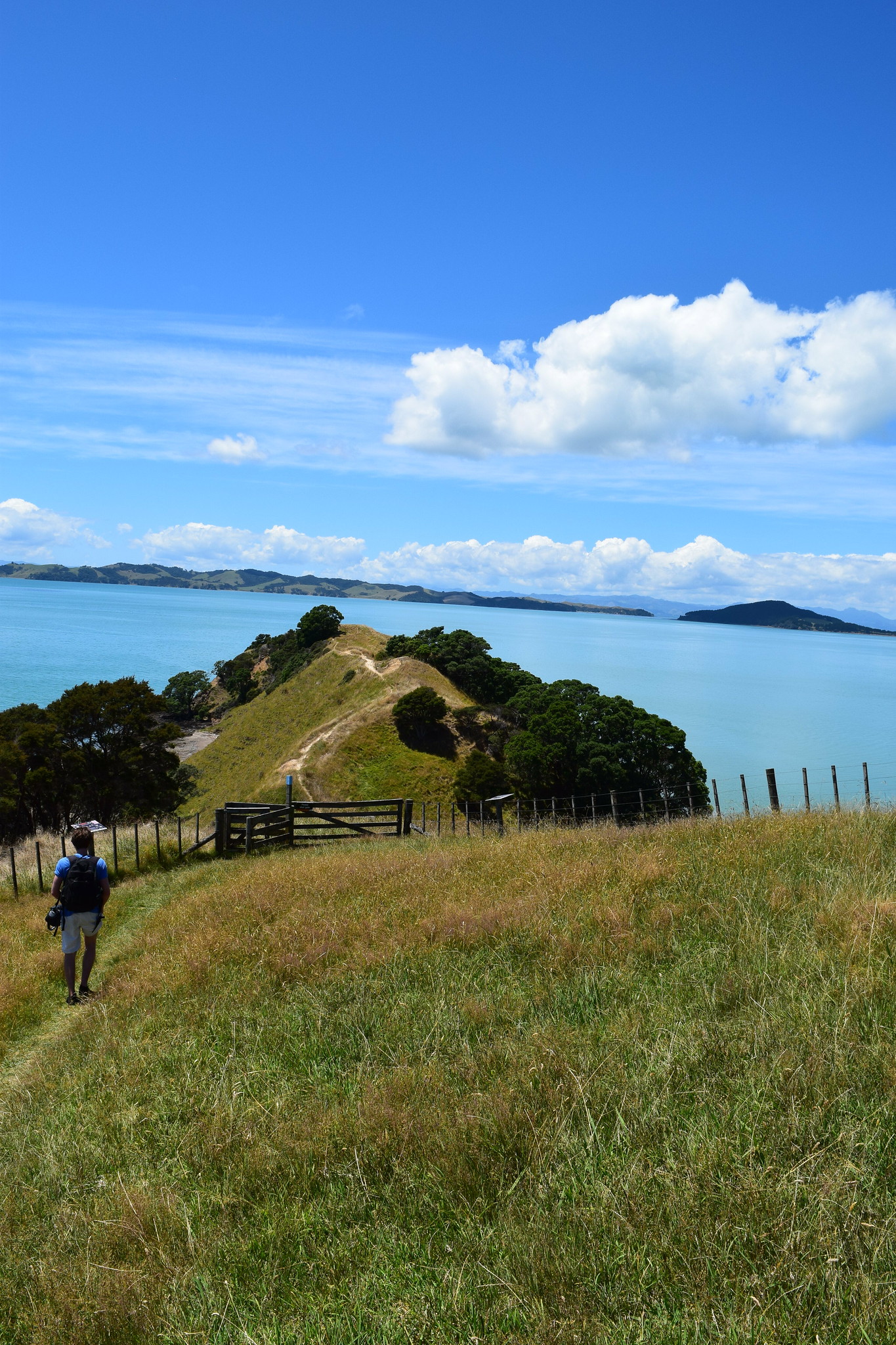 As we reached the point, it had narrowed so much that it was really like a point! 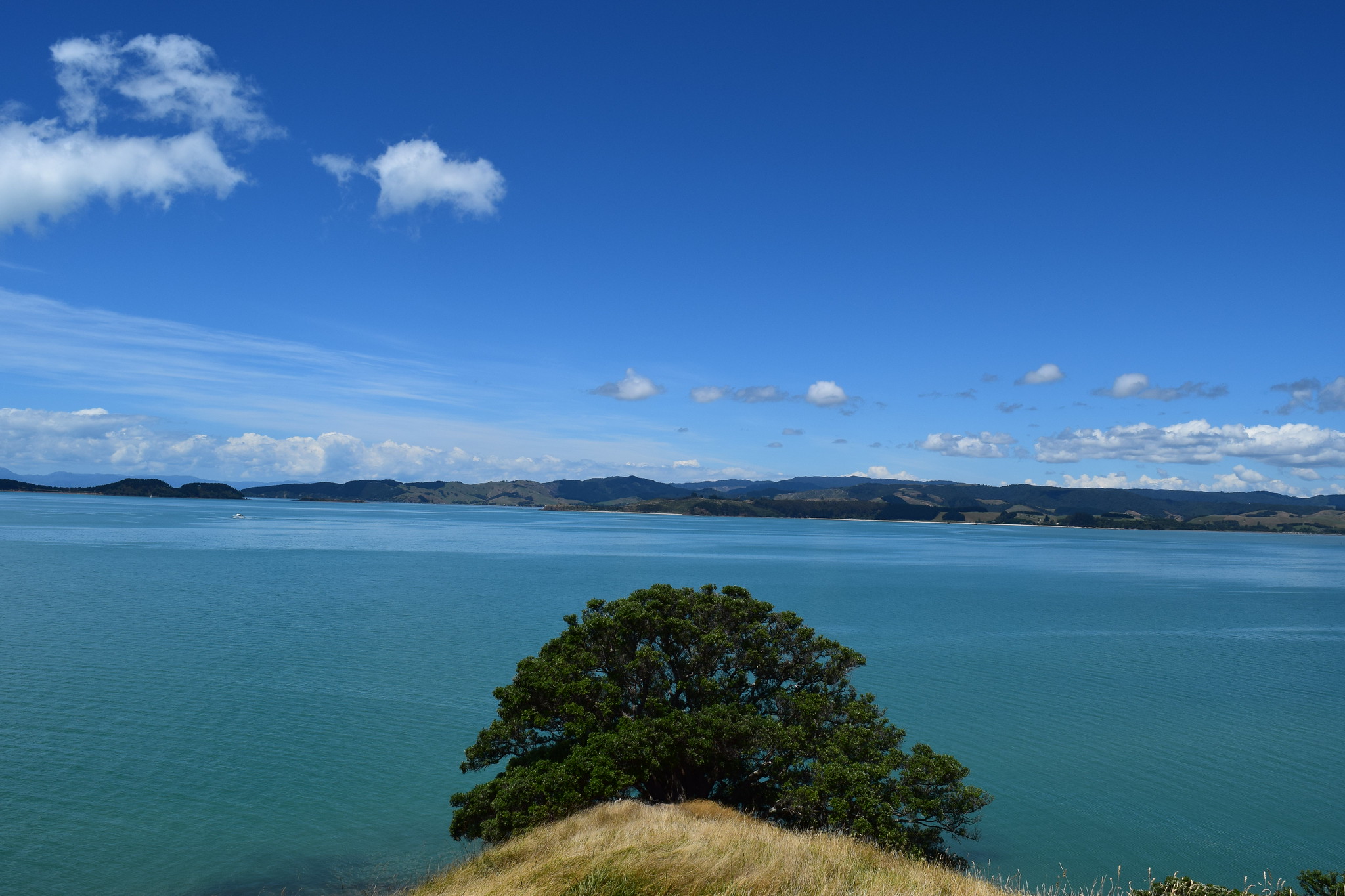 It’s like standing on the bow of a ship! (Taylor and I didn’t do the Titanic thing, thanks for asking). 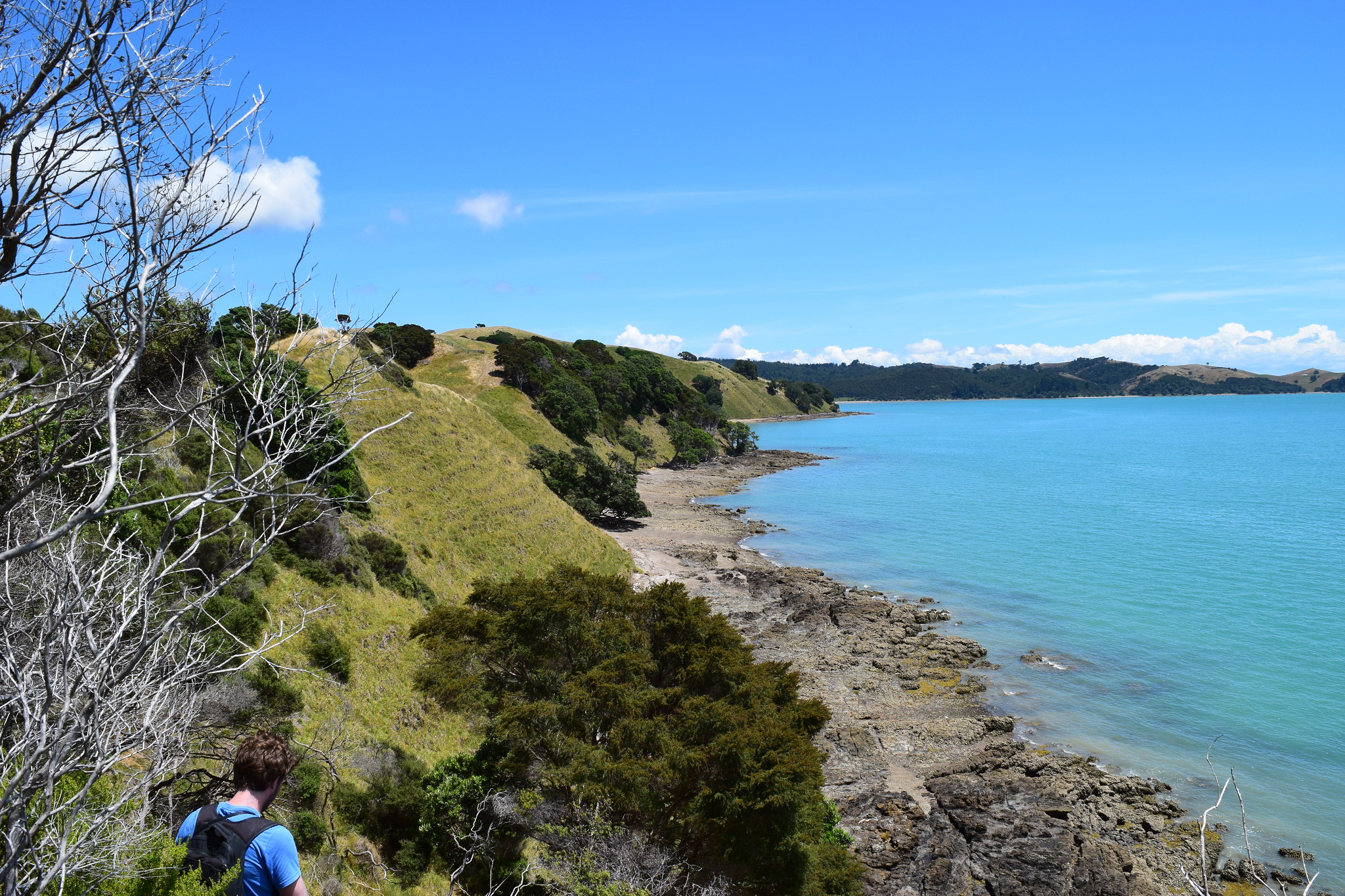 On the way back, Taylor had (what he thought was) a brilliant idea: why not just climb down the cliff here and go to this beach? We should be able to walk along the coastline and then take the Coastal Walk track up to where it rejoins the farm loop.

Taylor is a young, fit skateboarder with a mountain goat’s sense of balance, and he hopped right down the cliff face in what looked like about three jumps. My descent was…less graceful, and could best be described as a semi-controlled fall. I lost a decent chunk of skin on my left hand, which I will spare you the picture of, but I made it down as well. 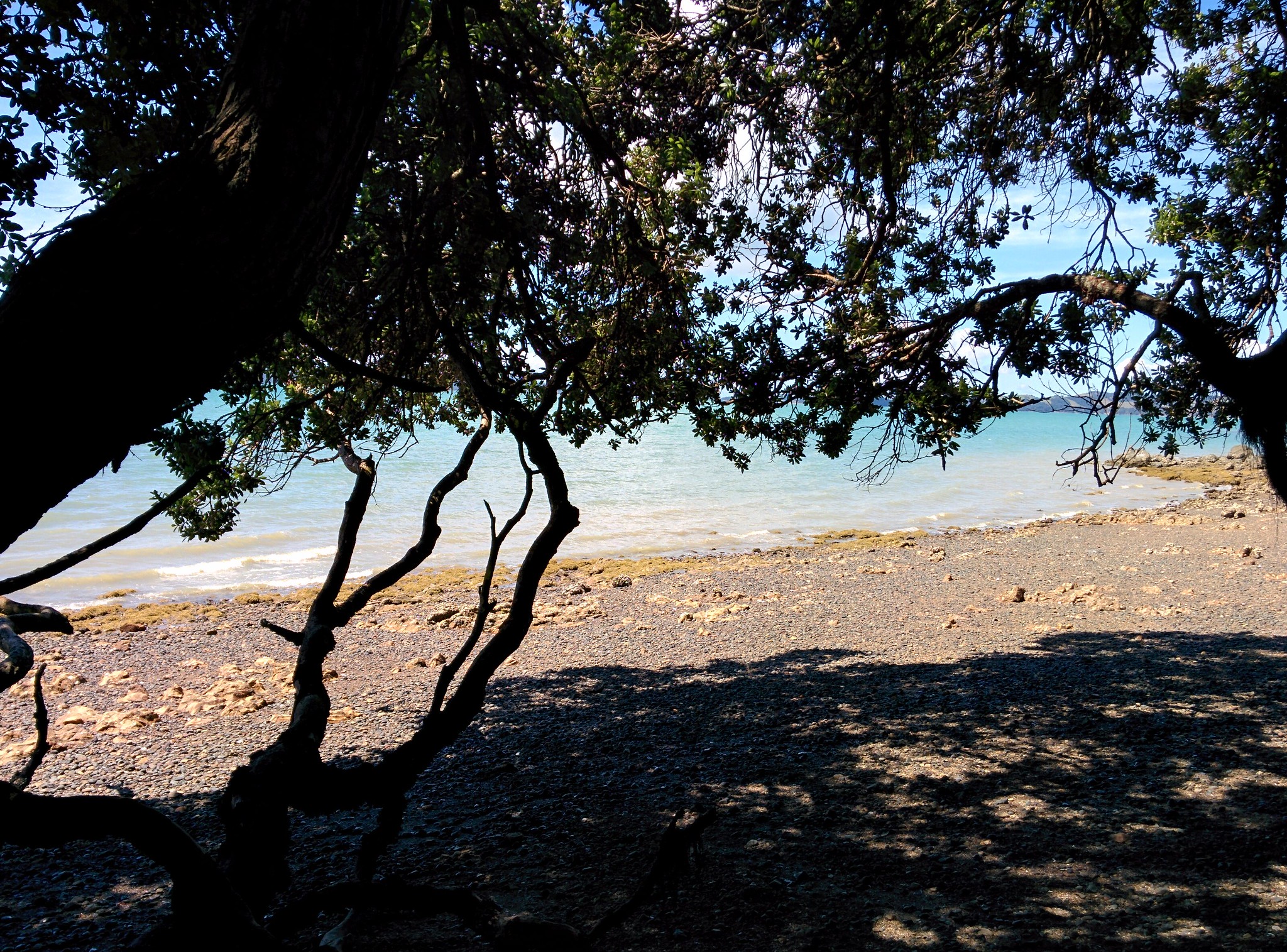 The area down by the beach was, admittedly, lovely. We sat down and had lunch, then went for a swim. Salt water on recent cuts is not the most pleasant of experiences, but I convinced myself it was good for it, hoping that by sheer force of will I could repel any nasty bacteria intent on eating my flesh. 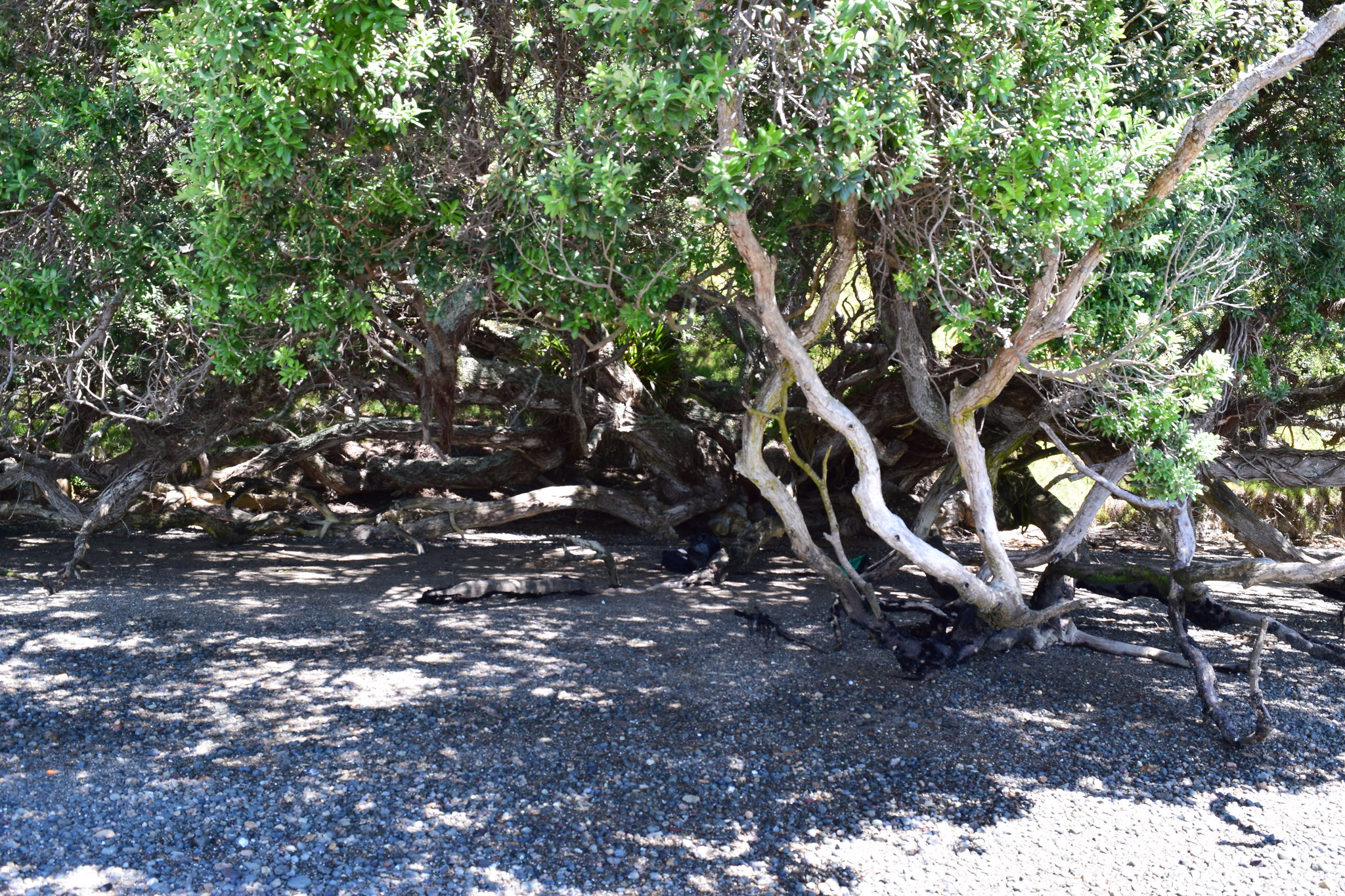 The shade where we ate our lunch. You can see my trusty green backpack under the tree. 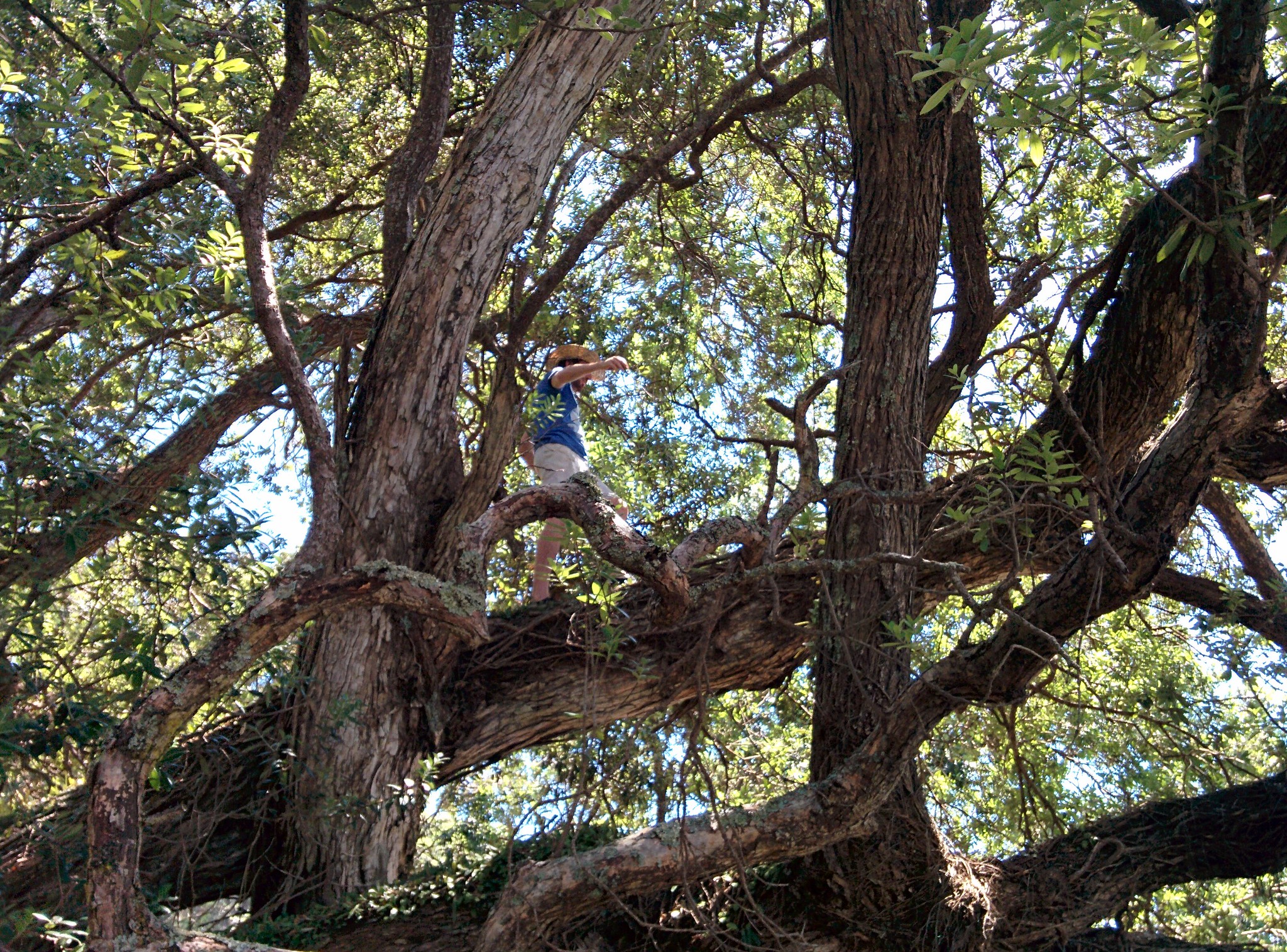 Before departing, Taylor decided he was going to climb the tree. 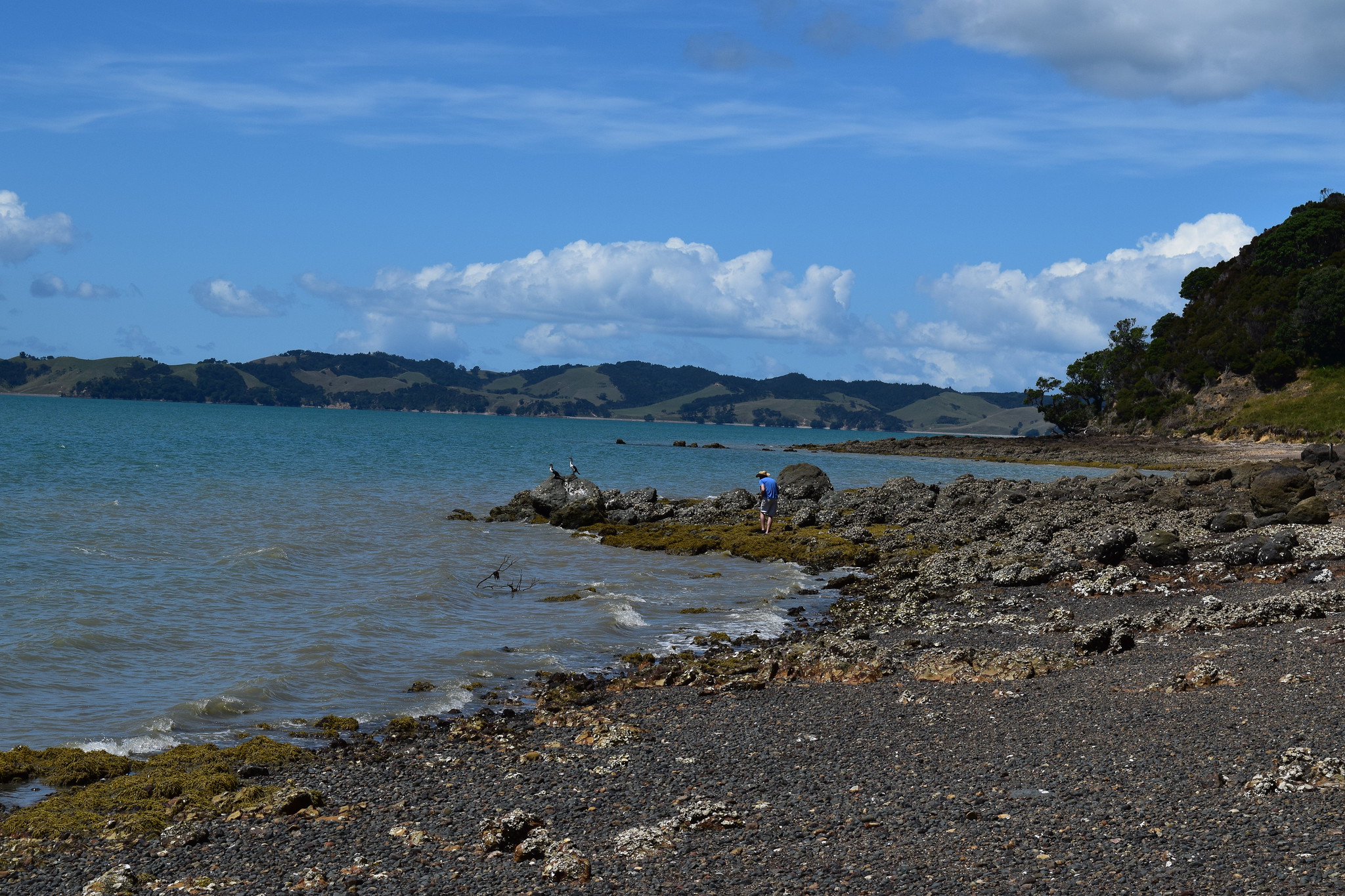 So I’ll spare you a bunch of pictures of long, rocky coast. We walked for a while (and found heaps of garbage, which we put in a trash bag Taylor found). Taylor even found a straw hat to wear!

Looking at the map, we walked about three kilometers of coast. Which is a problem…we were really supposed to walk a little more than two. We arrived at the stream that showed us we had gone too far. I guess the Coastal Walk trail isn’t very well marked (we never did find it). 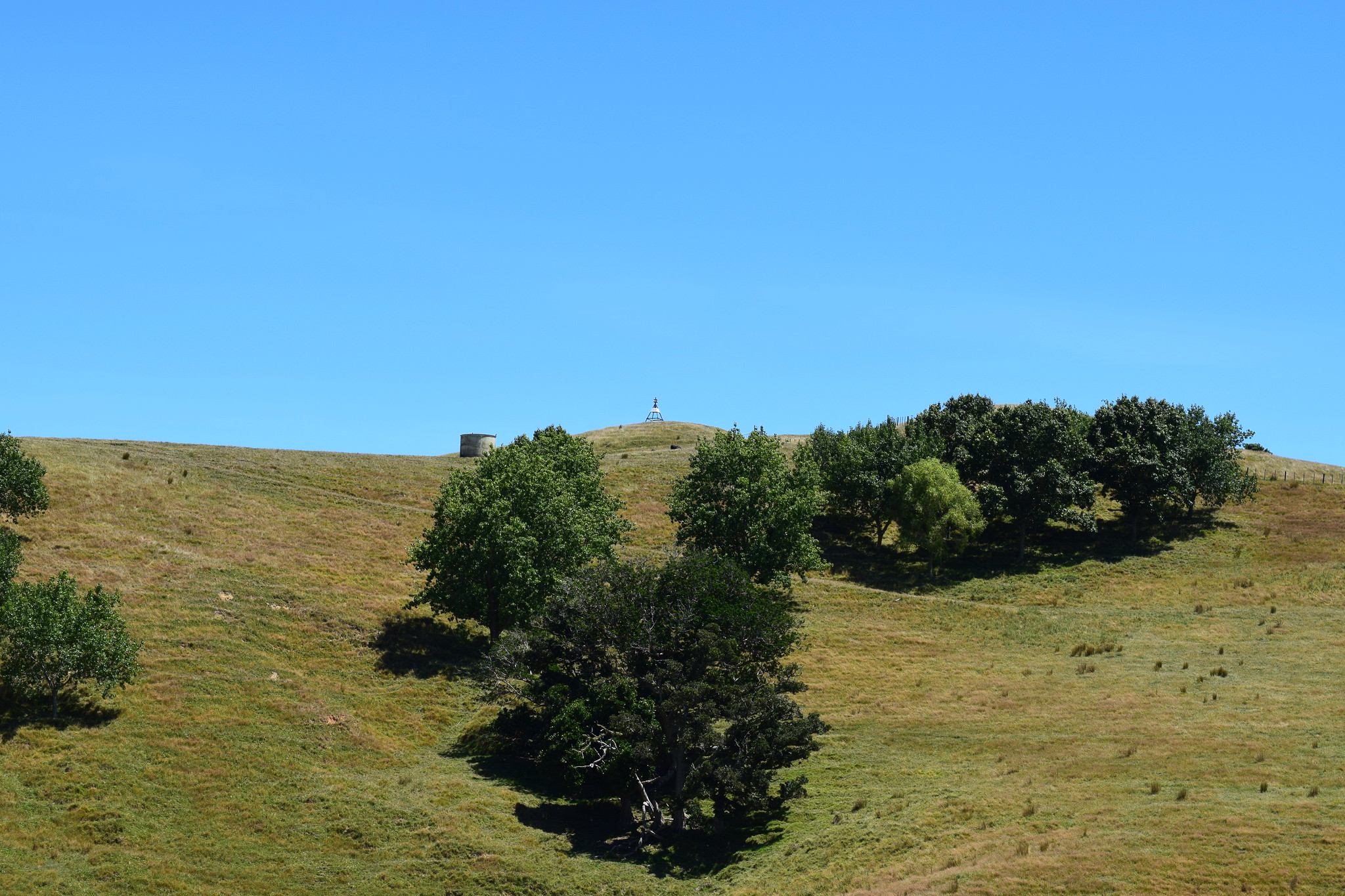 Taylor ran up the side of the hill to do some scouting (as he does). He came down and said that he saw the achievement (and I felt happy that I have apparently convinced him to call them achievements too). I think this may be the first time I used those trig sites for something approximating their intended purpose.

Anyway, we walked up, found a red blaze for the farm loop trail, and reunited with the path to walk back to the carpark. 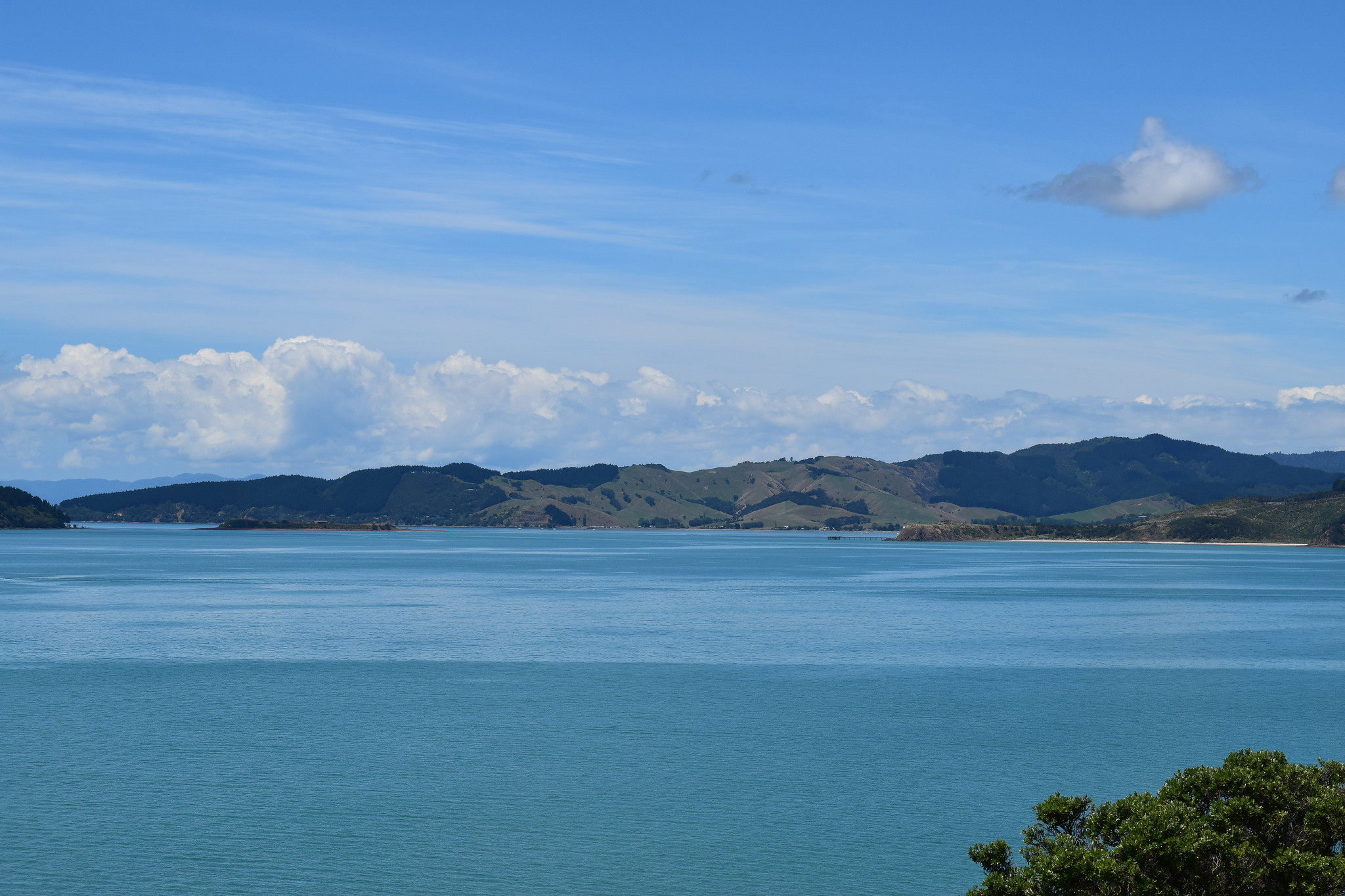 So, that’s Duder Regional Park. Definitely a beautiful place to check out on a pretty day! Just be careful when climbing down the cliffs!

Next post is another fun little adventure, this time with a lot of people! See you then!