This is it. I’ve been hearing for so long about the wonders of the South Island, and now I’m going to experience it for myself!

I planned my trip for the last two weeks of February. I left on the 14th (a Valentine’s Day gift to myself, I guess) and came back on the 27th. Not peak tourist season, thankfully, but still Summer so I still expected there to be a lot of people there.

I try to intentionally avoid pre-planning more than the bare essentials. I always feel conflicted about this. On one hand, pre-planning means I lose spontaneity and adaptability (and requires a lot of work). On the other, sometimes going in without a plan means I miss out on a cool experience or something I want (or need) is all booked out. I tried to compromise by planning the framework of the trip while still leaving a lot of room for improvisation within the framework.

The first hitch came before I’d even left Auckland. My plan was to rent a car to drive down to Wellington after church on Sunday. But by Friday, every car rental place was completely sold out of rental cars! I must have called seven or eight different places, and nobody had anything available. Was I going to be completely out of luck at the very beginning?

Nope, because unlike the rental places, Air New Zealand understands how tourism works. I was able to buy a plane ticket literally two days before my flight for very reasonable amounts of money. Flying domestically in New Zealand is a complete joy compared to the US: it’s cheap, they don’t treat passengers like terrorists, and because New Zealand is so small every domestic flight is extremely short. And it’s New Zealand; I usually go for an aisle seat, but when flying domestically I opt for a window one instead because the views are most excellent both for takeoff and landing.

By the time I had deplaned in Wellington and taken the bus to the city center, it was dark enough that my camera would have been useless. But I had a lovely meal at Sweet Mother’s Kitchen, a surprisingly good Cajun-style restaurant just down the street from where I was staying. Say what you will about the weather; Wellington has a very vibrant nightlife that I’ve remarked very strongly on both of the times I’ve been there.

The next morning, I took the bus to the ferry terminal. Rather than flying directly to the South Island, which would unquestionably have been cheaper, I decided to take a ferry across the Cook Strait from Wellington to Picton.

(Geography note for nerds such as myself: sailing from Wellington on the North Island to Picton on the South Island involves, and I am not making this up, sailing West and slightly North. Due to the orientation of the two islands, the Northerly bits of the South Island actually stick up more North than the Southerly bits of the North Island. This is one of those wonky things (like how Reno, NV is further West than Los Angeles, CA) that defy the oversimplified geography many of us hold in our heads.) 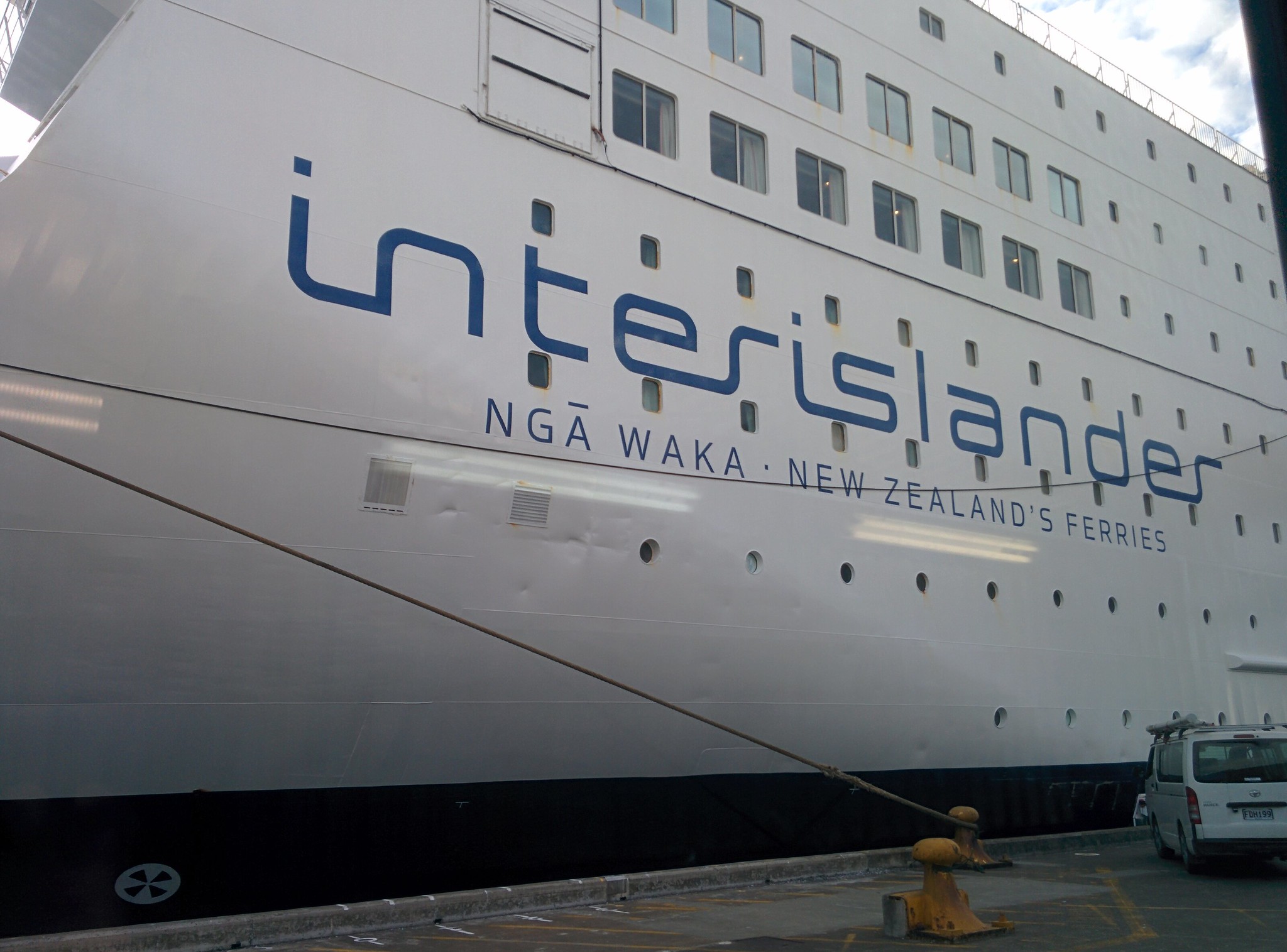 The ferry is properly massive. It contains several parking decks, two movie theaters, two cafes, a shop, some sleeping quarters, and a number of viewing decks and seating areas. 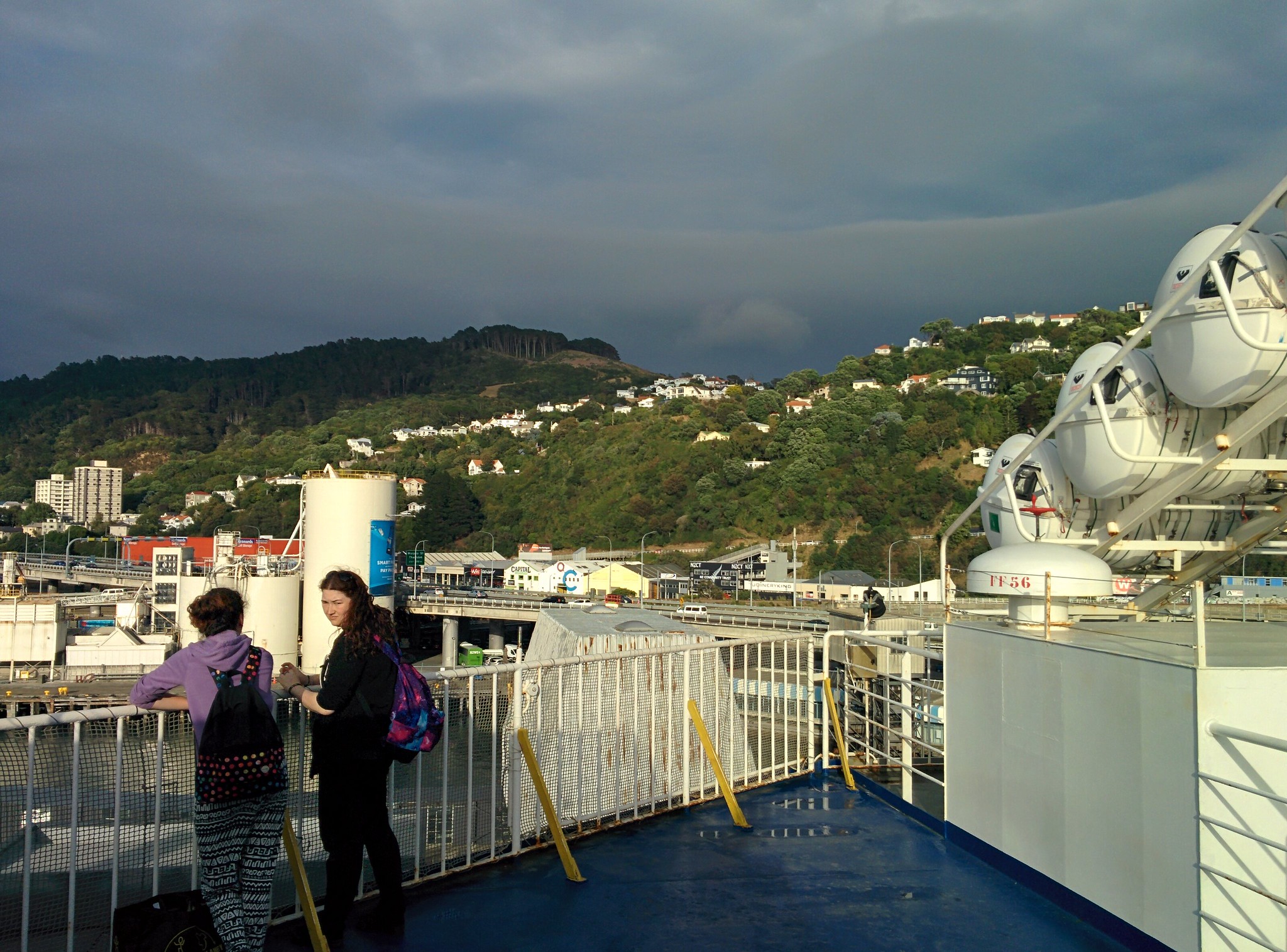 Were the ferry a building, I’m fairly sure it would be the largest building in Wellington. 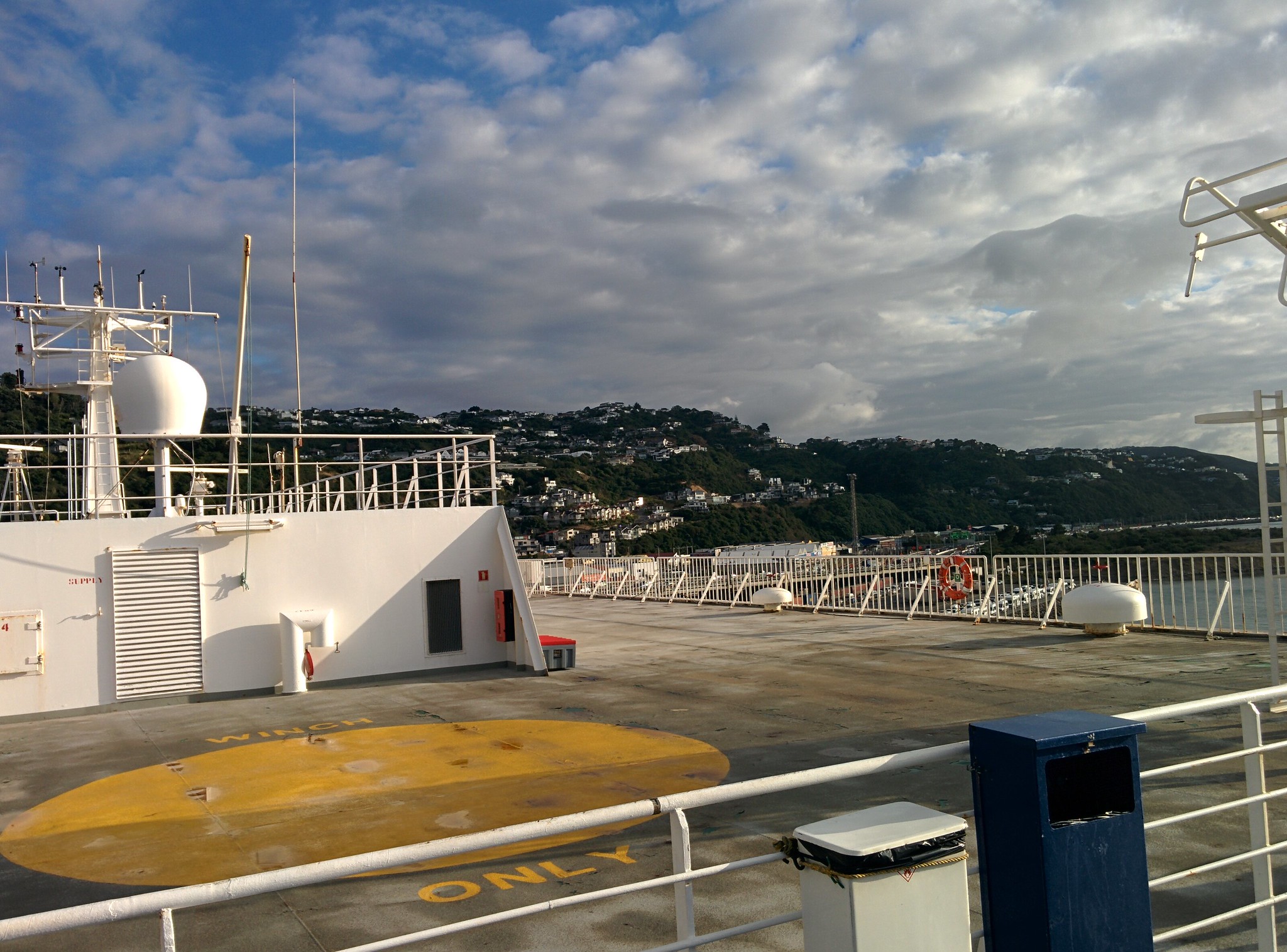 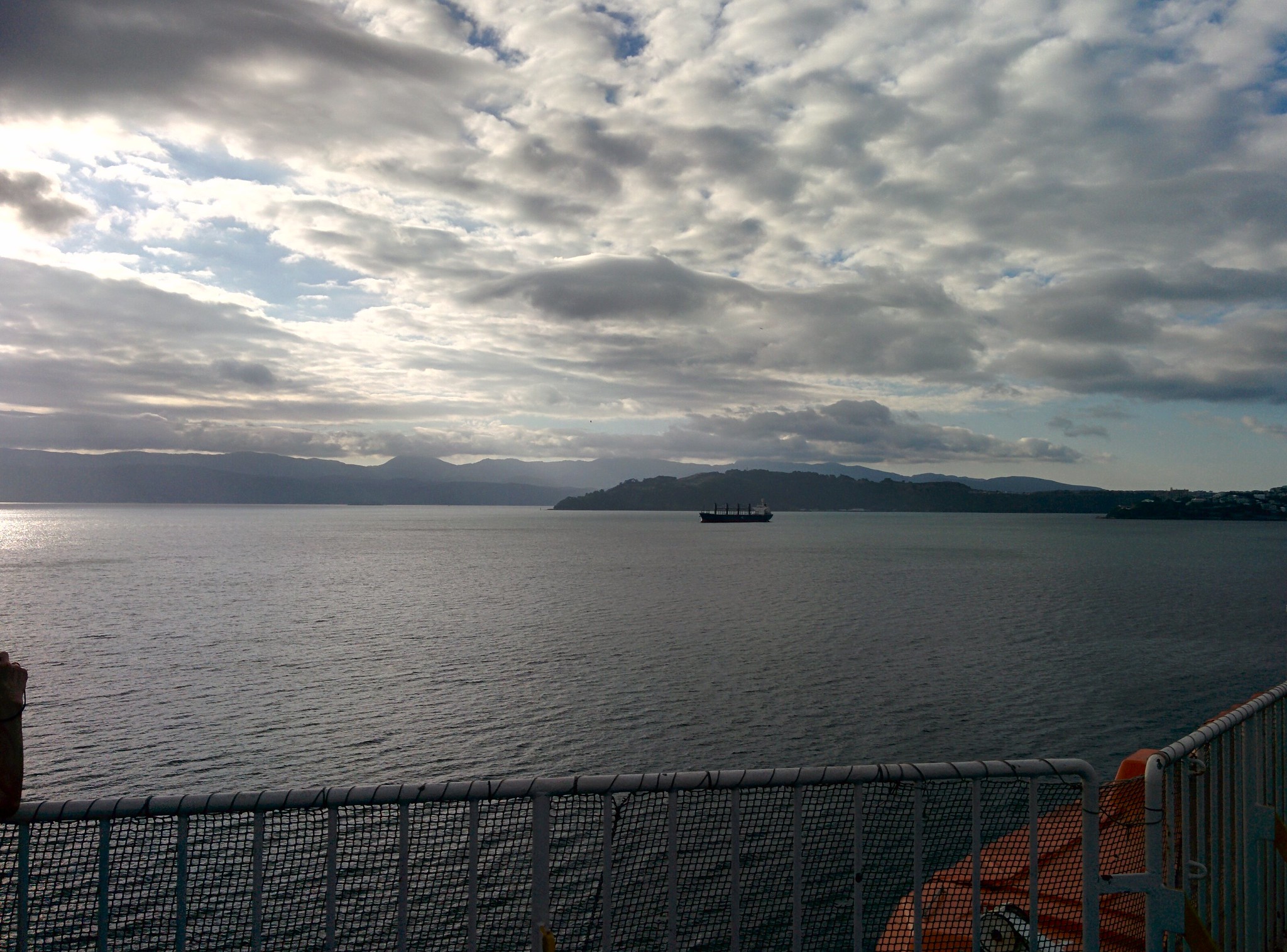 The Cook Strait is fairly narrow and well-traveled. We were almost never out of sight of land and frequently saw other ships. 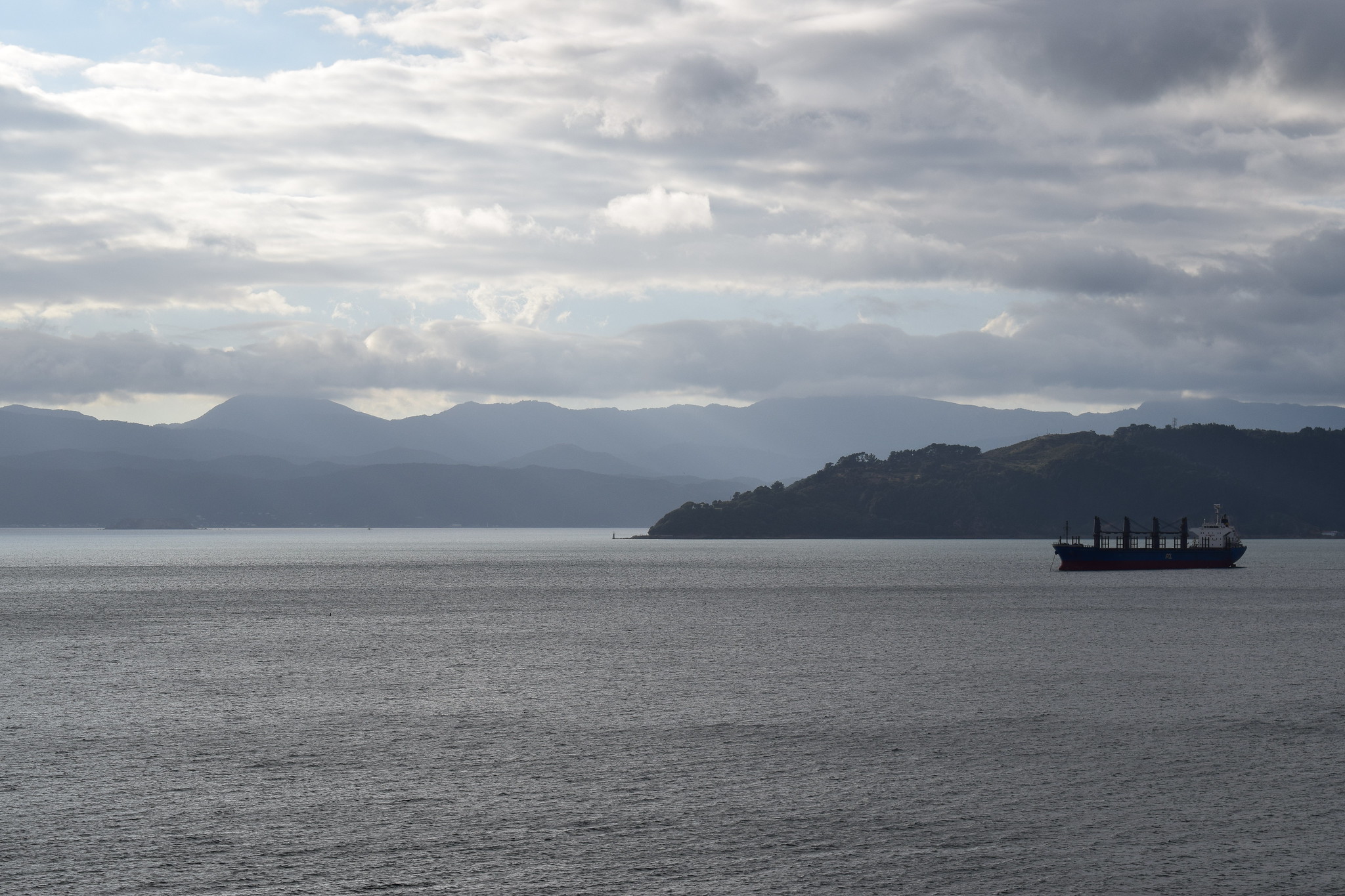 Zooming in shows the mountains of the South Island in the background. 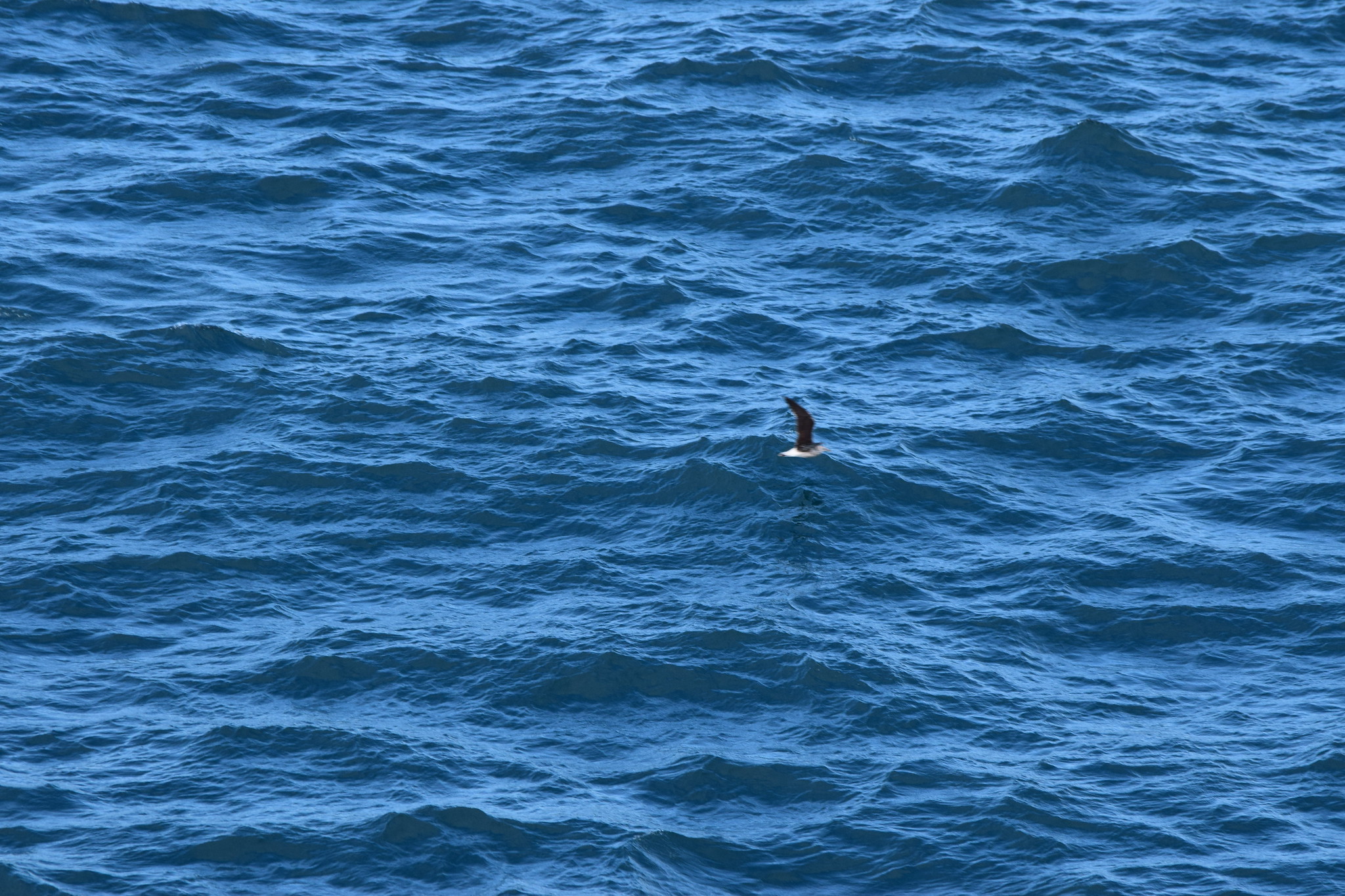 I was hoping to see some aquatic life on this trip, but sadly if there were any sea creatures I didn’t spot them. I did see a bird though! 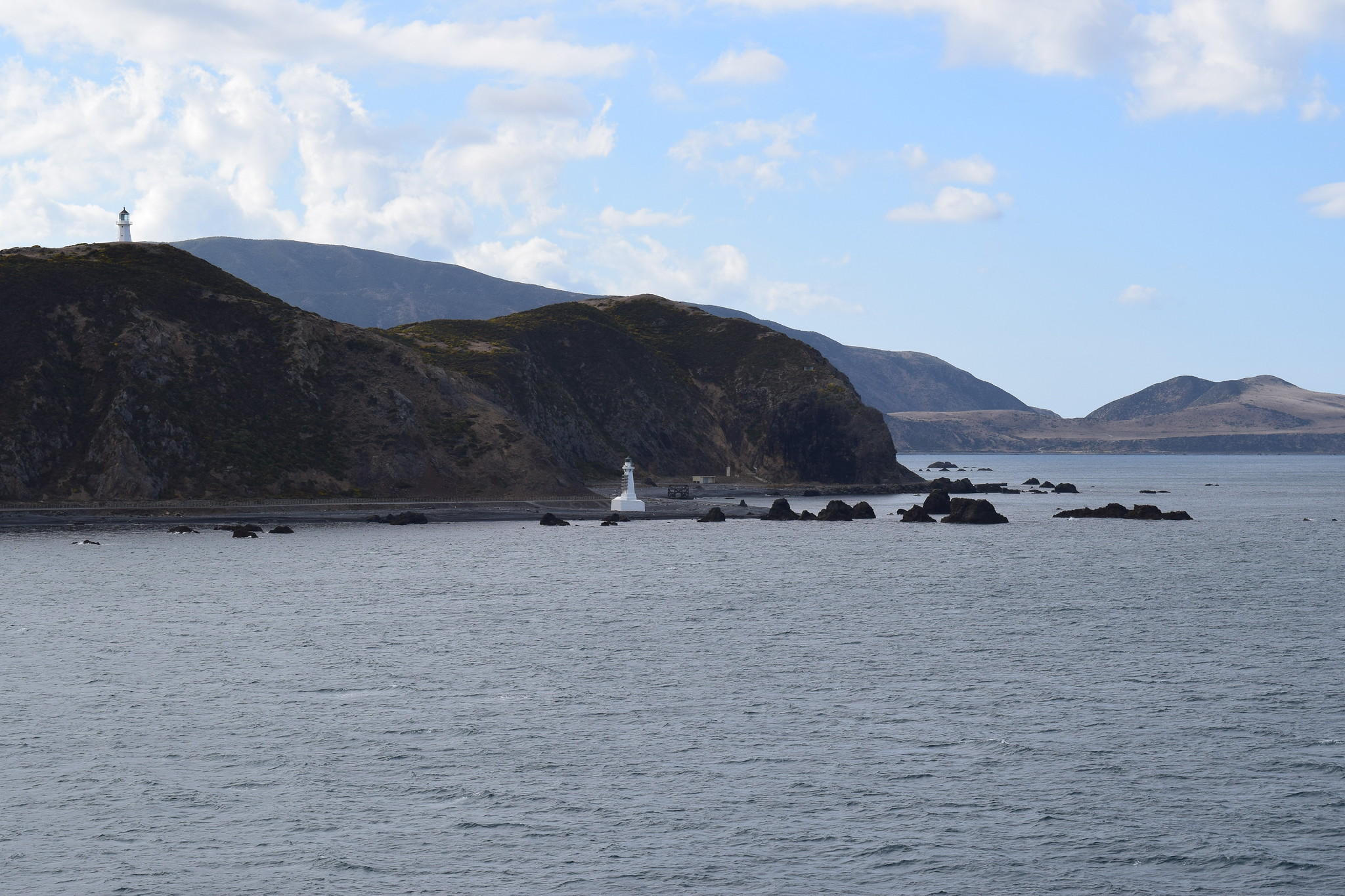 There are not one but two lighthouses on this cape! 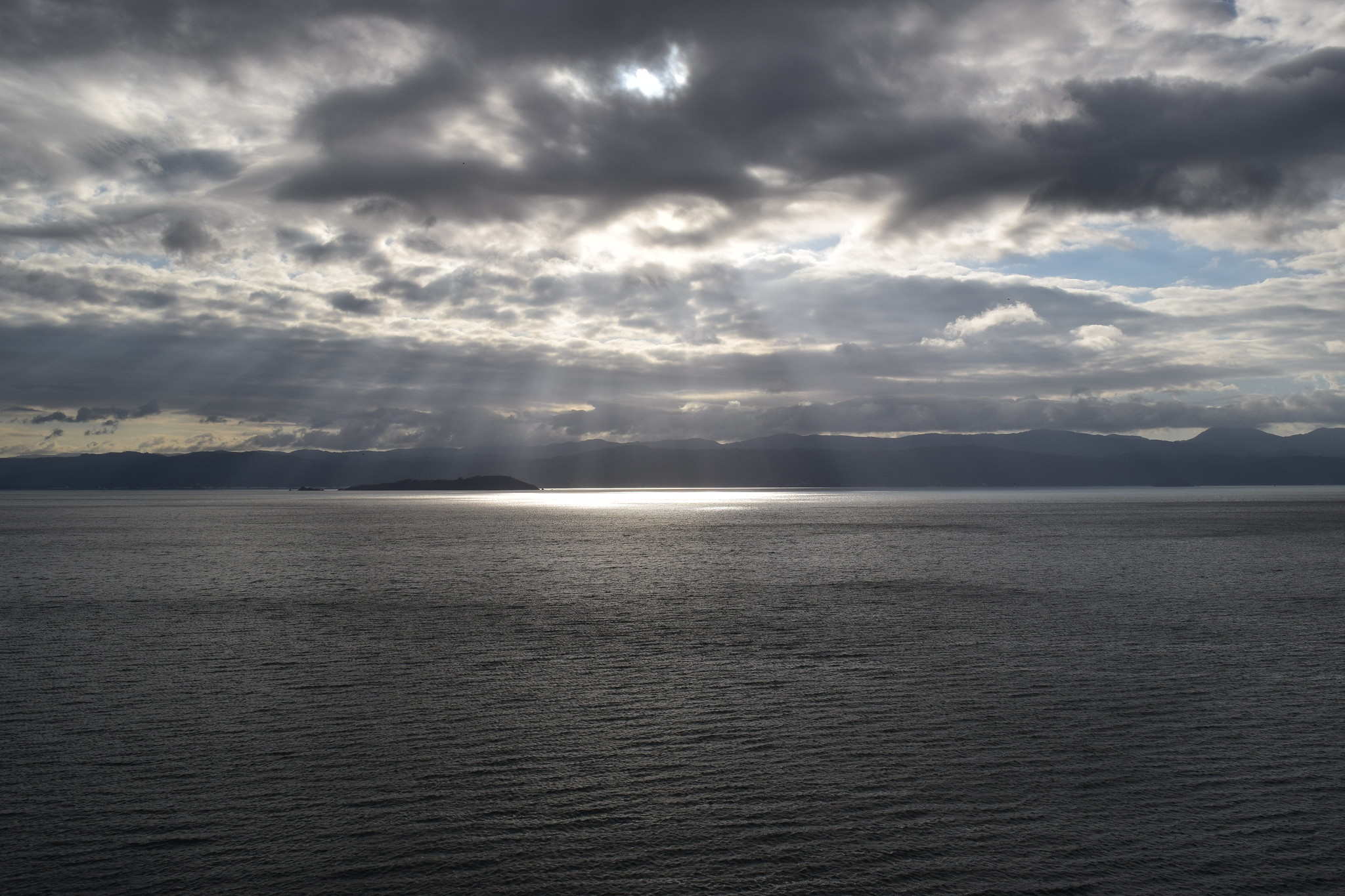 I feel like there must be a holy relic down there under the water :) 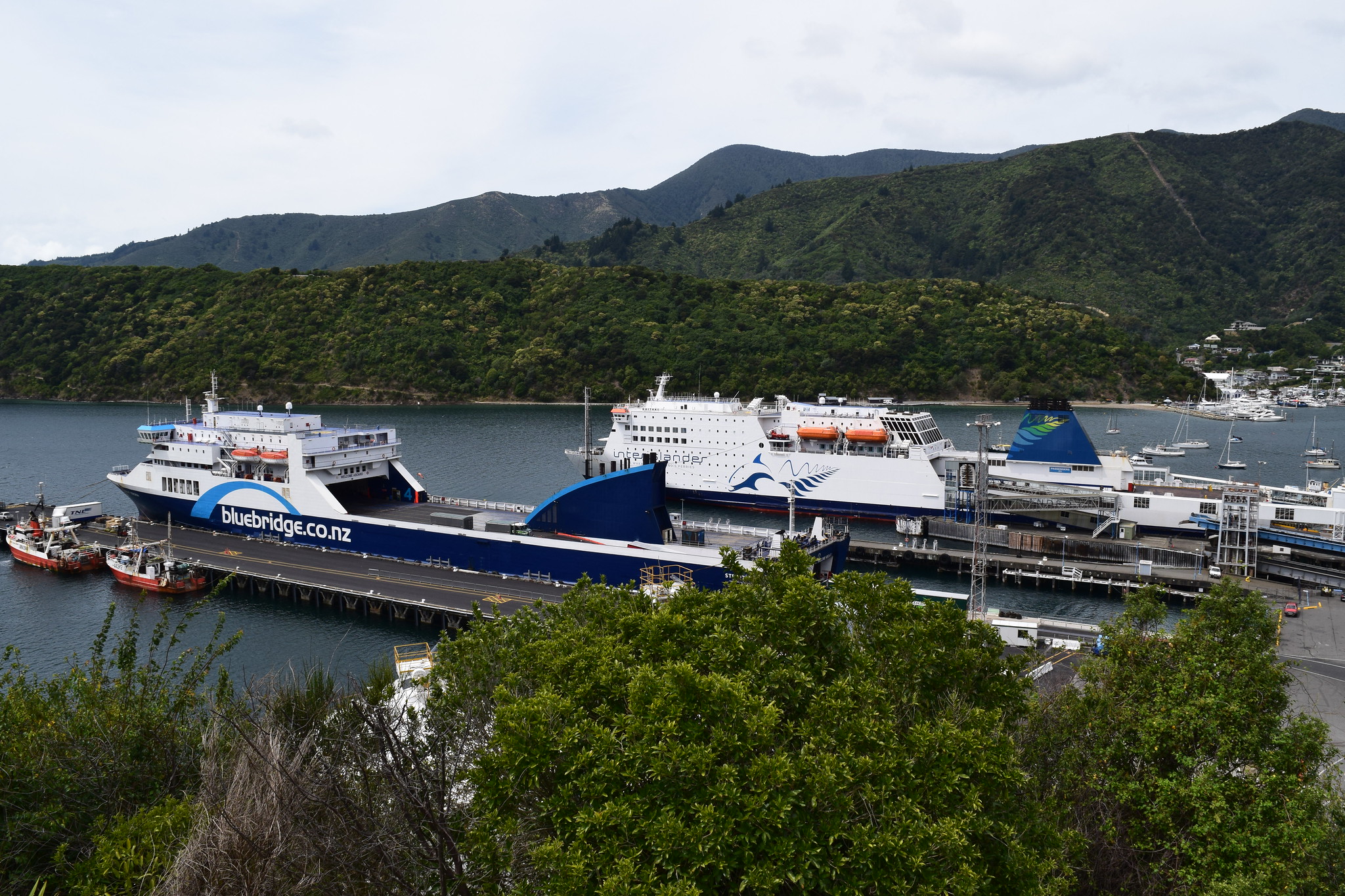 After just three hours, we dock in Picton and exit. I grabbed a car and started my journey along the South Island! 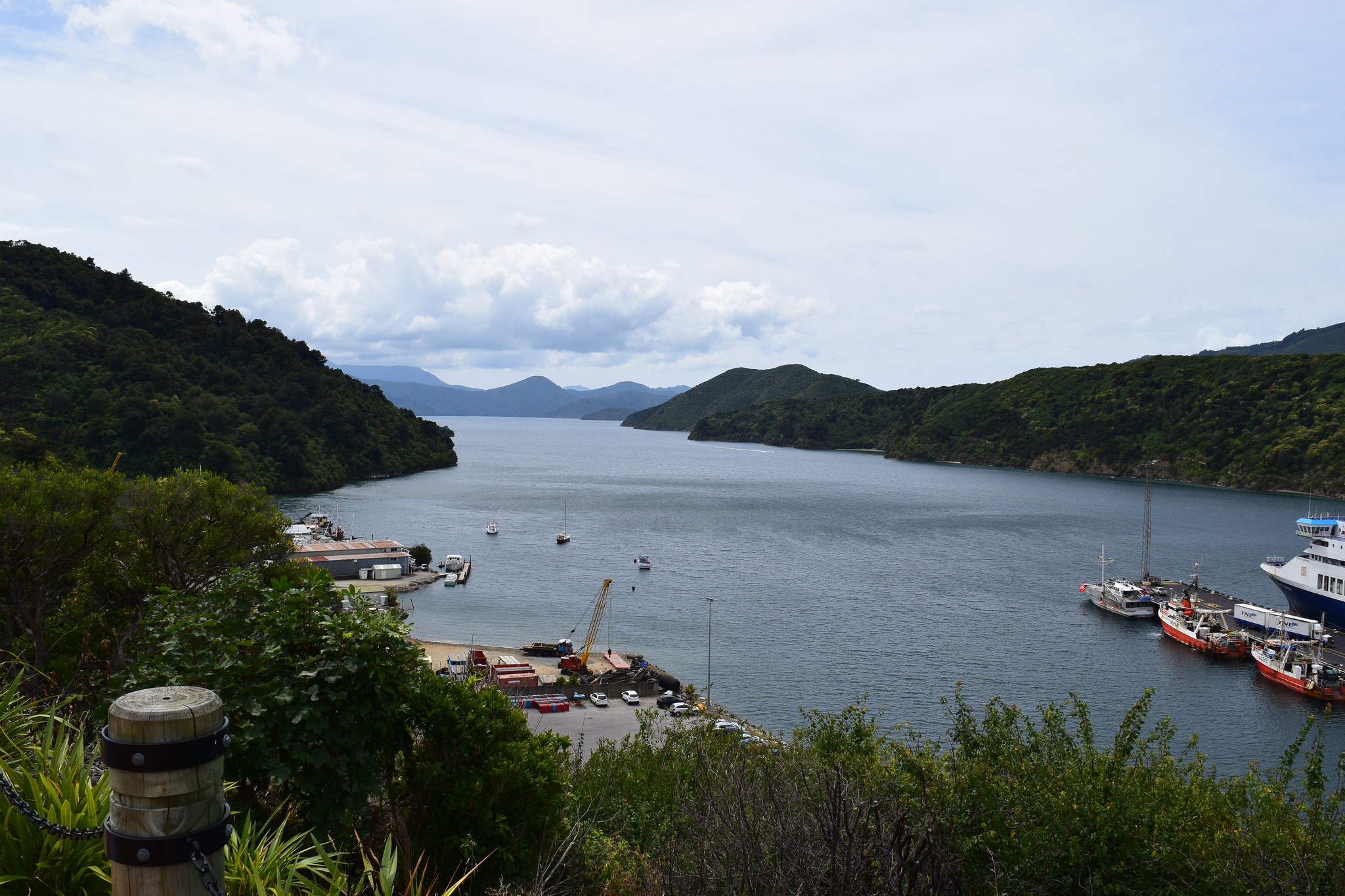 First impressions were good. Even the small harbor here at Picton looks amazing! 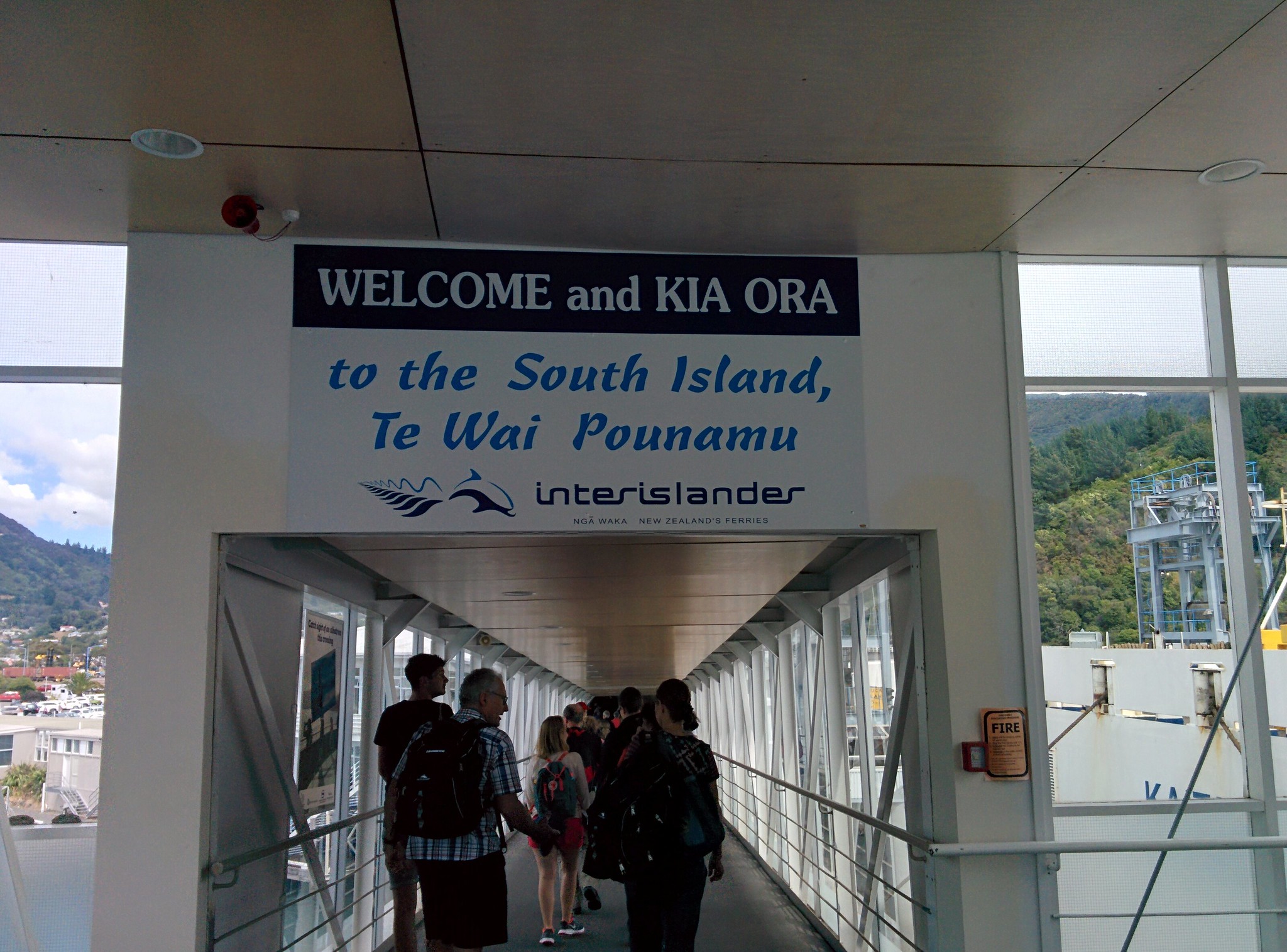 So here we go! Starting next post, we’re going to be exploring the South Island! My plan was to zigzag across, crossing the width of the island twice as I descend from top to bottom. I’m looking forward to sharing this journey with you!

One thought on “South Island, Pt. 0: Clap if you believe in ferries”