When I first started writing here, I wasn’t sure how long I’d be able to keep it up. I really created this blog so that when friends back home asked me how things were going and what I was doing, I could just point them here. Turns out that most of my friends back home can’t be bothered to read long-form photoblogs, but I enjoy doing it anyway.

To celebrate 100 posts, I’m going to pull out some firsts from this blog. 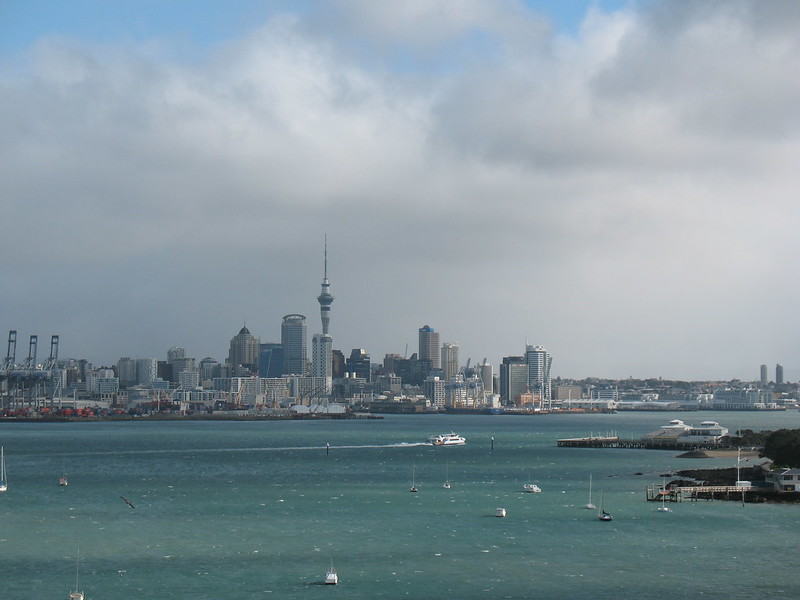 It shouldn’t surprise anyone that the very first photo posted on my blog is a photo of Auckland. It was taken with my old Canon Powershot point-and-shoot from North Head in Devonport.

This was not, however, the first photo I took after moving here. That would be this photo here, which I posted in my second entry, City Life: 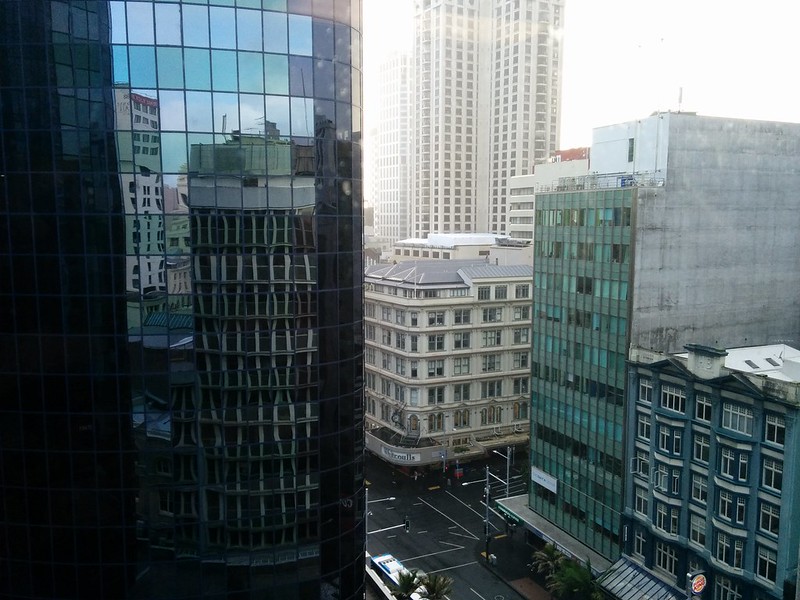 That’s the view from the IEP / Work NZ offices where I spent my first days in New Zealand as I was looking for an apartment.

But while we’re on the topic of first photos, this one is quite dear to my heart: 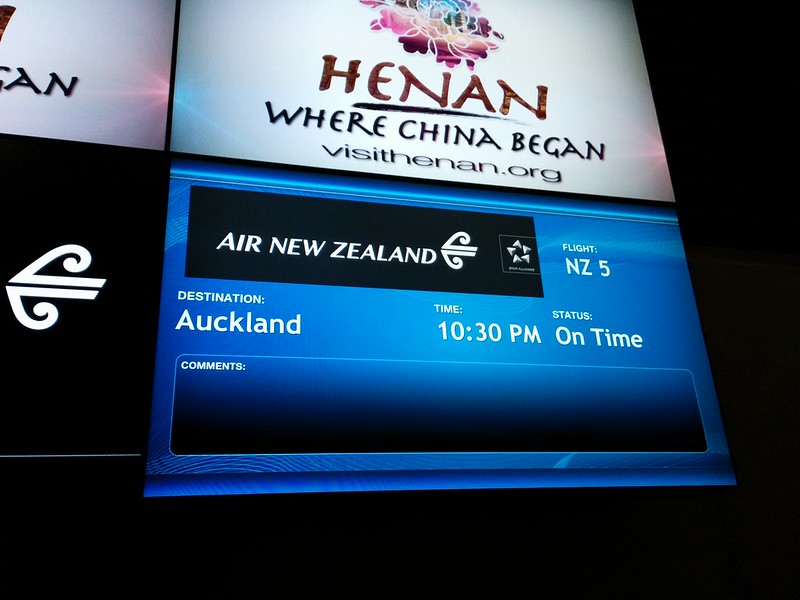 I took this photo in the departure lounge of the Los Angeles airport and entitled it “going on an adventure”. I am a grown man, but standing there with my duffel bag full of my worldly possessions looking at that sign, I felt like a kid again.

(While we’re on the subject of firsts, my first “adventure”, Devonport, is all of 370 words and 7 pictures. Mercer Bay is 650 words and 17 pictures. Jury’s still out on whether that’s an improvement or a detriment!) 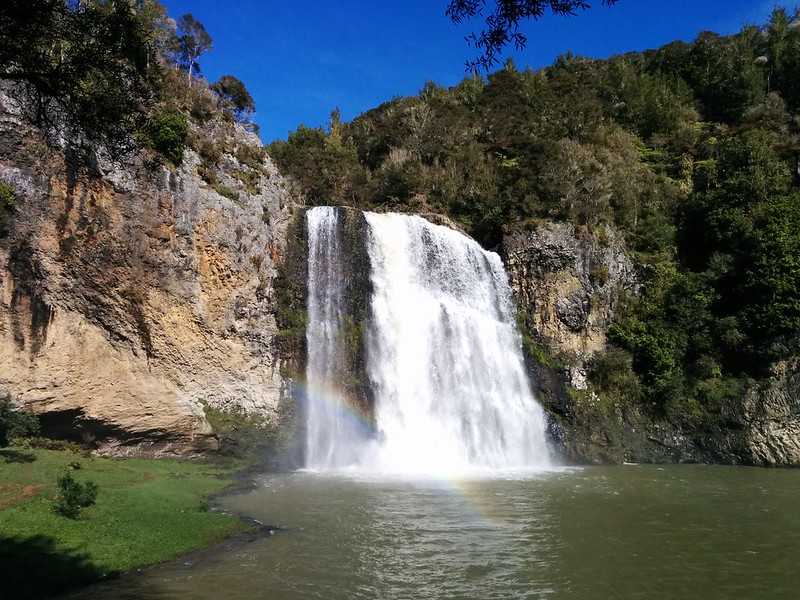 Just look at that shot of Hunua Falls. If I slapped that on a postcard people would think I had just Photoshopped that rainbow in there. I took this photo August 10, 2015, and I’m not sure to this day that I’ve taken a better photo of a waterfall. In addition to Hunua, I’ve been to Piroa Falls, Whangarei Falls, Nikau Falls, Kitekite Falls, Mokoroa Falls, Taranaki Falls, Whisky Falls, Wainui Falls, Huia Falls, Karekare Falls, and of course Milford Sound, home of more waterfalls than the rest of these combined. There are even more falls that I’ll write about in some upcoming posts. But Hunua Falls still have a special place in my heart. 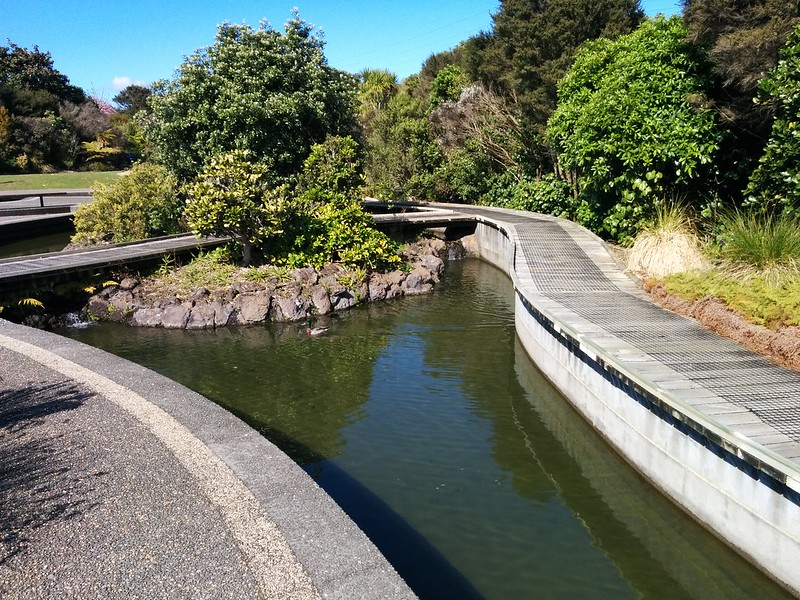 My tagging is, it must be confessed, not the greatest. But the first use of the birds tag is the Botanic Gardens, featuring this shot of a lone duck.

Ducks are, indisputably, birds. But they’re kind of…boring. In this Australia post I got a photo of a bush stone-curlew, which is possibly my first proper bird shot (and is also the first time I told the story about my youthful dream of being a bird photographer).

This shot I took at Pukawa is the first properly good bird photo I’ve ever taken. Annoyingly, this bird has resisted my attempts at identifying it, which probably means it’s either super common or it came over from Australia (New Zealand ornithologists are sometimes reluctant to acknowledge that Australian birds exist or that anyone would care about them). 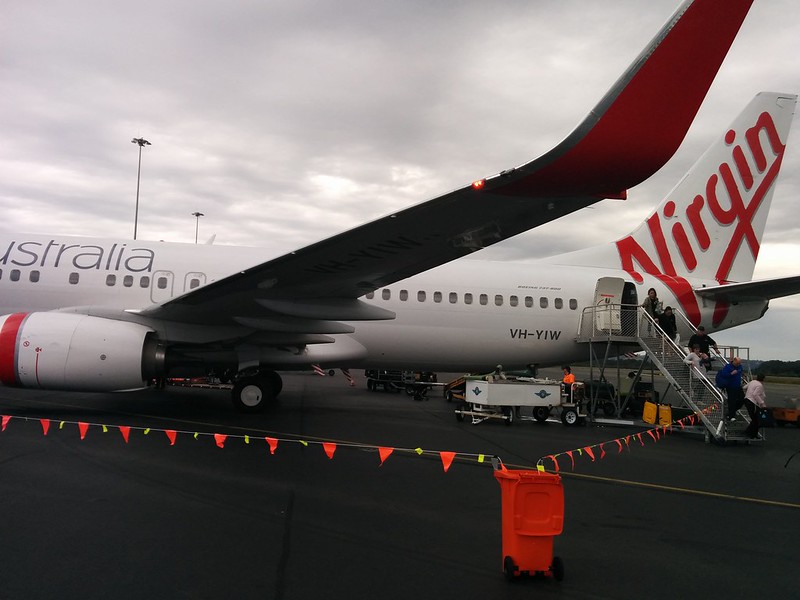 My first multi-day trip would in fact be my trip out to the West Island for the Gold Coast conference. But that’s kind of boring.

One could, of course, also argue that my three day trip to Wellington and back in 2014 would be my first real trip. But since that whole vacation was really a long trip, I don’t really count that. 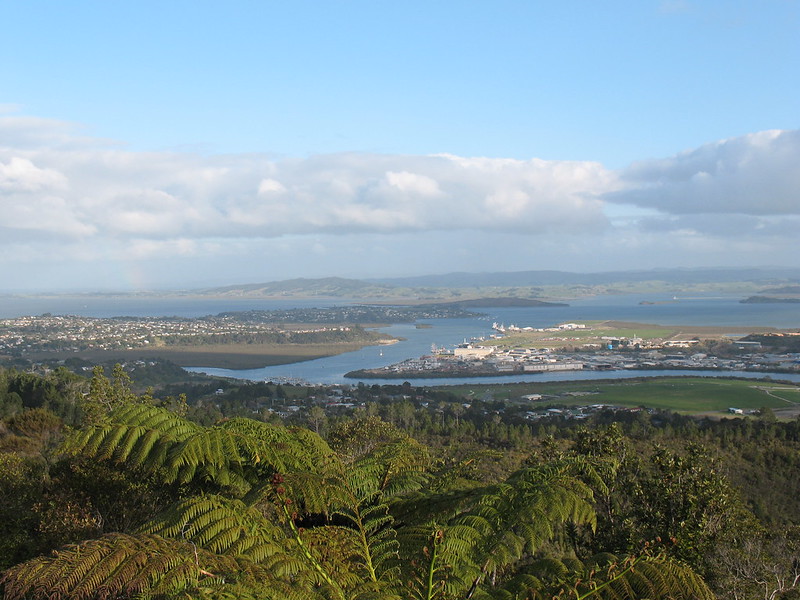 The trip that stands out in my mind as being special is my journey up to Whangarei. I guess that’s because it’s the first overnight trip I planned myself. I did have great fun up there!

Since that two-day trip, I have gone camping at Pakiri Beach, stayed in a lake house with several friends, and of course took a two-week-long jaunt out to the South Island. Upcoming posts will cover another amazing overnight trip and also a second trip to Australia. 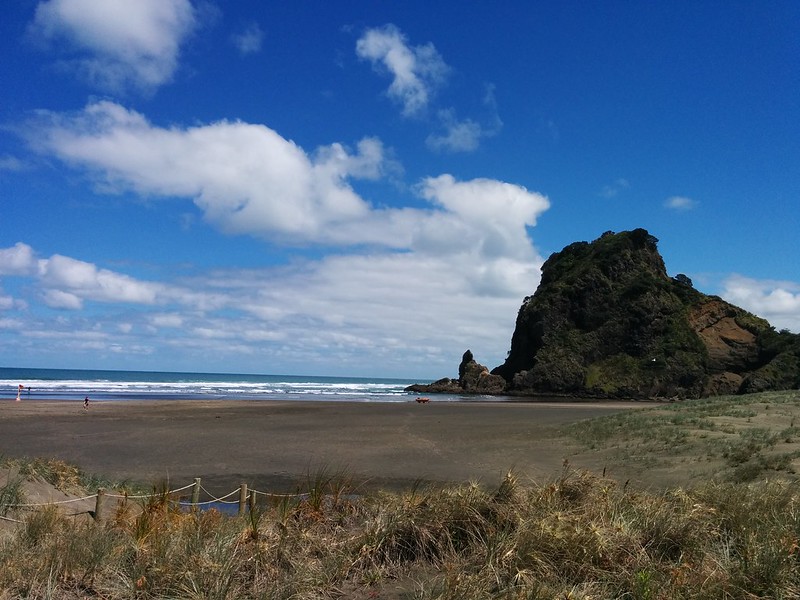 This one’s kind of tricky. The first Western beach I visited would actually be Piha, which Brendon took me to in 2014 when I first came to New Zealand to visit (yes, this photo is from that trip, and was taken December 3, 2014).

Because of this trip, Piha retains a special place in my heart even though it (along with Muriwai) is probably the most touristy of the Western beaches. 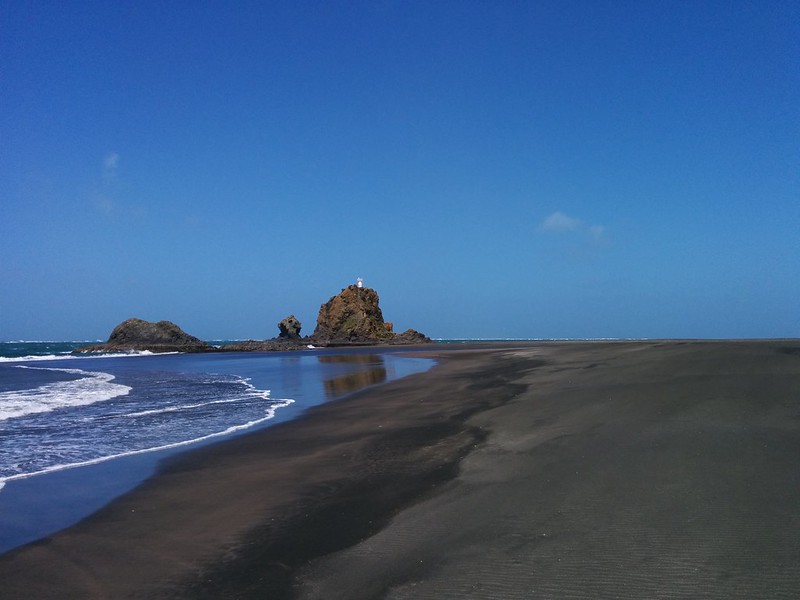 The first Western beach I went to upon my return to NZ in 2015 would be Whatipu. That photo reminds me that I need to go back to Whatipu and spend more time there, since I really enjoyed my trip but didn’t quite give it the treatment it deserved.

New Zealand is, of course, an island (or rather, two large islands and several smaller ones). But “first island in the Hauraki Gulf” is a bit of a mouthful. 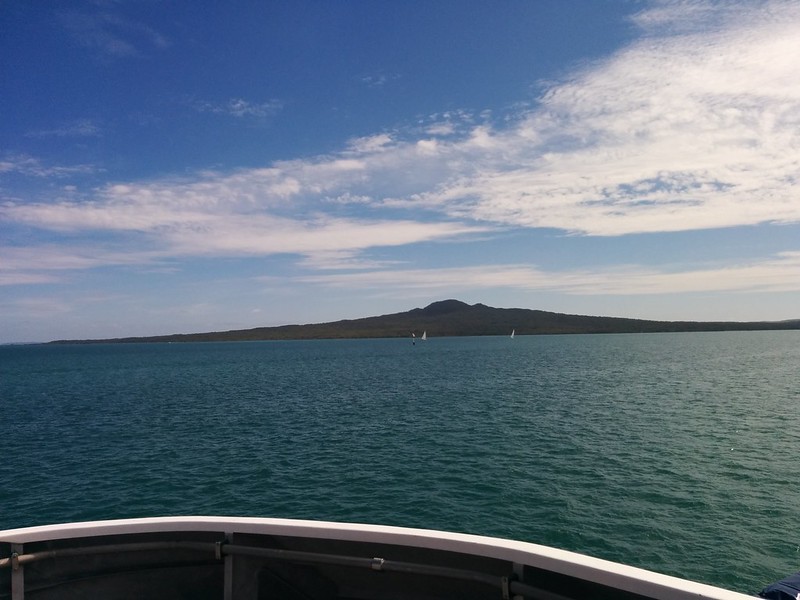 Another tricky one, for the same reason. This photo, taken November 27, 2014 shows that the first time I took the ferry into the gulf was to visit Rangitoto. 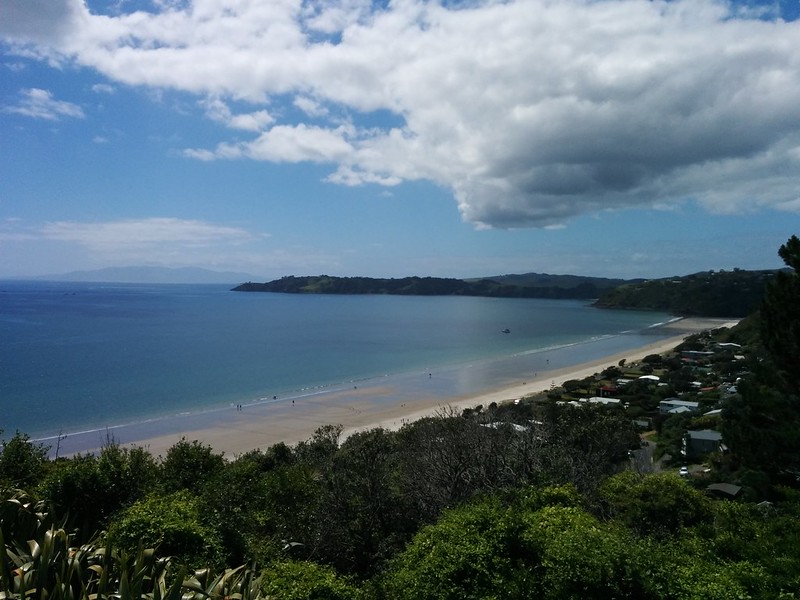 Upon my return, though, my first ferry trip was to Waiheke to go cycling.

Those of you who may recall my original plan will remember that I moved to New Zealand for a year. 100 posts at two posts a week equals nearly a year, though three posts a week for the South Island trip did accelerate things a bit. But through serendipity rather than planning, this post is going up very near the anniversary of my moving here: June 28th. So not only am I celebrating 100 posts to this blog, I’m also celebrating one year of living in New Zealand!

To all of you reading, whether you’re a regular follower (thanks, mom!) or checking this out for the first time, I’m glad you stopped by. As I write this I have no idea where life will take me. But don’t worry. I’m just getting started!