St. Heliers Bay is an upscale neighborhood adjacent to Mission Bay on an area that I’m going to call the Tamaki Peninsula because I don’t think anyone has bothered to name it. 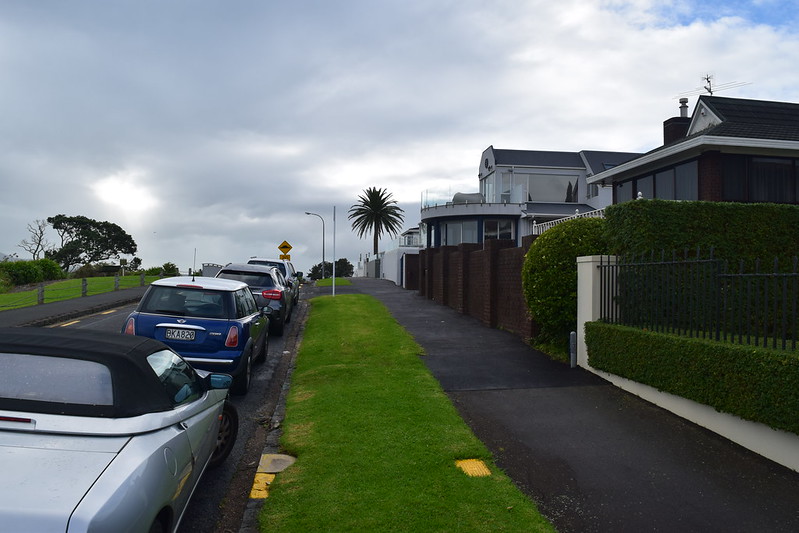 I parked my car on Cliff Rd. in front of some fancy houses and basically just walked until I got bored. 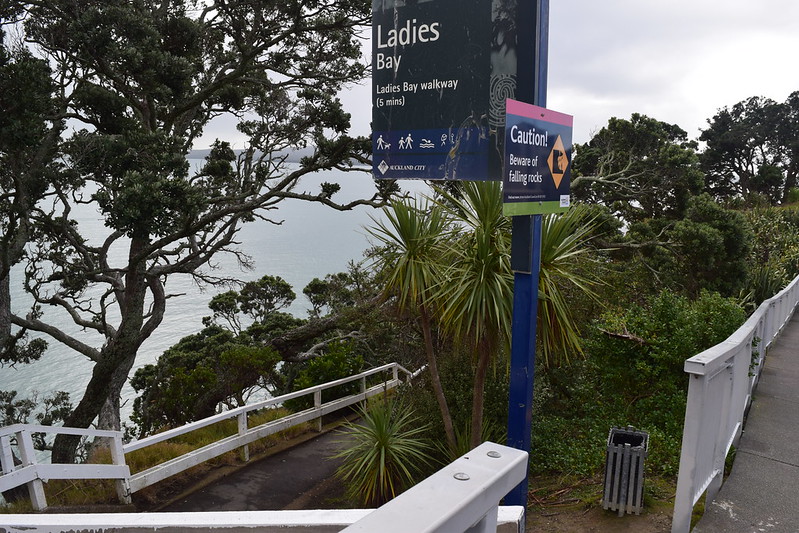 My first stop was the evocatively named Ladies Bay (there’s also a Gentlemans Bay, which is a bit harder to find and which I passed up on). 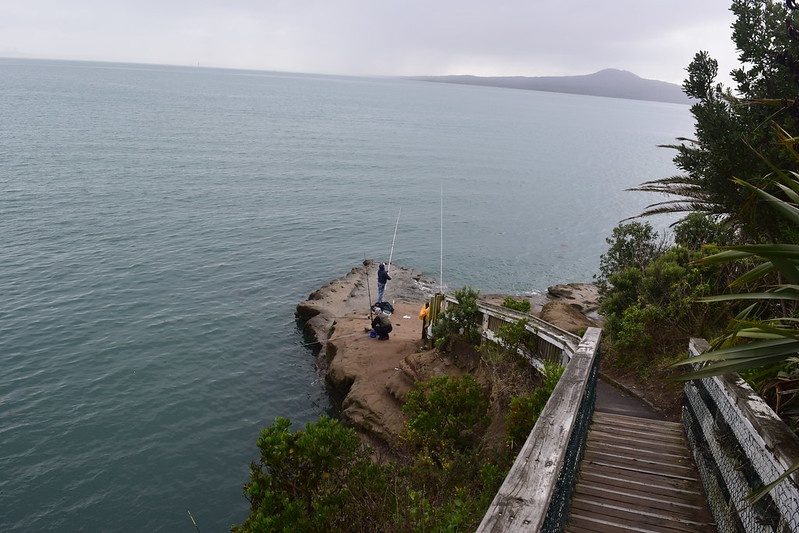 The weather was, as you can see, borderline unpleasant, and the steep walkway was a bit slippery. Making it down to the bottom, though, I found not ladies but fishermen. 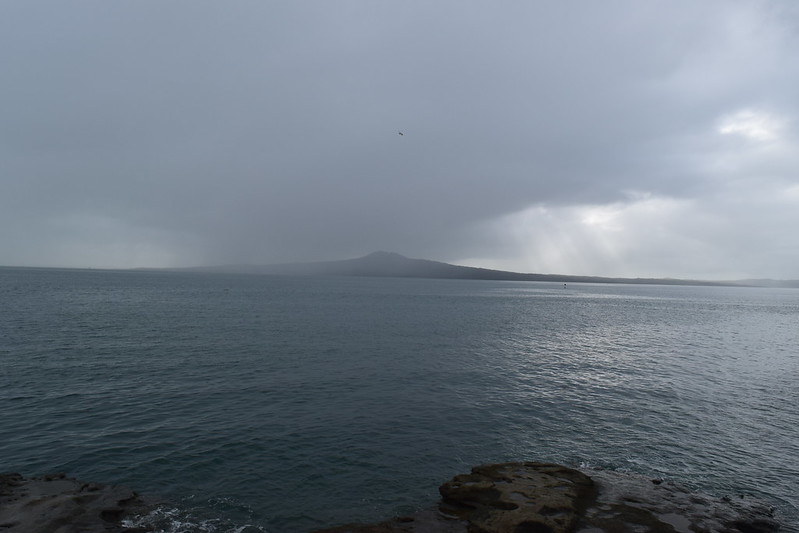 Poor Rangitoto was getting poured on, but I ignored the droplets and pressed on. 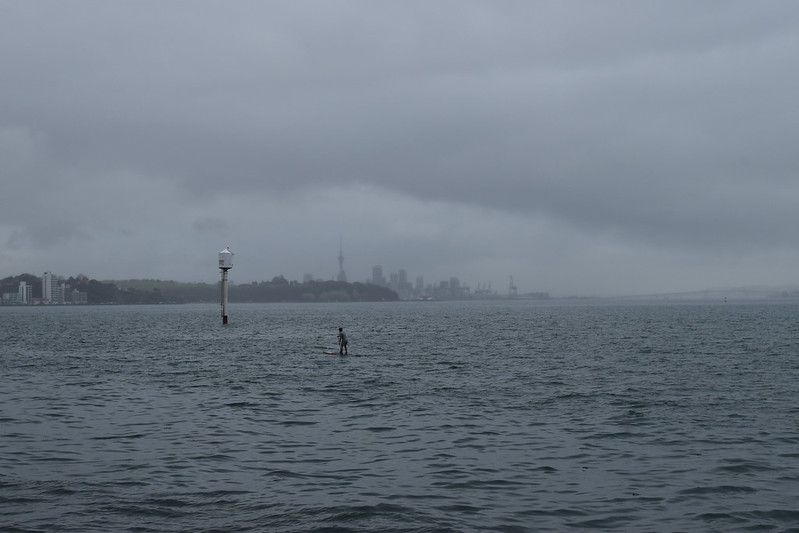 This paddleboarder did not apparently care about the indifferent weather. You can see Auckland City and the Harbour Bridge in the background of this shot. 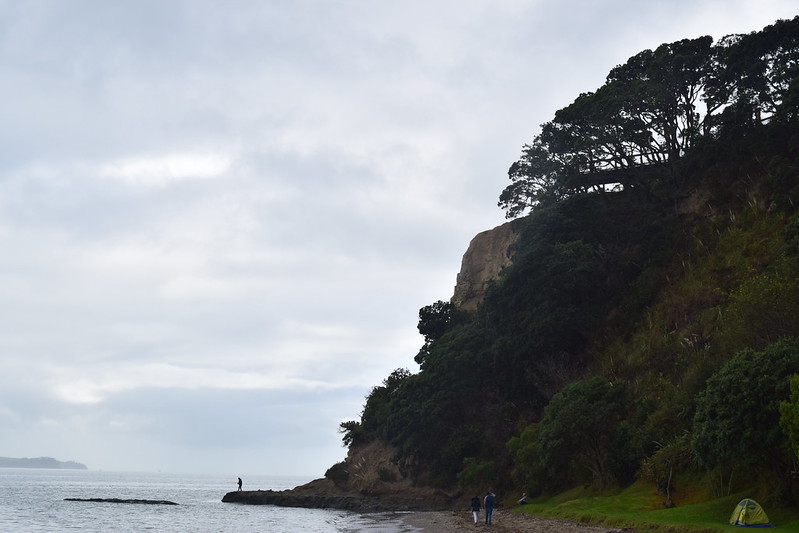 That bit there to the East is Achilles Point, of which we shall see more anon. 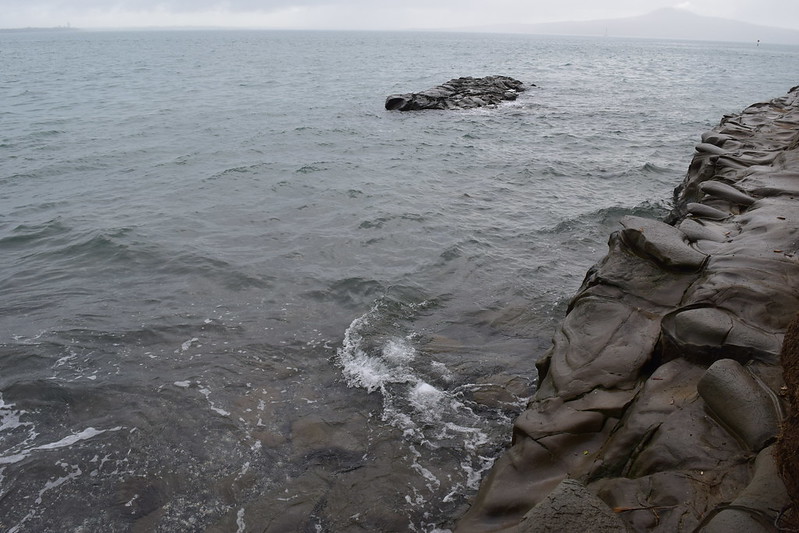 As I made my way along the slippery rocks, I decided to not play games with the tide and head on back up to the road. 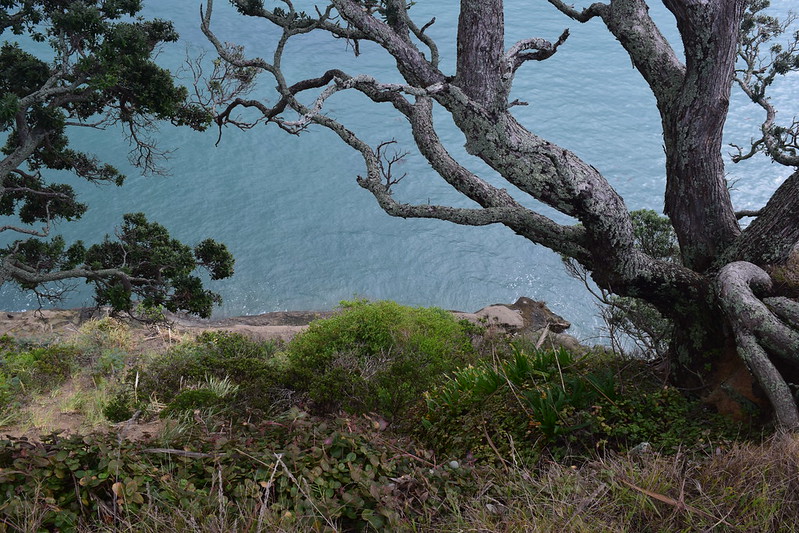 Once back up, I appreciated the view off the cliff. 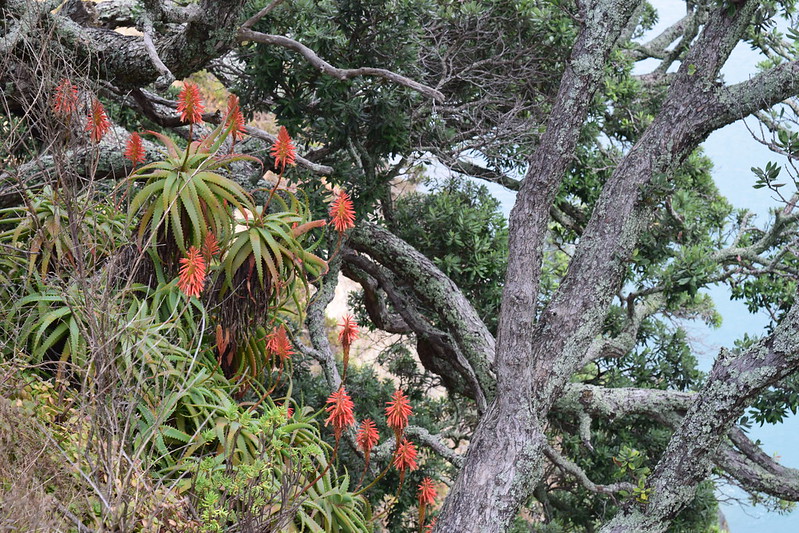 I also stopped to admire these torch lilies, which are quite prevalent along the coast here.

(These flowers, also called red-hot pokers, are native to South Africa. I first encountered them in 2013 in Cape Town when I was exploring Kirstenbosch National Botanical Garden.) 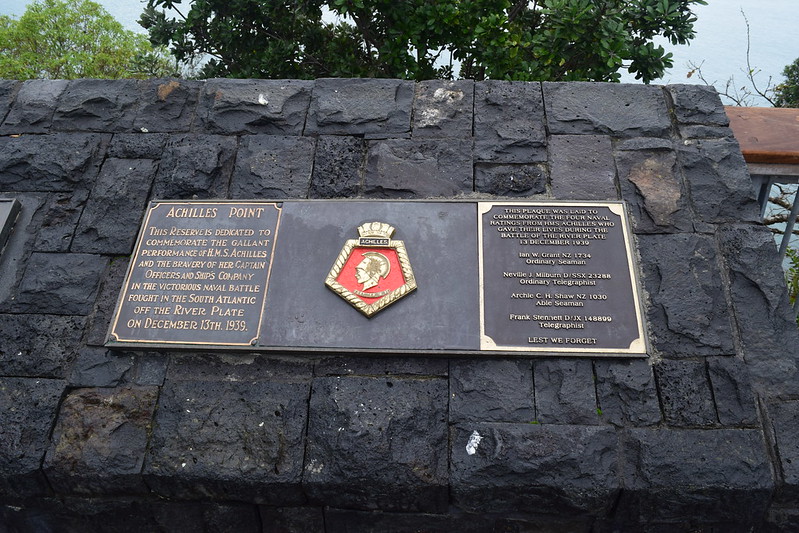 Moving along, I then proceeded to Achilles Point.

Achilles point, as the placard suggests, is named after the HMS Achilles: a light cruiser loaned to the New Zealand navy by the British in the 1930s. The Achilles participated in the Battle of the River Plate, the first naval battle of World War II, in which the German pocket battleship Admiral Graf Spee was defeated, hounded, and ultimately sunk. The whole story makes for fascinating reading if you are so inclined. The Achilles survived the war, was later sold to India, and eventually was scrapped. May all implements of war suffer the same fate. 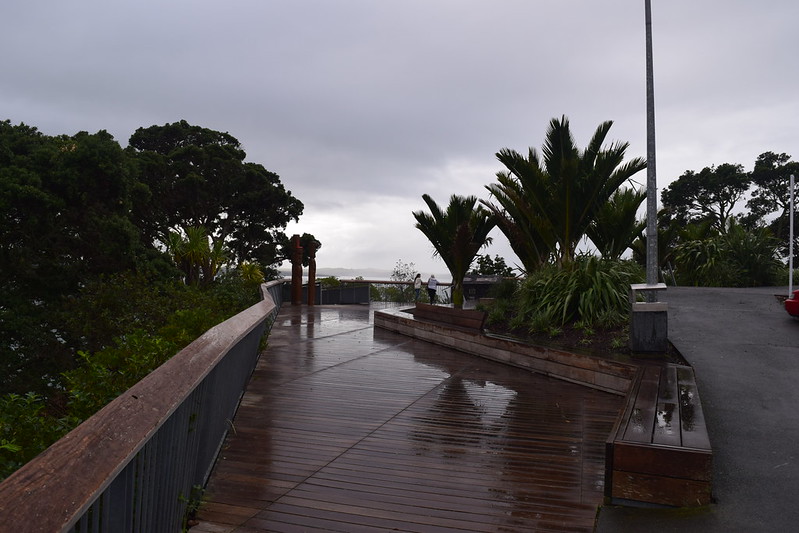 Achilles Point itself is a great lookout spot. 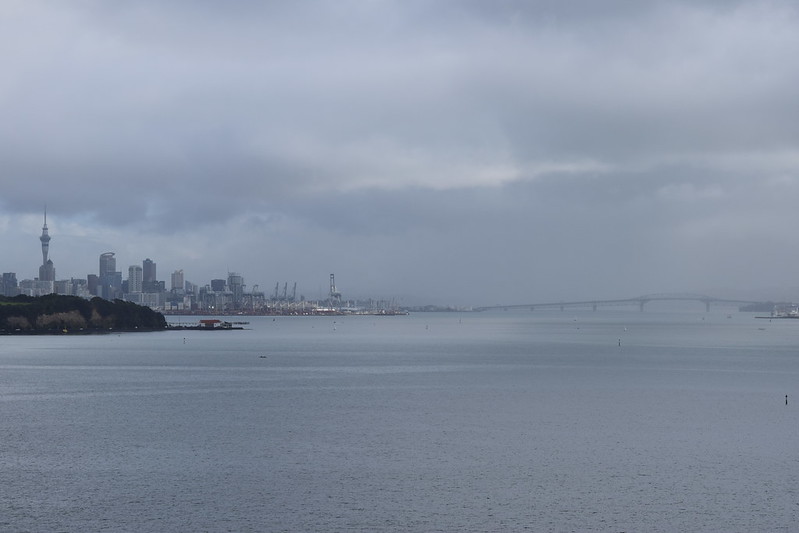 Another picture of foggy Auckland and the Harbour Bridge. 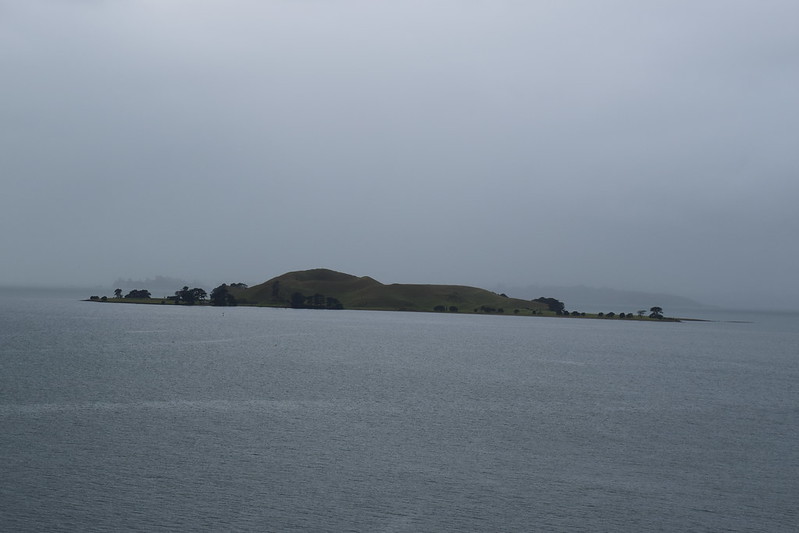 Brown’s Island, with Waiheke nearly occluded by fog in the background. 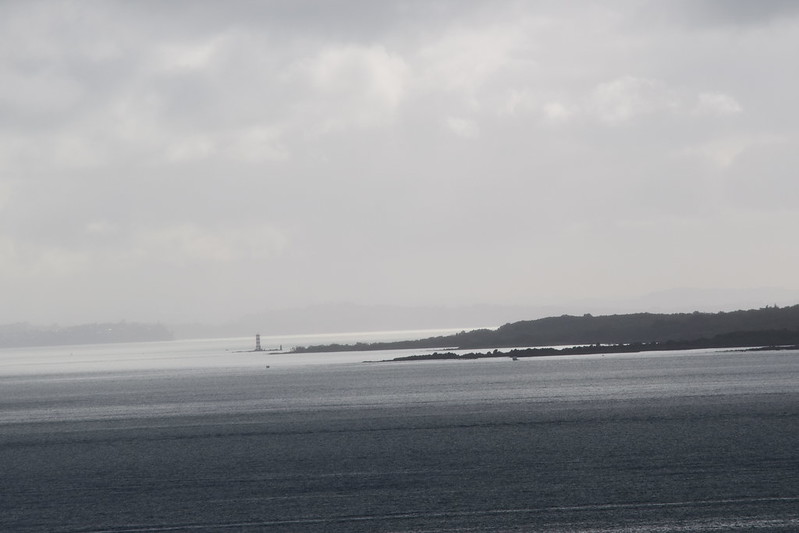 This is a cool shot, if just for how the water looks and the tiny little warning marker. 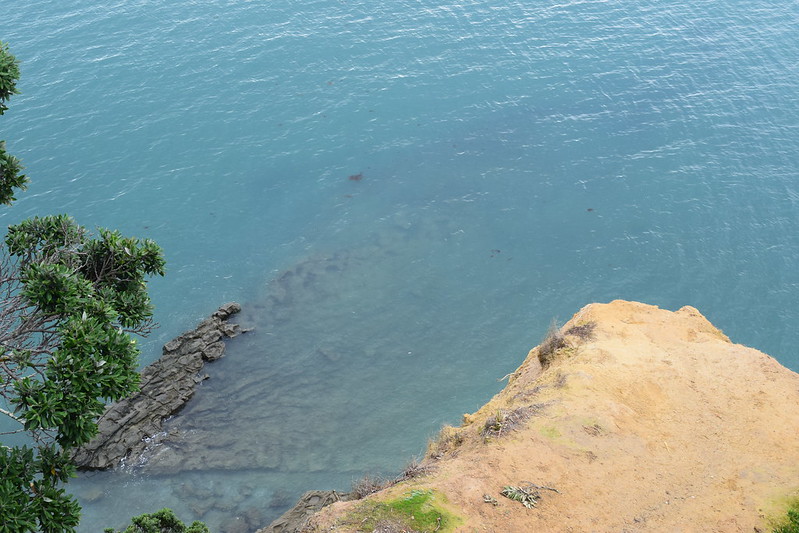 The shot down into the water shows that even on such an overcast day, the lovely blues of the bay are still there. 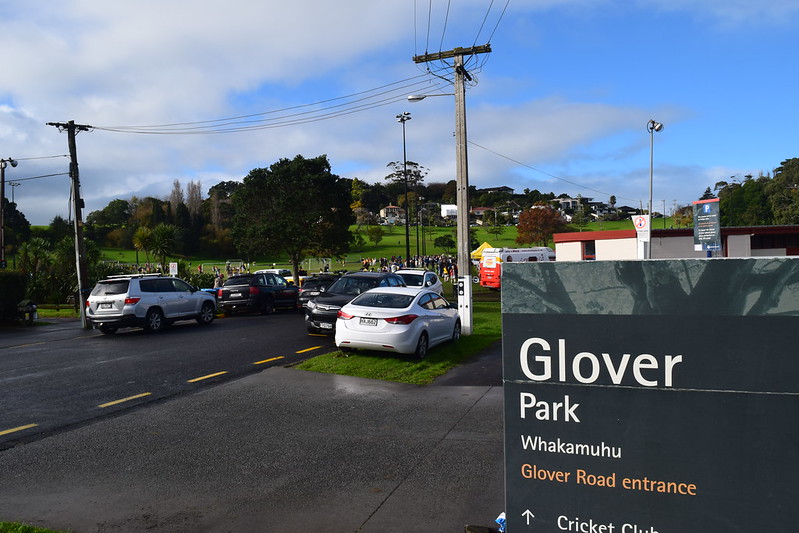 Speaking of lovely blues, by the time I had walked to Glover Park, the sky started showing some blue as well! 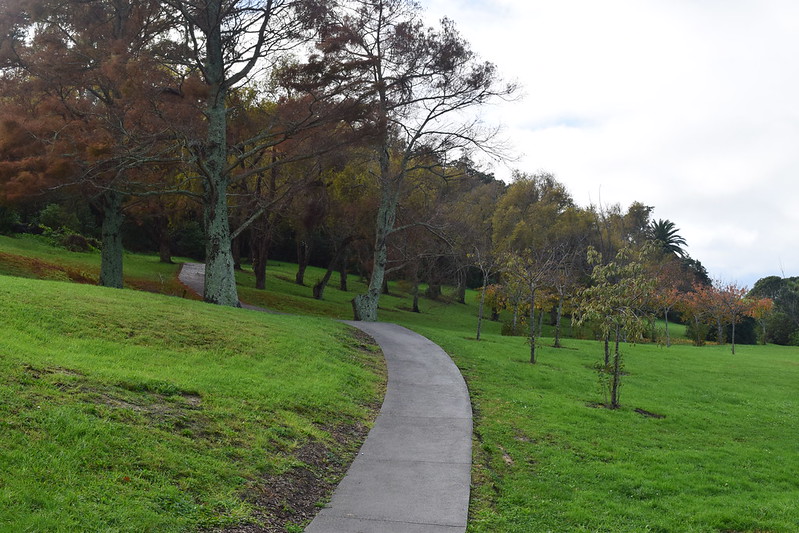 Glover Park is a neat little area. It’s mostly soccer fields, with some well-paved trails running up to the North. 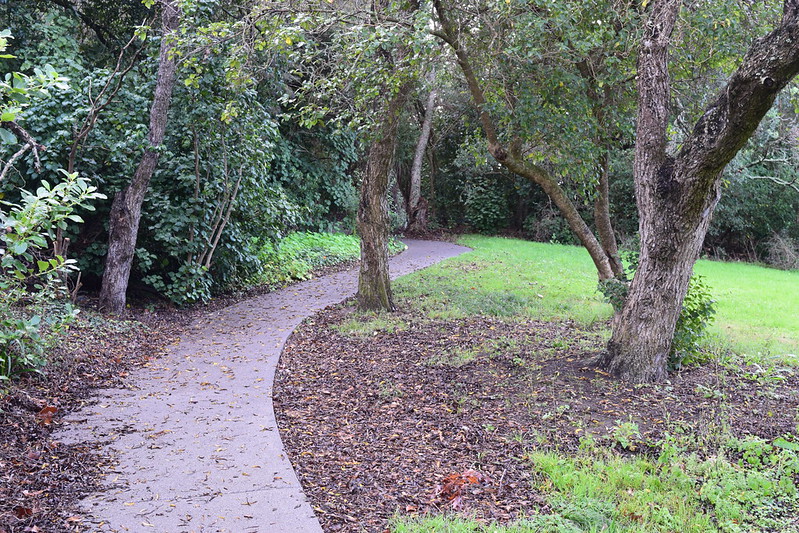 These trails run through some nice deciduous trees. The climate here is so warm that even in Winter it really feels like Autumn. 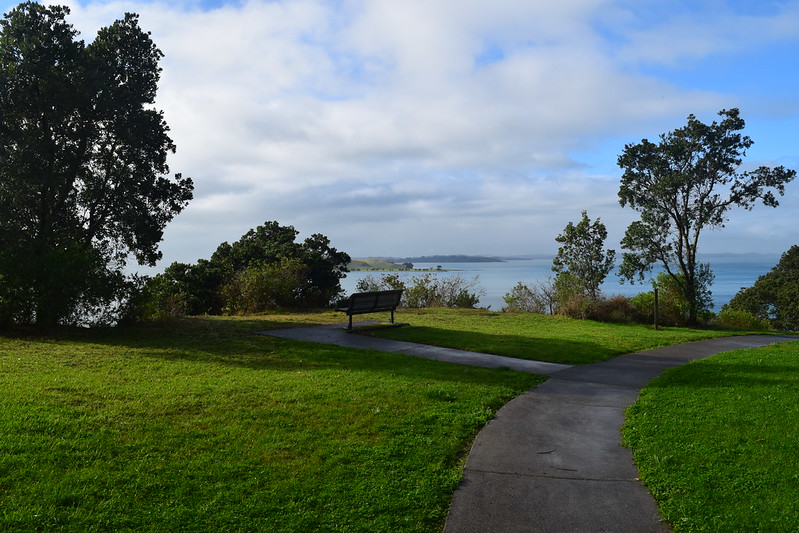 At the crest of the hill, there’s a nice view of the bay. 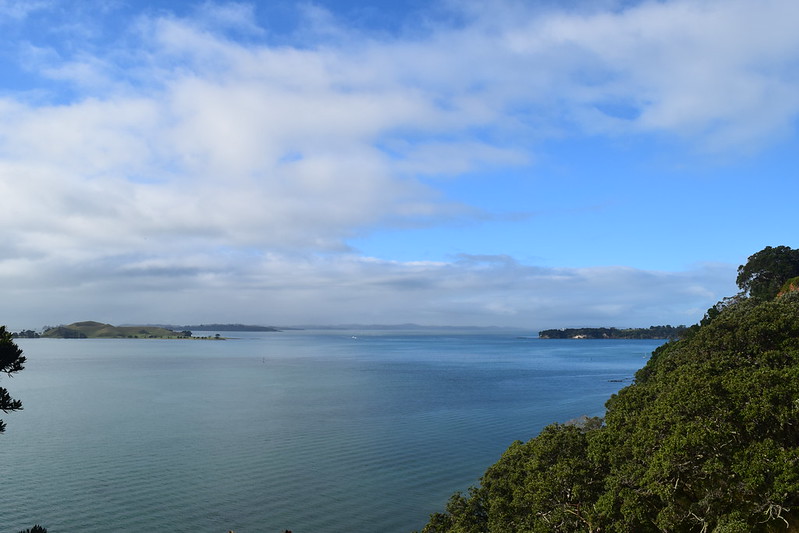 Looking out (and again marveling at the nice weather compared to earlier, we can see Musick Point and Brown’s Island. If you Zoom and Enhance considerably, you can even make out the communications center on top of Musick Point. So cool!

The bit of land in between would be West Tamaki Head. I should note that almost all these names (including St. Heliers itself) are recorded in the Gazetteer as unofficial. Not overly surprising given the casual attitude New Zealanders seem to take toward naming geographic features. 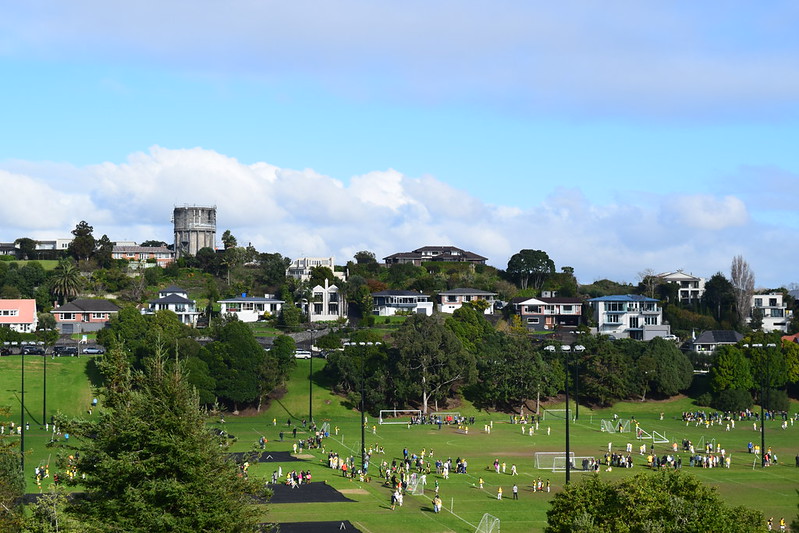 Looking back over the park, we can see a soccer game in progress. Note the military-bunkereque water tower there in the background. I spent a good 15 minutes walking all around the block trying to find a way to get to the tower without walking through private property, with no success.

(Side note: I think these being soccer and not rugby fields is a hallmark of St. Heliers being an affluent area. I’m not sure if it’s just that rich people are more reluctant to pound the stuffing out of each other, if soccer is just more popular among the more worldly and cosmopolitan elite, or perhaps if I’m reading entirely too much into it.) 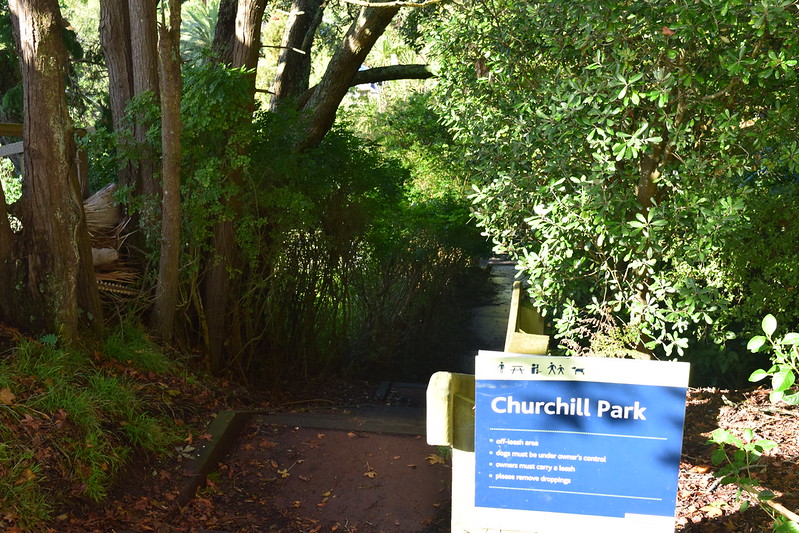 A short walk from Glover Park, we come to the much larger Churchill Park.

I don’t know if I was tired or if I’m just that bad with directions, but I kept getting hopelessly turned around in Churchill Park. I’m fairly certain I walked enough to cover the entire park but only explored about a quarter of it. 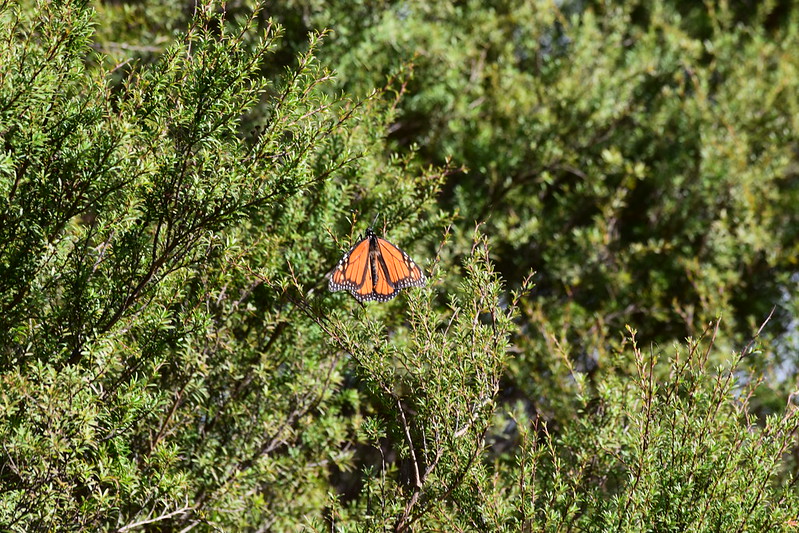 I spent some time birdwatching, but the only decent shot I got was of a butterfly. 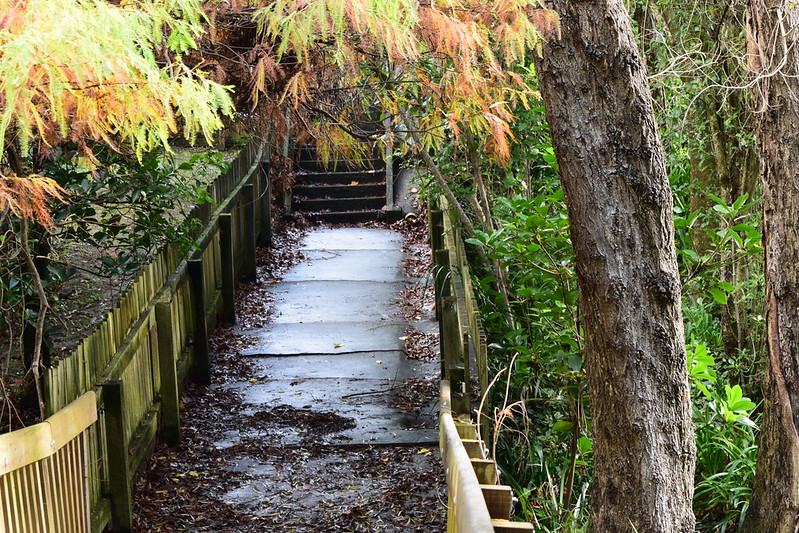 The park does have some nice trails and pathways winding through it. 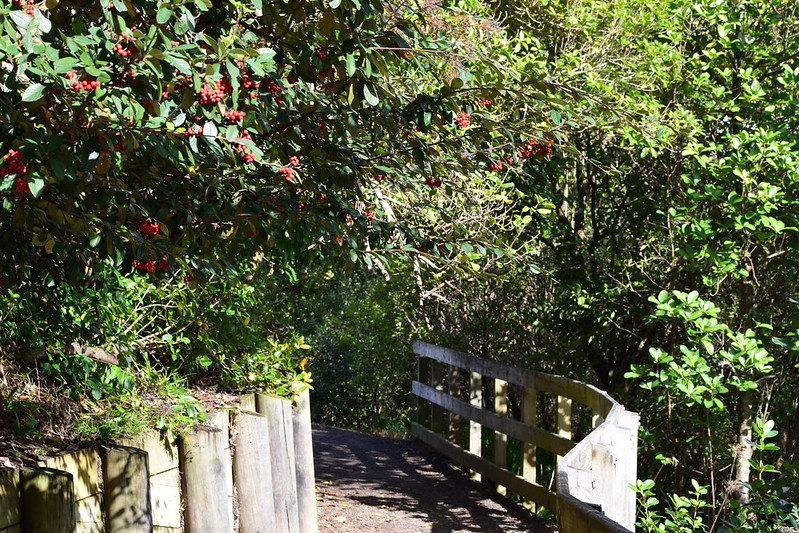 Not all the pathways are contiguous, which is part of the problem. Exploring the whole park would require either a map or a lot of patience (and a better internal compass than I have). 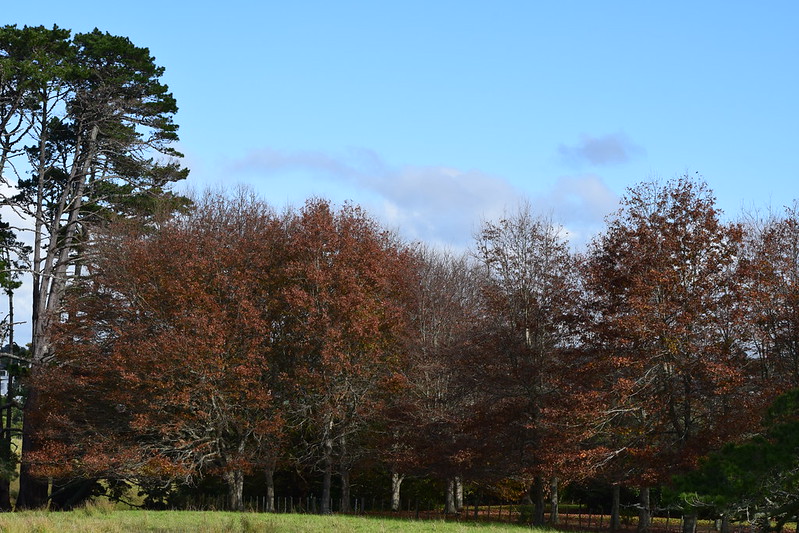 Got some nice Fall colors here in the middle of Winter :) 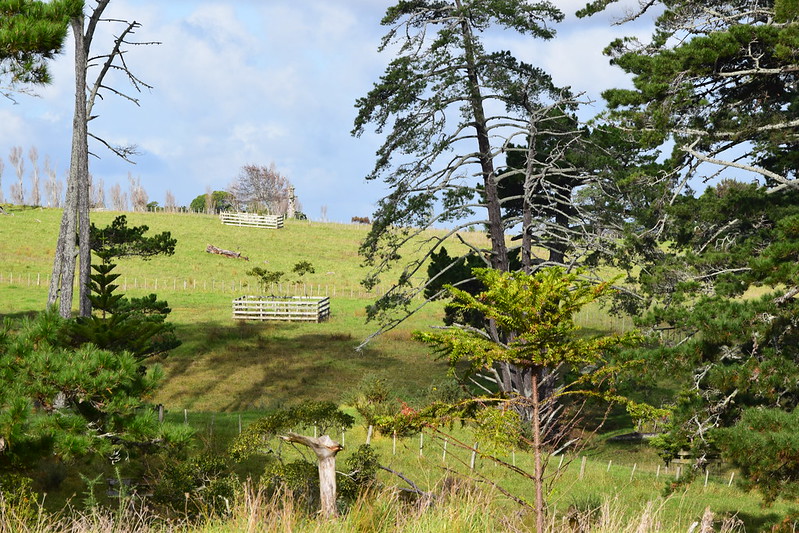 Very little in New Zealand is flat, and Churchill Park is not an exception. 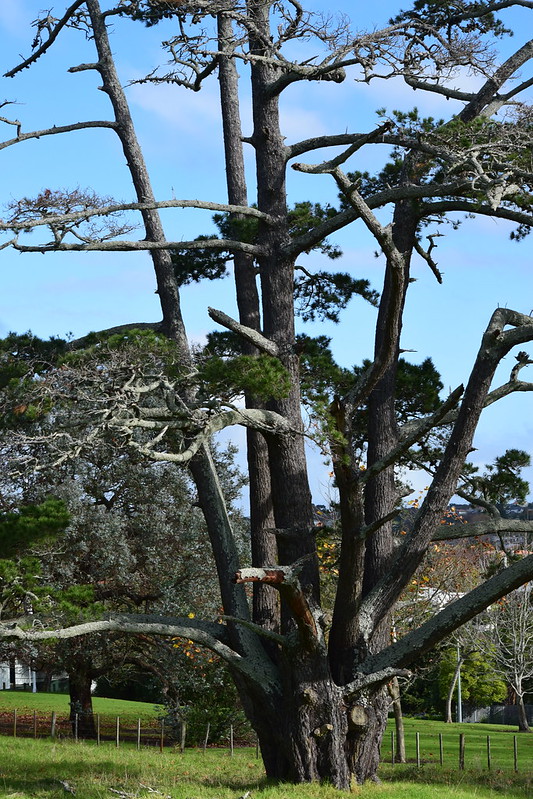 And, as we close out our time at Churchill Park, a cool tree. 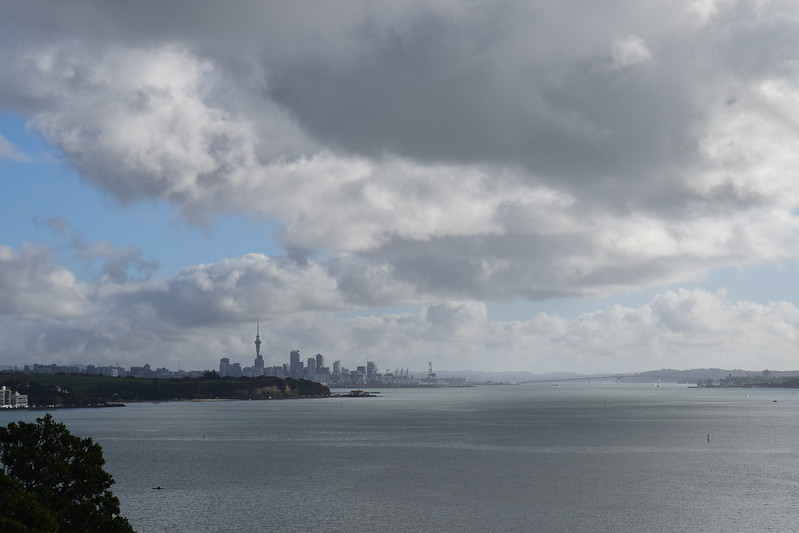 After walking back to Achilles Point, I had to take one last photo of Auckland, this time less mist-enshrouded.

So that’s St. Heliers! Hope you enjoyed exploring it as much as I did. Next time we’re going to explore yet another part of the extended Auckland area! Stay tuned :)