Hanging Rock State Park is in central North Carolina about two hours away from the Raleigh area. It was a nice Saturday and I was getting antsy cooped up inside. The time was right for a hike! I’ve been to Hanging Rock a number of times and done several of the trails there. This time we’ll be heading up to the overlook and then exploring a couple of the closer waterfalls. 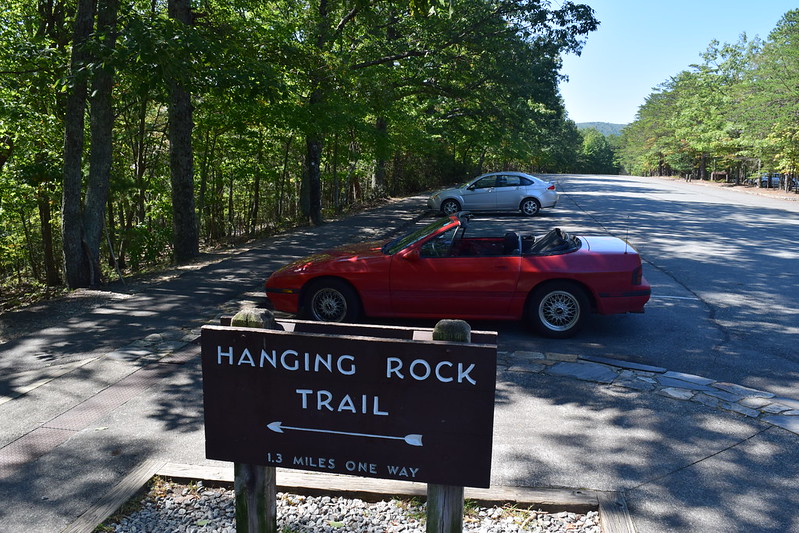 Regular readers are used to seeing a different convertible parked at my hiking spots :). Yes, this is my North Carolina sports car, and she did a great job making it all the way out to Hanging Rock and back! 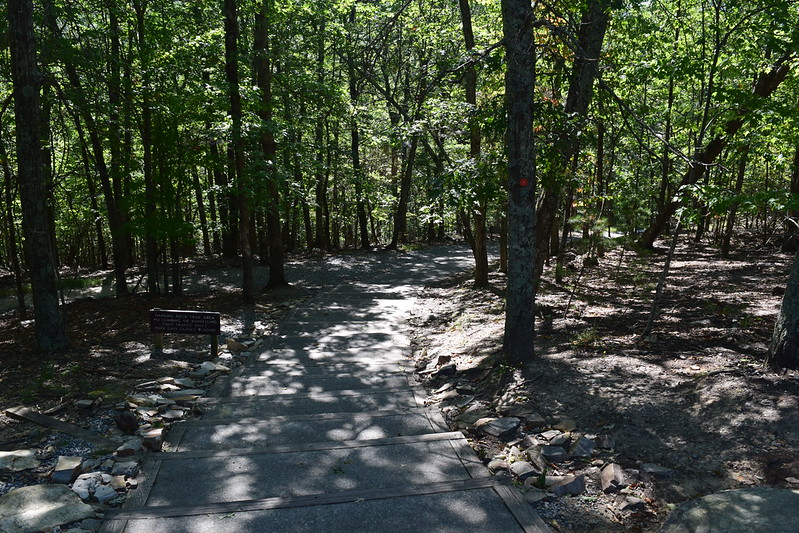 The overlook trail starts out extremely well paved! You will note that it’s very well marked with very helpful signage and visible blazes. When I complain about New Zealand trails being a little hard to figure out in places, you now know what I’m comparing them to! 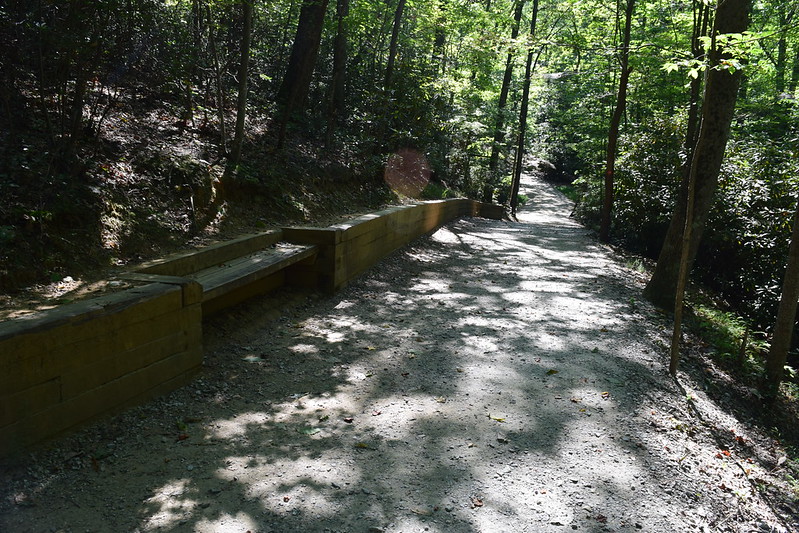 Even once the trail transitions to gravel, note that it’s very wide and also has erosion barriers and benches. This is definitely not your backcountry tramping track! 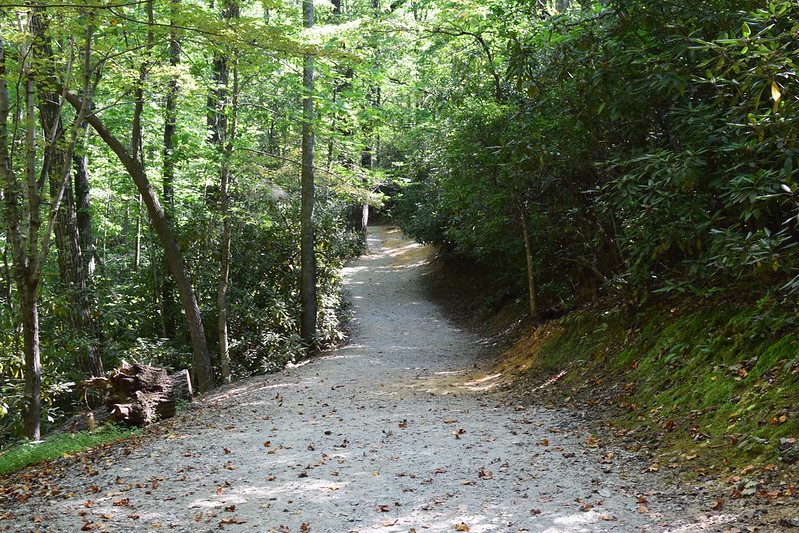 You might also note that the trail is going downhill somewhat from the carpark. This bodes ill, as it means the last bit of the return journey will be uphill. C’est la vie. 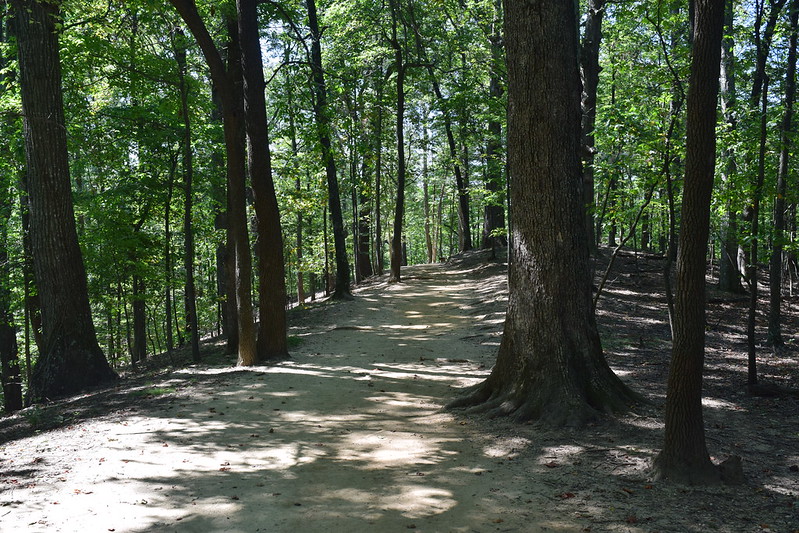 After the first major uphill bit of the trail, the gravel gives way to packed dirt. 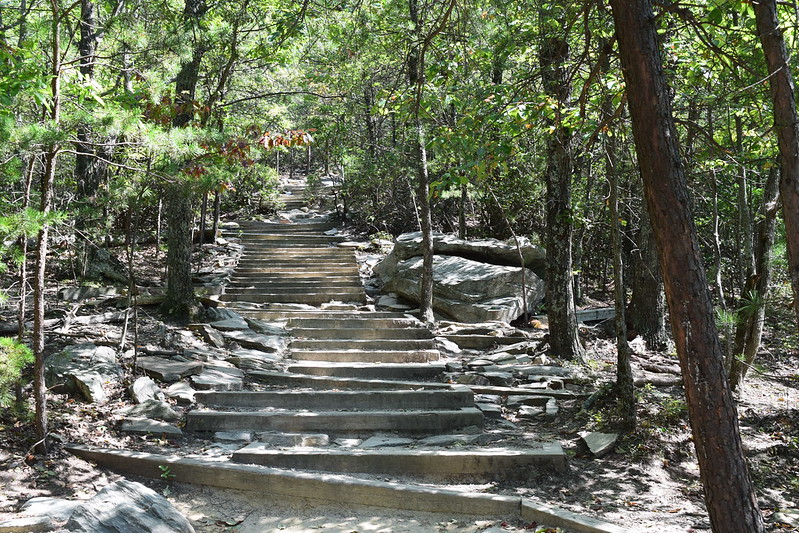 The packed dirt then gives way to this.

Once you reach these stairs, the good news is you’re already about halfway there. The bad news is that it looks more or less like this the rest of the way up. Even for a stair enthusiast such as myself it gets a bit old after a while! 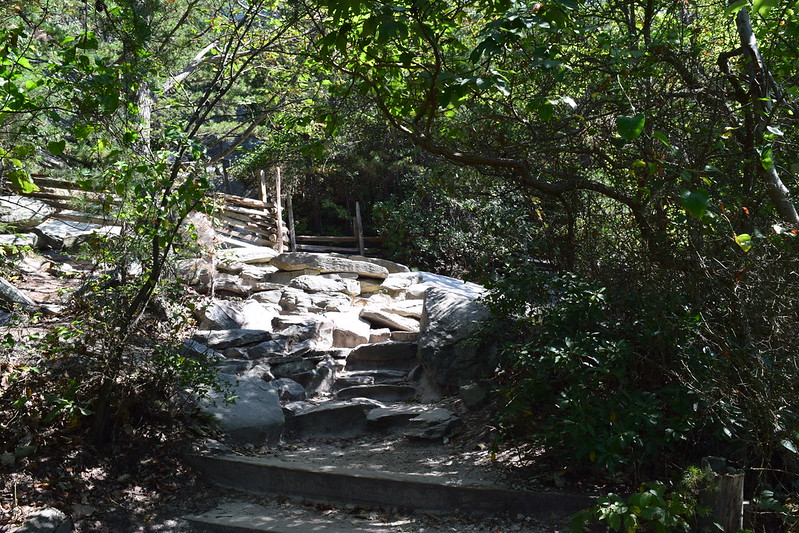 I did have to stop and admire some of the cooler bits of the trek up the stairs, though. I was also gratified that, while the hike was still quite an exertion, I was definitely doing better than any of the other times I’d tackled this hike. New Zealand walking paying off! 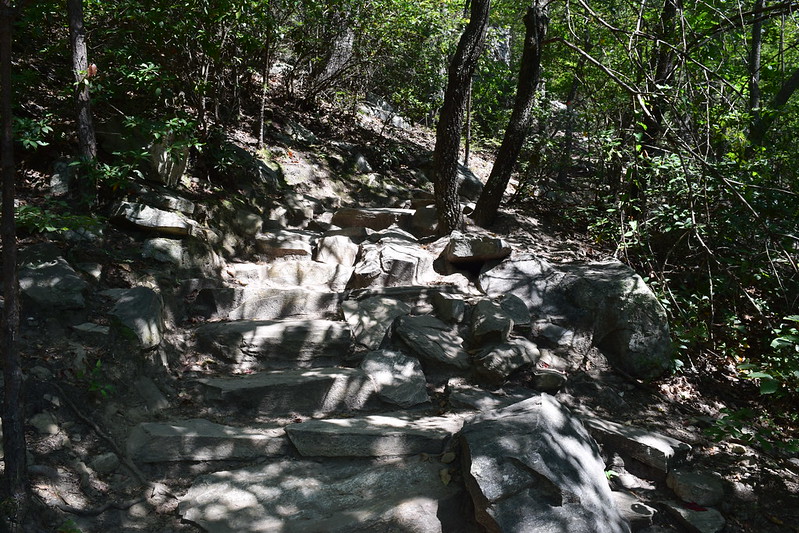 The trail winds itself up the side of the hill, sometimes getting a little steep and rough. Yes, even well-paved, well-marked, comfy trails like this one are still have their difficult bits! 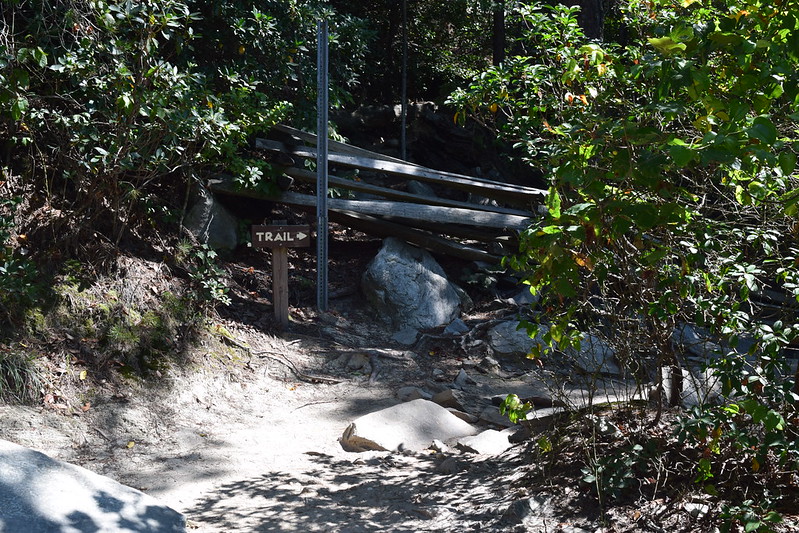 As someone who has in the past found it difficult sometimes to follow a trail if it zigs when I expect it to zag, I greatly appreciate the clear markings of the Hanging Rock Trail. I was left in no confusion about which way to go here, that’s for sure! 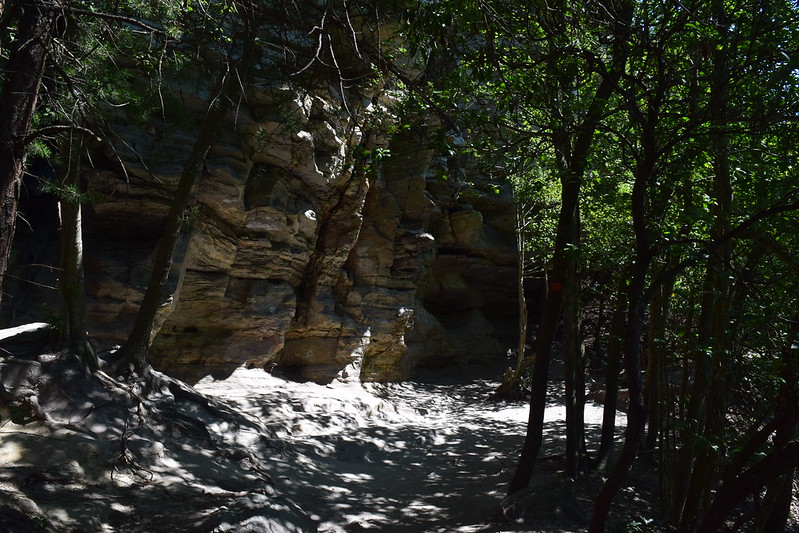 There are some very cool overhangs in this area, leading up, of course, to the Hanging Rock itself. 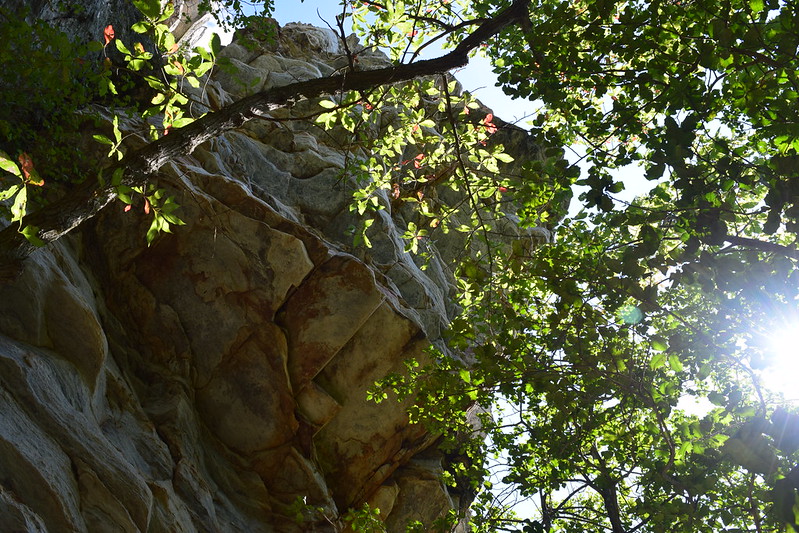 And here we are under the overlook! All we have to do is get up to the top of that rock. I left my jetpack in the car, though, so I guess I’ll have to take the long route. 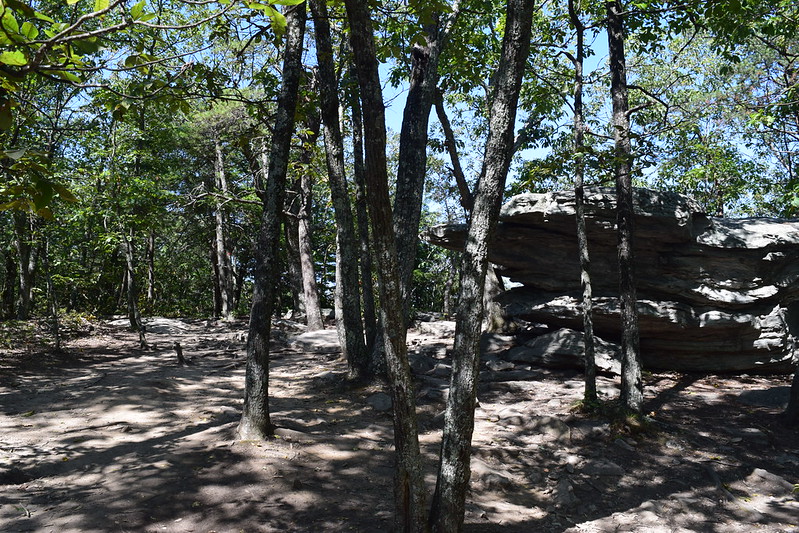 Once you see this, you know you’re almost there!

As I was walking back, I passed a couple on their way up. One asked “is this Hanging Rock?”, and the other seemed unsure. Here’s a Top Tip: if you have to ask, you’re not there yet. It will be quite obvious once you arrive. 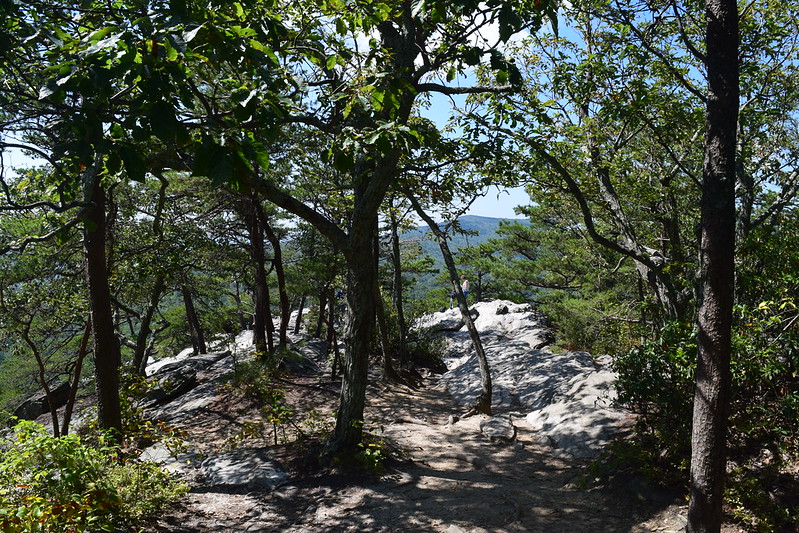 Speaking of arriving, here we are! 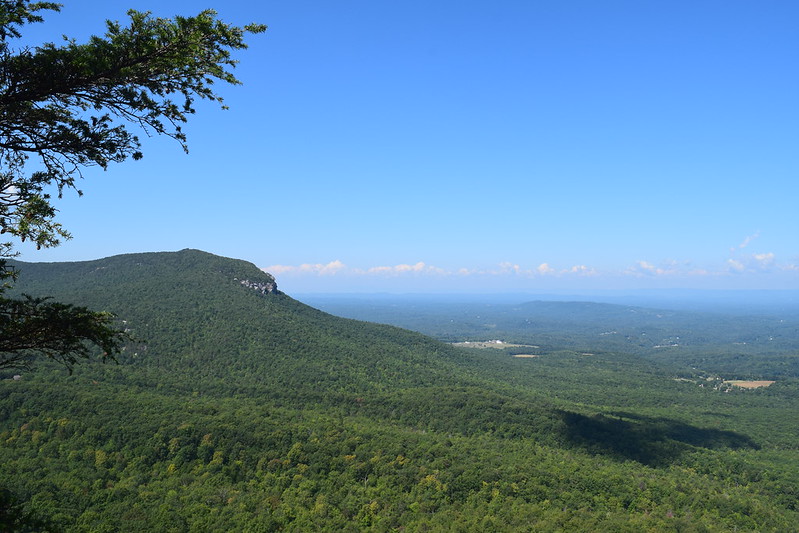 I’ll give you some more shots of Hanging Rock in a moment, but first I’d like you to pause and admire what a great day this was! North Carolina can yield some nice photographs too, with enough effort! (If you zoom in on only one of my photos in this post, make it this one :)). 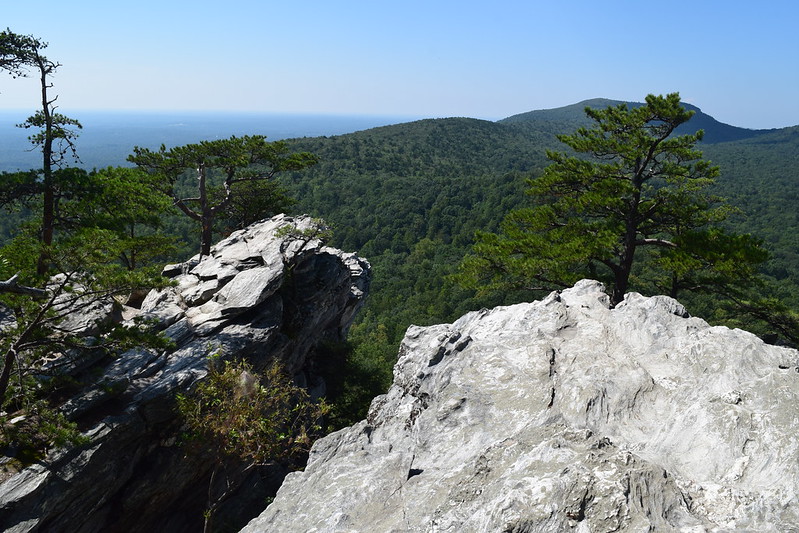 I climbed all around to try and provide you with some conception of how crazy Hanging Rock is, but I don’t think any one photograph can do it justice. It’s just a massive, jutting series of cliff faces. 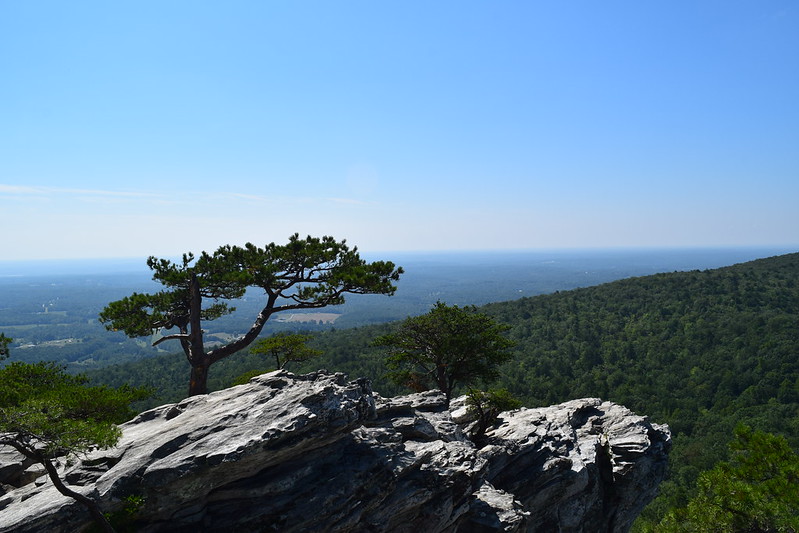 Perhaps most impressive are the few trees that manage to hold on. Hanging Rock is definitely ideal for taking broad landscape photos; you get them even when you don’t mean to just because you can see the landscape all around! 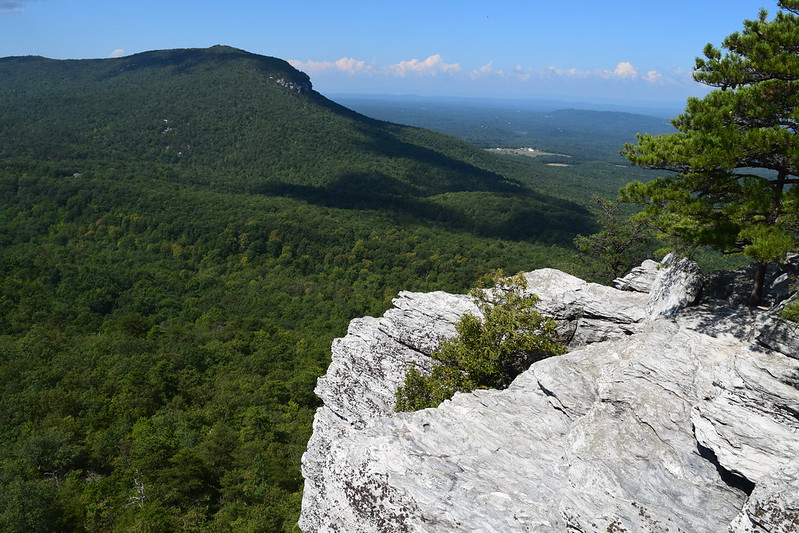 I climbed down the other side a bit to get this shot. There’s a big fissure that can either be circumnavigated or jumped. You can guess which one I did. 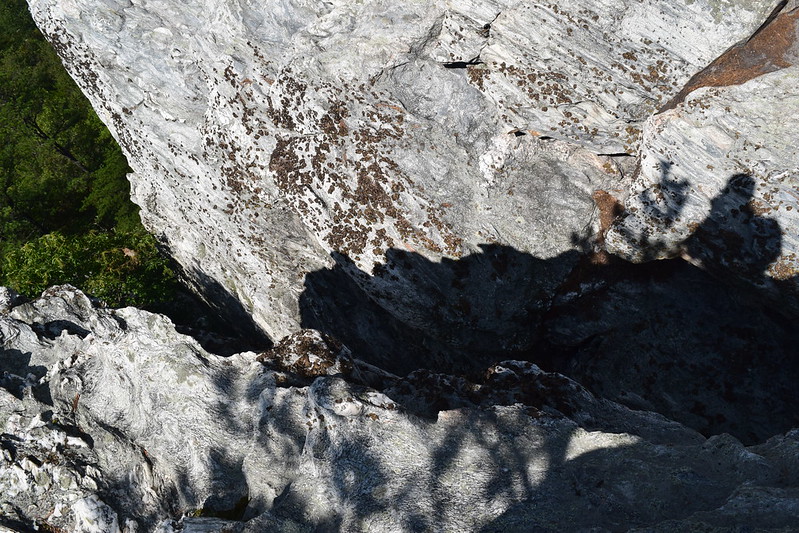 Here’s a shot down said fissure. There’s a lot of down there. 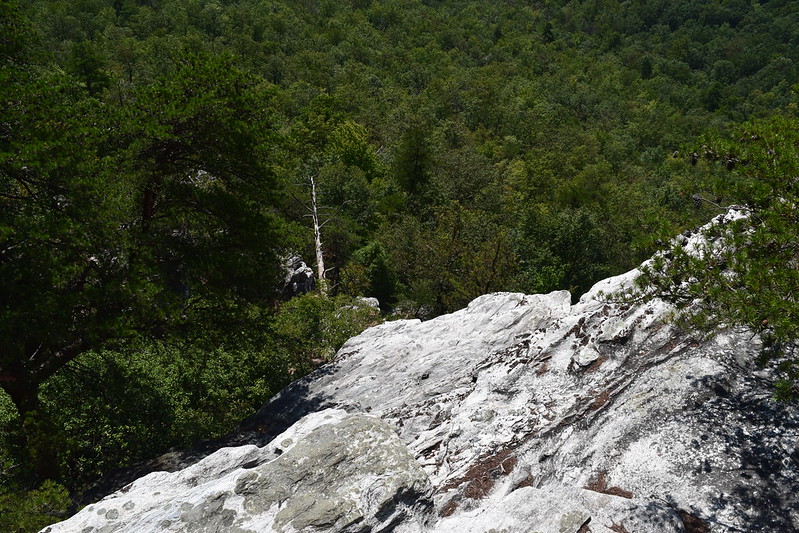 Hanging Rock is a great place to induce vertigo. These are the trees I walked through on the way up. If you stand on the rock long enough, you will probably see a bird flying below you. That’s always a fun one to mess with your equilibrium! 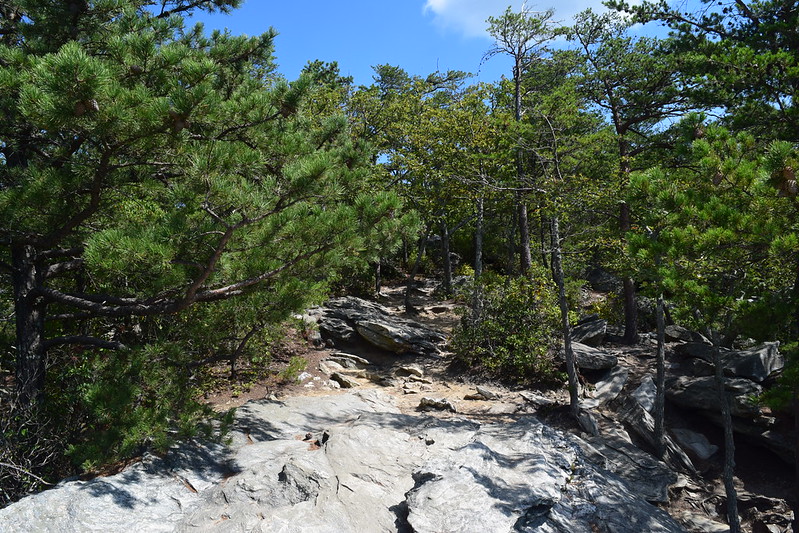 And here’s a shot back toward the trail.

I hope these shots have helped give some sort of conception of just how much rock there is at the top of this hill! 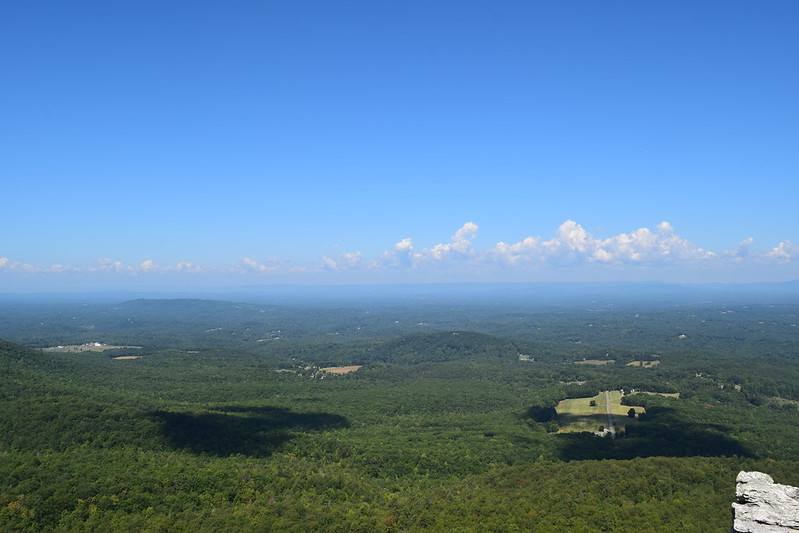 After telling you for a while what great scenery you can get from the rock, I’m finally going to show you some! 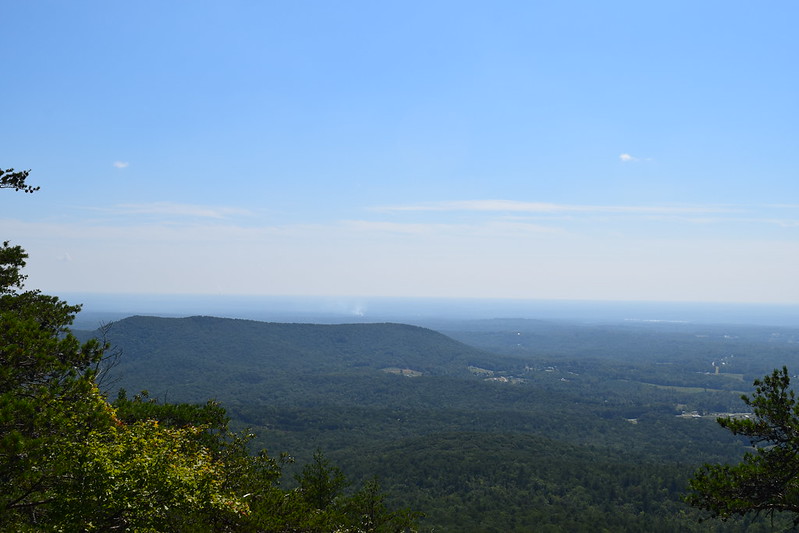 To a Kiwi it would be almost unimaginable to be this high up and yet not see water in any direction! Yet even though North Carolina is a coastal state, there’s over a hundred miles between Hanging Rock and the ocean. 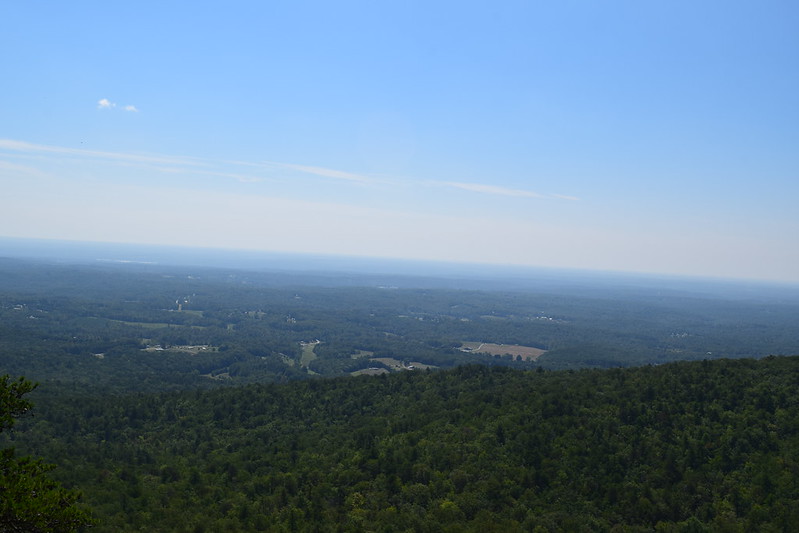 Even on such a clear day, the scenery dissolves into haze before it runs out. 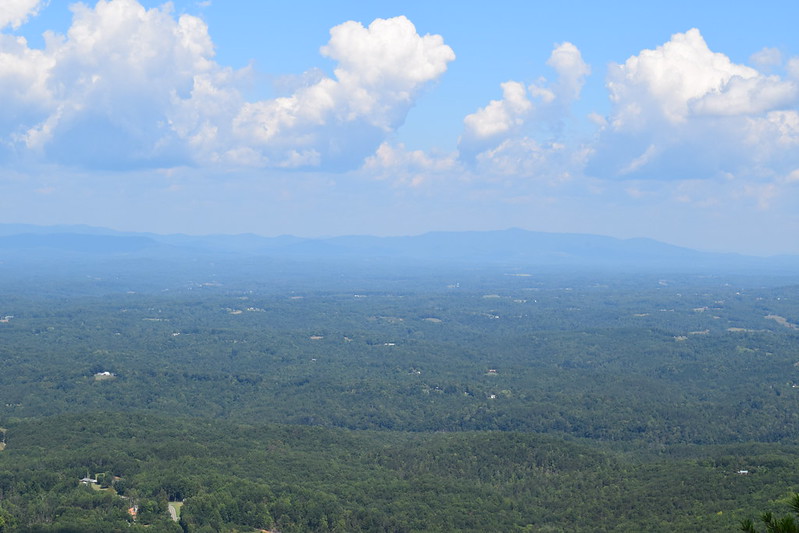 Central NC is approaching the mountains and as such has its share of peaks. There’s definitely more in the distance though. 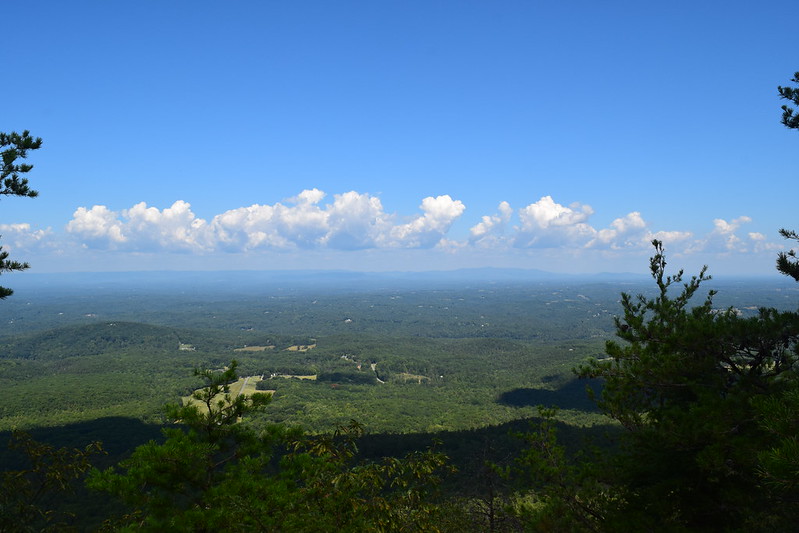 And if you climb to the side a bit, you can see out even further around the trees! 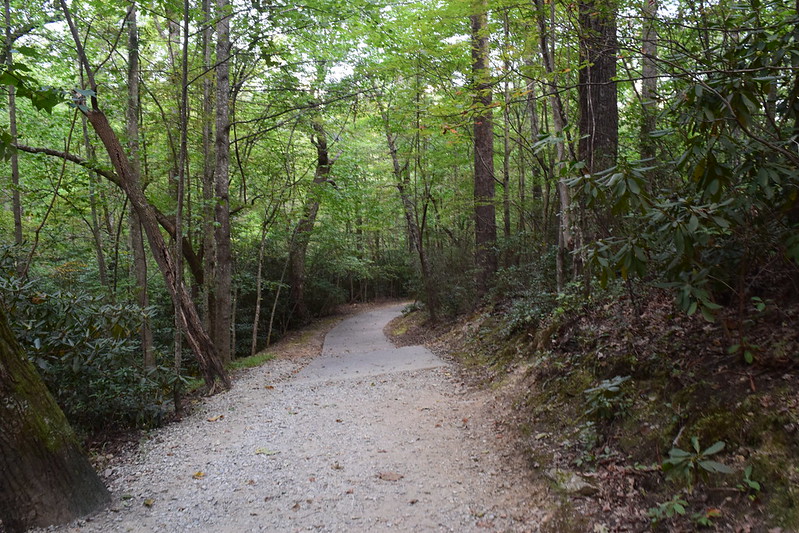 But the day was marching on, so it was time to head back down. As you might imagine, it’s much easier going the other way! Here’s where the gravel turns back into pavement.

We’re not done with Hanging Rock State Park quite yet, though! Come back next time to see some waterfalls!

(I did this hike in 2016, I must admit, so next time might not come as quickly as you may hope…but it will come!)