Longest gap between parts 1 and 2 ever? Possibly. C’est la vie. But now I’ve got the new Imagine Dragons album playing on shuffle and I’m ready to get back into the photoblog groove. Let’s do this thang. 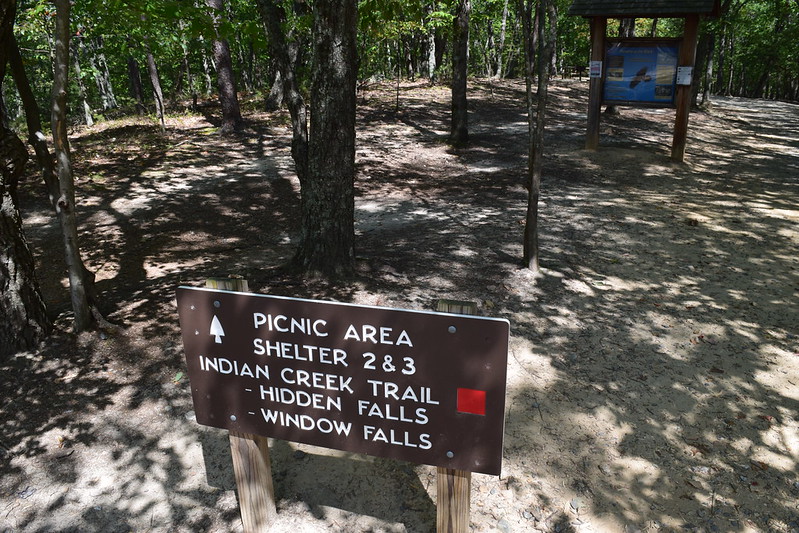 There are a few different waterfalls at Hanging Rock State Park available for exploration; on this trip I chose to just visit Hidden Falls and Window Falls, probably because I’m lazy. 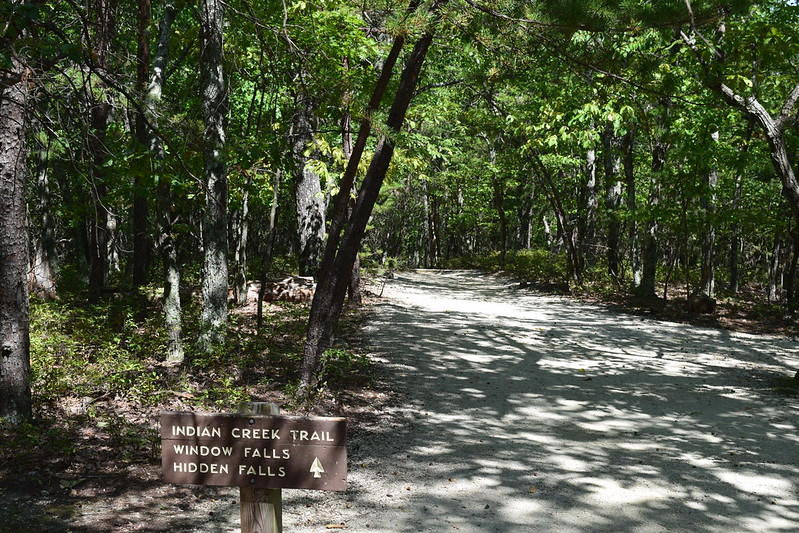 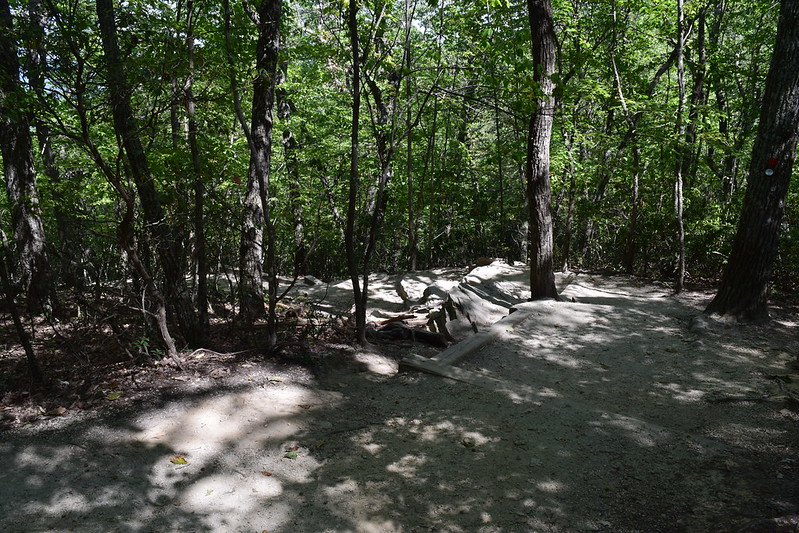 It is my least-favorite type of trail; the one that starts out going downhill. It becomes steep enough to require switchbacks, such as the one seen here. It’s still well-paved enough that it never truly becomes rough going even when returning back up the hill, but if you go for a nice refreshing splash in the waterfall you’ll get all hot and sweaty again by the time you reach the carpark.

This admittedly does feel a bit like reaching for things to complain about, so let’s press on. 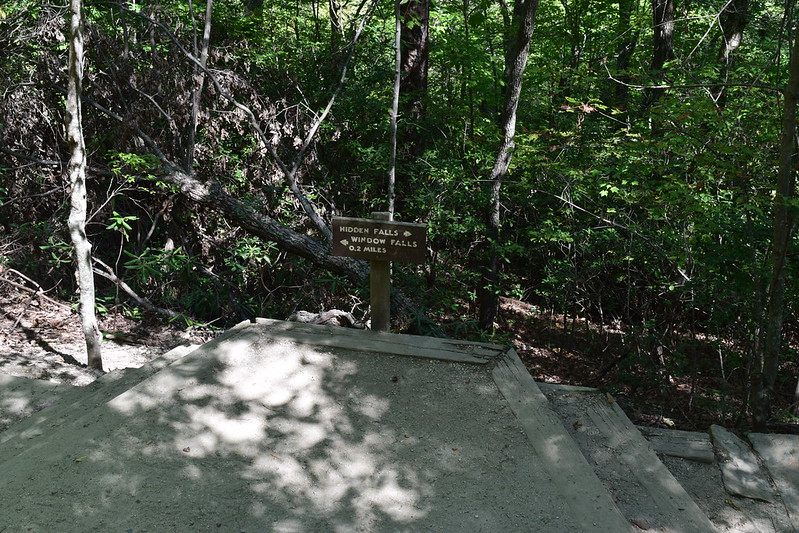 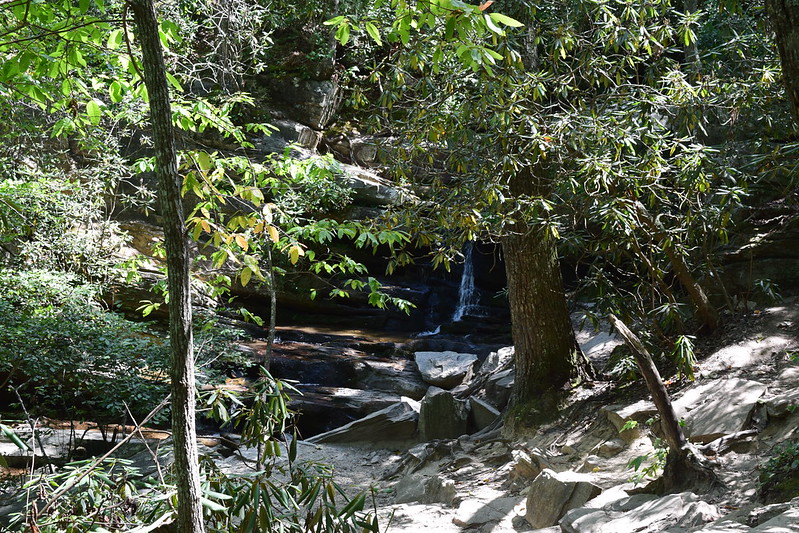 Oh, because it’s literally right here. I guess let’s do this one first then.

(Can we talk about the complete misnomer for a moment? In what way are these falls hidden? I realize that Hanging Rock did not originally have an asphalt carpark and well-paved trail right to the falls, but you can hear them from quite a ways away and anyone following the river will stumble right over them (hopefully not literally). I suppose compared to some of the much larger waterfalls in the area these are relatively hidden, but still, it’s not like it takes a lot of work to find them.) 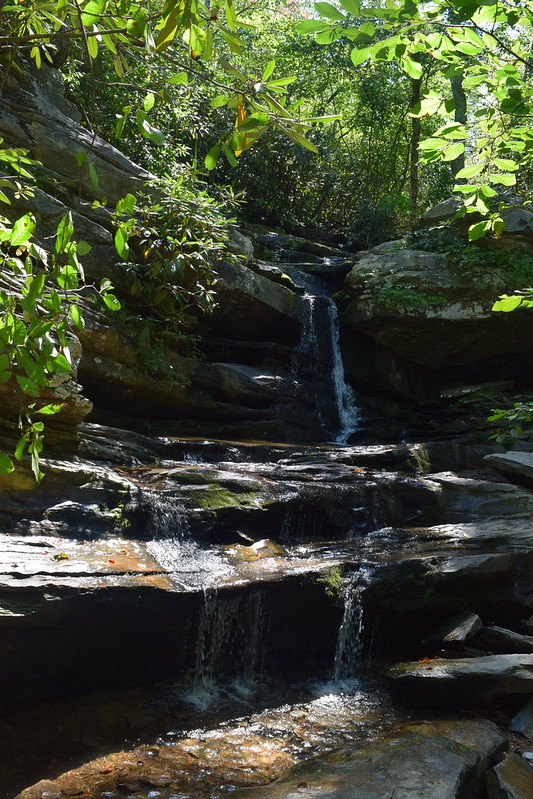 It’s been a hot and dry Summer, so the falls, never especially impressive to begin with, are barely a trickle beside most of the ones featured here. But since it was basically no extra effort to see them, hey.

I can take a few steps back to make them slightly more impressive. 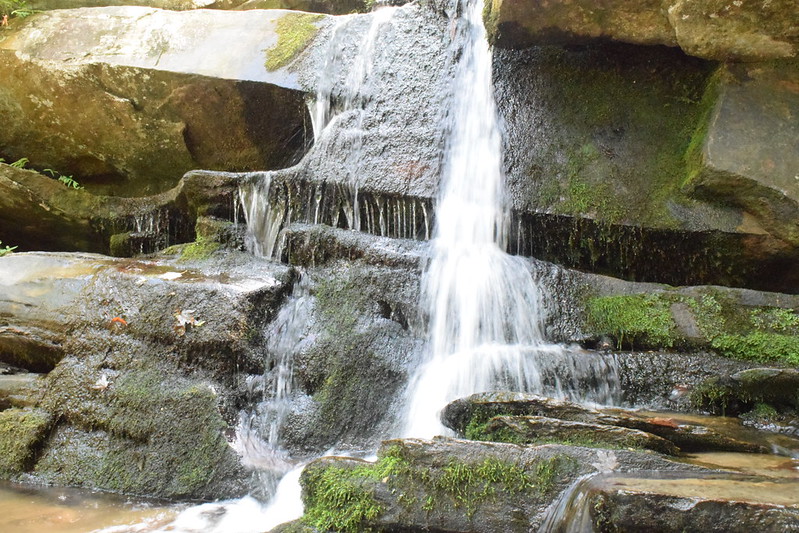 I tried taking a long exposure to get a nice super-artsy shot, but it’s just so daggone bright outside today that 1/15th of a second was the slowest I could muster (and the upper left is still a bit blown out). I know all of you photo aficionados who appreciate all my artsy shots are totally disappointed ;) 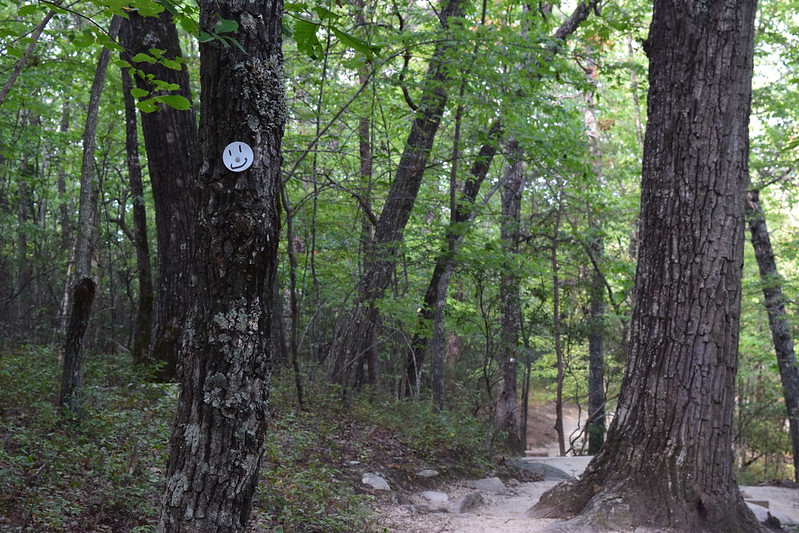 Moseying down the trail to Window Falls, I came across the world’s most cheerful trail blaze. 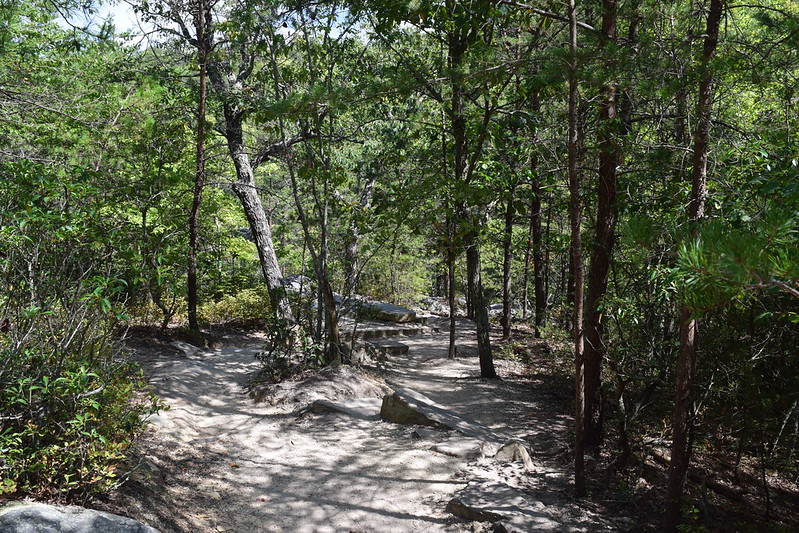 This image probably illustrates the intended meaning of Frost’s poem better than most of the ones I reference it for. 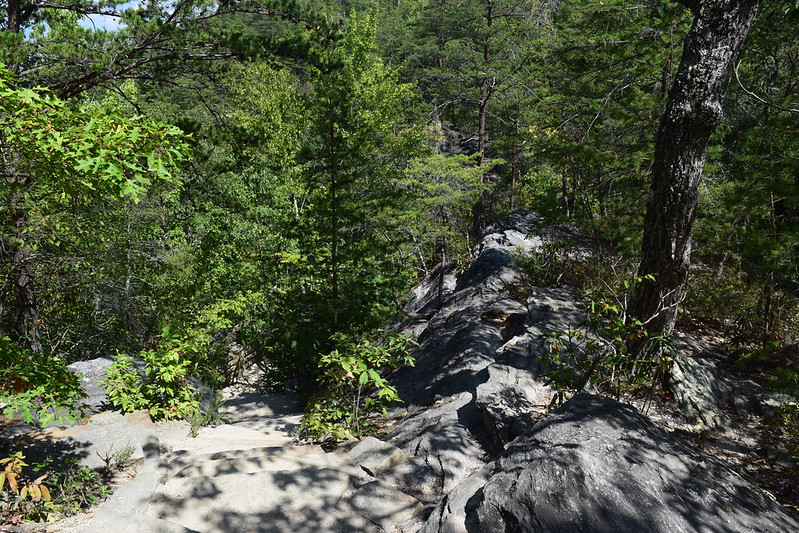 Upon reaching the falls, you will first come upon this outcropping of rock. This is actually the upper bit of the falls, and I wandered around this bit for a while. I got a few photos but nothing particularly interesting, and no shots of the falls from above, so I’ll leave all that out of the narrative. 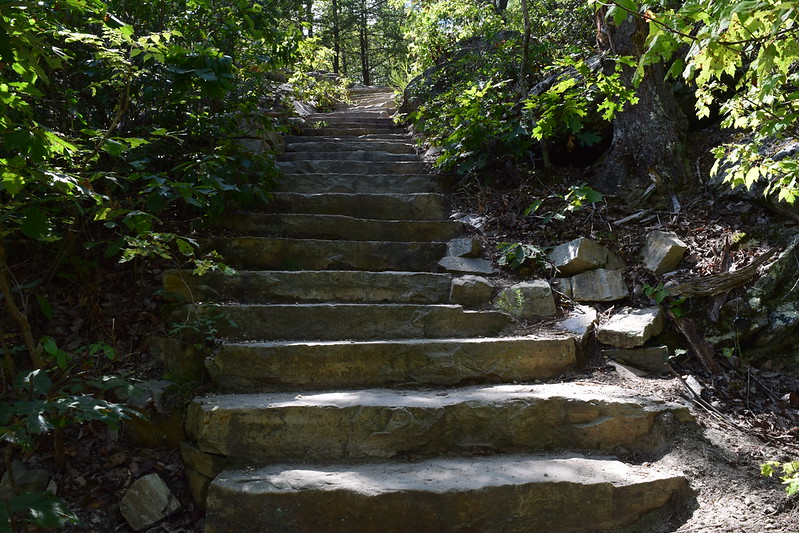 Getting down to where the actual falls are requires descending this lovely bit of stairs. 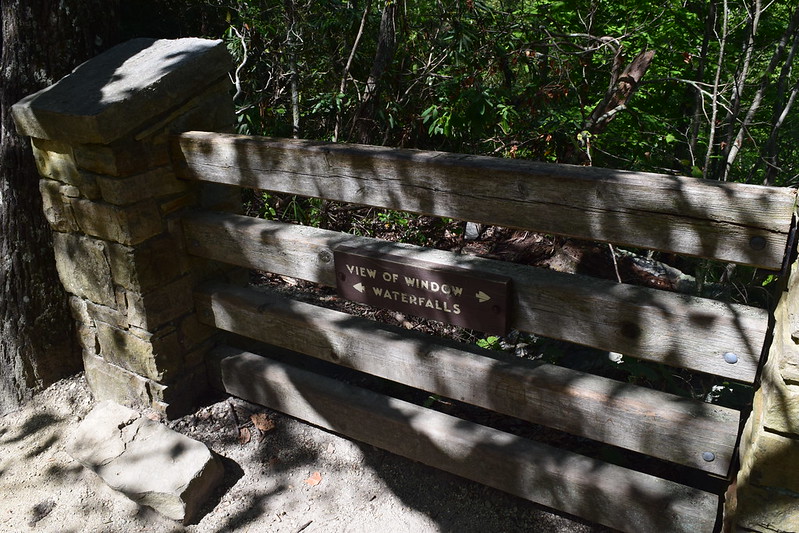 We are then faced with a decision. I didn’t realize “Window Falls” was a multiple-choice question! Turns out this choice is about as meaningful as the split paths above. 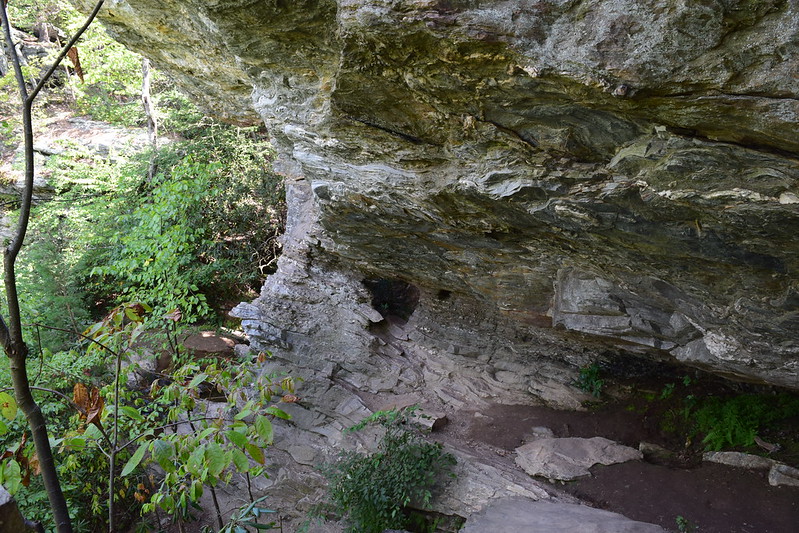 Turning to the right, which is the correct answer to the sphinx’s riddle, we see the eponymous window. 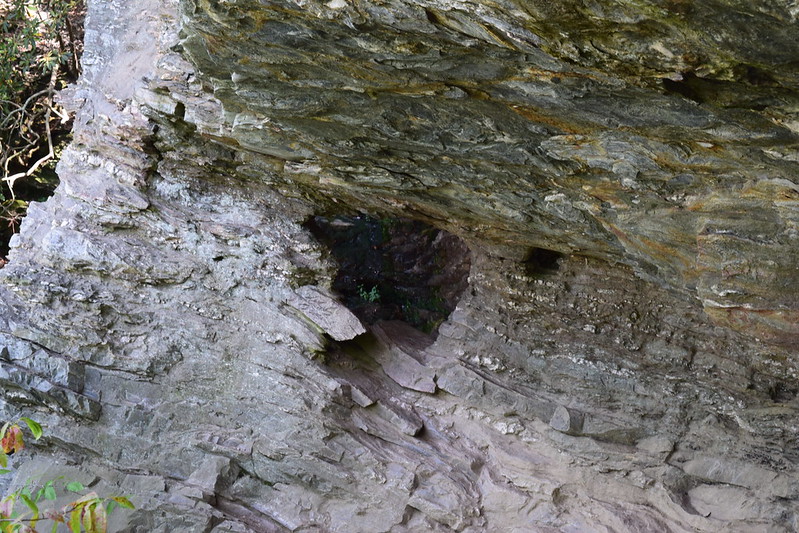 There’s a bit of fence up and some rock face to climb, but there’s nothing other than one’s inherent physical limitations preventing hikers from making their way right up to the window. 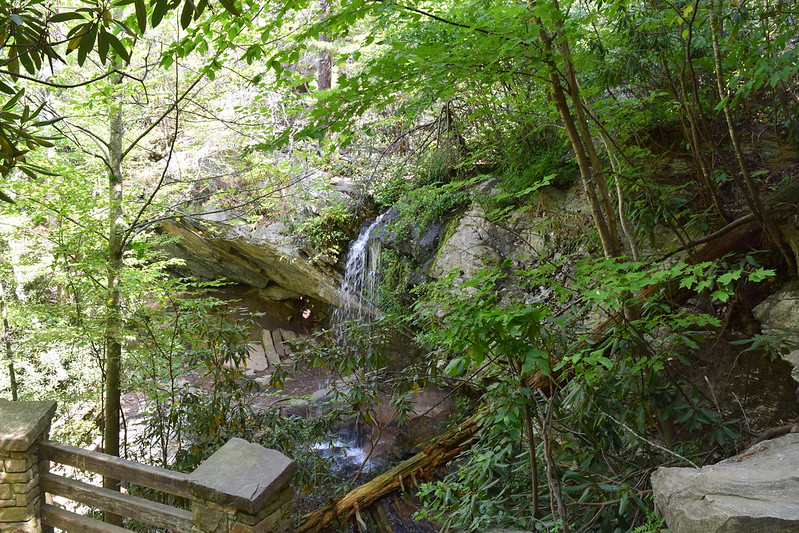 And through the window is, well, Window Falls. 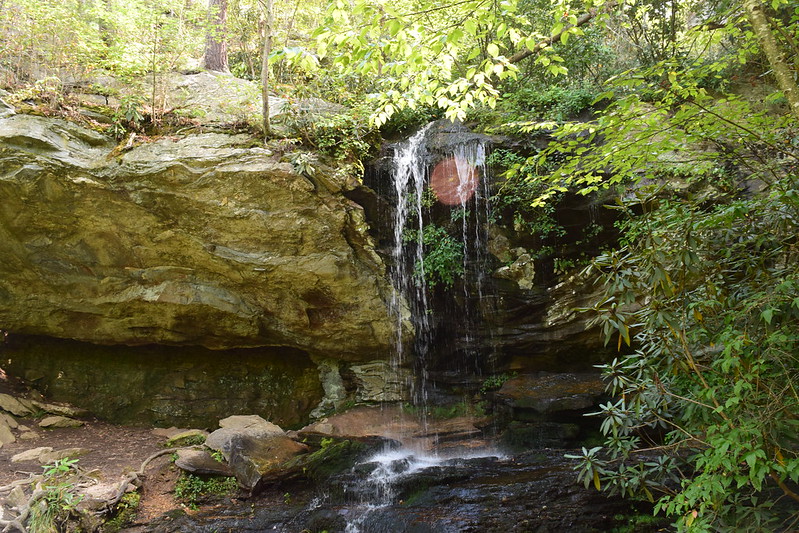 The falls, in all their glory…complete with lens flare. Bad photographer. No cookie. 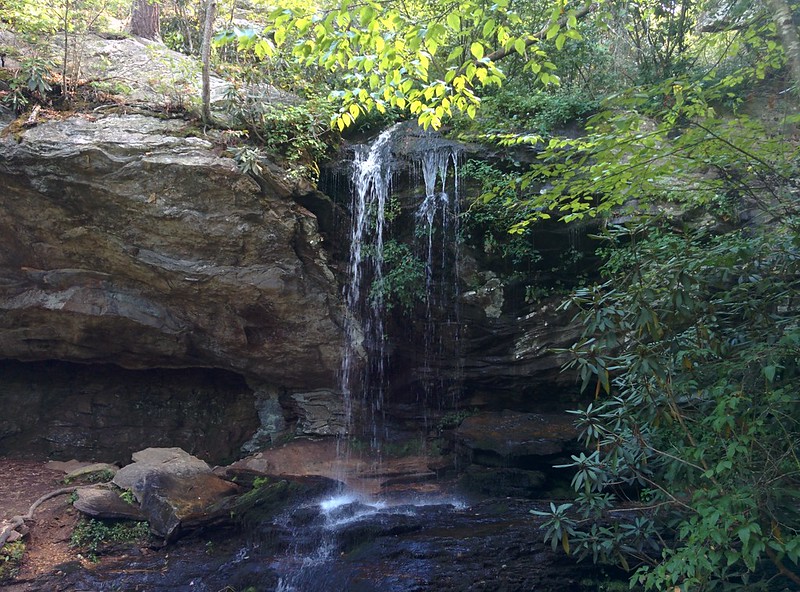 Thankfully I captured a backup shot with my Nexus 5. 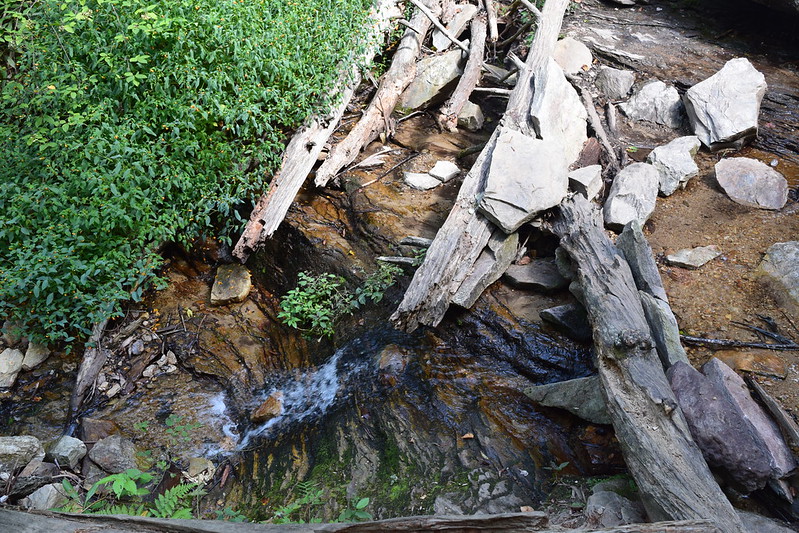 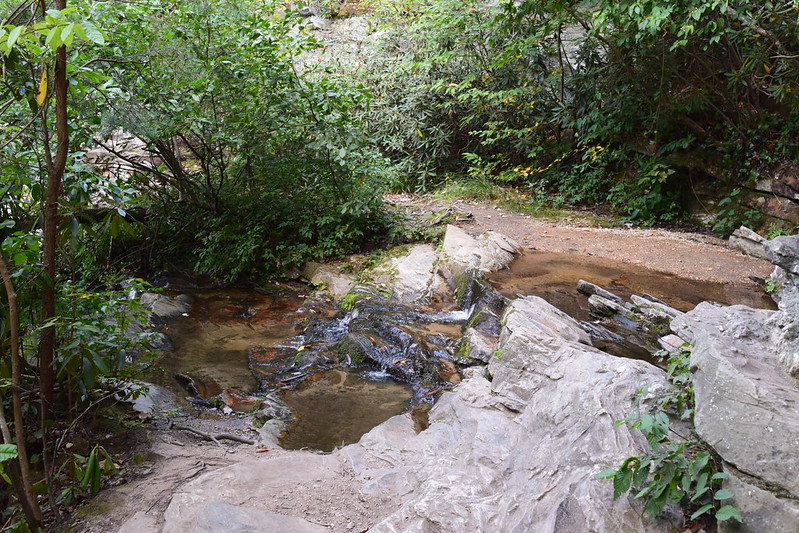 …to where it pools and lazily flows… 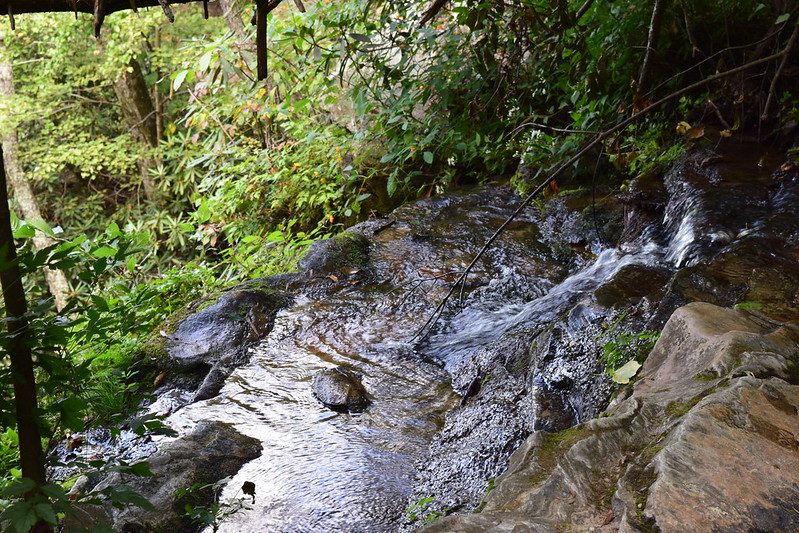 …into this bottom pool… 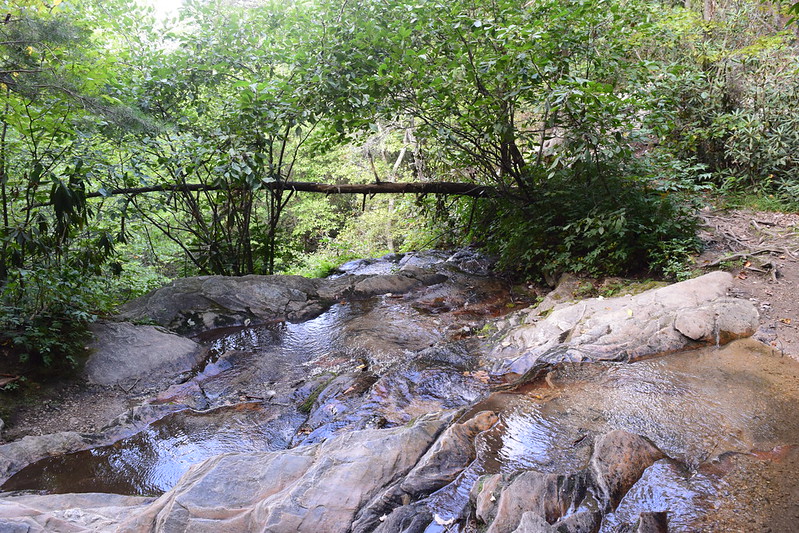 …and then over this cliff.

(I don’t know if that tree is a lazy attempt to keep hapless explorers from tumbling off the aforementioned cliff or if it’s just a coincidence).

Did I walk around to the bottom to see the rest of the falls? Dear reader… 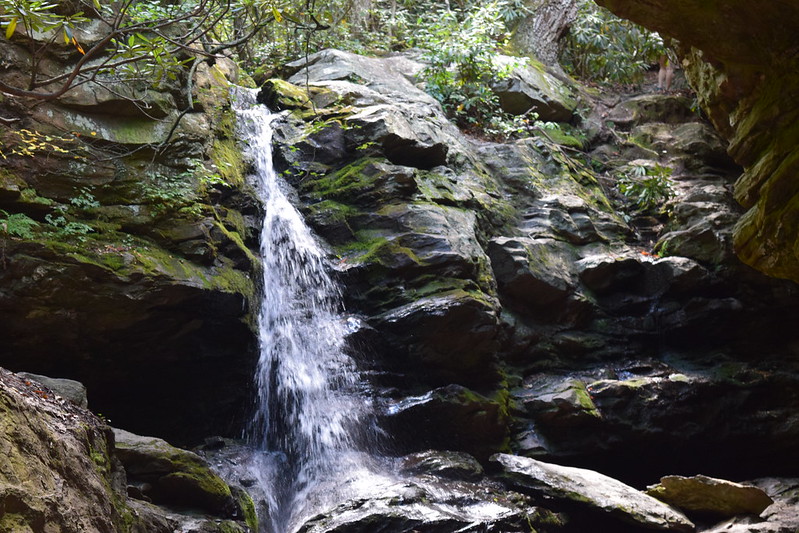 …how could you ever doubt!? (Is the one shot I took of the lower falls absolutely terrible? Yes, that’s also true.) 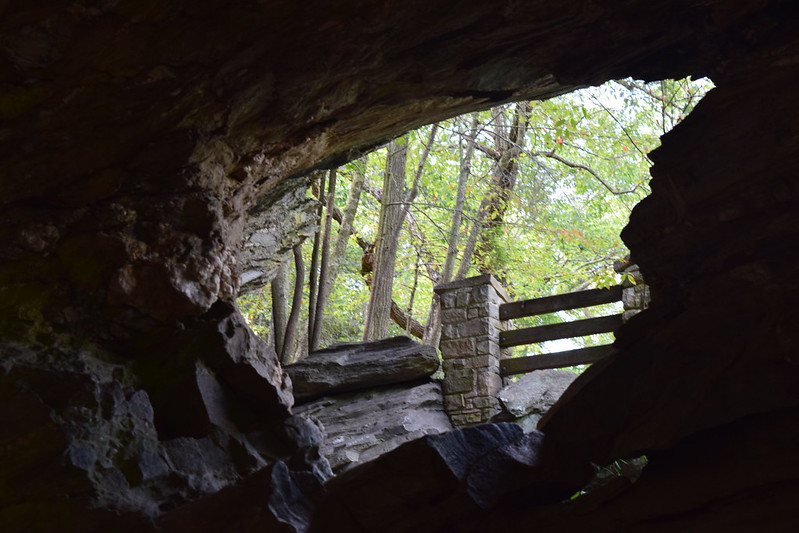 There you go. Those are two of the easiest to get to and, if we’re honest, least impressive waterfalls this park has to offer.

That’s all from Hanging Rock State Park, but hopefully that whetted your appetite because more adventure awaits….