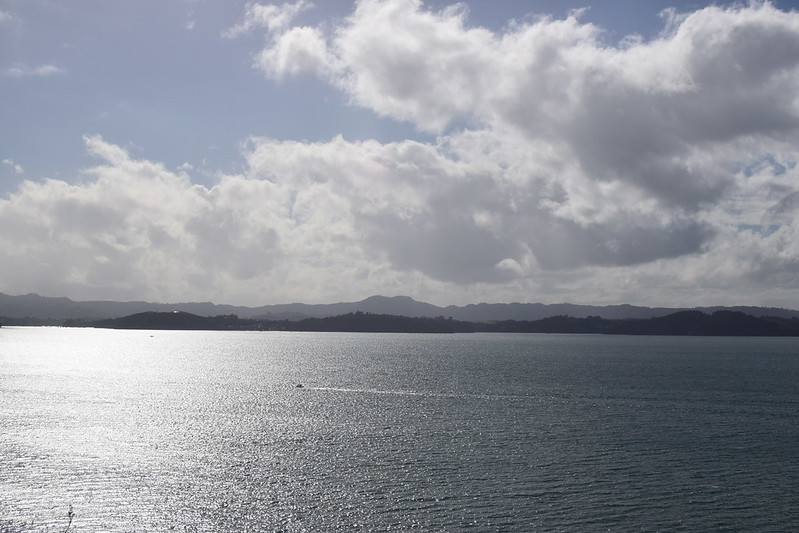 A friend of mine needed some heart healing, and I needed a place to go and take some photos. This seemed to me to be a two birds, one stone situation, so we set off North to Mahurangi, just South of Tawharanui, and drove to a place called Scandrett Regional Park. 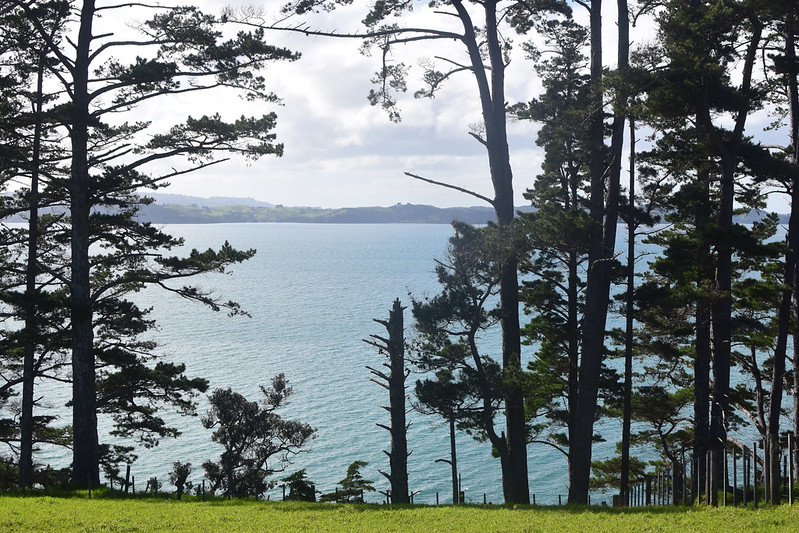 Scandrett reminds me quite a bit of Duder Regional Park, with its cliff faces and beautiful views. Fortunately, this time I didn’t fall down a cliff. 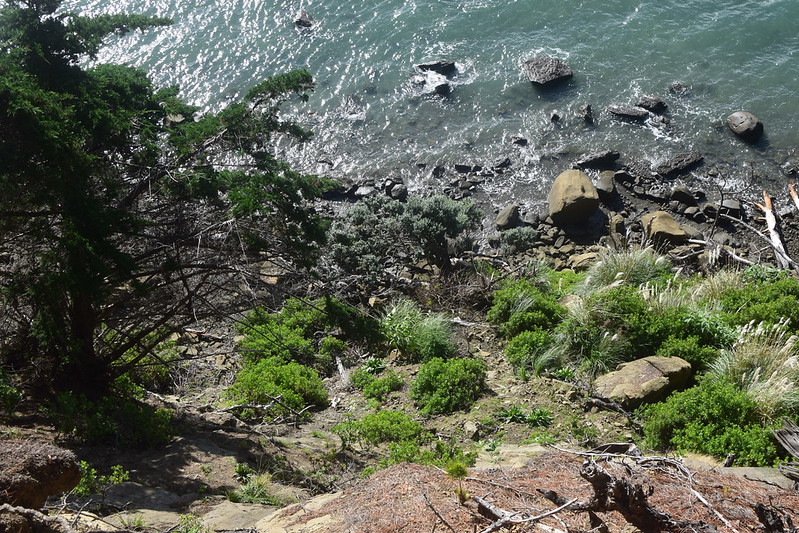 Which is just as well, since the drop does not appear conducive to either remaining intact or climbing back up. No doubt Taylor would disagree and manage to somehow teleport to the bottom unharmed, but he was not with us so we remained at the top of the cliff. 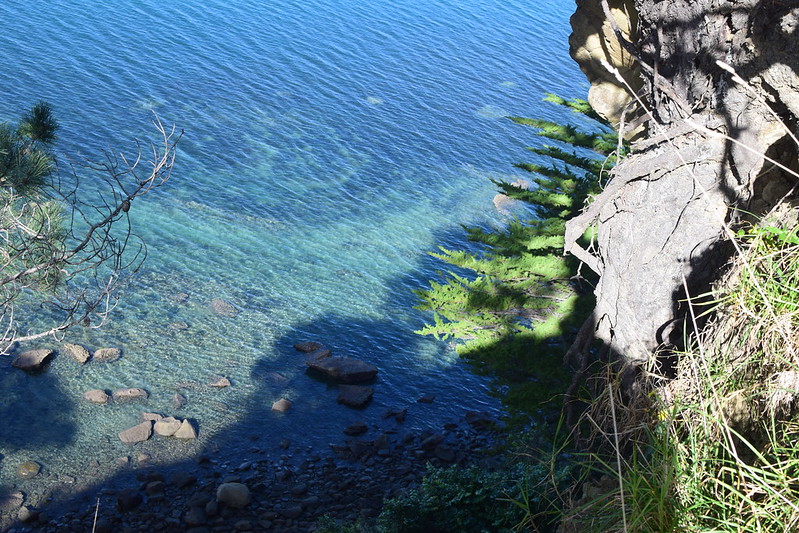 Besides, while at the top we can fully enjoy the view down into the many small coves and rocky bays present along the shoreline! 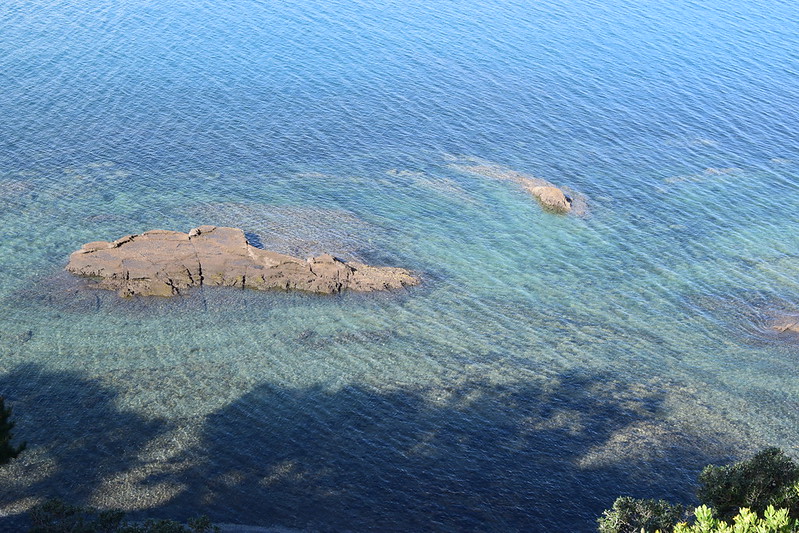 The water here is so clear we can see the contours of the seabed from all the way up at the top of the cliff face! 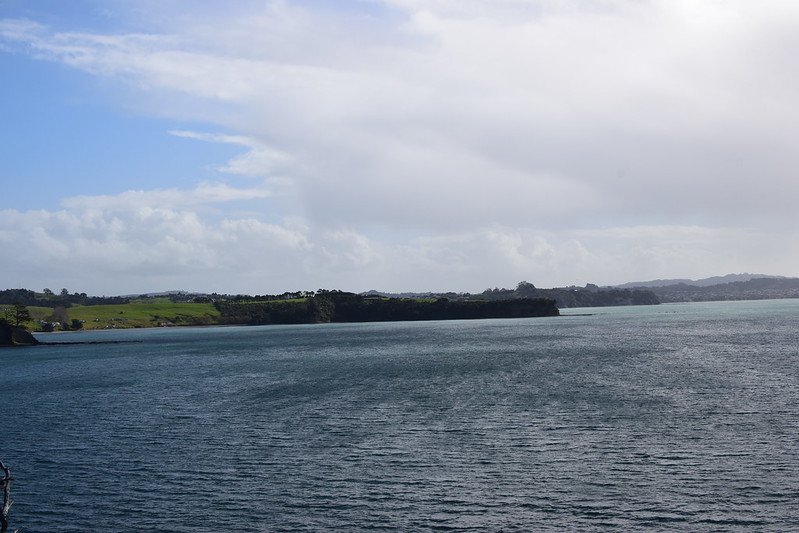 The views out into the gulf are also quite good. This shot is North along the coastline looking at the base of Tawharanui. 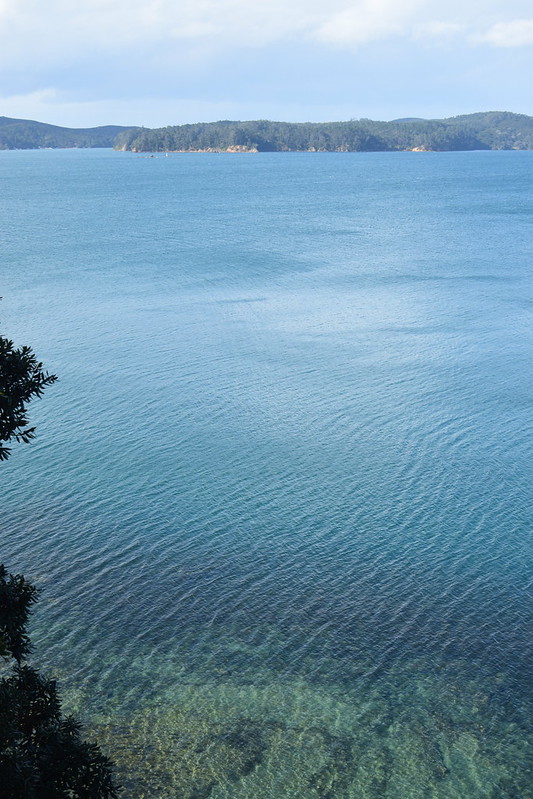 Kawau Island, discussed in my Tawharanui post, is also quite visible from Scandrett Park. 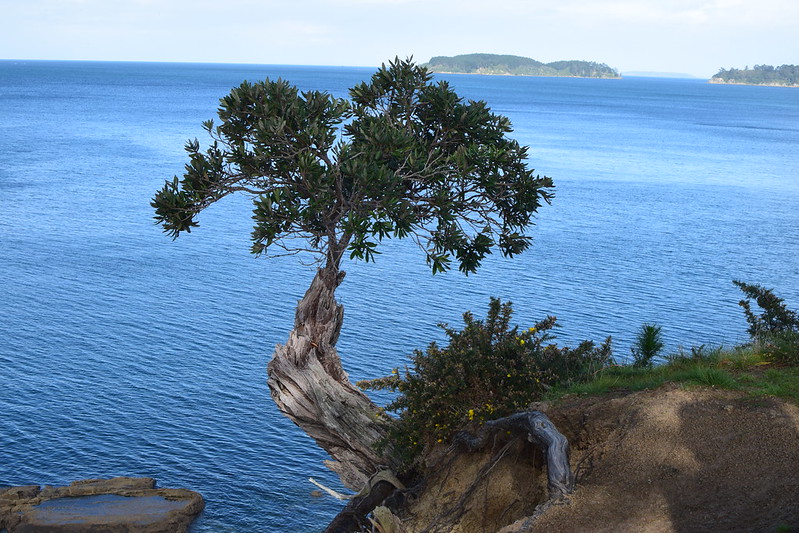 Always being one for cheesy analogies, I told my friend to hang on even when it’s tough, just like this little tree. I don’t think he appreciated it as much as I had hoped, but was perhaps cheered slightly by the fact that I thought such a cliche would cheer him up. So I guess that’s a win? 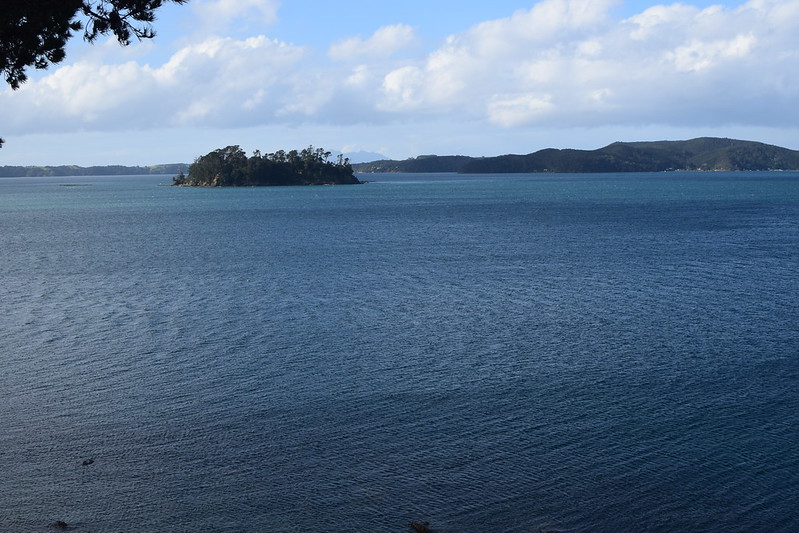 That would be Takangaroa Island in the foreground and Kawau in the background. 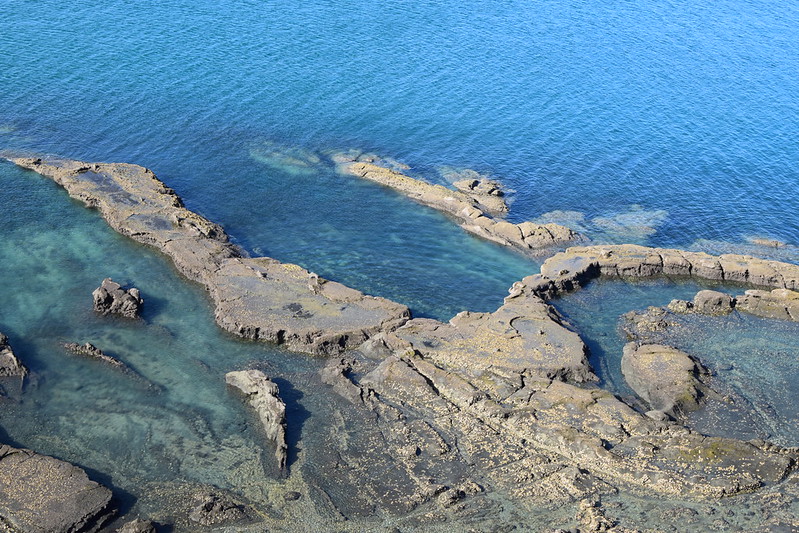 If you do have a desire to go down closer to the water, there is a trail that will allow you to do so. Do be aware of the tides, as the difference can be quite dramatic! 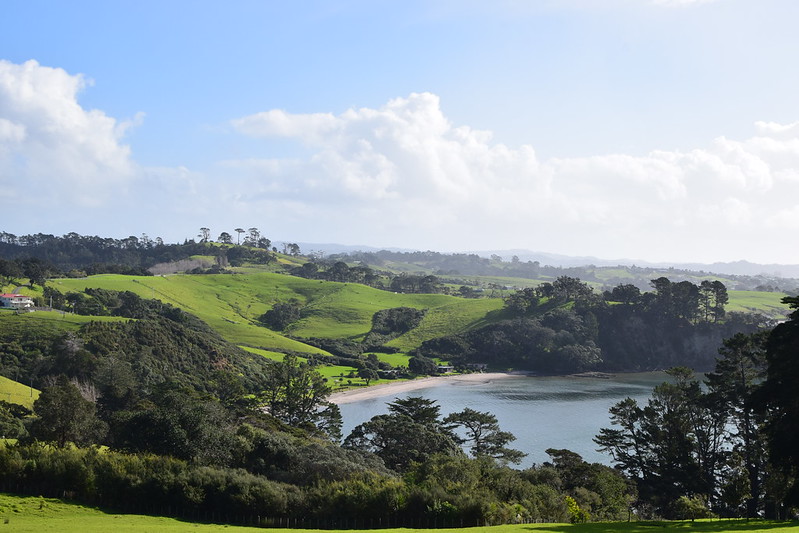 Scandrett Regional Park is a truly beautiful place, and whether you are getting over a heartbreak or just wanting a nice place to take a bit of a walk, I can wholeheartedly recommend it. 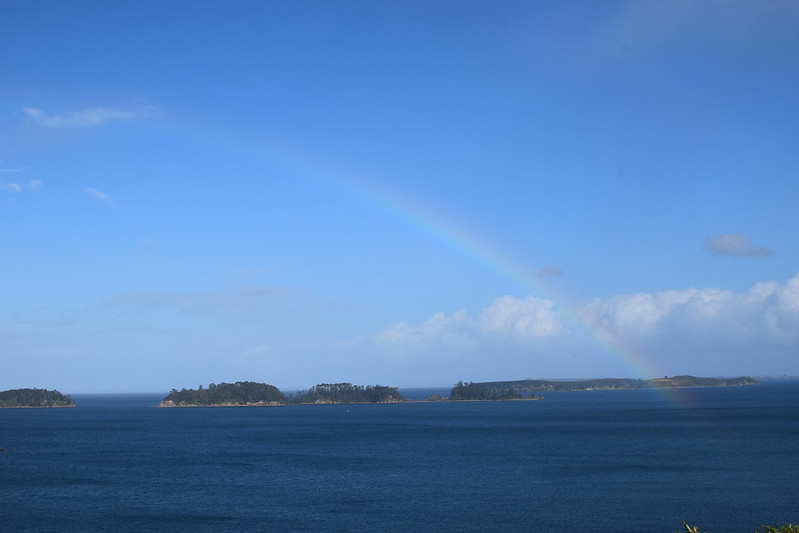 In the Biblical story of the flood, God uses a rainbow to promise Noah that he will never again send a flood to destroy everything, which was mighty decent of him and probably reassured Noah significantly the next time he saw rain clouds moving in.

Regardless of whether a humanity-destroying flood is on your specific list of fears or not, whenever I see a rainbow it makes me think that everything’s going to be OK. Our Sun, which is amazing far away from the Earth but practically adjacent on a cosmic scale, is constantly undergoing fusion and sending radiation to our little blue planet. When our atmosphere has water at the right density in the right place, it breaks some of the radiation which we call visible light into a spectrum due to refraction. All these incredibly vast and powerful forces are acting together and the end result is something so beautiful and ethereal that the first humans to see one thought it must have come directly from the finger of God. It’s a helpful reminder of just how insignificant our problems really are. 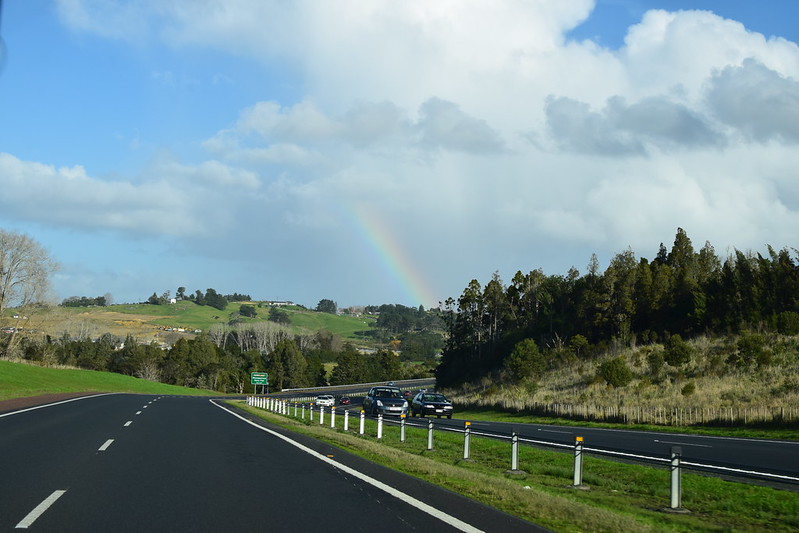 The trip home yielded a second rainbow, to drive home the point. 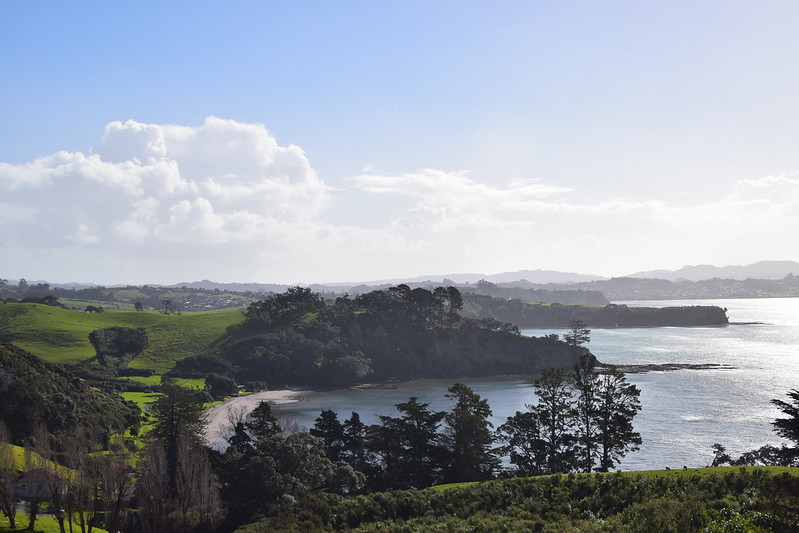 I hope you enjoyed this trip out to Scandrett! Next time, more beaches! And maybe some birds as well! 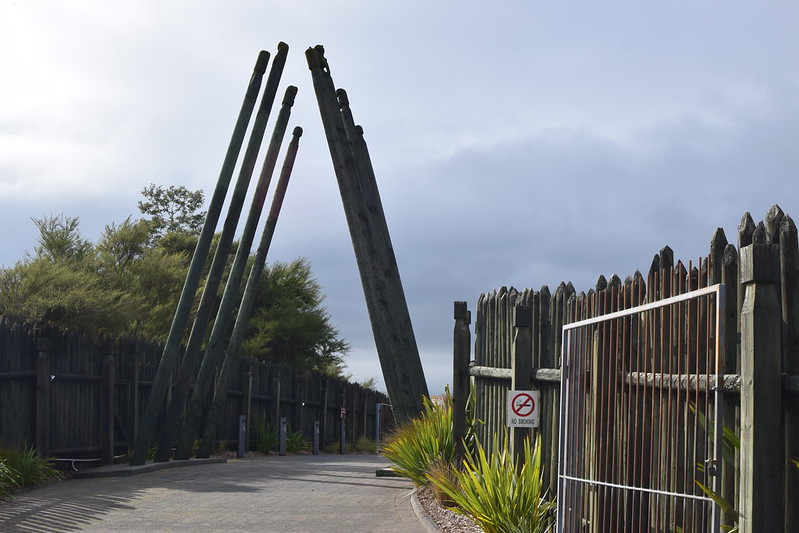 As part of our overnight trip to Rotorua, my girlfriend and I stopped off at Te Puia. It’s a combination Maori cultural center and geothermal area, which makes more sense than it might first appear because the geothermal pools were a big part of the Maori culture around Rotorua! 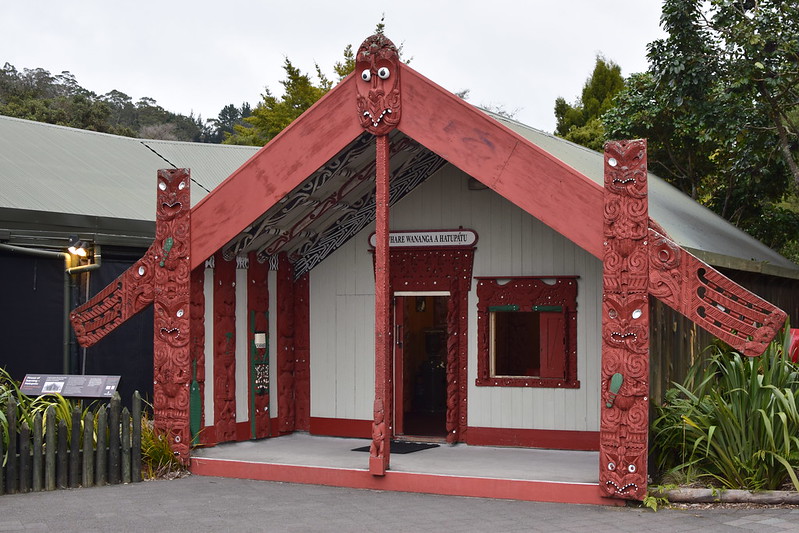 We signed up for the cultural performance as well as the entrance fee, so we got to see some quite talented performers show us what it would be like to be welcomed into a Maori village as visitors. 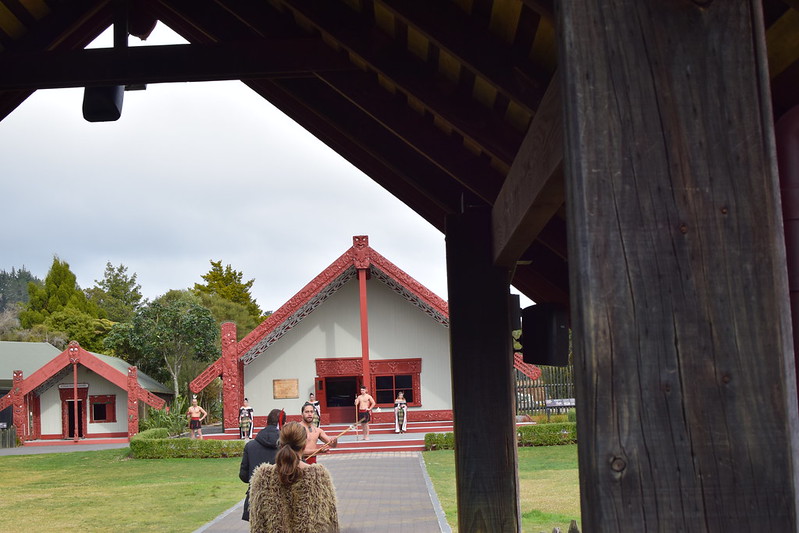 It first involved a fight to the death…or not! We had to choose a chief, who was given some words to say. We were then led into the hut. 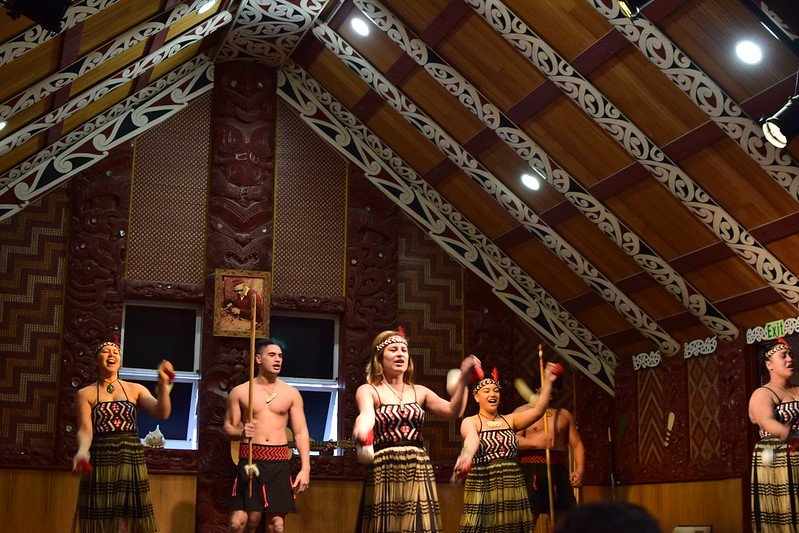 The performance was varied and quite long and entertaining. We’d seen a similar performance at the Auckland Museum, but this one was much more elaborate. It was cool to see a lot of traditional dances and songs! 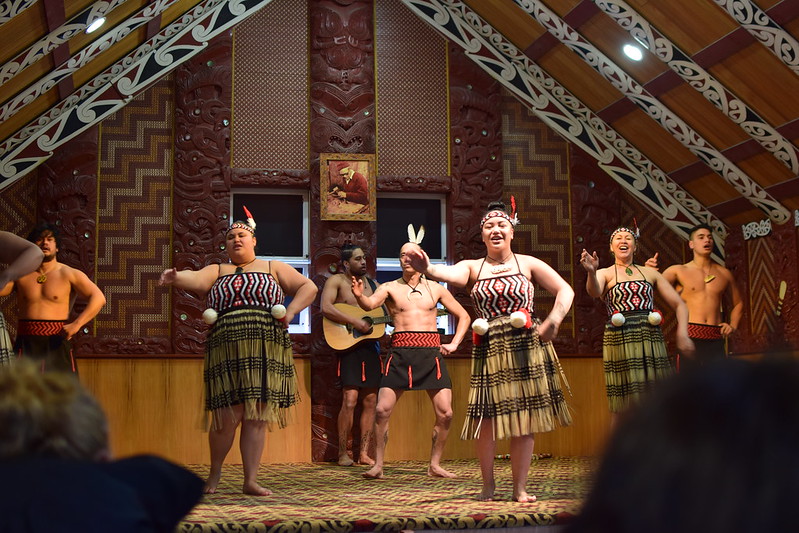 We were encouraged to take photos before, during, and after the performance, and I took advantage of that! It was really quite enjoyable. 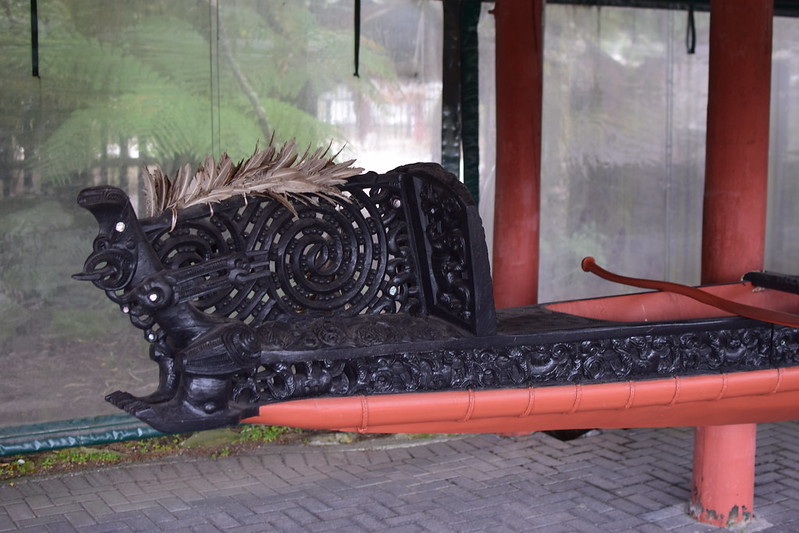 There were other structures and items around to look at as well. This is a waka, or canoe. 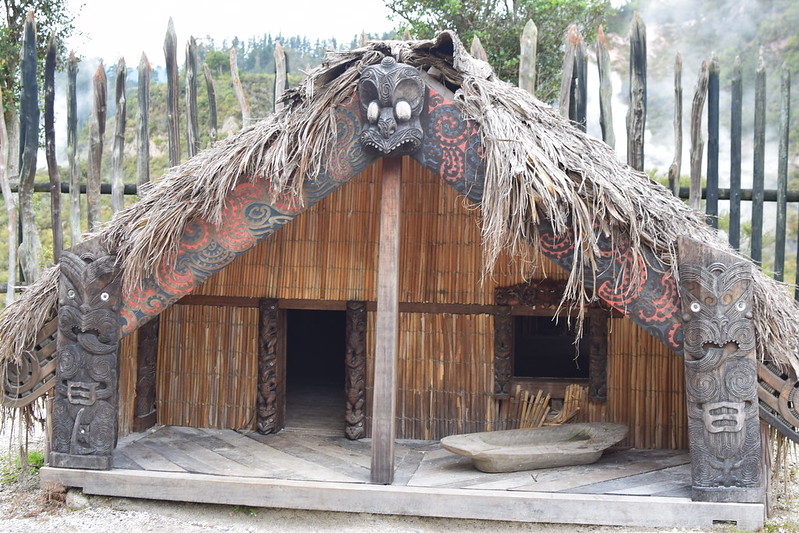 We got a chance to see a whole scale village. Despite being a largely primitive culture, pre-European Maori settlements were still quite elaborate. The Maori people had a rich and varied culture, which is thankfully still celebrated and taught in New Zealand today. It’s places like Te Puia which help preserve that culture, not just by putting it on display but by training people to do woodworking, weaving, and other craftwork just as it would have been done 300 years ago or more. 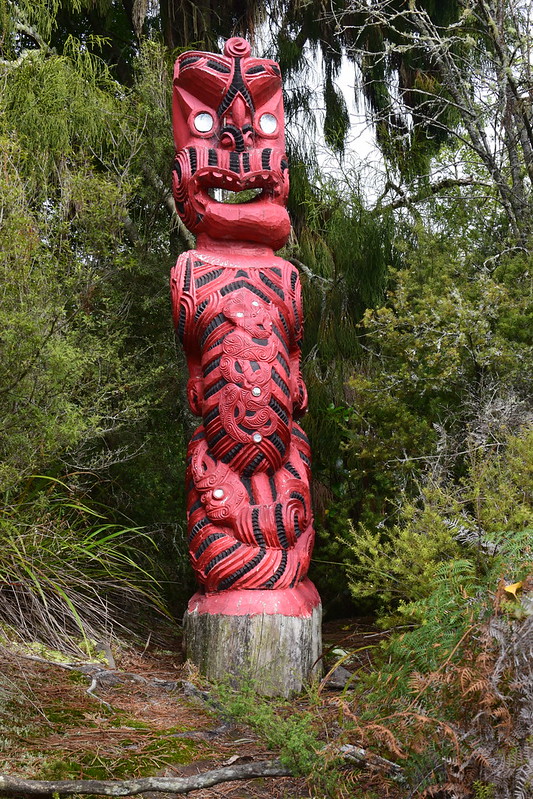 There is plenty of really cool sculpture and woodwork to see all over the area. 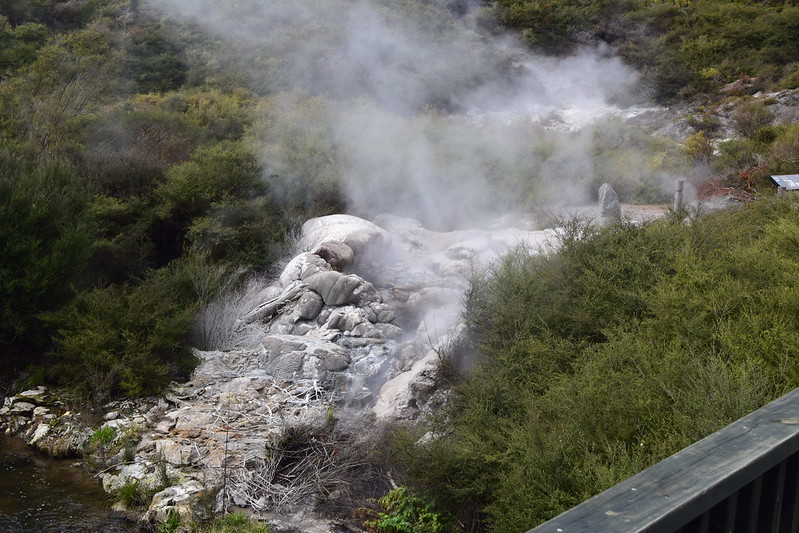 Much of Te Puia is a site of heavy geothermal activity. Walking around the back part of the park really felt like we were in another world! 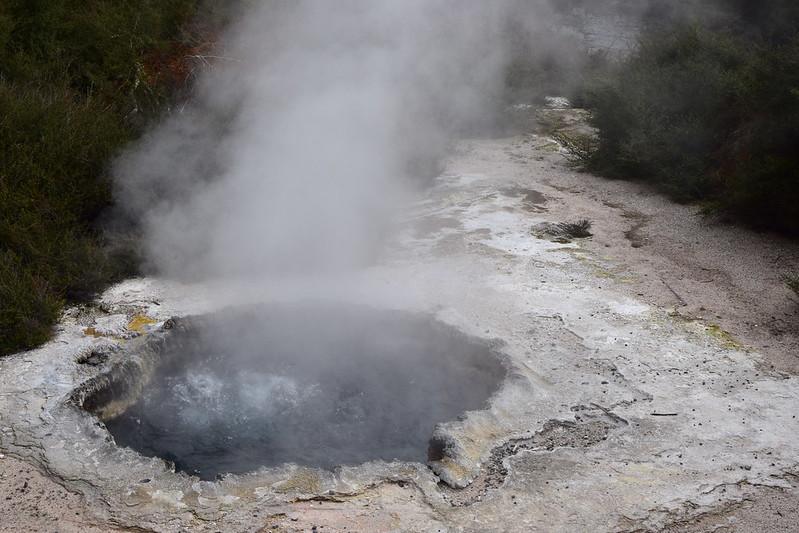 It almost feels sinister to see holes in the ground belching steam and sulfurous smells! 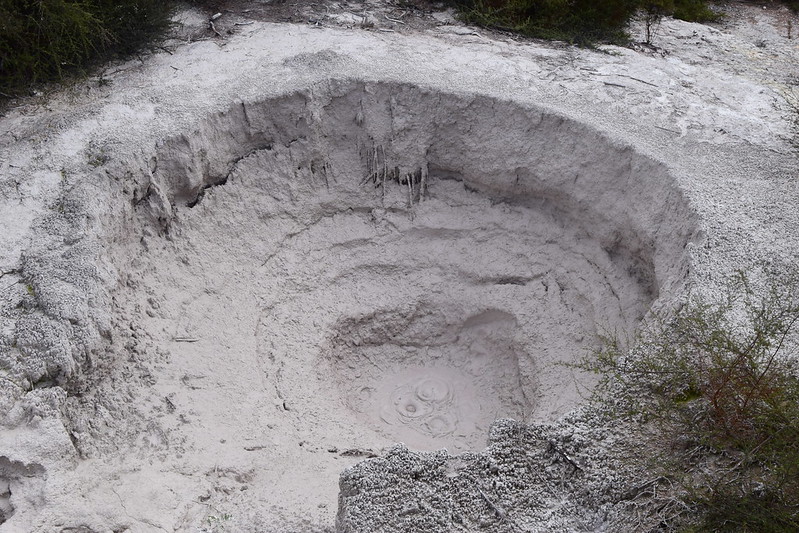 This mud is actually boiling! Rotorua mud is sold as a cosmetic product; the high mineral and sulfur content is supposedly good for the skin! 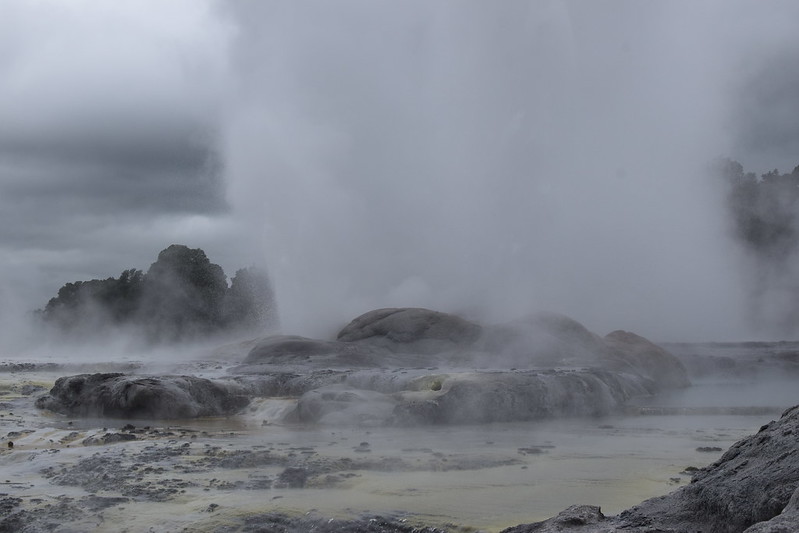 Te Puia is also home to the Pohuta Geyser, which erupts nearly every hour. We were there for much of the day so we got to watch several eruptions! Near the geyser are hot stone steps that are like naturally heated seats. As it was Winter, that was one of our favorite attractions! 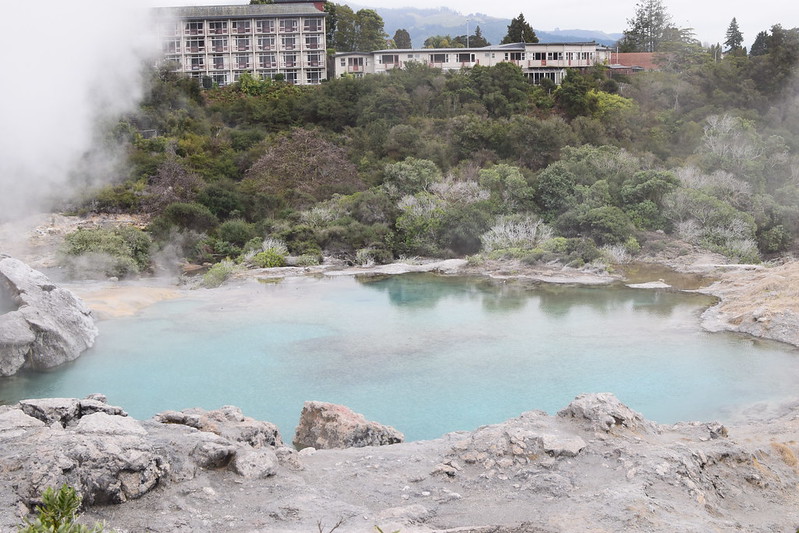 The minerals and high sulfur content turn the pools into a really neat shade of blue-green. I think this is a really nice color! 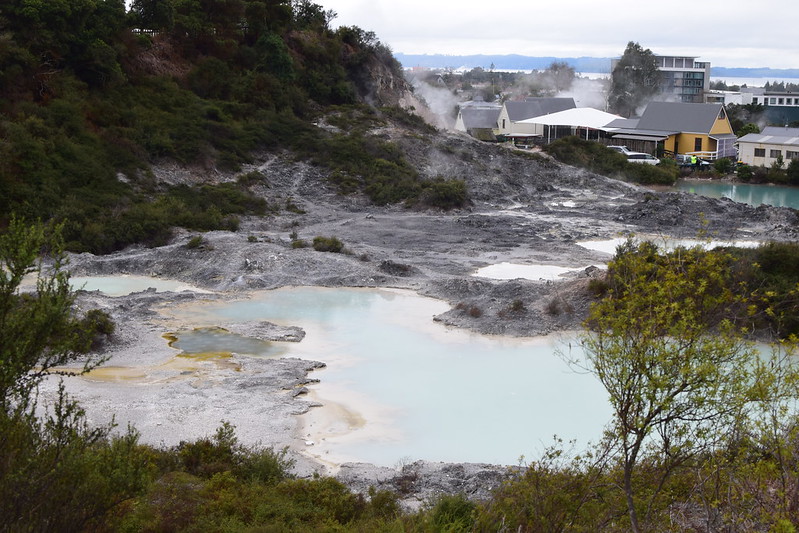 The sulfury, yellowish tinge around the outside of the pool is somewhat less attractive, but you gotta work with what you got. 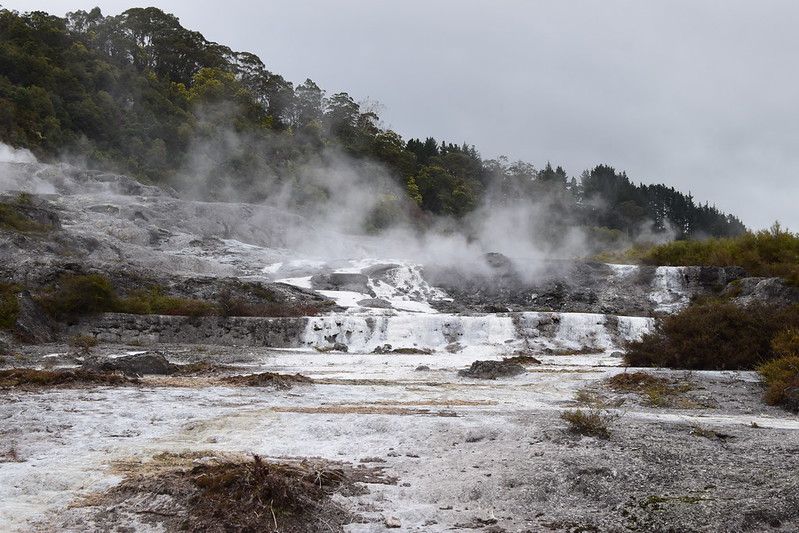 I hope you enjoyed coming to Te Puia with us! If you find yourself in the Rotorua area, it’s definitely worth the price of admission. Not only are you seeing some really cool stuff, you’re also supporting the continuation of the Maori culture and arts so future generations can continue to see this cool stuff.

Sadly, this is the last post from my girlfriend’s trip here to New Zealand. It’s also one of the last posts I’ll make from New Zealand myself! I’ll be returning to the US soon, but because I’ve been so dilatory at actually writing up my adventures, there’s still a couple of months’ worth of New Zealand content at least!