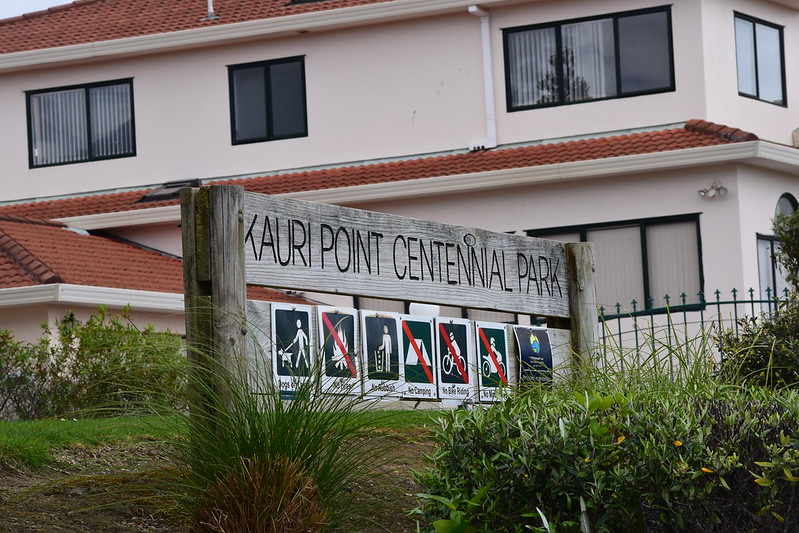 Let’s be honest: I’m not the easiest guy to go on a hike with.

Really, the problem comes down to birds. They just don’t do what you want most of the time. Sometimes I’ll stalk a bird for 15 minutes, only to have it fly away to some inaccessible treetop. Or sometimes a bird will be sitting on a branch and just won’t hop three centimeters to the left for a better shot. Any wildlife photographer fully understands these problems.

But people who just want to go for a nice walk tend to get frustrated when I plop down on a tree stump to wait for a bird to, hopefully, strike a photogenic pose. 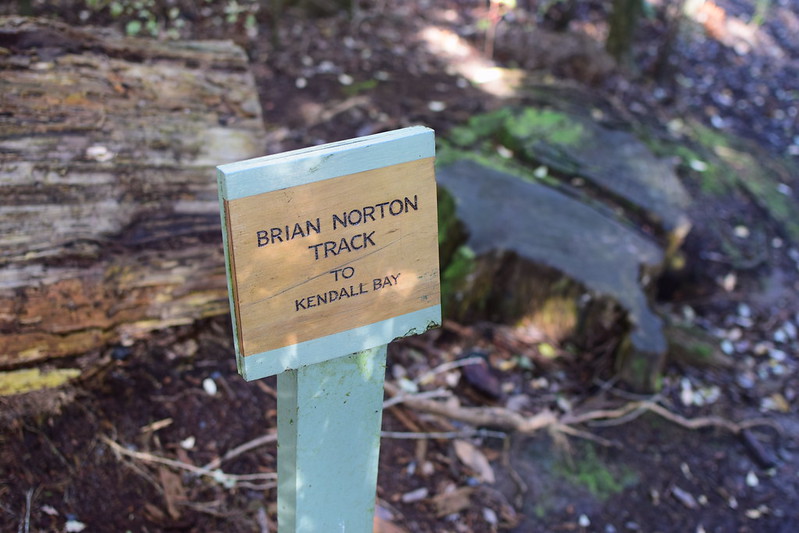 I say all this to explain why I ended up doing basically the same walk twice, once with a friend and once on my own. 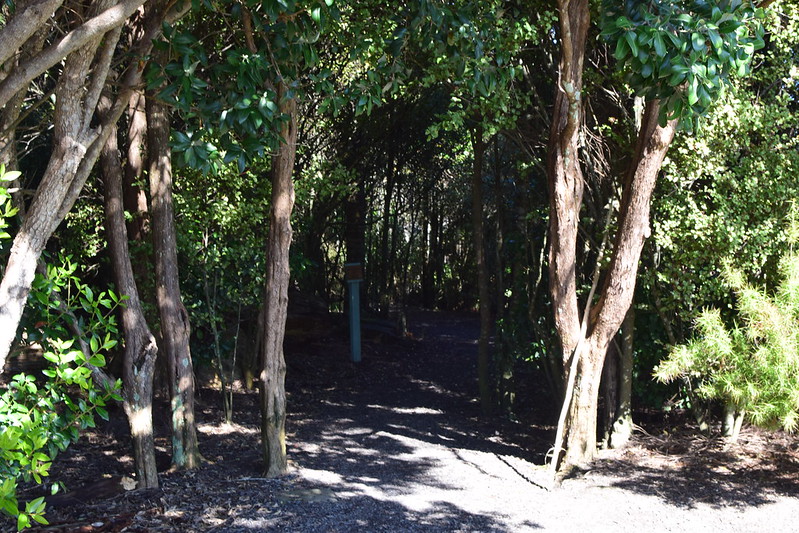 Kauri Point Centennial Park, as it is properly called, borders the Chelsea sugar refinery and contains a nice bit of forest which leads down to the shore. It’s located on the North Shore and is a good place to get views of the city as well as some nice bird shots. 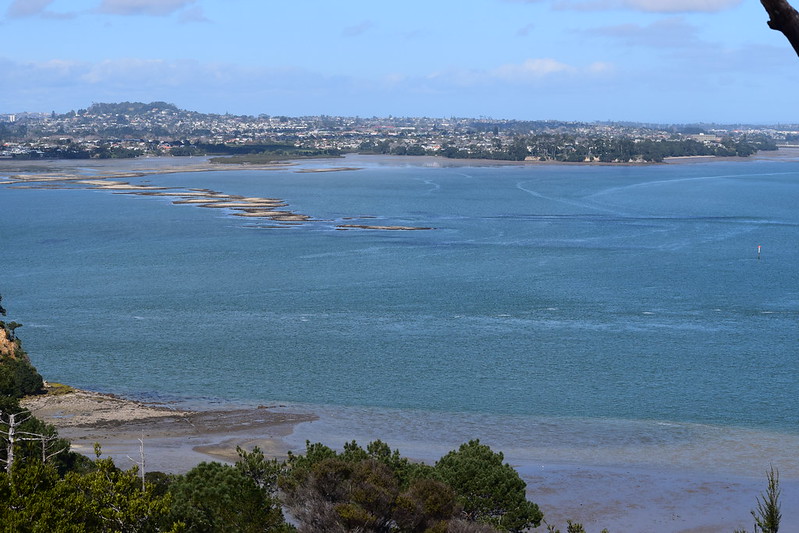 The trail runs through the forest, but the tree density is thin enough to provide a number of excellent views after really quite a small amount of walking. 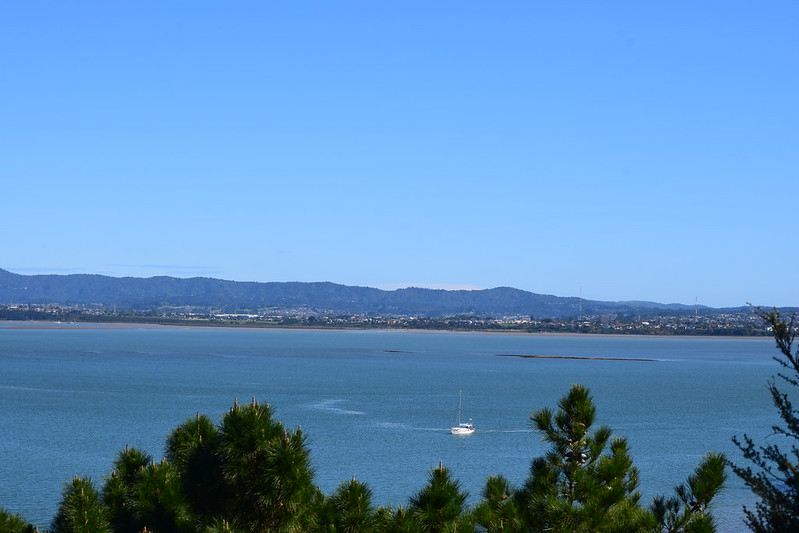 Looking out at the Te Atatu Peninsula, the Waitakere Ranges are visible in the background. 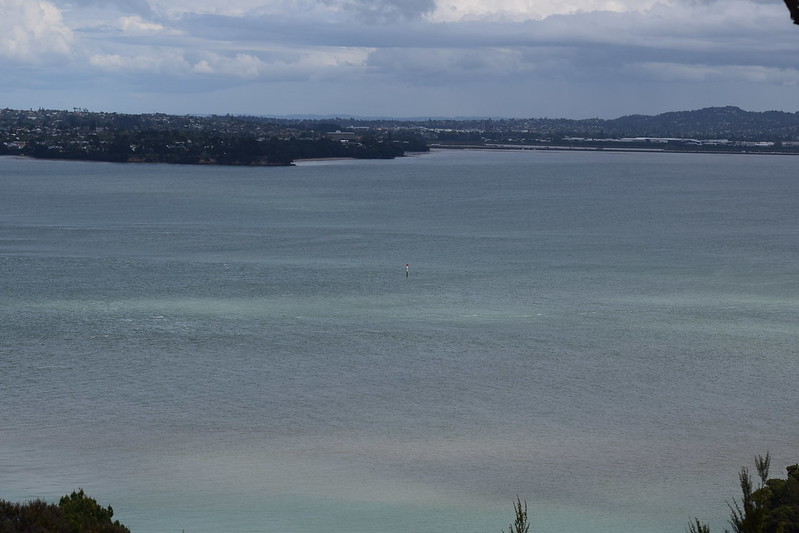 The water takes on many hues as the weather changes and the currents move. It’s almost like an aurora. 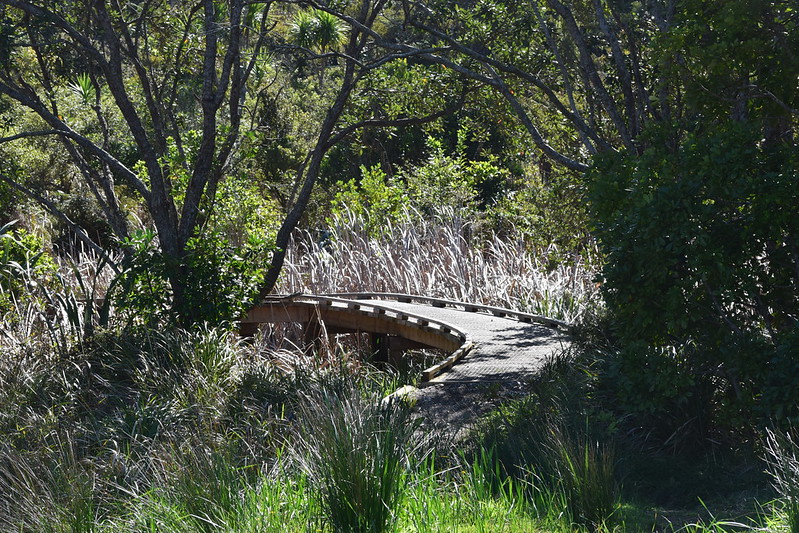 The trail does get properly muddy at places in the Winter, but the worst bits are ameliorated somewhat by the presence of boardwalks and wooden stairs. 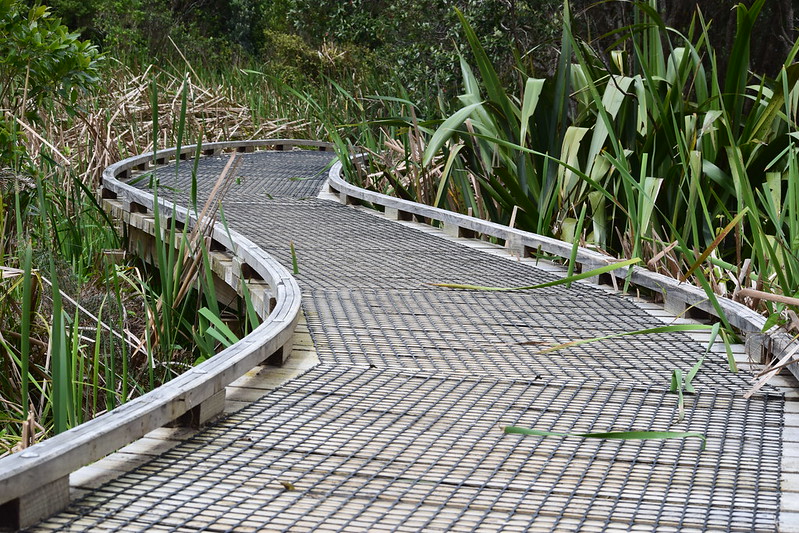 It’s possible to take the boardwalk all the way out to some swampy land, which will occasionally be visited by marsh birds and other wetlands creatures. This was not the target of my endeavors though on either trip. 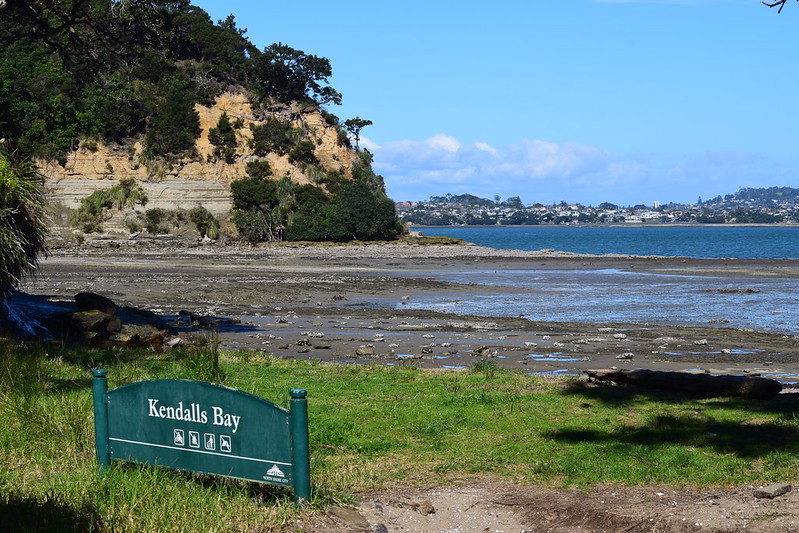 And after losing quite a bit of altitude, we wind up at Kendall Bay (the sign is a vestige of the time before nomenclature became standardized, I suppose). 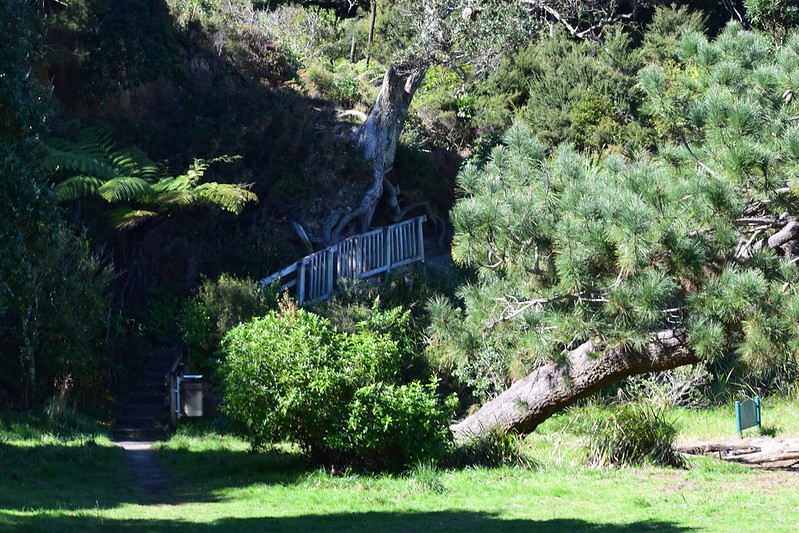 This is the path we just came down. It wasn’t a very difficult descent, but the climb back up is a little more challenging. 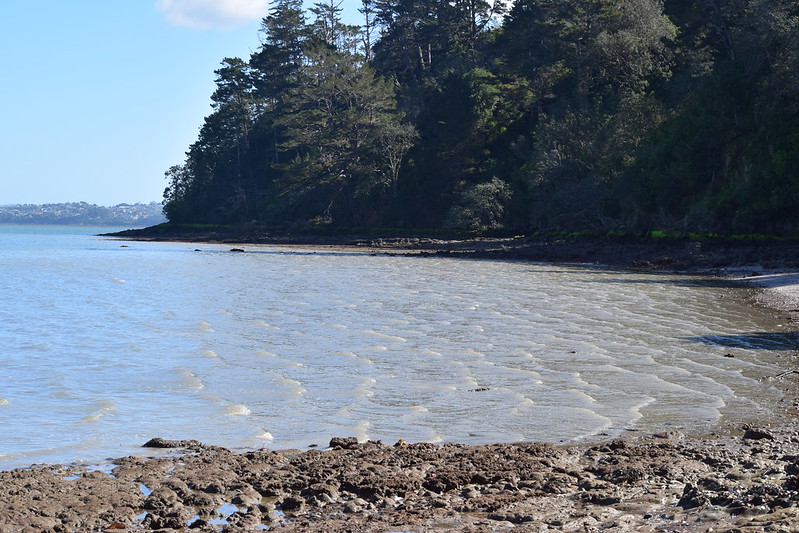 My friend and I picked our way along the rocks to the West until passage became difficult. It was a fun little bit of exploring. 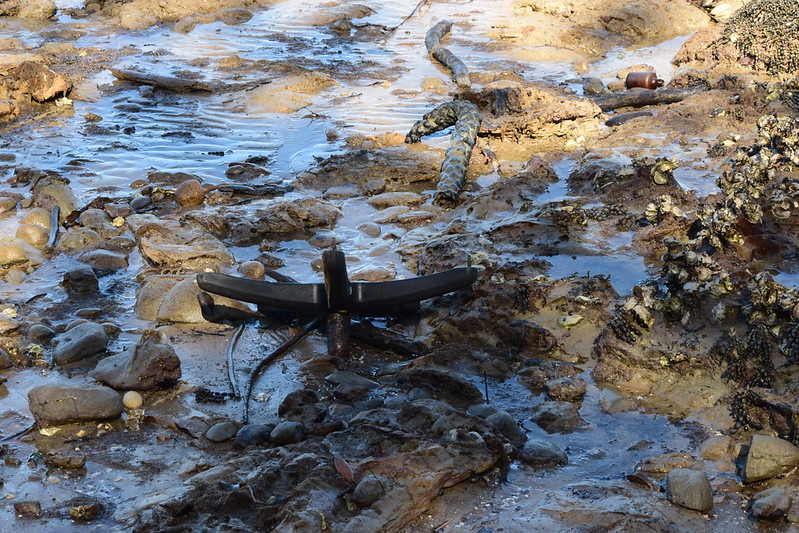 The close proximity of houses unfortunately means that sometimes residential waste winds up here in the bay. This chair base has seen better days, clearly. 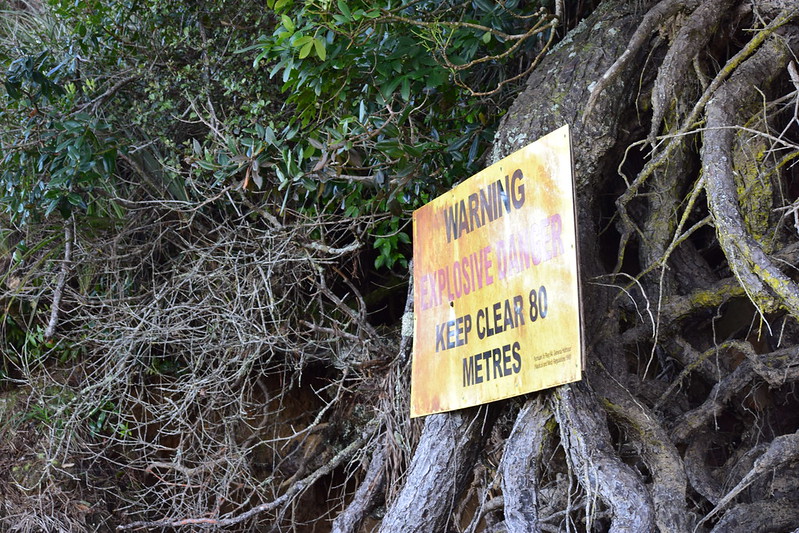 I’m not sure what this is about, either. The sign is not entirely clear of what exactly we’re meant to keep clear of, but I assume this is a rare exploding tree. We of course gave it a wide berth. 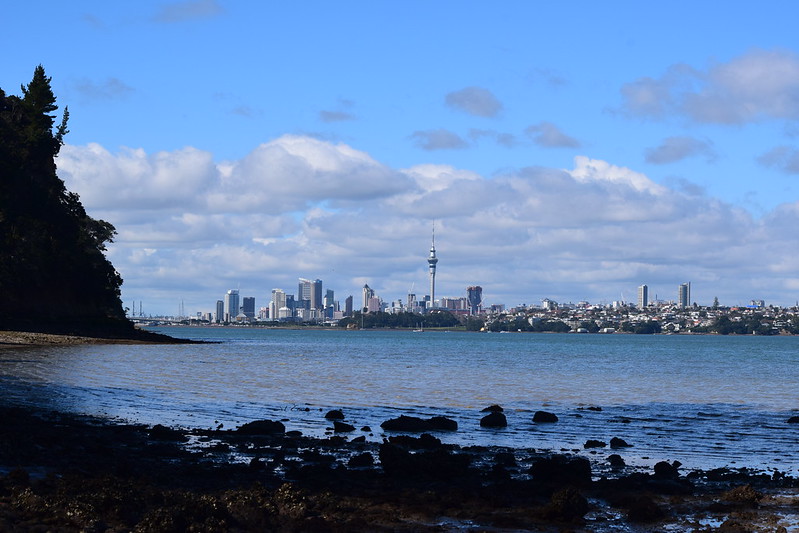 Turning the camera Eastward, the bay offers some stunning views of the city. 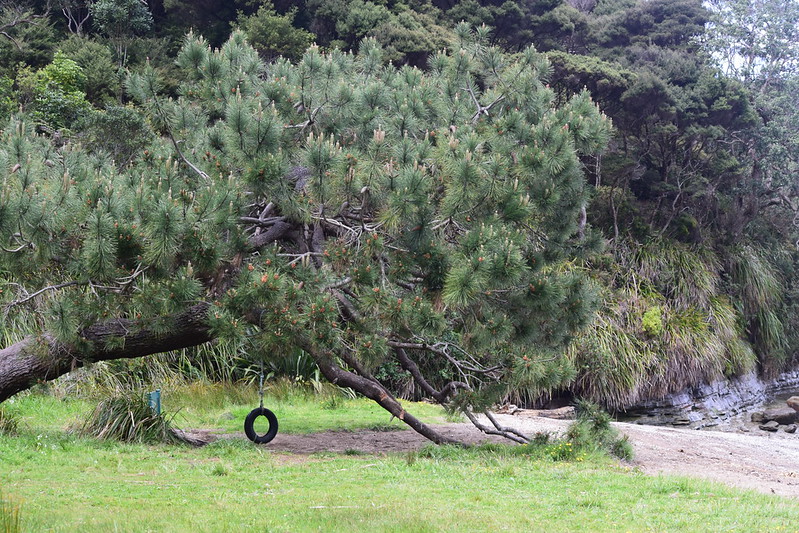 There’s also a nice little tire swing and some driftwood to sit on, as I waited for avian arrivals.

(As you probably noticed, I’m conflating the two trips into one set of pictures. All the ensuing bird photos were taken on my solo visit). 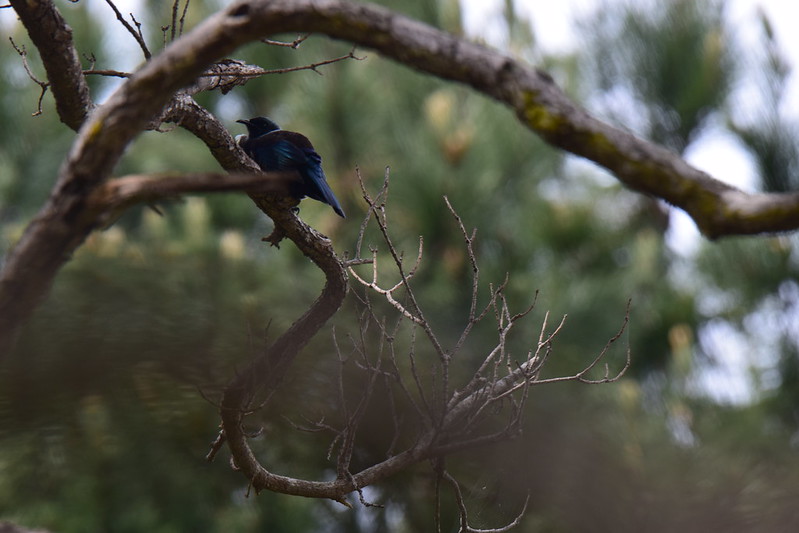 This chunky tui was not particularly interested in having his photo taken. Perhaps he was feeling fat that day and didn’t want any pictures. Don’t worry, tui, I think you’re beautiful! 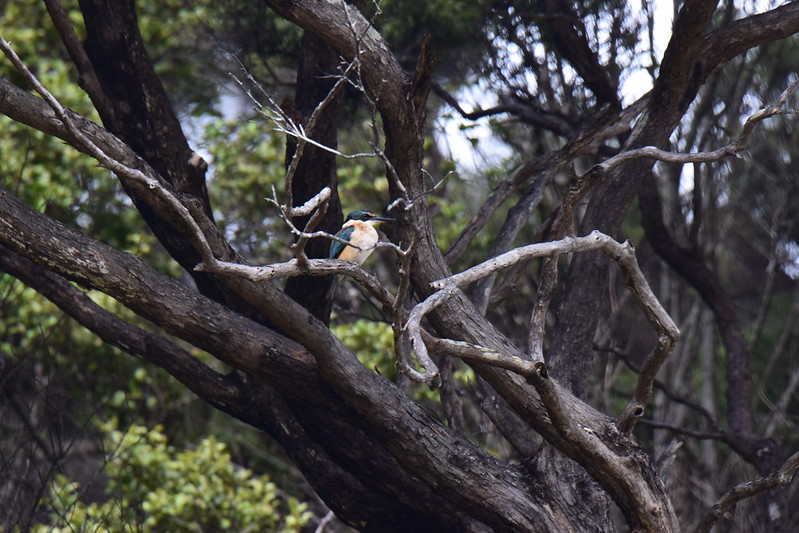 This kingfisher was much more open to being photographed, assuming some quite excellent poses. 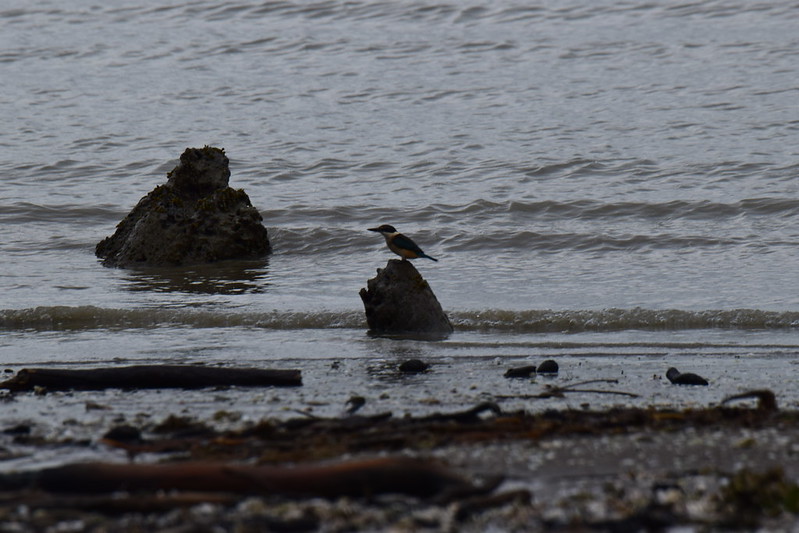 He later flew out to a rock for a change in background. I’m not quite happy with this shot, though; it’s a bit too dark. 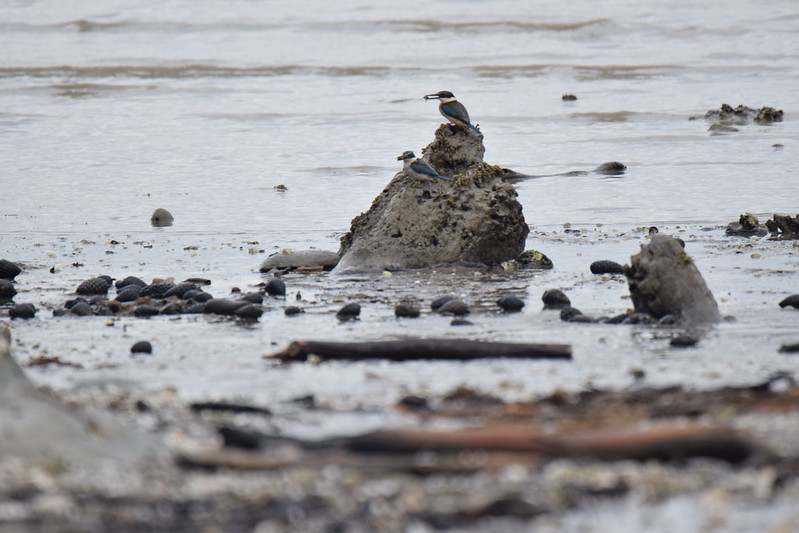 As I was dialing the aperture up, he switched rocks and a friend came to join him, munching on some food he’d found. The wider aperture lets in more light and provides a decent bokeh. 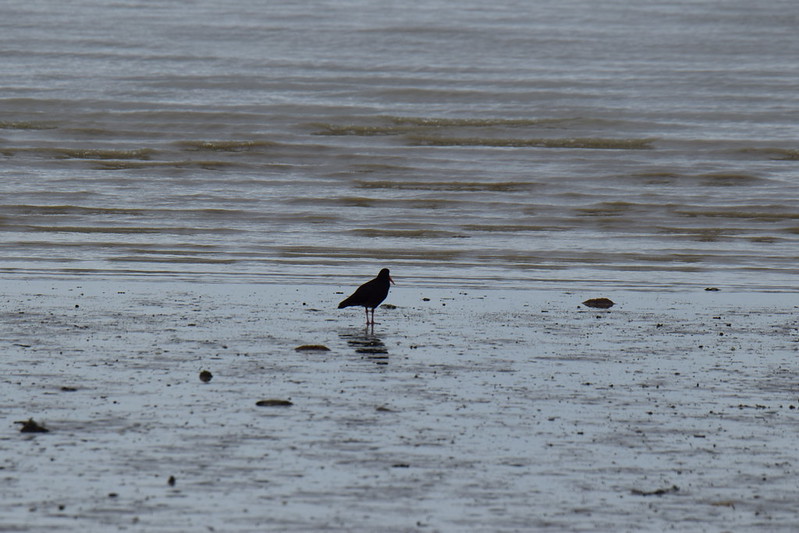 I got this unfortunately quite bad photo of a variable oystercatcher as well. Fortunately in an upcoming post I have some slightly more acceptable shots of these birds. 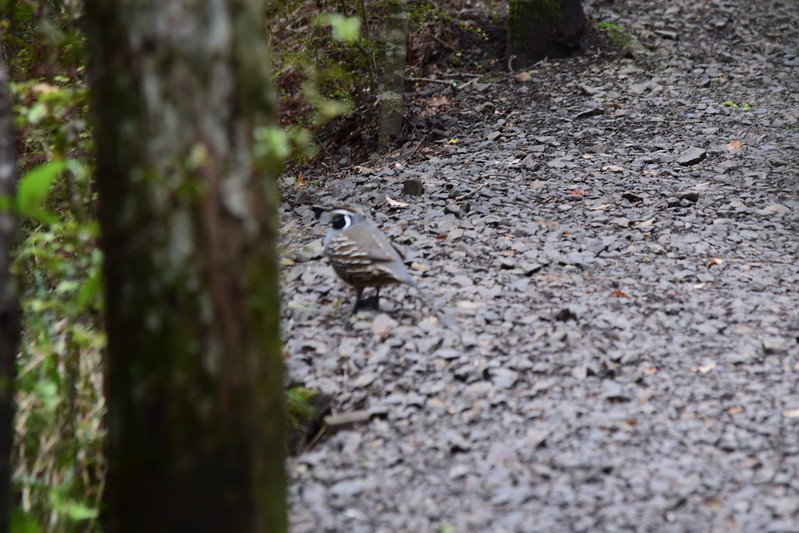 I also offer for your enjoyment this frankly embarrassing photo of what I assume is a California quail. 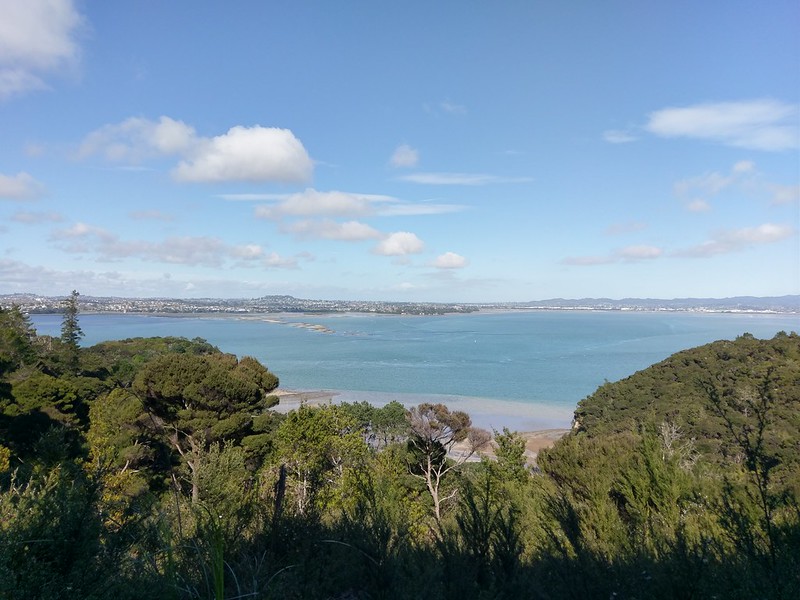 Thanks for joining me on this short trip out to Kendall Bay. Come back next time for a lovely trip out to one of my favorite spots!