The Road goes ever on and on. Late in 2017, it became apparent that my Road was leading out of New Zealand and back to the United States. This Road would lead me to many wonderful things, including that most elusive of all the phantasms crowding our hearts: love.

The joy and sadness of the Road is that glances forward may be full of promise, but glances backward deepen the sorrow of parting. It has been difficult to write the tale I am now preparing to tell you, as these backward glances have reminded me of some of the best times of my life.

I am heartened, though, by the strong belief that truly the best is yet to come. And this belief, accompanied by what my eyes have already seen to validate that belief, has heartened me sufficiently to take my metaphorical pen in hand once more and tell you the story of my last great adventure in New Zealand. 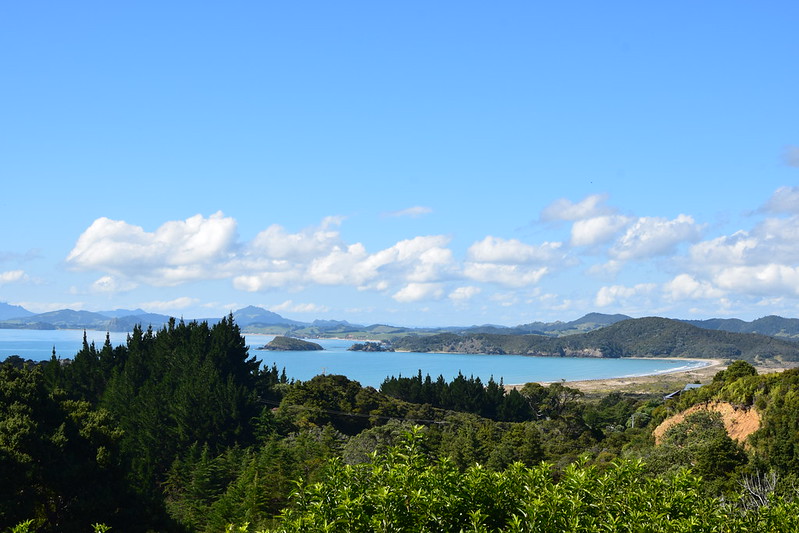 My goal was to drive North until I ran out of road at the Northernmost point of the North Island: Cape Reinga. There were adventures, planned and unplanned, both on the way up and on the way back, but for now I will tell the tale of my first stop: Matapouri. 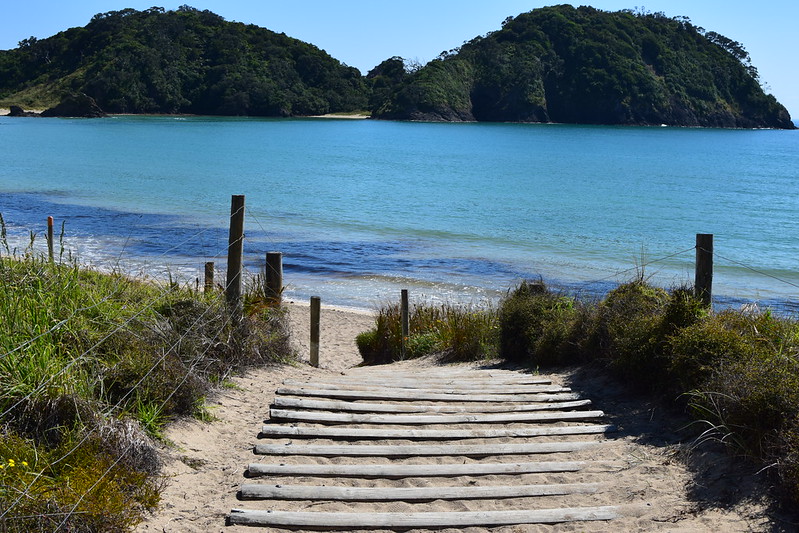 Matapouri is a beach slightly North of Whangarei, where I spent the first night of my trip. As you can see, it is a very pretty location! It’s a white sand beach with lovely warm water. There’s a decent carpark and also a convenience store if you forget your sunscreen, as I did. 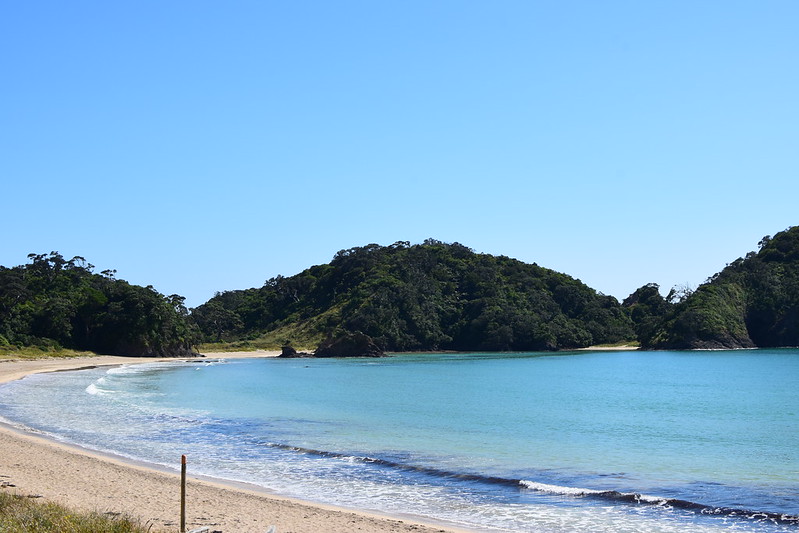 The smallish beach wraps around a cove, cleverly named Matapouri Bay. Let’s Zoom and Enhance(tm) on the far side… 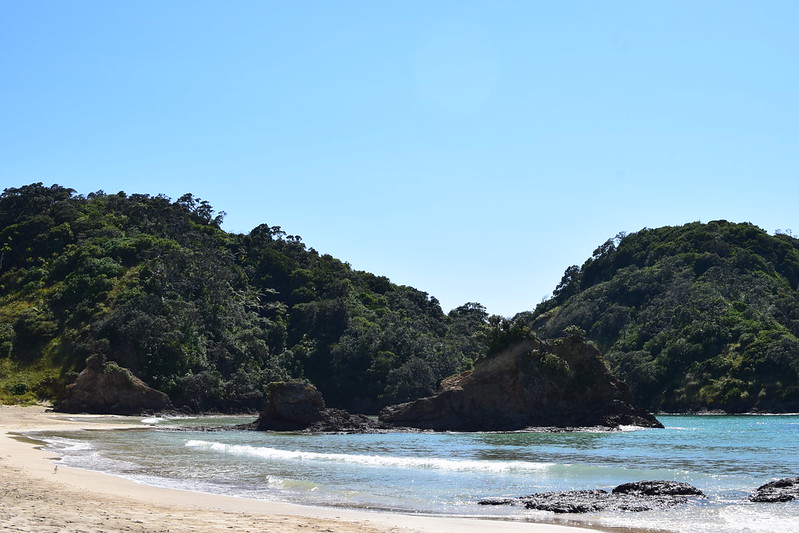 There’s a cool little semi-island there! Normally I would have made my way out there (either by swimming or picking my way along the little isthmus that connects it to the beach), but I had a different target in mind, and was running out of time! 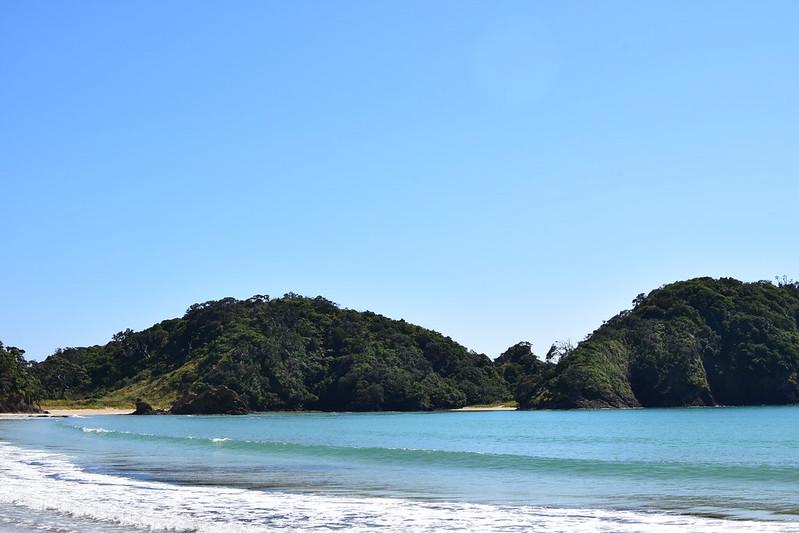 If you look across the bay, there’s another small sandy beach between the two hills. You can’t really see it from the photo, but there’s actually a walking path that runs up and over the hill starting from that beach. This path leads to the Mermaid Pools.

The Mermaid Pools are only accessible by land at low tide, which it most definitively was not when I arrived. And the tide was coming in, so the path was becoming more and more submerged by the minute. I decided I was very much interested in seeing the pools anyway, so I made my way around the beach as far as I could. 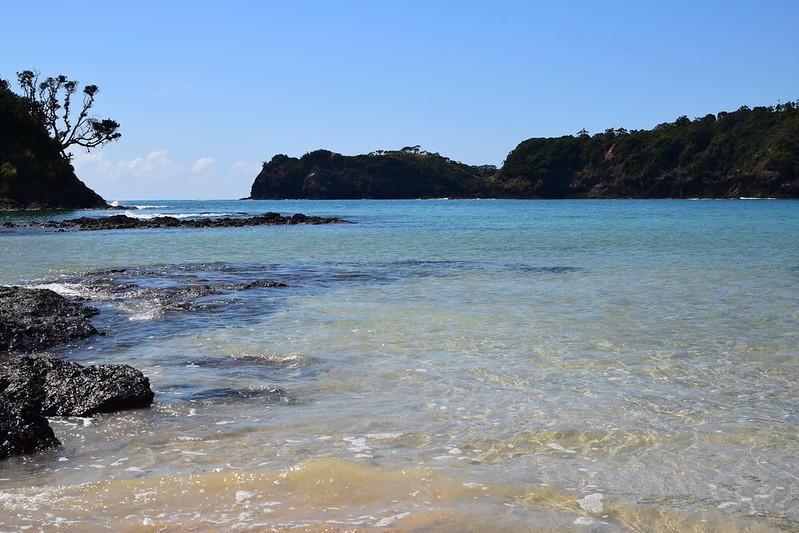 After struggling through a very gross area full of rotting seaweed, I finally arrived at the point in the photo above, where I could no longer walk. My options were swimming out into the bay around the rocks and then back in to the beach or climbing along the rocks.

Unfortunately, I had not made the wisest choice and had a) not changed into my swimsuit and b) brought all my stuff with me in my pockets. So I did what I would never be able to do in America and emptied my pockets (including my cell phone and car key) onto a (hopefully) secluded rock, one high enough up that it wouldn’t be submerged by the incoming tide. And then, holding my camera above my head, I waded in to climb on the rocks and wade through the water. 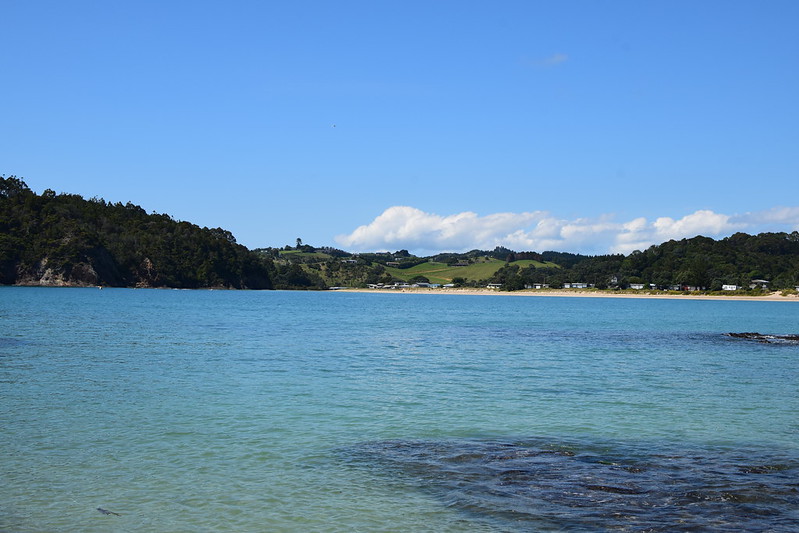 Eventually, I did make it to the beach! I did horribly scrape my leg at one point where I slipped and my shin hit a rock. One year later, the scar is still (barely) visible. But I did make it, camera intact — as this photo of the beach that I started from does demonstrate! 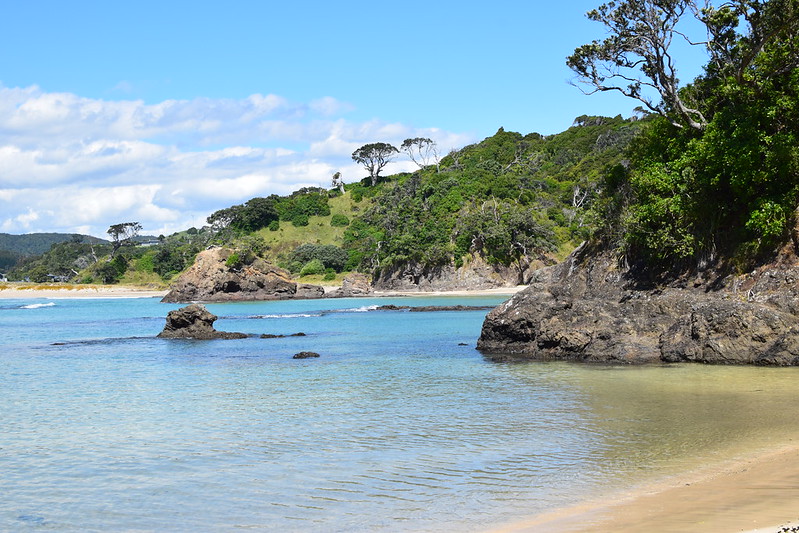 This is the photo of how I got over there: climbing up and around these rocks. Somewhere on the other side of that outcropping are my keys, phone, and wallet. 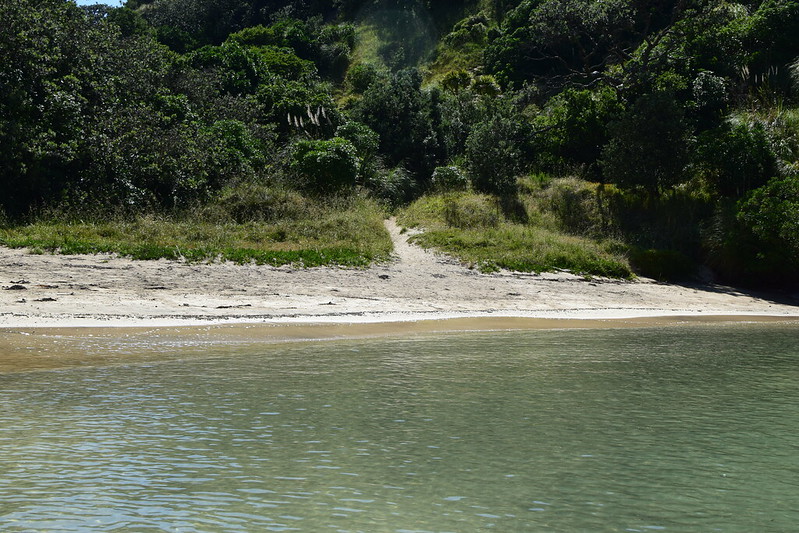 And this is my goal: this path going straight up the hill!

NOTE: Please see the important update at the end of this post for the latest on this trail! 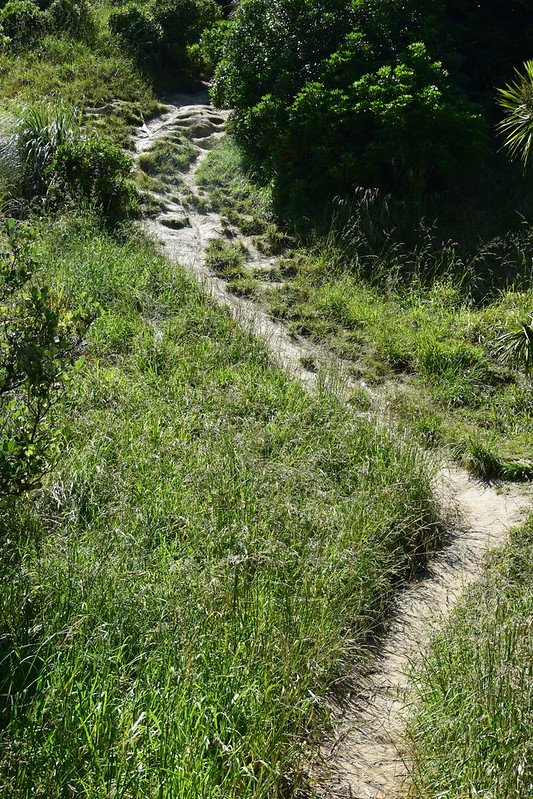 I’m making this trip in late November, so it’s still Spring in New Zealand. By the end of Summer I’m sure this path will be well-cleared by the feet of a thousand tourists. But for right now, it’s looking a bit overgrown. 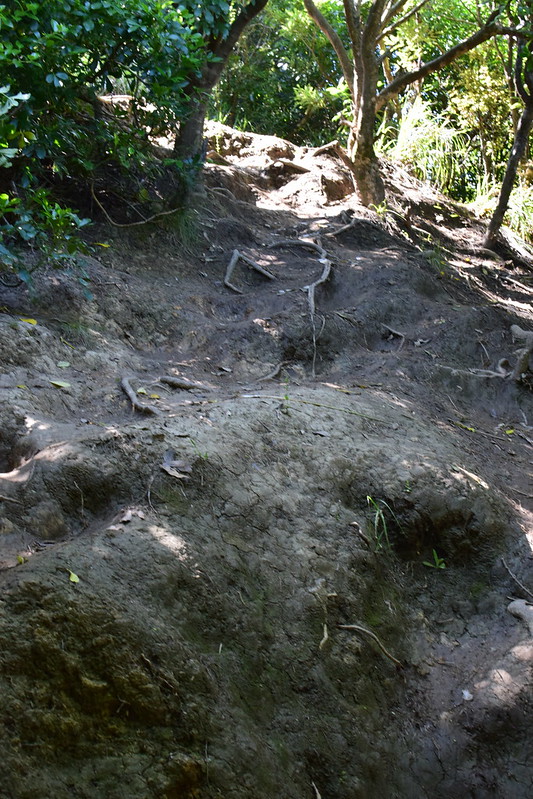 Of those thousand tourists, a few may well turn back here. The path becomes little more than a free climb up a steep dirt and mud embankment. 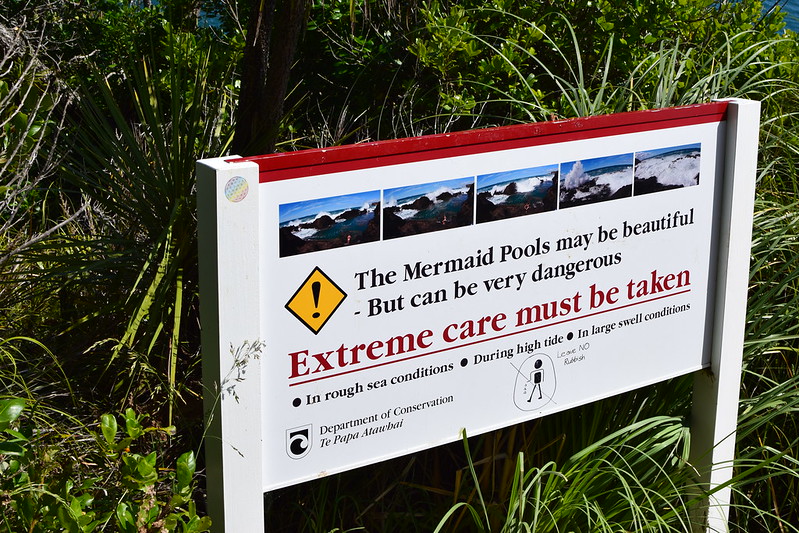 Before reaching the pools, there’s a sign telling visitors to be very careful. The photos along the top are a very amusing series of images depicting a tourist surprised by a large wave and fleeing before his vantage point is completely flooded.

In case you think this sign is overly cautious, a quick search for “mermaid pools NZ” will produce plenty of articles and blog posts about people who got themselves into quite a bit of trouble. It’s very worth being careful. 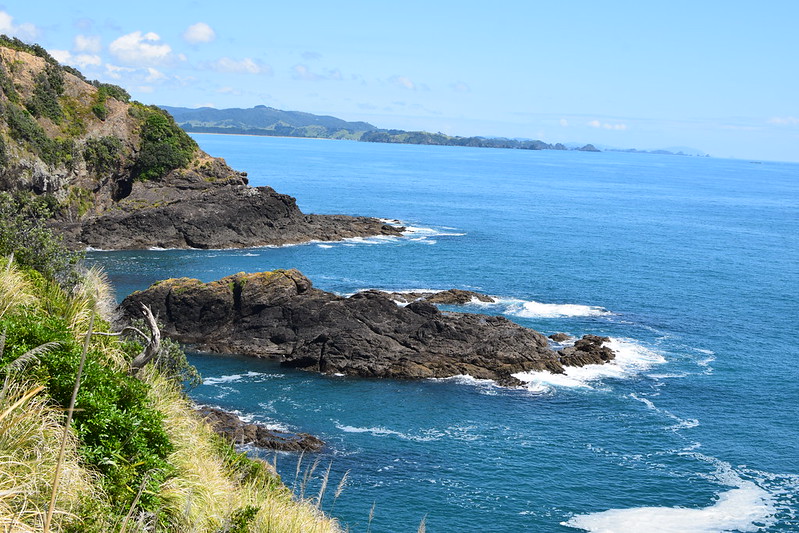 As I crested the top of the hill, I could see why people made the trek and braved the ocean’s wrath. This is a very beautiful spot! 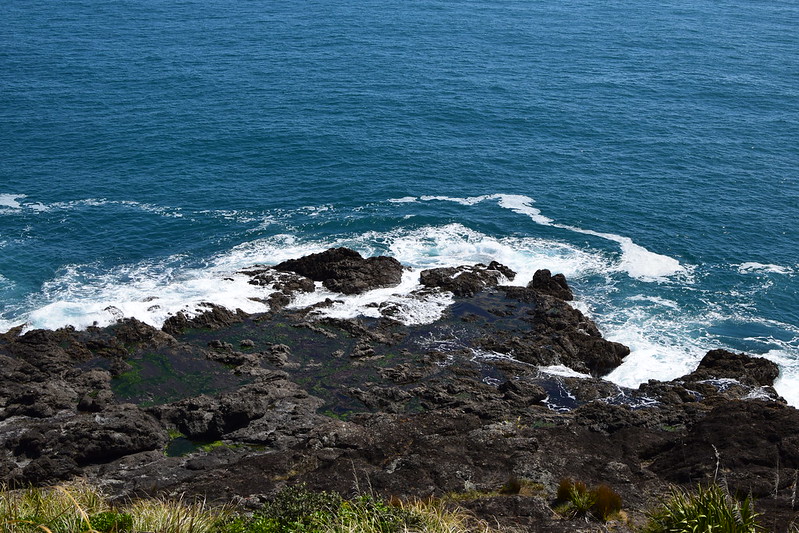 From the top, you can barely see the eponymous pools.

Amusing side note: upon arriving at the pools, I encountered a couple who had gotten there before me. They seemed somewhat annoyed to discover that someone had braved the high tide and come to visit the pools. I think they had come over at low tide and hoped to have the place to themselves. Sorry, folks! I at least tried to do them the courtesy of keeping them out of my shots. 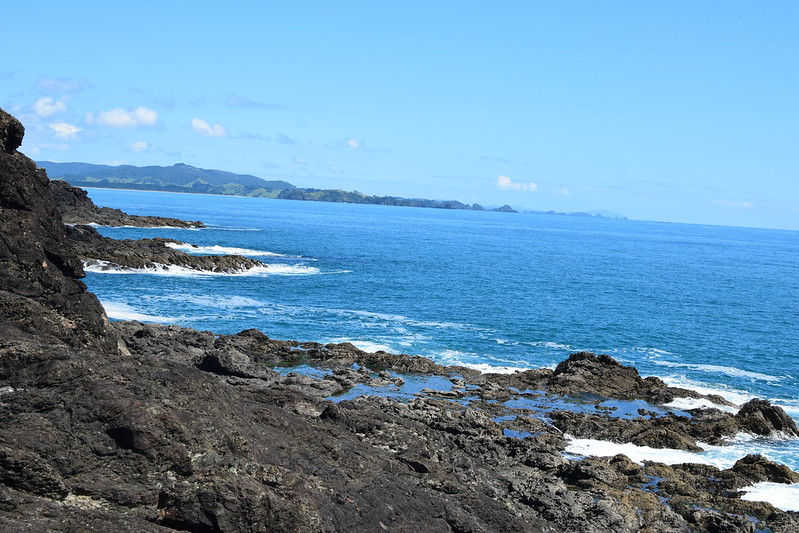 Climbing down near to sea level, you can see some more small tide pools. But it’s not these that give the place its name. 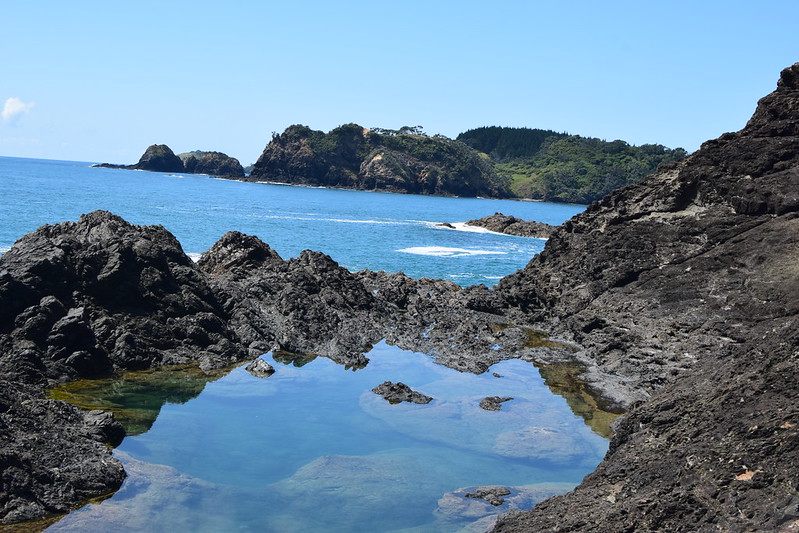 No, the Mermaid Pools are quite large; this one is bigger than a bathtub. I was able to fit my whole body in it and lounge around quite comfortably. 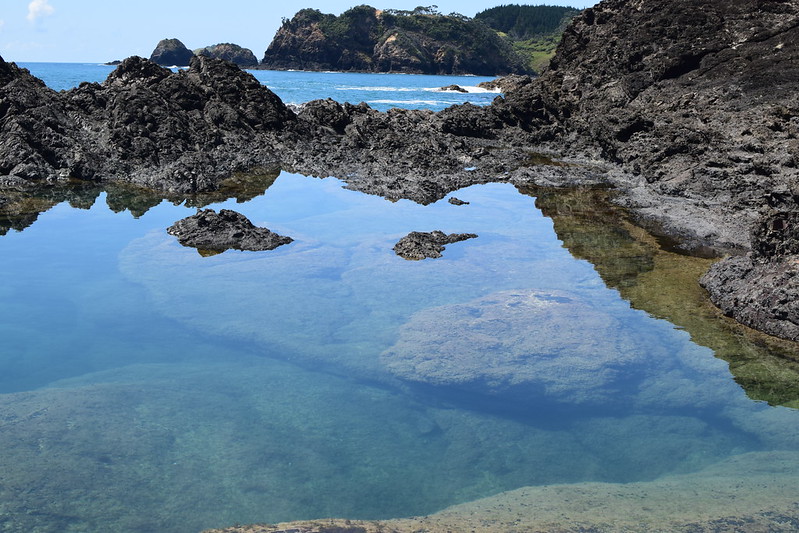 Here’s a slightly closer-up shot to show how clear the water is! I do confess I got some of my blood in the pool as I soaked my wounded leg. The salt water did help the cut a bit!

(Photography note: the only lens I had with me was my 35mm, since I didn’t bring the whole camera bag for hopefully obvious reasons. Any “zoomed in” shot is from me moving the camera closer!) 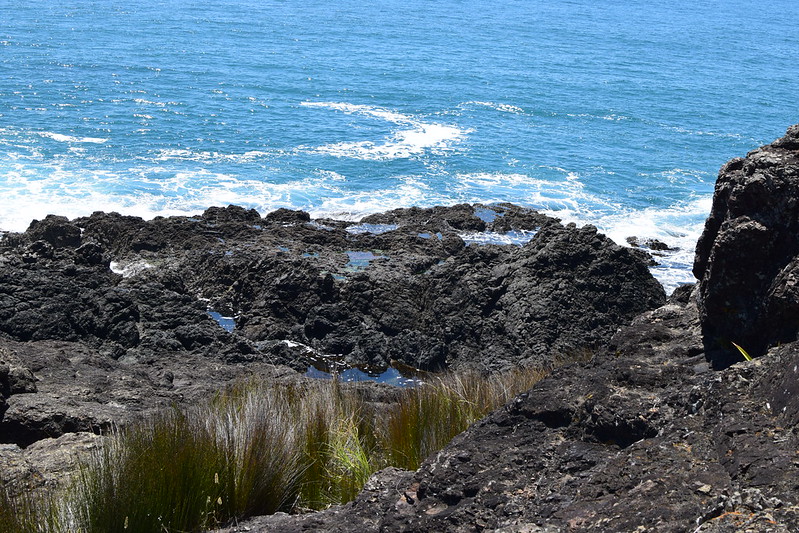 As I bade the pools (and the couple, who were now pointedly ignoring me) farewell, I encountered a group of young German tourists coming down to the pools. I felt less bad about disrupting the couple’s alone time, as they were about to be disrupted anyway. I also felt slightly less adventurous making the trip over to the pools at high tide, though they were suitably impressed that I had gotten my DSLR camera over with me. 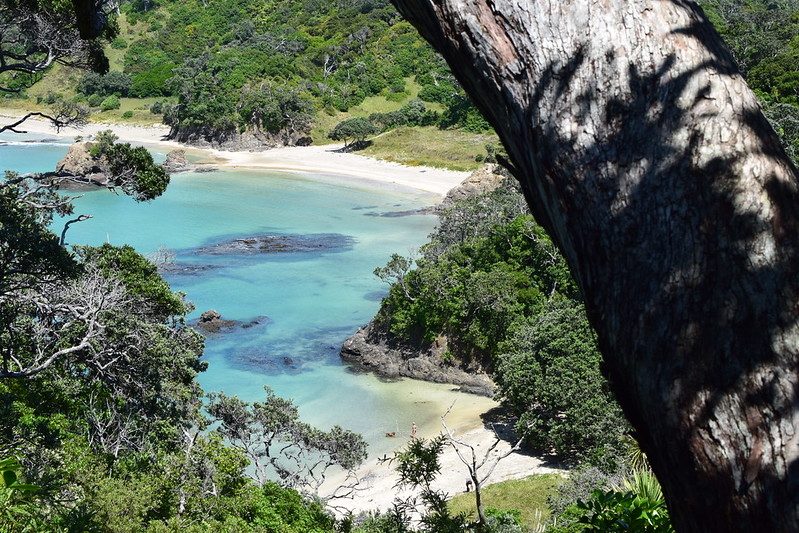 Upon reaching the summit of the hill again, I got this great shot of Matapouri Bay and the little beach. I also noted that a woman and her dog had both made the trek, fully deflating any Great Intrepid Adventurer thoughts I was still harboring. 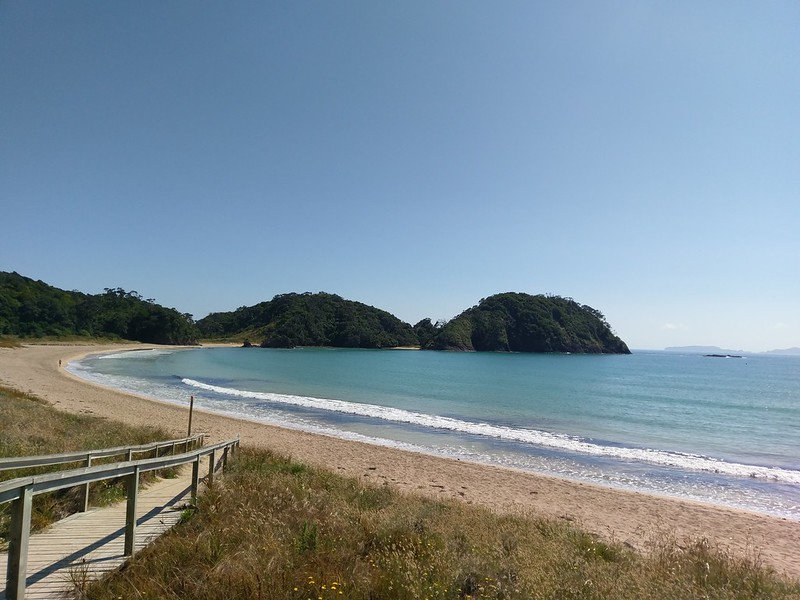 My journey back to the main beach was uneventful (and yes, all my stuff was exactly where I had left it). I did a bit more swimming, walked basically the full length of the beach in the other direction, and took a few more photos, but it was mostly relaxing stuff rather than bold adventuring. 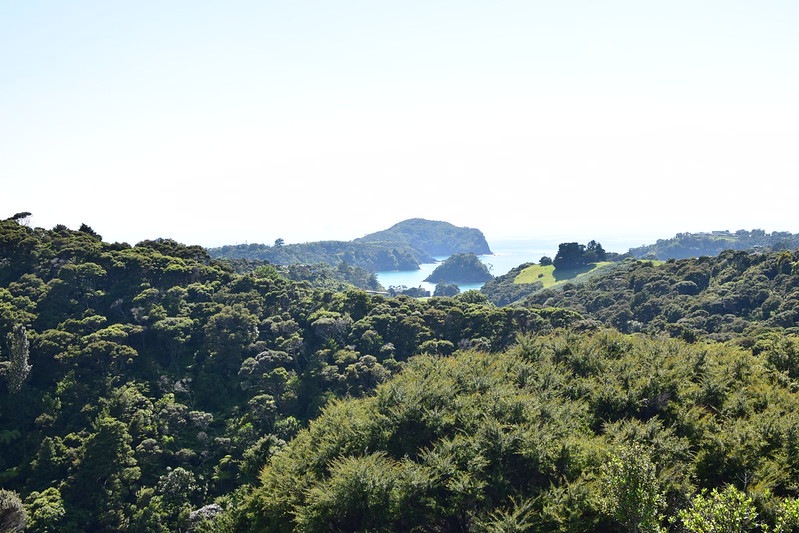 Overall, the first day of my farewell tour had been a resounding success! I greatly enjoyed Matapouri and was glad I made the effort to see the Mermaid Pools. I drove back to Whangarei fully satisfied and spent the first night of my journey both happy with what I had already done and very excited about what lay ahead of me!

Tune in next time for part 2! More adventure awaits!

Important edit: Alert reader Dawn sent me an article explaining the history of the trails to the Mermaid Pools. Apparently the official trail fell into complete disrepair in 2010, and the trail I document here is actually an unofficial trail that goes over the top of the Rangitapu Pa.

Due to the danger of the trail both to hikers and also to the nature reserve and the Pa, the local tribe and the New Zealand Department of Conservation have issued a protective edict closing the walkway.

My journey was made before the walkway was closed, but had I known that the unofficial path was controversial I would have elected to not make the Mermaid Pools a part of my trip.

Ideally the DOC find a way to re-open the pools to the public, but until and unless that happens I strongly encourage all my readers to be respectful of this ancient land and the need to protect it. Be excellent, my friends, and journey well!