Thanks for joining me on my Northlands adventure! If you’re new here, I recommend you start at part 1 first so you know what’s going on. Or not! I’m not here to tell you what to do.

After spending the night in Paihia, I embarked on the next leg of my journey: driving North until I run out of road. Although actually said trip North began by driving South! My intention was to join the Highway 1 at Pakaraka, slightly Southwest of Paihia, and then head Northwest along 1 until hitting Cape Reinga. And although I could have cut directly over on the B roads, I had experienced enough twisty turny roads for a while and wanted to stay on the main motorways. 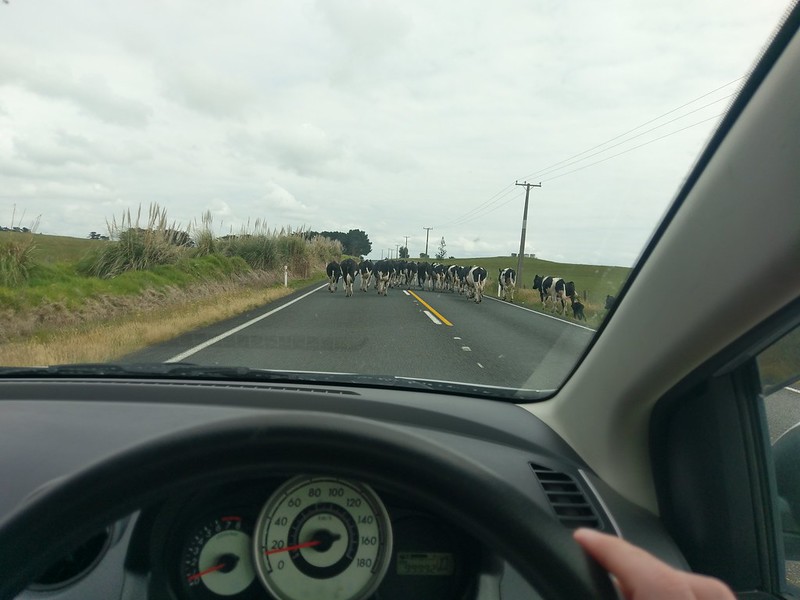 Of course, even on the motorway sometimes you run into traffic.

The drive up to Cape Reinga is actually not too bad. It’s mostly farmland, of course, but there’s the occasional interesting view or quaint little town. One does have to take some care to manage petrol correctly, as filling stations (or signs of civilization in general) can be few and far between!

After about three hours of driving, depending on how many herds of cattle you have to slow down for, you get to the Northernmost point of the North Island! 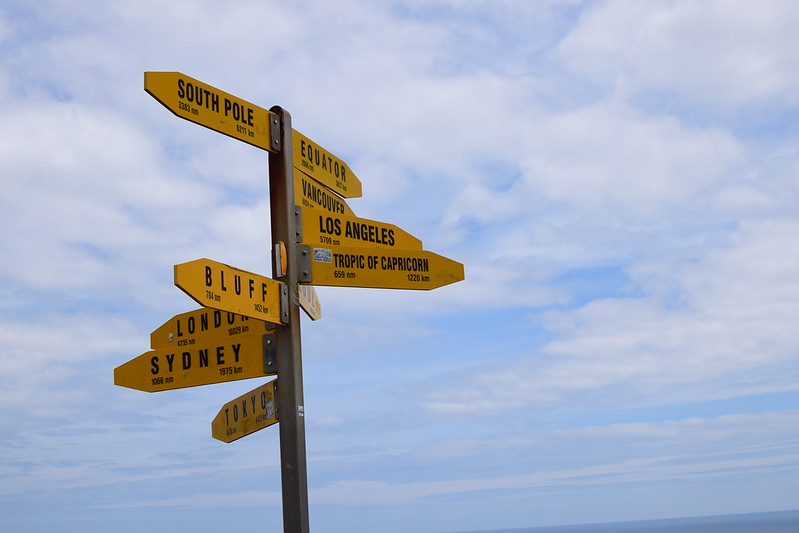 Cape Reinga is, to be honest, full of tourists at nearly all times. Several busloads came and went while I was there. It’s a pretty neat little place, but it’s so overrun. And this wasn’t even at peak tourist season! I can’t imagine what it’s like in January and February.

It’s also full of photo ops, such as the above signpost (which is the subject of a much deeper discussion I get into here). 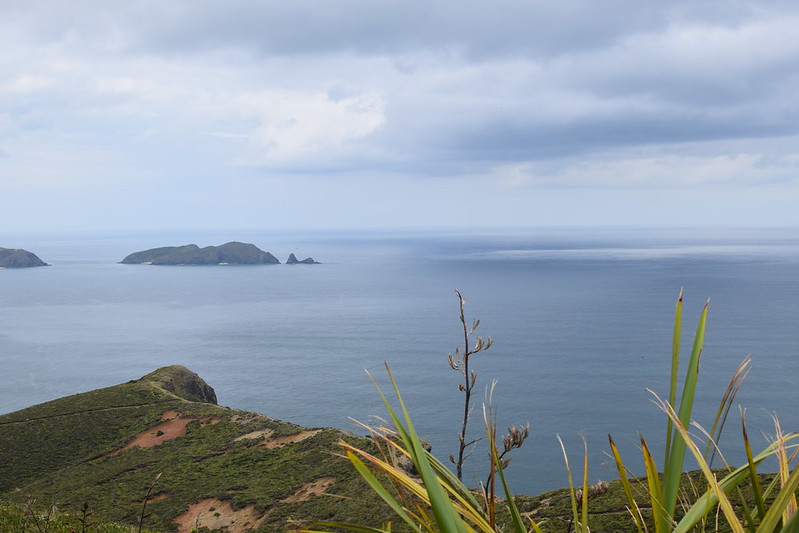 Despite its tourist-filled nature, however, Cape Reinga is mostly walking trails. There’s some well-paved tracks, but a lot of the cooler views are footpaths like this one. 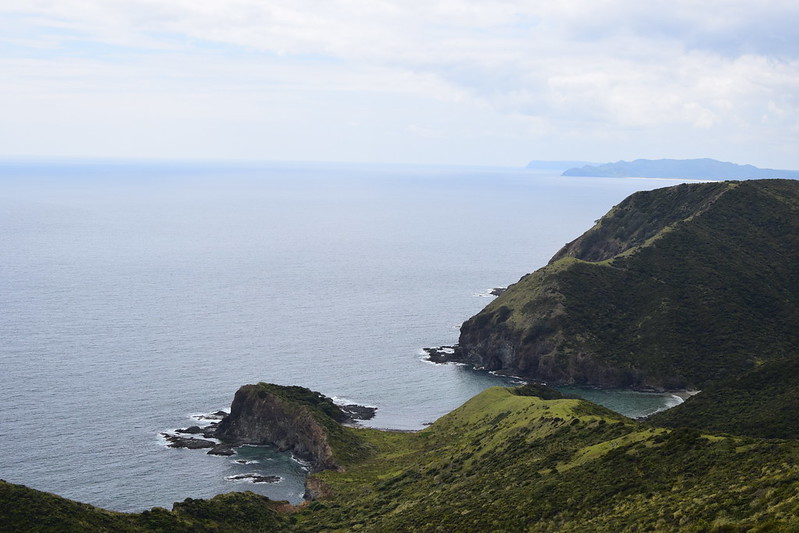 There are some amazing views to be had just from the carpark and the paved areas, however. I spent most of my time here looking contemplatively out to sea. 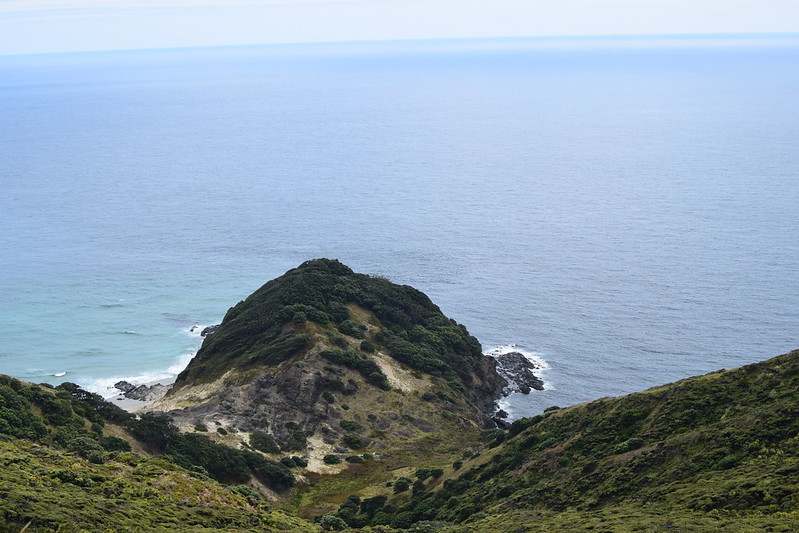 If you were to sail due North from this point, you might run into some small islands just North of the Equator, such as Butaritari or Bikati, which belong to the Republic of Kiribati; a country that is totally real even if it sounds like I just made it up. But if you happened to miss those, you would run into Attu Island, the Westernmost piece of land in America (despite currently being uninhabited and generally being a barren wasteland, Attu Island has a fascinating if brief history and in addition to being geographically distinctive is also the site of the only WWII land battle on United States soil).

I, however, did not make this journey. 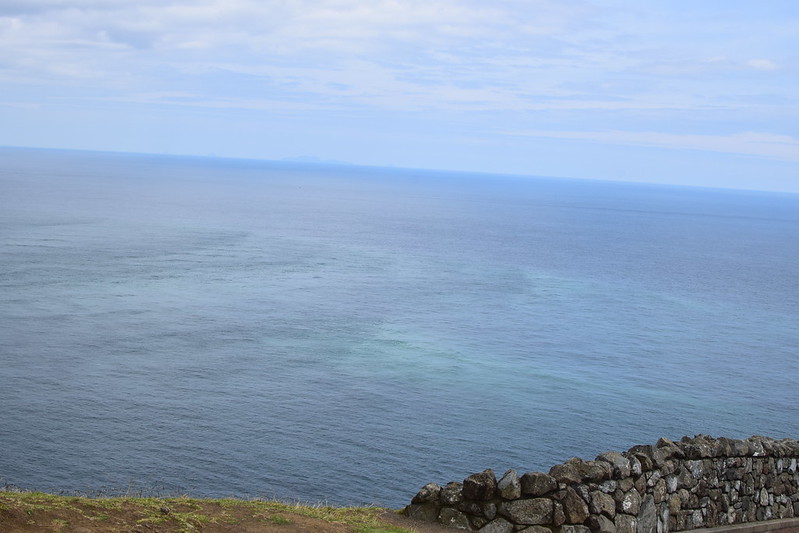 The waters of the Tasman Sea meet those of the Pacific Ocean here at Cape Reinga. This location is sacred to the Maori people, and it’s not hard to see why. Even on a chilly and somewhat overcast day, the water is gorgeous and almost luminescent. 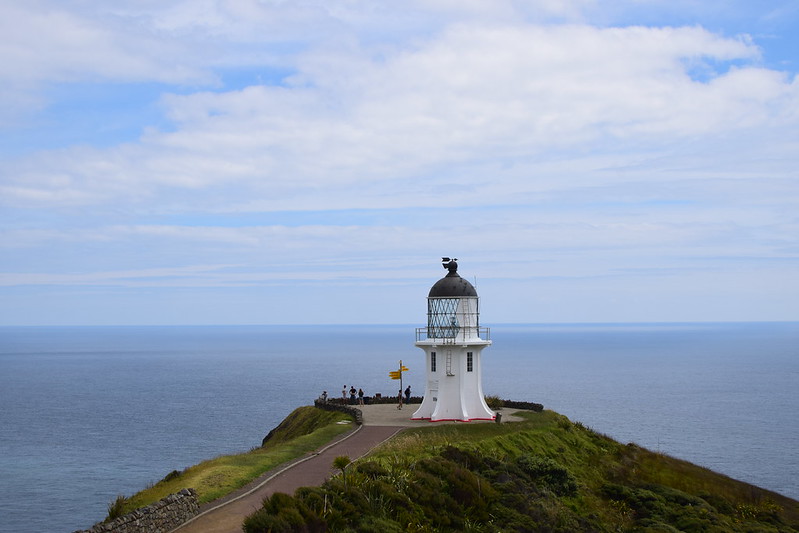 Perhaps equally as famous as the signpost is the Cape Reinga lighthouse. It’s an easy, well-paved walk over to its base (where the signpost itself is), and lighthouses are unarguably very cool. 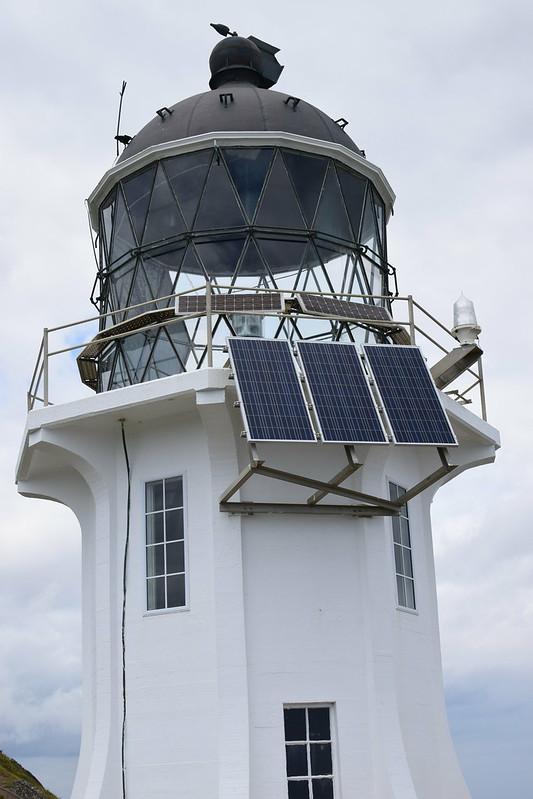 This particular lighthouse is automated and self-sufficient. Though it is a tourist attraction, it’s not just for show either. Its flashes can be seen 35 kilometers (nearly 22 miles) away, and it is operated by Maritime New Zealand as part of their network of lighthouses keeping ships safe. 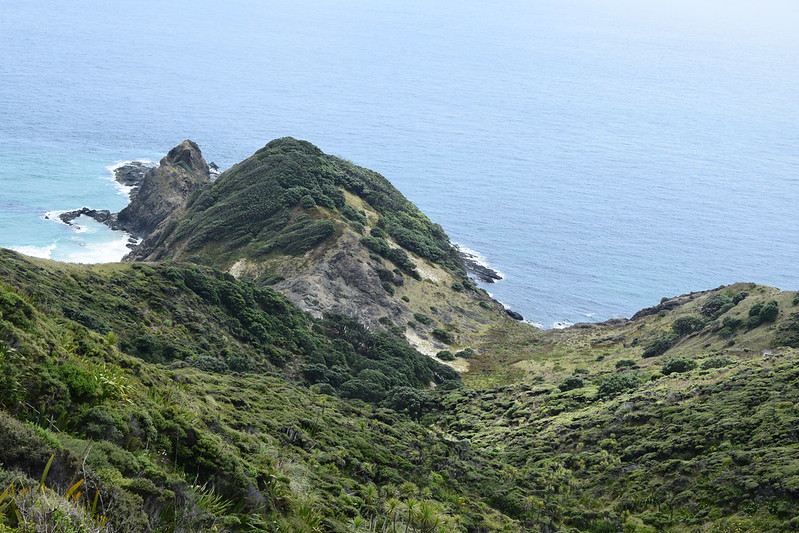 You might expect me to have walked some of the trails and tried to access some of the more remote parts of Cape Reinga, but to be honest the cold weather plus the mass of tourists dissuaded me. Instead, I decided to go somewhere different. 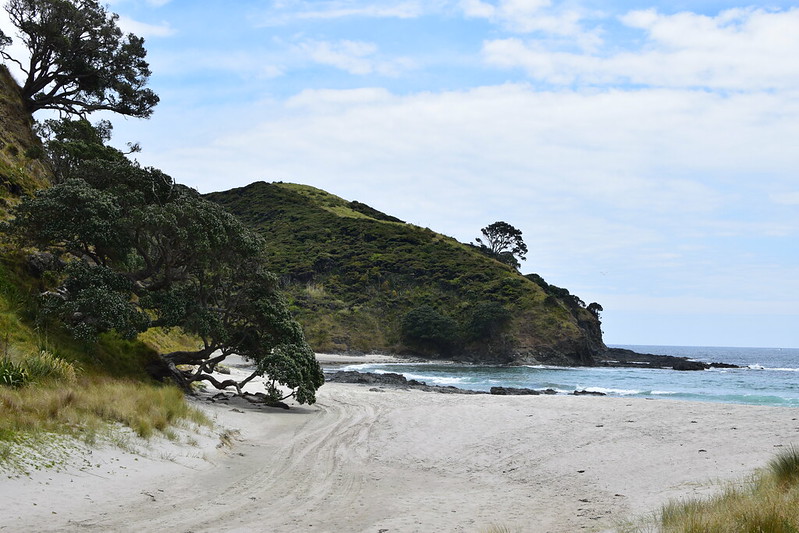 If you head back down the motorway from Cape Reinga and turn off at your first opportunity, you will find the beachy haven of Tapotupotu. 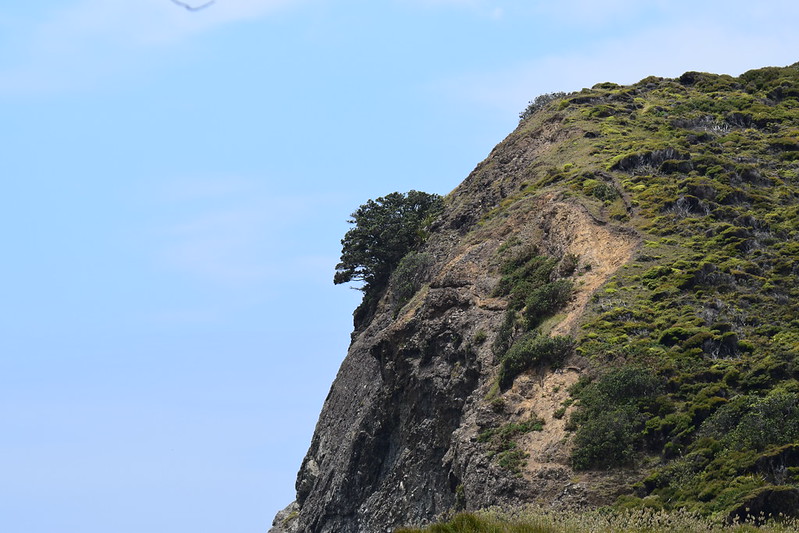 This small reserve and camping area is right at sea level, so it involves losing a decent amount of elevation from up on the Cape. Compared to tourist central up above, though, this little spot is relatively quiet. 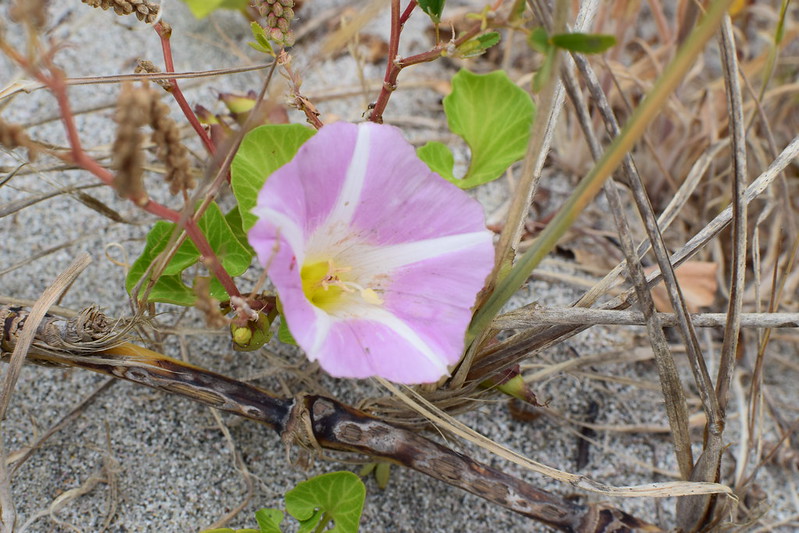 I could feel myself de-stressing almost immediately. I took the time to breathe, sit down, relax, and photograph the flowers :) 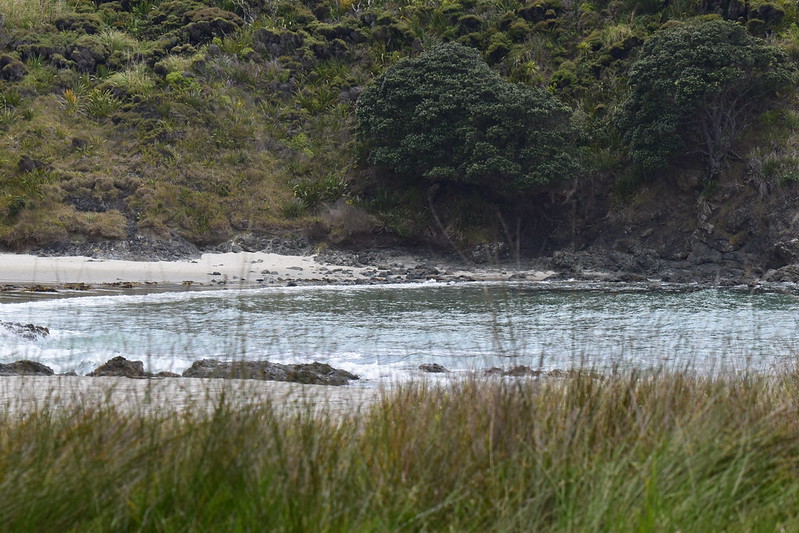 It’s not the most beautiful views of New Zealand, or even of this general area, but it has its own relaxing charm. Probably on a different day I would not give Tapotupotu a second look, but right then it’s exactly what I needed! 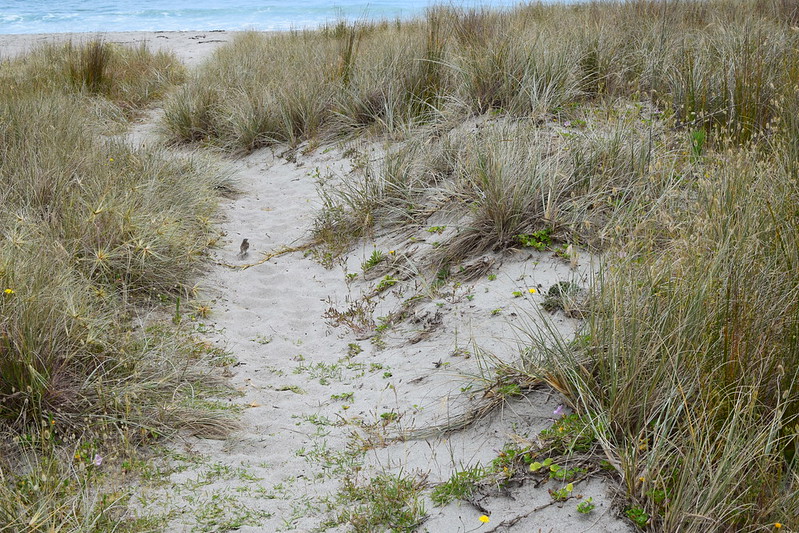 On this path to the beach, I noticed the small sparrow sitting on the path. I decided to sit down at a park bench and see what birds might land near me. 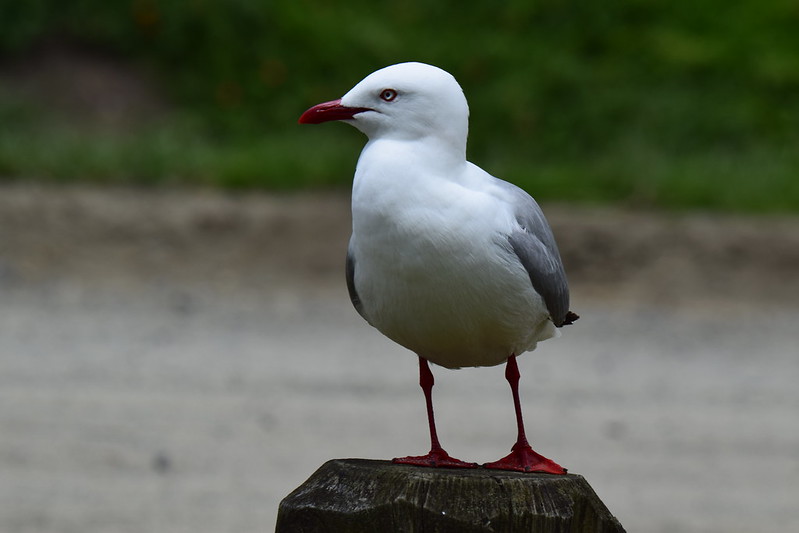 Nigh-immediately, this seagull plopped down close enough that I didn’t even need the big lens! Seagulls are loud and annoying and a bit gross, but they do have a certain appeal. Perhaps only because of what they signify: the proximity of the coast! 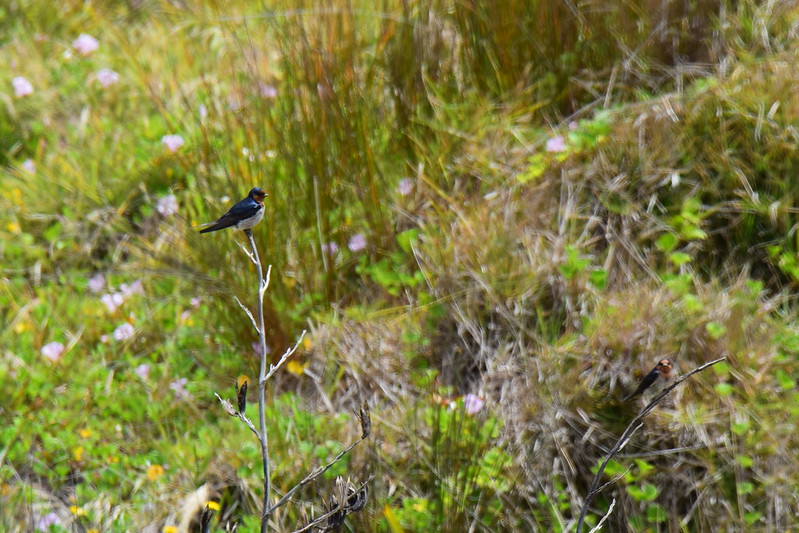 As I’m sitting and musing, a couple of these fine fellows alit on a branch.

I haven’t photographed one of these birds before, so let’s Zoom and Enhance(tm)! 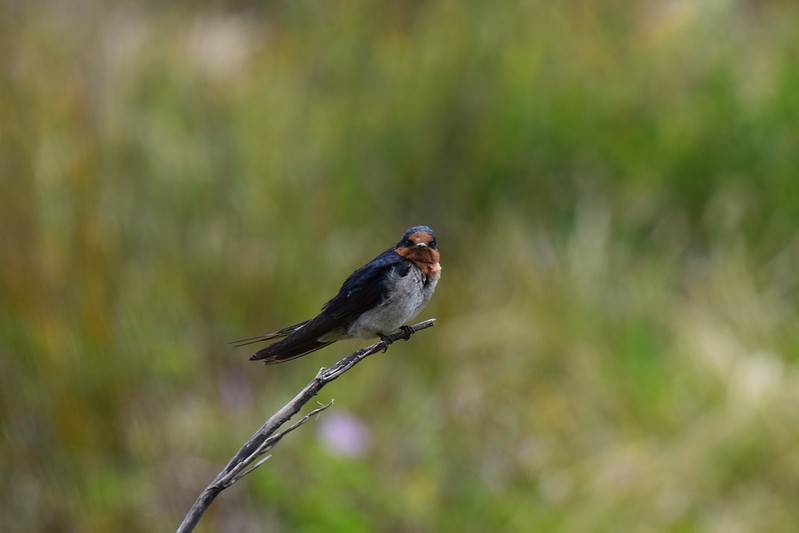 Why, it’s a welcome swallow! These are native to Australia and surrounding islands. 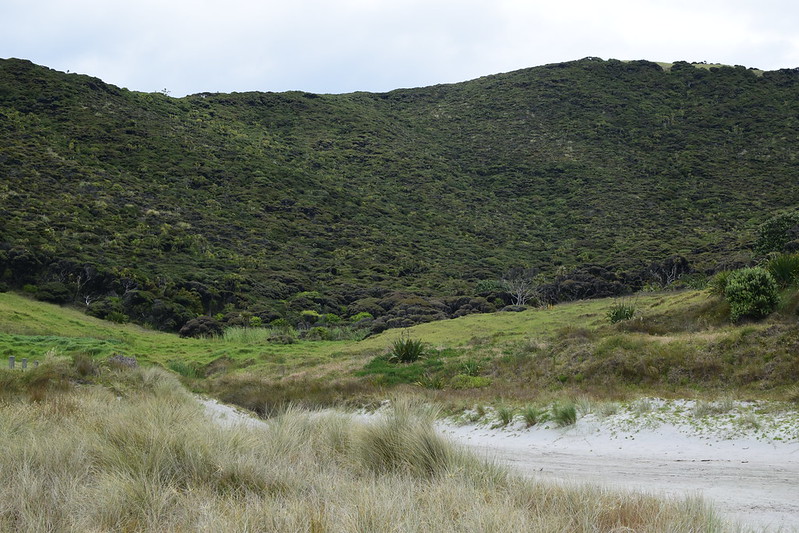 I still have a ways to drive before my day is up. I found myself surprisingly reluctant to head back up these hills and back down South. 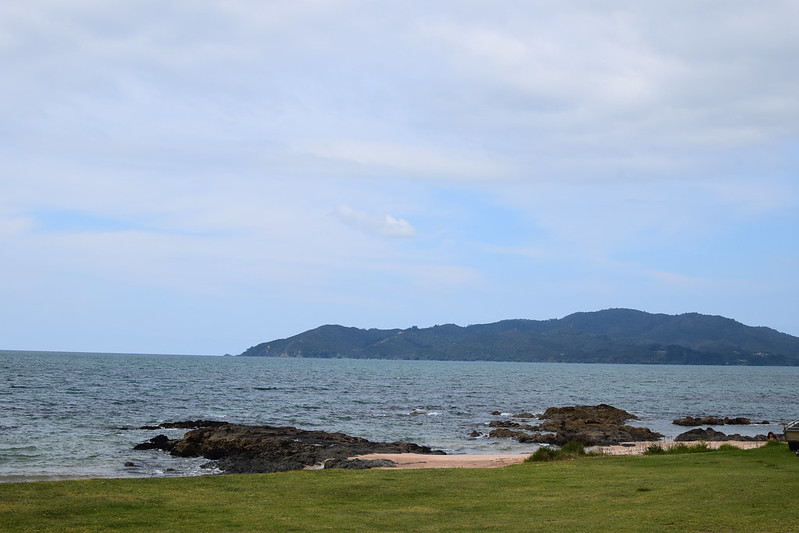 Cape Reinga is a sacred spot for the Maori people, but I found my peace here at Tapotupotu. I’m glad I went to Cape Reinga, but I’m even more glad I took the time to stop here and regroup!

Come join me next time as I start my journey back South. See you then :)